+447482877761
ArchaeProfile: A Database of Archaea and their Origins of Replication | OMICS International

ArchaeProfile: A Database of Archaea and their Origins of Replication

Copyright: © 2015 Ojha KK, et al. This is an open-access article distributed under the terms of the Creative Commons Attribution License, which permits unrestricted use, distribution, and reproduction in any medium, provided the original author and source are credited.

Archaea are single cell microorganisms having several unique characteristics which differentiate them from bacteria. One of the key features which make archaea distinct from bacteria is the replication process, which is very different and resembles that of the eukaryotes. In-vivo mapping of the ori site in Archae is a time consuming and tedious job due to complexity involved in the culture of archaeal colony, which puts challenges as well as opportunity to scientist to devise in-silico method to map the Ori site in archaeal genomes. Z-curve approach is a widely used insilico method to predict the Ori site in archaea, but it is not equally successful for all archaeal genomes. Several other parameters like copy number and location of the cdc6 gene, AT rich region with the presence of origin recognition boxes (ORB) provide a better estimate of the Ori site in archaea. The motivation behind development of Archae Profile database is to predict the location and the number of putative Ori sites in archaeal genomes based on purinepyrimidine ( R-Y) and amino-keto(M-K) disparity curve along with the consensus ORB sequences, cdc6 gene copy number, their location and upstream AT richness. Quick update cycle and easy browser interface makes Archae Profile distinct from other databases. Another important feature is the integration of tools for plotting disparity plot of a given genome sequence and finding specific repeats with copy number and location in a sequence. ArchaeProfile will be updated timely and the emphasis will be to integrate other tools for genome analysis as well as new search features in the database. Presently Archaea Profile has Ori related data of 122 archeal genome which is likely to increase with time.

Availability: ArchaeProfile can be accessed freely from http://www.bioinfommv.in/archaeprofile. Data available on the database could be used for further analysis and tutorial purpose.

New trends in next generation sequencing technology have led to a proliferation of sequenced genomes and hence put new challenges before the scientific community to store and analyse the new genomic data. Complete genome sequencing initiatives are biased toward prokaryotes because of their smaller genome size, short life cycle and ease of culture. In prokaryotes itself the number of total sequenced genome projects are skewed towards the bacterial genomes rather than archaeal ones due to complexity associated with the culture and specific growth requirement of the archaea. The same bias appears in the in-silico analysis of data available for archaea on the web. There are very few databases available which contain basic information related to archaeal genomes in a concise way.

Archaea are a unique domain of living organism which show the biochemical, structural and morphological similarity with bacteria but have detectable similarity with eukaryotes in some other aspects like the replication process [1,2]. Archaea were classified along with bacteria without any discrimination till 1977 when Carl Woese classified them on the basis of a phylogenetic tree based on 16s-rRNA as a separate group of prokaryotes [3,4]. Most of the archaea studied till now are extremophilic in nature [5]. Nevertheless there are a large number of representatives that survive in moderate environmental conditions [6]. The first sequenced archaeal genome was a methanogen, Methanocaldococcus jannaschii in 1996 [7]. Archaea are hard to culture which impacts their genome sequencing, and there are only 161 archaeal genome sequence available on Gene bank as compared to 14,914 total prokaryotic species till March 2013 (ftp://ftp.ncbi.nih.gov/refseq/release/release-statistics/microbial.acc_taxid_growth.txt). The same pattern is observed in the availability of archaeal data on web. There are several dedicated databases and repositories which are available for the exploration of bacterial genomic record but only a few are available for the exploration of archaeal genomes [8,9].

In ArchaeProfile database we have given R-Y and M-K disparity curves of 122 sequenced archaeal genomes available on NCBI. Furthermore a tool has also been incorporated within the database which can draw the nucleotide skew plot of the nucleotide sequence supplied by users. Another tool which is helpful in finding specific repeats and their position in nucleotide sequence, is also given in the database, this can be useful in detecting short and long repeats in the Ori site in archaeal genomes which are very common [10,11]. Genes associated with the origin of replication in archaea like cdc6 with the full description of the location and the copy number of the above genes is also available on the database, as the association of cdc6 gene with the change in sign of the of disparity curve is a good indicator to find Ori site in archaeal genomes. Further the location of Origin Recognition Boxes (ORB) is necessary as a confirmation of the detection of the Ori site in Archae [12]. In Archae Profile database we have given all experimentally verified ORB’s as well as in-silico predicted consensus ORB sequences and their location. The consensus ORB sequences were generated by multiple sequence alignment of predicted Ori region of closely related archeal genome sequences, and later on validated by matching conserved MSA region with in-vivo verified ORB of closely related archeal species if known.

Most of the genomic data is collected from NCBI. (http://www.ncbi.nlm.nig.gov/genomes). The disparity curves were drawn using an Octave script (http://www.gnu.com/) based on the method given by Zhang and Zhang [13]. The cdc6 location was sought in vicinity of the change of sign of M-Y or R-K disparity curve. The upstream and downstream sequence up to 2 Kb length was scanned for AT richness and the same was investigated for the presence of consensus ORB’s. As ORB sequences in archaea vary from species to species [14] and there are only few archaea for which the ORB sequences have been experimentally verified [12,15,16], we have used such sequences to find consensus ORB sequences in the closely related species using multiple sequence alignment. Presence of ORB sequence, cdc6 gene and AT rich region is a good indicator of Ori site in archaea.

Archaea Profile Ori site prediction results correspond with some of the in-vivo verified Ori site results. We have predicted three Ori site in Halobacterium species NRC-1 which have been confirmed by in-vivo studies [17]. 3 Ori sites is predicted by Archaea Profile in Sulfolobus sofataricus and Ori in Pyrococcus abyssi have been validated in-vivo experiment [18,19]. At Archaea Profile we have predicted single Ori in Thermococcales and Methanogens, three Ori site in Sulfolobales and Haloarchaea. Of course on some genomes we are totally unable to predict Ori site like Pyrobaculum calidifontis which has four in-vivo verified Ori site [20], nevertheless the coverage of Archae Profile Ori prediction is large and comprehensive.

Database was implemented on an open source Relational Database Management System MySQL (http://www.mysql.com) which allows rapid accession of data, hassle free update and maintenance. There are three relation tables which carries the whole record of the database (Figure 1). First table contains the data related to the archaeal species having the genome information and other numeric values. Each tuple contains the record of a single archaeal species. The second table consist of the GC graph in BLOB data type, which makes relation by NCBI-ID with first table. The third table contains the cdc6 and ORB record of all archaeal species. The outer web interface of the database for the remote user has been designed using PHP (http://www.php.net) for easy integration with database. It provides various options to search the database such as search by NCBI ID, search by Archaeal species name and search by class. Extensive module of Java (http://www.java.com) has been implemented for the real time help on the search page. AJAX library has been used to show the possible hits match with the database content submitted by user. 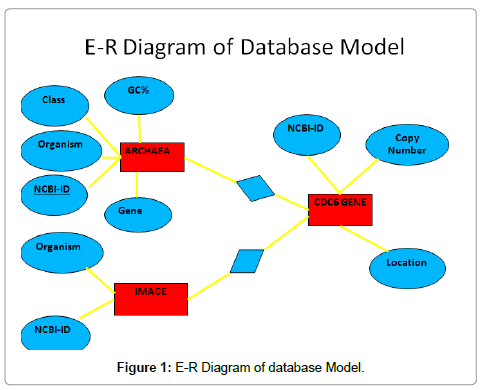 A disparity plotter based on BioPHP (http://www.biophp.org/minitools/skews/), and available in the public domain was also implemented with the database through which user can draw the disparity plot of any given DNA sequence up to 5 MB. The repeat finder tool has been developed on PHP and capable of parsing sequence nucleotide and protein sequence to find the exact location and copy number of a user defined pattern.

Several excellent databases have already been developed for prediction of Ori sites in prokaryotes particularly in archaea. Excellent example are DoriC [21-23] and Oriloc of Comparative Genometrics [9] databases, but their coverage is not exclusively for archaeal genomes. More than that they do not have tools integrated to draw disparity plots and find the repeats (In form of ORB’S). The Archae Profile database is exclusively for archaea, with integrated tools to draw disparity plot of user choice sequence and finding the specific repeats with their corresponding location and copy number. An important facet which makes Archae Profile distinct from other databases is update frequency, we cover almost all sequenced archaeal genomes till date and information is immediately updated on Archae Profile as soon as the complete sequence is available on Gene bank. Archae profile also has information related to some genes like Mini Chromosome Maintenance and Polynuclear Cell Nuclear Antigen, which is involved in replication of the archaeal genomes, is also given.

We will continue to incorporate new data related to archaeal genomes as it becomes available and update existing fields in the Archae Profile Database. With the expanded use of next-generation sequencing technologies, tracking updates to enhance accessibility and visualization of new functional data will be of growing importance. We are also implementing tools to find all possible repeats of desired length by calling octave library in PHP. The Archae Profile database will continue to focus on incorporating novel approaches to map Ori site in archaea.