ISSN: 2469-4134
Journal of Remote Sensing & GIS
Make the best use of Scientific Research and information from our 700+ peer reviewed, Open Access Journals that operates with the help of 50,000+ Editorial Board Members and esteemed reviewers and 1000+ Scientific associations in Medical, Clinical, Pharmaceutical, Engineering, Technology and Management Fields.
Meet Inspiring Speakers and Experts at our 3000+ Global Conferenceseries Events with over 600+ Conferences, 1200+ Symposiums and 1200+ Workshops on Medical, Pharma, Engineering, Science, Technology and Business

Copyright: © 2016 Cheruto MC, et al. This is an open-access article distributed under the terms of the Creative Commons Attribution License, which permits unrestricted use, distribution, and reproduction in any medium, provided the original author and source are credited.

The surface of the earth is undergoing rapid land-use/land-cover (LULC) changes due to various socioeconomic activities and natural phenomena. The main aim of this study was to gain a quantitative understanding of land use and land cover changes in Makueni County over the period 2000- 2016. Supervised classification-maximum likelihood algorithm in ERDAS imagine was applied in this study to detect land use /land cover changes observed in Makueni County using multispectral satellite data obtained from Landsat 7 for the years 2000, 2005 and 2016 respectively. The County was classified into seven major LU/LC classes viz. Built up areas, croplands, water bodies, evergreen forests, bush-lands, grassland and bare-land. Change detection analysis was performed to compare the quantities of land cover class conversions between time intervals. The results revealed both increase and decrease of the different LULC classes from 2000 through to 2016. Significant shifts from some classes to others was also observed. Drivers of the observed changes ranged from Climatic factors such as rainfall and drought to socio-economic factors. Consistent LULC mapping should be carried out in order to quantify and characterize LULC changes. This will help establish trends and enable resource managers to project realistic change scenarios helpful for natural resource management.

LULC change is a major issue of concern with regards to change in the global environment [1]. The rapid growth and expansion of urban centres, rapid population growth, scarcity of land, the need for more production, changing technologies are among the many drivers of LULCC in the world today [2]. According to Ref. [3], LULCCs respond to socioeconomic, political, cultural, demographic and environmental conditions and forces which are largely characterized by high human populations. LULCC has become one of the major concerns of researchers and decision makers around the world today.

Many researchers argue that LULCC emerged as a major aspect in the wider debate of global change; and that change originates from human-induced impacts on the environment and their implications for climate change [4-6]. The indicators of these changes can be clearly seen in the current major global concerns such as increasing concentrations of carbon dioxide (CO2) in the atmosphere, loss of biological diversity, conversion and fragmentation of natural vegetation areas and accelerated emission of greenhouses gases [7].

LULC dynamics are widespread, accelerating, and significant processes majorly impelled by human actions and at the same time resulting to changes that impact human livelihood [8]. The LULC dynamics modify the availability of different important resources including vegetation, soil, water, and others [9,10].

Due to rising population over the years, lots of pressure has been imposed on the land resources in Kenya where approximately 75% of the populace engages in agriculture but only 20% of its land is arable. As a result, the shortage of arable land has led to expansion of cultivation into the wetter margins of rangelands, deforestation and decline of grassland as a result of overgrazing, charcoal burning and other unsustainable land uses. These actions have far reaching implications on the integrity of natural resources and ecosystems in the country [11,12].

LULCCs has also taken place in Makueni County over the years. Land has been subjected to a lot of pressure due to over-reliance on its resources. There has also been rapid population growth in the county in the recent past and this has translated to over-utilization of land and its resources. Most communities are farmers and they therefore depend on land for their livelihood well-being and sustenance. However, the county is located in ASALs and thus the environmental and climatic conditions are not favorable for crop production. This has resulted to the locals engaging in other sustenance activities such as charcoal burning, logging and even sand harvesting, all of which result to environmental degradation.

Makueni County covers an area of 8,034.7 Km2. The county lies between Latitude 1°35´ and 3°00 South and Longitude 37°10´ and 38°30´East [13]. The map boundary for this area stretches in a north west to south east direction (Figure 1). The County boarders Kajiado, to the West, Taita Taveta to the South, Kitui to the East and Machakos County to the North. The county lies in the arid and semi-arid zone in Eastern Kenya. It consists of hills and small plateaus rising between 600-1900 metres above sea level (masl) [13,14]. 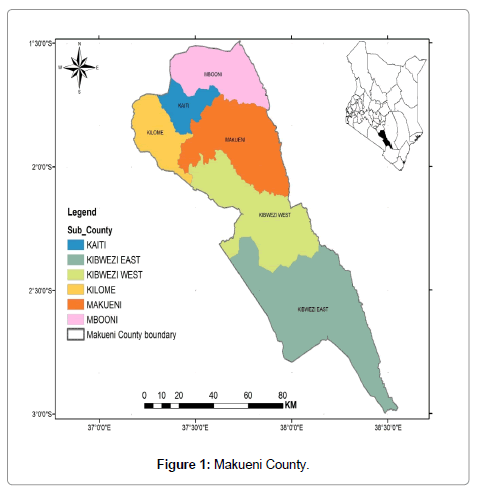 Two types of data were used in this research. Satellite data that comprised of three years multi- temporal satellite imageries (LANDSAT 7 imageries of 2000, 2005 and 2016) for the month of February acquired from the USGS GLOVIS website (Table 1). Ancillary data included the ground truth data for the LU/LC classes. The ground truth data was in the form of reference points collected using Geographical Positioning System (GPS) for the 2016 image analysis, used for image classification and overall accuracy assessment of the classification results.

Pre-processing of satellite images before detection of changes is a very vital procedure and has a unique aim of building a more direct association between the biophysical phenomena on the ground and the acquired data [15]. Data were preprocessed in ERDAS imagine for geo-referencing, mosaicking and sub-setting of the image on the basis of Area of Interest (AOI). The main objective of image classification is to place all pixels in an image into LU/LC classes in order to draw out useful thematic information [16]. Image classification was done in order to assign different spectral signatures from the LANDSAT datasets to different LULC. This was done on the basis of reflectance characteristics of the different LULC types. Different color composites were used to improve visualization of different objects on the imagery. Infrared color composite NIR (4), SWIR (5) and Red (3) was applied in the identification of varied levels of vegetation growth and in separating different shades of vegetation. Other color composites such as Short Wave Infra-red (7), Near Infra-red (4) and Red (2) combination which are sensitive to variations in moisture content were applied in identifying the built-up areas and bare soils. This was supplemented by a number of field visits that made it possible to establish the main land use land cover types. For each of the predetermined LU/LC type, training samples were selected by delineating polygons around representative sites. Spectral signatures for the respective LU/LC types derived from the satellite imagery were recorded by using the pixels enclosed by these polygons. A satisfactory spectral signature is the one ensuring that there is ‘minimal confusion’ among the land covers to be mapped [17]. Maximum Likelihood classifier (MAXLIKE) scheme with decision rule was used for supervised classification by taking 89 training sites for seven major LU/LC classes. The number of training sites varied from one LU/LC class to another depending on ease of identification and the level of variability. The Maximum Likelihood Classification is the most widely used per-pixel method by taking into account spectral information of land cover classes [1]. The delineated LU/LC classes were; built up areas, water bodies, croplands, evergreen forests, bush-lands, grasslands and bare-lands as described in Table 2. Figure 2: LU/LC Classification map of the study area for the year 2000. Figure 3: LU/LC Classification map of the study area for the year 2005.

The overall classification accuracy was 88.0%. The study area was defined to have seven land use and land cover categories, which were: Water Bodies, Grassland, Forest, Cropland, Bush-land, Built up Area and Bare-land. The land use land cover classification for 2000 is shown in Figure 4. Figure 4: LU/LC Classification map of the study area for the year 2016. 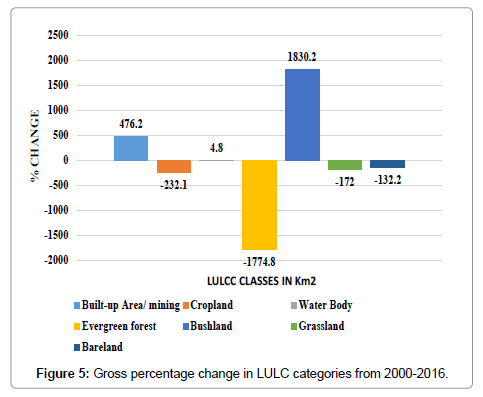 Land use and land cover analysis: The result of this study showed that built up areas, water bodies and bush-lands increased from 160.7 km2, 1.1 km2 and 2159.77 km2 in 2000 to 644.57 km2, 5.77 km2 and 3893.27 km2 in 2016 respectively. Croplands, evergreen forests grasslands and bare-lands decreased during this period with evergreen forests decreasing the most from 39% coverage in 2000 to 17% coverage in 2016 (Table 5). These changes took place at the expense of other LU/ LC classes as seen in the change detection matrices (Tables 3 and 4). LU/LC changes are complex and at the same time interrelated such that the expansion of one LU/LC type occurs at the expense of other LU/ LC classes [20,21]. The results of this study agrees with the results of other studies. In their study in Dembecha area, northwestern Ethiopia, Ref. [22] found out that the expansion of cultivated land took place at the expense of forest land between 1957 and 1982. Similarly, recent researches have revealed that the expansion of agricultural land has been at the expense of lands with natural vegetation cover [6,23-26].

In this work, it was proven that the supervised classification of multi-temporal satellite images is an effective tool to quantify current land use as well as to detect changes in a changing environment. Landsat 7 satellite images of 2000, 20005 and 2016 were used for the GIS and RS image analysis. The observed changes varied from one LU/LC category to another with some maintaining a constant change (increase or decrease) over the two analysis periods (2000-2005 and 2005-2016). Some classes underwent decrease in the first period and an increase in the second period and vice versa was true for other LULC categories. This study advocates that multi-temporal satellite data is very useful to detect the changes in land use and land cover comprehensively. Land use and land cover changes have wide range of consequences at all spatial and temporal scales. The study reveals that the LULC pattern and its spatial distribution are the major rudiments for the foundation of a successful land-use strategy required for the appropriate development of any area.