Copyright: © 2016 Mahmoud AA, et al. This is an open-access article distributed under the terms of the Creative Commons Attribution License, which permits unrestricted use, distribution, and reproduction in any medium, provided the original author and source are credited.

Objectives: Several candidate genes are implicated in the pathogenesis of type 2 diabetes mellitus (T2DM), one of which is interleukin (IL-10). In this investigation, we aimed to study the association between IL-10 (-592A/C) gene polymorphism with its level in T2DM with and without nephropathy.

Results: Our results revealed no significant differences in IL-10 (−592A/C) genotypes distribution between the two groups of T2DM patients. IL-10 levels were found significantly elevated in diabetic nephropathy patients compared to T2DM without nephropathy (P<0.05) and were positively correlated to the degree of albuminuria (r=0.61, P<0.01). IL-10 levels increased in IL-10- (−592C/C) genotype compared to IL-10-(−592A/A) and IL-10- (−592A/C) genotypes in diabetic nephropathy patients while such difference was not found in T2DM patients without nephropathy.

Conclusion: IL-10 (-592A/C) gene polymorphism and IL-10 level play a role in the pathogenesis of nephropathy in T2DM.

Type 2 diabetes mellitus (T2DM) is one of the main chronic diseases and its complications have become a major cause of morbidity, mortality, and disability in the World [1]. Diabetic nephropathy (DN) is the leading cause of chronic kidney disease in renal replacement therapy patients and affects about 40% of diabetic patients [2]. DN was defined as diabetes with the presence of albuminuria or impaired glomerular filtration rate (eGFR<60 mL/min/1.73 m2) [3]. Diabetes is an immune dependent disease in which the pattern of cytokine expression is changed. However, up to date, the mechanism of the disease is still not fully understood, in recent years, published data showed that genetic polymorphisms might explain individual differences in T2DM risk [4]. Several candidate genes are implicated in the pathogenesis of T2DM, one of which is interleukin (IL-10). IL-10, an 18-kDa glycoprotein plays a key role in homeostatic control of inflammatory and immune responses. It is produced by T-helper 2 (Th2) cells and a wide variety of cell types including B cells, monocytes, macrophages, keratinocytes, and many tumor cells [5]. Its gene was defined to be located on chromosome 1 and to have many polymorphic sites in the promotor region [6].The association of IL-10 in immunological disorders like multiple sclerosis, nephrotic syndrome and type-1 diabetes is well established [7]. In addition, high concentrations of IL-10 were found associated with severe sepsis protecting patients from death while low levels were found in nonsurvivors [8]. IL-10 polymorphic variants are linked with cytokine production and are involved in many chronic inflammatory diseases, including T2DM [9]. In this investigation, we aimed to study the association of IL-10 (−592A/C) gene polymorphism with IL-10 level in T2DM with and without DN.

The study included 100 patients with T2DM and diabetic nephropathy, 100 T2DM patients without nephropathy. The patients recruited from the internal medicine department of Sohag University Hospital. The diagnosis of T2DM was done according to the American Diabetes Association Criteria [10]. Written informed consents were obtained from all enrollees and the study was approved by the ethical committee of Sohag faculty of medicine. Morning urine samples were collected from all the patients and a spot urine albumin/creatinine ratio (ACR) was estimated by measuring both of albumin and creatinine in urine. Albumin was measured by Bromocresol Green albumin assay kit and creatinine was measured by Jaffe’ reaction. Albuminuria was defined if ACR ≥30 mg albumin/gm creatinine, and the albuminuria categories were as follows: microalbuminuria, ACR 30 to 299 mg albumin/gm creatinine and macroalbuminuria, ACR ≥300 mg albumin/gm creatinine [3].

Overnight fasting blood samples (5 ml) were collected from the patients and the controls via the venipuncture of an antecubital vein on Na2-EDTA (final concentration 1mg/ml) containing tubes. Samples were centrifuged at 1000 × g for 15 min at room temperature and the buffy coat was separated for DNA isolation using DNA isolation kit (illustra blood genomic Prep Mini Spin Kit, supplied by GE Healthcare), according to the manufacturer’s instructions. The DNA isolated using the kit has a characteristic band size of approximately 20 kb on an agarose gel. The yield of genomic DNA was measured by UV absorbance and the purity of it was measured by A260/A280 (about 1.8). Plasma was used for the estimation of; fasting blood sugar (FBG), total cholesterol (TC), HDL-cholesterol (HDL-C) and triglycerides (TG) and IL10. FBG, TC, HDL-C and TG were measured using Beckman Coulter AU Apparatus supplied by optics planet company CAT. NO. T05ZZ01Z0, USA. Glycosylated hemoglobin (HbA1c) was measured using hemolysate by colorimetric kit supplied by An EKF diagnostic Company, Texas, IL10 was measured using ELIZA kit supplied by R&D systems, Catalog Number HS100C. Genotype distribution was tested for HWE (Hardy–Weinberg equilibrium) by x2 analysis. The odd ratio (95% confidence interval) was calculated to test for the association between diabetic nephropathy and genotypes. Student’s t test and Kruskal-Wallis test was used to compare the differences between the patients. Results were expressed as mean ± SD or number and percent. A two-tailed value of P<0.05 was considered statistically significant. All statistical calculations were performed using the computer program SPSS (Statistical Package for the Social Science; USA).

The study included 100 T2DM patients without nephropathy and 100 T2DM with nephropathy. The clinical and laboratory data of the patients were represented in Table 1.

Table 2: Genotypes and alleles distribution in the two groups of patients. Abbreviation: OR: Odd Ratio.

Table 3: IL-10 level (pg/ml) according to genotype in the two groups of patients. Data were compared using Kruskal-Wallis test. 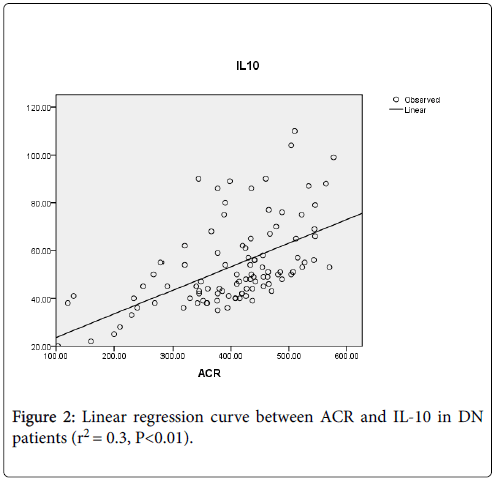 Diabetic kidney disease is one of the common causes of end-stage renal disease and premature death [12]. Although various therapeutic approaches, such as hypoglycemic agents, antihypertensive drugs, and renin-angiotensin system inhibitors, have been tried to slow the progression of nephropathy, the number of patients with diabetic kidney disease continues to rise with the prevalence of type 2 diabetes mellitus [13]. Anti-inflammatory and immune-suppressive factors, including IL-10 play an essential role in the pathogenesis of DN. These factors may slow down the course of diabetic nephropathy through a reduction of the inflammatory processes [8]. In this investigation, we examined IL-10 (−592A/C) gene polymorphism and IL-10 level in T2DM with and without DN. The results of the investigation revealed that IL-10 increased significantly in T2DM and DN patients compared to T2DM patients without nephropathy, however, no differences in IL-10 (−592A/C) genotypes distribution were found in the two groups of T2DM patients. IL-10 levels increased in IL-10- (−592C/C) genotype compared to IL-10-(−592A/A) and IL-10-(−592A/C) genotypes in DN patients while such difference was not found in T2DM patients without nephropathy. Similar to our findings, IL-10- (-592C/A) genotype distribution didn’t differ between T2DM patients with or without nephropathy and IL-10 (-592C/A) genotype revealed significant association with cytokine expressions in DN patients [9,14,15]. Twenty-eight polymorphisms occur in the promotor region of IL-10 gene, these polymorphisms were found to affect gene transcription and expression. The IL-10 (-592 A) allele was associated with decreased IL-10 expression compared to (-592 C) allele [16].

In our study, IL-10 levels were found elevated in DN patients compared to T2DM without nephropathy and were correlated to the degree of albuminuria. Similarly, IL-10 levels were found elevated and correlated to the degree of albuminuria in DN patients in a previous study [8]. The immune activation in DN does not seem to be dependent on antigenic stimulation, but appears to be a consequence of hyperglycemia. The advanced glycation end products (AGE), induce inflammatory immune responses that contribute to the growth of the cortical fibroblasts, collagen synthesis and damage to the proximal tubular epithelial cells. Mesangial expansion, the principal glomerular lesion in diabetic nephropathy, has also been found to be attributable to hyperglycemia related inflammation [8,17]. IL-10 might have a protective effect, reducing kidney injury as systemic treatment with IL-10 of non-obese diabetic mice was found to delay the onset of the DN. This may be achieved by a transfer of the favoring regulatory response dendritic cells [18] or by an induction of IL-10-producing regulatory CD4 + CD25 + cells. Another study showed that IL-10 can protect against renal damage in systemic lupus erythematosus due to the down-regulation of pathogenic Th1 responses [19]. IL-10 has a protective effect in anti-mouse glomerular basement membrane globulin-induced experimental crescentic glomerulonephritis, and the inhibition of IL-10 decreases renal function and is associated with worsening of histological features [20]. Experimental rats with chronically increased IL-10 levels after 5/6 nephrectomy show suppressed infiltration of inflammatory cells, decreased production of monocyte chemoattractant protein-1 and RANTES, and a significant reduction in mRNA for collagen type I and III in the remnant kidney. These phenomena result in a lower degree of proteinuria and a significant reduction in glomerular sclerosis and interstitial fibrosis [21]. IL-10 gene expression and IL-10-induced signaling pathways have an important role in the regulation and maintenance of normal renal function. However, in other cases, IL-10 was proved to aggravate defects in renal function and abnormal IL-10 expression, whether transient or prolonged, as well as interactions with other growth factors as a response to diverse stimuli, is linked to the appearance and progression of a variety of kidney disorders. It has thus been suggested that the selective targeting of IL-10 expression and IL-10-related pathways may provide therapeutic approaches for many kidney diseases [22]. In conclusion, our study revealed an association between IL-10 level and DN in T2DM patients, although, no association was found between IL-10 (−592A/C) gene polymorphism and DN but this polymorphism may affect IL-10 level in DN patients.