Atypical Presentation of an Organophosphorus Poisoning

Copyright: © 2015 Isacoff A. This is an open-access article distributed under the terms of the Creative Commons Attribution License, which permits unrestricted use, distribution, and reproduction in any medium, provided the original author and source are credited.

Organophosphorus (OP) insecticide self-poisoning is a major global health problem, with approximately 200,000 deaths each year. A 25 year old woman was transported to an emergency department for altered mental status. On physical examination, the patient appeared alert but not responsive. She vomited once prior to arrival in the ED, but otherwise had no muscarinic manifestations during her hospital course. It was later determined that she had intentionally ingested Orthene, a fireant killer made up of 50% acephate. Acephate is one of the few commercially available, over-the-counter organophosphorus insecticides in the United States. This patient had an erythrocyte cholinesterase level of 1957 IU/L (9572-15031) and serum cholinesterase of 164 IU/L (2673-6592). She was treated with intravenous pralidoxime and transferred to psychiatry after two days at which time her physical examination, including mental status, was normal. This case is unusual due to the paucity of muscarinic manifestations and clinicians need to be aware that this can occur.

Organophosphorus (OP) insecticide self-poisoning is a major global health problem, with approximately 200,000 deaths each year [1,2]. Approximately forty OP products are registered and sold in the United States; making it readily available for consumer purchase [3]. We present an unusual case of a patient who intentionally ingested an organophosphorus insecticide.

A 25-year-old female was transported to an emergency department for altered mental status. She was found unresponsive by family members at her home. During Emergency Medical Services transport, she reportedly had one episode of vomiting. On presentation to the emergency department, vital signs revealed a temperature of 97.7°F, pulse of 129 beats per minute, respiratory rate of 18 per minute, a blood pressure of 129/59 mmHg and an oxygen saturation of 100% on room air. On physical examination pupils were 2mm bilaterally and sluggish to react. Mucous membranes were moist. She was not diaphoretic. Cardiac examination revealed tachycardia with no murmurs or abnormal heart sounds. Her lungs were clear to auscultation bilaterally. There was no mention of hyperactive bowel sounds. She appeared alert but did not respond verbally. She had minimal spontaneous movement of all four extremities with no improvement upon prompting. The treating physician described her as having a “catatonic like” appearance.

The family did not know of any recent illnesses, fevers or ingestions. She was not on any new medications. Her past medical history was significant for depression for which she was on escitalopram 10 mg once daily. She also had a history of seizures as a child. There was no prior suicidal ideation and no prior suicide attempts reported. No medication allergies were reported. 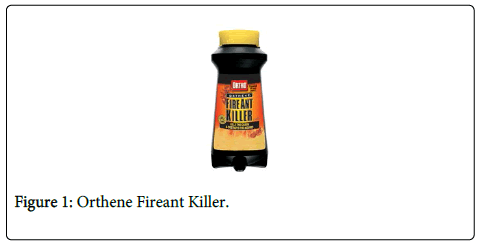 One dose of pralidoxime, 1 gram, was given intravenously in the emergency department. Atropine was not given as there were no obvious muscarinic effects. The patient was admitted to the intensive care unit with normalization of mental status at 24 hours after initial presentation. She was then transferred to the general medicine floor and was transferred to inpatient psychiatry 48 hours after initial presentation. Of note, her erythrocyte cholinesterase level was found to be 1957 IU/L (9572-15031), and serum cholinesterase was 164 IU/L (2673-6592). These results became available approximately 48 hours after presentation.

With over 100 insecticides in existence, OP self-poisonings account for roughly 30% of suicides around the world annually [1,2]. OP poisoning results in cholinergic stimulation at nicotinic and muscarinic receptor sites. Muscarinic manifestations are commonly described and include diarrhea, urination, miosis, bronchospasm, bronchorrhea, emesis, lacrimation, and salivation. (hence the mnemonic “dumbbells”). A small percentage of cases may exhibit signs of sympathetic stimulation [3]. Nicotinic effects on sympathetic ganglia receptor sites can result in mydriasis, tachycardia and hypertension. Nicotinic effects at the neuromuscular junction may result in fasciculations, muscle weakness, and occasionally paralysis [1,4]. Commonly described central nervous system manifestations include agitation, confusion, and coma.

The patient described in this report had an atypical presentation of OP toxicity, particularly with respect to the paucity of muscarinic manifestations. She also presented with sinus tachycardia, which is likely due to sympathetic ganglia stimulation. Clinicians need to be aware that such presentations of OP toxicity can occur [5]. Our patient appeared alert but did not respond verbally. Although these findings appeared unusual, they are consistent with the commonly described findings of altered mentation seen in patients with OP toxicity.

Antidotal treatment of patients with suspected OP toxicity usually must be initiated empirically based on clinical suspicion, as confirmatory diagnostic testing through erythrocyte and serum cholinesterase levels may take some time [6]. These tests are generally performed in referral laboratories

Antidotal therapy of OP toxicity includes the administration of an antimuscarinic agent, usually atropine [5,7]. The main indications to use this drug are the presence of bronchorrhea, bronchospasm, and subsequent hypoxia [5]. Atropine was not administered in the case described here as these manifestations were absent.

An oxime, usually pralidoxime, is administered to enhance the regeneration of phosphorylated acetylcholinesterase. Earlier administration is desirable, as the phosphorylated acetylcholinesterase ultimately becomes “aged”, and unresponsive to oximes [5]. Observation for approximately 24 hours after discontinuation of all antidotal therapy allows for the detection of delayed onset of toxicity, particularly with fat soluble OP’s [8]. Cases have been reported of delayed toxicity related to redistribution from fat stores.

A decrease in blood cholinesterase may indicate exposure to organophosphorus compounds. Decreases in serum cholinesterase are generally rapid, with a slower decline of erythrocyte cholinesterase. 5 Eighty two to ninety five percent of acephate ingested is excreted into the urine. Due to the small amount of acephate that is metabolized prior to excretion, acephate can be measured in human urine.8

Acephate has been characterized as an agent with low mammalian toxicity, but one case report describes a four year old who had a complicated 32 day hospital course after ingestion. The details of the patient’s course after discharged are not noted. Our patient had a relatively short hospital course with a good outcome.