Autologous Transplantation of the Neurosensory Retina for Refractory Macular Holes

Macular holes (MHs) are small breaks in the macula, which is located in the center of the eye’s light-sensitive tissue. These breaks severely impact the patient's central vision [1]. Advances in pars plana vitrectomy (PPV) and inner limiting membrane (ILM) peeling have been shown to improve both success rate and outcome [2]. Currently, numerous procedures have been reported to effectively treat MHs [3-5], such as autologous transplantation of the ILM or lens anterior capsule, and ILM flap inversion. However, intervention using these procedures is limited in some cases, specifically when refractory macular holes have diameters exceeding 1000 μm. Therefore, we propose novel procedure-autologous neurosensory retinal free flap transplantation as a means of treating large macular holes. 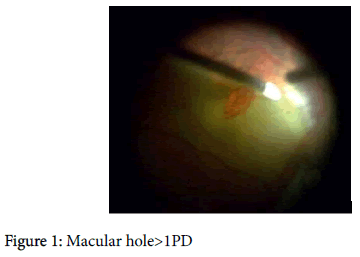 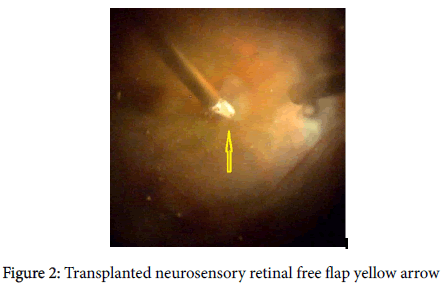 Using triamcinolone staining, we removed the posterior vitreous cortex (PVC). Next, the proliferative membrane and residual ILM were peeled using indocyanine green (ICG) staining before removing the proliferative strips on the surface of and surface under the retina. The retina was incised at areas of high tension. After fluid-gas exchange, an oval MH was observed at nearly the size of the optic disc. The ICG stain allowed us to mark the neurosensory retina to nearly the size of the MH and avoid the main vasculature at the inferotemporal region. Intraocular vertical scissors were used to remove the full-thickness neurosensory retinal free flap in this region and gently move it to the MH. A laser was used to seal the site edges and direct silicone oil exchange was performed. The patient maintained prone position for one month after the operation.

The silicone oil was removed three months after surgery. The patient’s visual acuity was HM/20 cm at this time, while a fundus examination revealed retinal attachment consistent with the MH (Figure 3). Optical coherence tomography (OCT) showed the neurosensory free flap was consistent with the retina, except for the temporal side. However, the structure was disrupted in the photoreceptor layer (PRL). 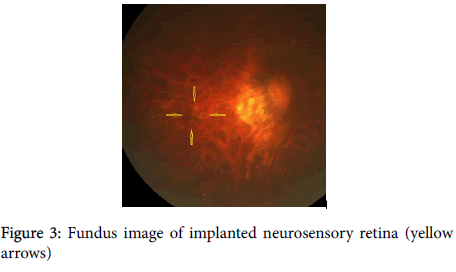 It is very difficult to close large macular holes (>1000 μm) using PPV and ILM peeling alone [6,7]. Recent reports on the use of ILM inversion, ILM filling and lens anterior capsule filling could provide a cure for MHs, as well as reduce the risk of retinal detachment [4,5]. However, ILM and lens anterior capsule filling are impractical in some cases, such as when attempting to cover MHs that are as large as the optic disc, when treating patients who have undergone ILM peeling, or when treating those who have a transparent lens (Figures 4 and 5). 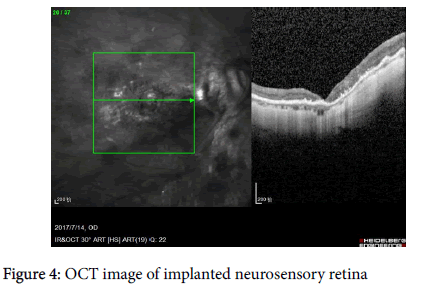 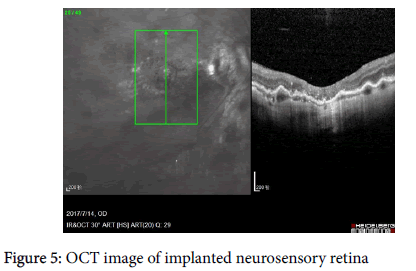 Morphologically, the neurosensory retinal free flap we cut had almost the same dimensions as the MH. A relatively closed environment was formed in the MH, which allows for excellent filling and repair. Through the active transport of pigment epithelium, the liquid under the retina was transferred out of the MH, promoting retinal attachment and facilitating the closure of the MH. When compared to the tissue of the ILM or the lens anterior capsule, the neurosensory retina heals more easily with the surrounding retinal tissue due to high histocompatibility. Additionally, the free flap of the neurosensory retina has the same thickness as the surrounding retina, which is more conducive to the recovery of the anatomical structure.

Analysis of the postoperative MH OCT indicates that apart from a small gap on the temporal side, the sides of the MH have healed. The implanted neurosensory retinal free flap form anastomoses well with surrounding retina, from the nerve fiber layer (NFL) to the outer nuclear layer (ONL). Unfortunately, inner segment (IS)/outer segment (OS) layers cannot be found OCT. A large sample size study and longterm follow-ups are required to investigate whether the transplanted neurosensory retinal tissue has visual function.

Copyright: © 2018 Wu M, et al. This is an open-access article distributed under the terms of the Creative Commons Attribution License, which permits unrestricted use, distribution, and reproduction in any medium, provided the original author and source are credited.