Copyright: © 2015 Kataoka Y, et al. This is an open-access article distributed under the terms of the Creative Commons Attribution License, which permits unrestricted use, distribution, and reproduction in any medium, provided the original author and source are credited.

The purpose of this investigation was to examine the bactericidal activity of long lifetime ozone water (LLO water) against pathogenic bacteria of medical, veterinary, and public health interest. An electrolytic system using Pt mesh electrodes combined with a conventional polymer electrolyte, the Nafion 117 membrane, produced LLO water from tap water with high efficiency. LLO water killed 7.144 ± 0.0507 log10 CFU of Escherichia coli O157:H7, 6.979 ± 0.045 log10 CFU of methicillin-resistant Staphylococcus aureus, 6.503 ± 0.3681 log10 CFU of Pseudomonas aeruginosa and 6.579 ± 0.123 log10 CFU of Legionella pneumophila within one minute. In contrast, endospores of Bacillus anthracis were killed within 20 min. Results of observation of the bactericidal activity of LLO by using an electron microscope, it was revealed that LLO water was shown the bactericidal action by swelling and destroying on the cell wall of the bacterial cells. Our studies demonstrated that LLO water has the potential to be widely applicable in food hygiene, medicine and veterinary medicine as a sterilizing agent. This is the first study to demonstrate the bactericidal activity and characteristics of LLO water.

Functional water produced by electric systems, such as electrolyzed water, has been widely used as a safe and low cost bactericidal water compared with disinfectants. Bactericidal electrolyzed waters, which consist of acidic and alkaline water, are usually produced by addition of 0.1% NaCl. However, if strong acidic electrolyzed water or astrong alkali electrolytic water is generated, those that contain few amount of sodium hypochlorite (NaClO) as one of the disinfectant [1]. We have developed a new electrolytic water generated by the system to direct electrolysis of tap water [2]. This electrolyzed water, named longlifetime ozone water (LLO water), has a neutral pH and contains high concentrations of ozone and hydroxyl radicals, without NaClO [2]. Hydroxyl radicals produced by the decomposition of ozone water are one of the strongest oxidizers. Ozone can be used instead of chlorine as an effective water disinfectant and is able to inactivate many human pathogenic bacteria which are Bacillus cereus, Escherichia coli, Legionella pneumophila, Mycobacterium fortuitum, Pseudomonas fluorescens, Salmonella enteritidis, S. typhimurium and Staphylococcus aureus [3]. However, some protozoa, fungi and spores require a longer time of contact with ozone than bacteria and viruses [3-6]. The LLO water is long-lifetime ozone water; therefore, it is possible to inactivate many pathogenic agents of medicine, veterinary medicine and public health concern.

In the medical science, major etiological agents of nosocomial infections include methicillin-resistant S. aureus (MRSA), multidrugresistant P. aeruginosa (MDRP) and L. pneumophila [7-9]. These organisms are particularly problematic because of their ubiquitous nature, ability to survive in the hospital environment, and innate resistance to many antibiotics and antiseptics. Bacillus anthracis is a highly pathogenic bacterium that causes anthrax and has been associated with deliberate contamination events [10]. Other Bacillus spp, B. cereus and B. subtilis , are endosporeformers that are widespread in the environment. There is the possibility that long-term use of disinfectants to eliminate these causative agents of nosocomical infections can result in environmental pollution. In contrast, electrolyzed water with bactericidal activity eventually changes into water with the passage of time. Stevenson et al. reported that the effect of storage of electrolyzed oxidizing (EO) water [11]. In their results, when stored in the dark, bactericidal efficacy was retained for at least 180 hours. Therefore, electrolyzed water can be applied to clean up the environment in the hospital as well as the environmental pollution caused by bioterrorism. The purpose of our investigation was to examine the bactericidal activity of LLO water against pathogenic bacteria in the medical, veterinary, and public health fields. We observed by optical microscope and electron microscope how LLO water was acted against bacterial cells. Moreover, the characteristics of LLO water were determined by carrying out dilutions and limited values.

Long-lifetime ozone (LLO) water produced by an electrolytic system using a felt separator was described previously [2]. This electrolytic system using platinum (Pt) mesh electrodes combined with a conventional polymer electrolyte, the Nafion 117 membrane, produced a high efficiency LLO water from tap water directly. The LLO water had a neutral pH (pH 5.5 to 7.0), contained high levels of hydroxyl radicals, and did not contain residual chlorine or NaClO. Chlorhexidine (CHG, Sumitomo Pharmaceuticals co. LTD, Osaka, Japan) at a concentration of 0.05% was used as a positive control for bactericidal activity and distilled water was used as a negative control.

Bactericidal tests of LLO water were performed by using a modification of the procedure used to test bactericidal activity of disinfectants [12]. Two hundred μl of each bacterial suspension was mixed with 20 ml of LLO water, 20 ml of 0.05% chlorhexidine or 20 ml of distilled water as controls, and the mixtures were maintained for 1, 2, 3, 5 and 10 min at room temperature. One hundred μl of this mixture was taken at various time points, and 5 ml of 0.5% sodium thiosulfate stop solution was added. The treated bacterial samples were cultured on heart infusion agar at 37°C for 24 hrs, except L. pneumophila, which was grown on B-CYE agar at 35°C for 48 hrs. After incubation, the bactericidal activity of LLO water was determined by counting the number of bacterial colonies and comparing the CFUs with those of the samples that were treated with disinfectant and distilled water.

Determination of the limits of bactericidal activity of LLO water

To determine whether LLO water was active with higher concentrations of cells, how long the LLO water retained bactericidal activity, bactericidal tests were carried out with more concentrated cell suspensions, with LLO water that had been left at room temperature. Suspensions of E. coli and S. aureus overnight cultures were adjusted to approximately 107 to 108 CFU/ml. Bacterial solutions were diluted from 2 to 8-fold with 0.85% NaCl. Bctericidal test was performed as described above and distilled water was used as the negative control. LLO water was produced by the electrolytic system and left at room temperature for 3, 6 and 24 hours. The bactericidal activity of the LLO water was examined to determine whether it retained antibacterial capability using E. coli .

The bactericidal and sporicidal activities of LLO water were determined with 3 replications. Statistical significance was determined by chi-square analysis, and P<0.05 was considered significant.

* P <0.005; a: Values are means ± standard deviation of triplicate determinations.

* P <0.005; a: Values are means ± standard deviation of triplicate determinations. 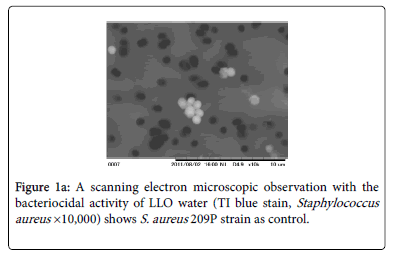 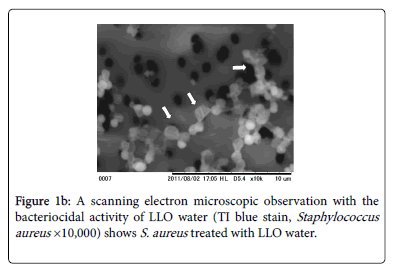 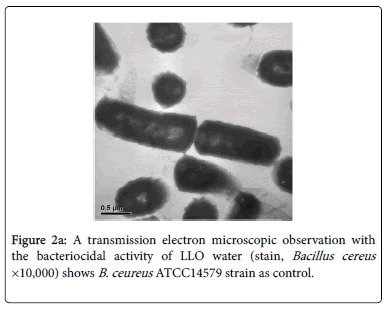 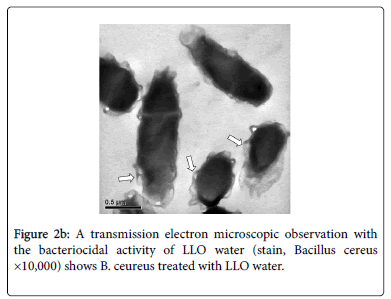 LLO water, which was produced from tap water, was shown to work as well as bactericidal disinfectants against various pathogenic bacteria found in medical and public health settings. In addition, LLO water had bactericidal activity against endospores of B. anthracis , which have been used as an agent of biological terrorism in recent years. Based on these findings, LLO water may be widely applicable in food hygiene, medicine and veterinary medicine as functional water. The characteristics of LLO water include a neutral pH, the same ion concentration as tap water, no sodium hypochlorite, >0% ozone concentration, and a lifetime>150 hrs [2]. In contrast, acidic electrolyzed water has a pH of 2 to 3, and an active chlorine content of 10 to 90 ppm; basic electrolyzed water has a pH of 10 to 13 and an oxidation-reduction potential of -800 to -900 mV [1]. However, acidic electrolyzed water and basic electrolyzed water show a high potential for application in the agriculture and food industries as an environmentally friendly disinfection agent. Thus, LLO water is not limited to industrial applications such as agriculture and food; a wide range of applications could be expected in fields including medical and veterinary medicine, and food hygiene.

In addition to the pH of LLO water, the ORP values should also be taken into consideration. This ORP can be used as an indicator of the ability of electrolyzed water to oxidize or reduce compounds in the bacterial cell wall. The corresponding high ORP has been associated with the strong bactericidal activity of Electrolyzed water [13]. Solutions with high ORP values can induce modifications to bacterial membranes by causing changes to the cell’s electron flow [14]. In this study, the ORP values of the LLO water was about +1000 mV, and had been maintained for 6 hours. Therefore, it was revealed that the bactericidal activities of LLO water had been at least 6 hours could be kept.

When the effect on the bacteria was observed using electron microscopy, LLO water was found to destroy bacterial cell walls. This observation suggested that free radicals are produced from ozone, which is the main component of LLO water, and cell wall damage was caused by free radicals, resulting in cell lysis in response to the osmotic pressure. In contrast, acidic electrolyzed water produced from a dilute sodium chloride solution has a similar bactericidal effect as the disinfectant sodium hypochlorite [15]. Therefore, it is clear that the bactericidal effect of LLO water is due to the ozone and radicals generated by electrolysis of tap water.

In our current study, we have demonstrated the bactericidal and sporicidal activities of LLO water. The effect of LLO water as a disinfectant is attenuated by incorporation of organic matter, which is similar to findings with disinfectants. However, the fact that inactivated LLO water becomes mere water would allow its use in a wide range of applications without the possibility of polluting the environment. In the future, we will explore additional applications of LLO water.