Copyright: © 2015 Shintani H. This is an open-access article distributed under the terms of the Creative Commons Attribution License, which permits unrestricted use, distribution, and reproduction in any medium, provided the original author and source are credited.

Gas plasma sterilization technique is a relatively new technology found in 1970. Since then mostly engineering researchers studied by self-made equipment. Therefore, data is not reproducible and has many mistakes due to lack of microbiology and chemistry. From 2000, microbiologists and chemists have word together, somewhat mistaken have been disappeared, but still remain in sterilization filed.

Gas plasma sterilization method has a benefit to attain both SAL (sterility assurance level) of 10-6 and material/functional compatibility in success. On the contrary current sterilization procedures such as gamma-ray, electron beam, autoclaving, dry heating, ethylene oxide gas, and hydrogen peroxide gas can attain SAL of 10-6, but failed to attain material/functional compatibility, so the real marketing of the gas plasma sterilizer is keenly desired.

The tailing phenomenon (Figure 1) is due to clumping (multilayer of microorganisms) as biological indicators they used are self made and 106 CFU (colony forming unit)/carrier is inoculated too narrow space, therefore it is easy to form clumping (multilayers). Gas plasma sterilization has a penetration depth of ∼10-20 nm, so it is an ability to destroy one surface layer, but the destruction of the second, third or fourth layer delayed due to interference of the first layer. This is the reason survivor curve of the gas plasma sterilization presents tailing (curved survivor curve) (Figure 1). This story is especially referred when biological indicator (BI) consisting Geobacillus stearothermophilus ATCC 7953. Geobacillus stearothermophilus ATCC 7953 is the most tolerable endospore to gas plasma sterilization, so it can be speculated that if BI is sterilized, other bioburden (number and sorts of viable microorganisms in or on the products) can be speculated to be killed without experimental confirmation. The real target in the real sterilization is not BI, but bioburden. The scattered phenomenon of bioburden does not form clumping, so in the real sterilization the survivor curve is straight due to lack of clumping. In the same meaning, when used one layer scattered BI, tailing phenomenon (curved straight line) did not observe. This required in ISO 11138-1 that the coefficient relationship of straight survivor curve must be greater than 0.8 (ISO 11138-1 Annex B, Normative Annex), indicating curved survivor curve is not approved officially. In that sense, engineering researcher’s data are invalid. They discuss these curved survivor line from the difference of kinetics and they explained initial straight line is first order and the next curved line is second order and next straight line is from first order and so on. They calculated D values from each kinetic, indicating there exists more than one D value per one microorganism, which is out of discussion from microbiology and sterilization study. 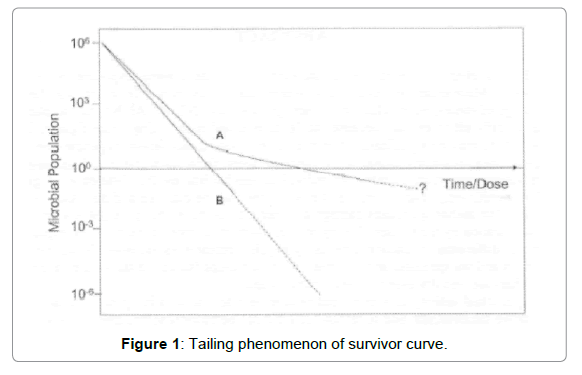 Even though gas penetration depth of gas plasma sterilization is quite shallow ∼10-20 nm, but this penetration is sufficient to kill bioburden as bioburden scattered in the product surface, so no clumping formed. According to authority, they require 6 log reduction. This does not indicate from initial population of 106 CFU/carrier to SAL Of 10°, but initial population of bio-burden level of 10° CFU to SAL of 10-6 (Figure 2). Anyhow in all sterilization procedures SAL of 10-6 is required, this requirement is reasonable. SAL of 10-6 considers the closest zero in ISO 11137-1 If the 6 log reduction from 10° CFU/carrier to SAL of 10-6 can be conducted, it is no clumping, therefore no tailing and this sterilization is quite realistic. The authors studied fallen microorganisms at dialysis room of the healthcare facility in Nagoya, Japan and found 40-50 CFU/500L of airborne microorganisms and 2-3 CFU/plate as fallen microorganisms. Fallen microorganisms have a resemble concept as the bioburden, so I consider that the bioburden is a few CFU/ carrier in real and dirty circumstances. 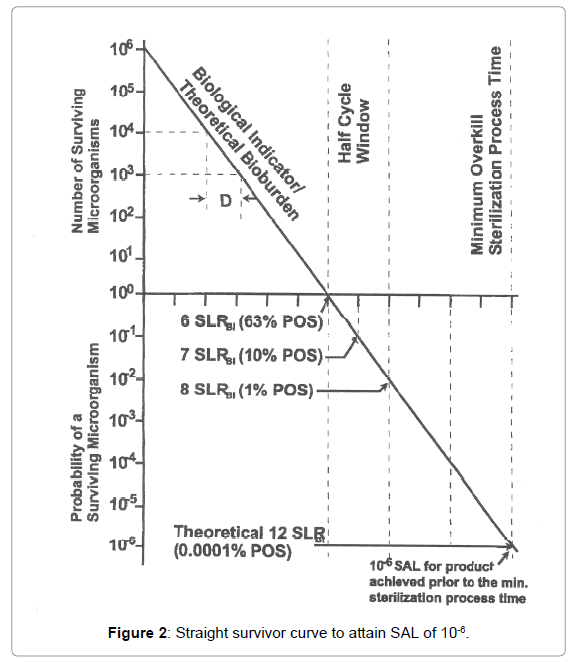 The mechanisms of gas plasma sterilization have been studied from 1970 to now, but defined mechanisms are still unclear. We studied that ion and electrons are out of discussion because outer layer of spore, gram negative and gram positive microorganisms are ionic (Figure 3), so interfere at the outer layer, so ionic and electronic ones are out of discussion. UV and VUV are also discussed their possibility to gas plasma sterilization, but finally defined their contribution were also minor, even though not at all. The rest are radicals and metastables (Figure 4). Radicals such as OH, NH, O, OOH, OONO and so on are quite short-lived at around μ second and the flight distance during life period is 0.003 cm/μ second, so their contribution is not major, but minor. On the contrary, metastable has a so and so life period of 2-7 seconds and the flight distance is 144 cm/2 seconds, indicating metastable is thought to be major. They attack dipicolinic acid (DPA) in the core to hydrate DPA and result in inactivation of DPA. This is quantitatively determined [1]. The phenomenon of death of DPA can be observed and determined, but the cause of DPA death is only speculation, but no final decision.