1Department of Pulmonology and Critical Care, Fortis Hospital, B-22, Sector 62, NOIDA, UP, India

Copyright: © 2016 Sircar M, et al. This is an open-access article distributed under the terms of the Creative Commons Attribution License, which permits unrestricted use, distribution, and reproduction in any medium, provided the original author and source are credited.

We report a case of endobronchial ultrasound guided trans-bronchial needle aspiration (EBUS-TBNA) in the diagnosis and bronchoscopic decompression of a tubercular mediastinal lymphadenitis causing dysphagia due to oesophagus compression.

Mediastinal masses and lymphadenopathy can present with dysphagia [1,2]. Tubercular mediastinal lymphadenopathy (TML) can produce dysphagia due to external compression, esophageal ulcerations or tracheoesophageal fistula [3]. In absence of concomitant parenchymal or endobronchial tuberculosis, bronchoalveolar lavage (BAL) and sputum smears and culture have a low yield. Conventional transbronchial needle aspiration (TBNA) has variable yield in diagnosis of TML [4]. Histological and microbiological confirmation of TML is a relative challenge for conventional bronchoscopy.

EBUS-TBNA is a relatively newer technique that involves using a bronchoscope with inbuilt ultrasound transducer mounted at the distal tip to evaluate thoracic pathologies under real time ultrasound imaging. It has been commonly used for diagnosis and staging of lung cancers. Non-neoplastic pathologies have been similarly evaluated by this new technique [4]. EBUS-TBNA can provide a very high yielding alternative to conventional TBNA in patients with tuberculosis intra-thoracic lymphadenopathy [5]. Successful isolation of causative organisms by EBUS-TBNA can also allow drug susceptible testing.

A 27-year-old woman was seen with a fortnight-long history of painful dysphagia and central chest pain with no systemic symptoms. The patient had attended another hospital where conventional upper gastrointestinal endoscopy revealed external compression and narrowing of esophageal lumen at 25 cm from incisors (Figure 1). 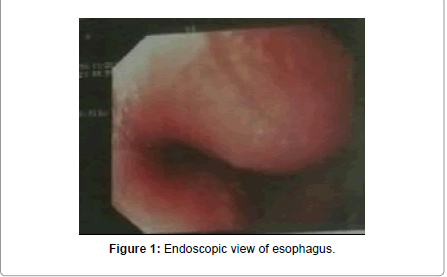 Patient was referred for endoscopic ultrasound (EUS) to our hospital (Fortis Hospital, NOIDA) but was unwilling to undergo a second endoscopic procedure. She consulted Pulmonology unit and a chest CT scan was done. It revealed multiple conglomerate necrotic lymph nodes in subcarinal region (Figure 2). No other groups of mediastinal or hilar lymph nodes were significantly enlarged. Lung parenchyma and pleura were normal. After detailed discussions the patient agreed to undergo fiberoptic bronchoscopy. It was performed via oral route with the patient in supine position under local anaesthesia and propofol sedation. No abnormalities were observed on endobronchial evaluation. We identified conglomerate, necrotic lymph nodes in the sub carinal area by using EBUS with a convex ultrasound transducer. A 22-gauge EBUS needle was used during EBUS-TBNA procedure (Figure 3). After the stylet was removed, an aspiration vacuum syringe with a 3-way tap was used to apply negative pressure to the aspiration needle while needle was moved back and forth under direct EBUS visualization. Pus like material was aspirated into a vacuum syringe. Needle was withdrawn and material from needle was collected directly in formalin (for cell block) and flushed with saline into sterile container for microbiological evaluation. This was repeated four times directed at different hypoechoic (necrotic) areas of the same site. After the last pass of needle under EBUS guidance, pus was observed to be oozing out of the puncture site in subcarinal region on right of the carina. It was immediately aspirated using the EBUS bronchoscope and collected in an in-line trap bottle around 20 ml of pus was collected (Figure 4) till oozing stopped. Careful inspection and saline lavages of entire right bronchial tree was done to minimize any potential contamination by the oozing pus. Bronchoscopy was terminated only after confirming that no further oozing of pus was occurring from the site. Patient was treated with Amoxicillin-clavulanate to prevent any secondary infections. Acid-fast bacilli were detected on Ziehl Neelsen stain of the pus (Figure 5), and the diagnosis was confirmed by the detection of Mycobacterium tuberculosis on GeneXpert test. Cell block histology too was consistent with tuberculosis. The patient had immediate improvement in dysphagia after bronchoscopy that is sustained on anti-tubercular drugs (standard four drug regimen) at the end of two months of treatment. The global threat of tuberculosis remains undiminished with the WHO estimating there were 9.6 million incident cases worldwide in 2014 [6]. Mediastinal lymph node Tuberculosis is common in developing countries like India and is not necessarily accompanied by lung parenchymal involvement.

The diagnosis and evaluation of TML is usually difficult owing to its nonspecific clinical and radiological findings and the low diagnostic yield of sputum smears. EBUS-TBNA is a recently developed procedure that is emerging as a procedure of choice for tissue diagnosis of mediastinal lesions [7]. It can give access to the mediastinal and hilar lymph node locations commonly involved in TML and also allow bronchial washings to be performed at the same sitting. Studies support that the use of EBUS-TBNA as a minimally invasive technique that can be done even on an outpatient basis and is useful in the diagnosis of granulomatous mediastinal lymphadenopathy obviating the need of invasive procedures in the evaluation of mediastinal lesions [8].

EBUS-TBNA has been shown to increase the yield compared with standard bronchoscopic techniques including conventional TBNA [9]. Diagnosis of mycobacterial lymph node infection by EBUS-TBNA was first reported in 2009, however since then published literature on evaluation of sensitivity and yield by EBUS-TBNA of tubercular granulomatous mediastinal lesions is very limited [10]. Published data report sensitivities of 84-94% sensitivity in the diagnosis of tubercular mediastinal lymph node enlargement through EBUS guided TBNA [11,12]. Single centre studies/reports from TB-endemic countries have reported variable results in literature [13].

We reported here a patient where decompression of necrotic subcarinal lymphadenopathy (causing esophageal compression) succeeded during a diagnostic EBUS procedure. To our knowledge this is first such report. Case reports of similar procedure using EBUS probe for mediastinal abscess and bronchogenic cyst have appeared in literature. Yen-Fu Chen et al. published 2 cases of patients with mediastinal abscess diagnosed by EBUS-TBNA, while Rene Franco- Elizondo et al published 2 cases of bronchogenic cysts aspirated using EBUS-TBNA [14,15]. Both however stressed the potential complication of subsequent mediastinal infection with the contaminated needle puncture and thus opined for empirical peri-procedural antibiotics. We covered our patient after the procedure with antibiotics to prevent any mediastinal or lung infection.

One can approach mediastinal pathologies via esophageal ultrasound (EUS) or endobronchial ultrasound (EBUS). It has been seen that EUS is better tolerated by patients with pronounced cough, those with poor lung function or significant comorbid lung disease [16]. Our patient had none of these conditions. While EUS is used by gastroenterologist and EBUS bronchoscope is used by pulmonologist. Performing both procedures at the same time would be expensive and time consuming [17]. However, EBUS bronchoscope has been also used to perform transesophageal needle aspiration and the technique is called as Endoscopic ultrasound (with bronchoscope)-guided fine needle aspiration (EUS-B-FNA) in some centres. Where such expertise exists mediastinal masses could potentially be approached in same sitting via both transbronchial and transesophageal routes and this may increase diagnostic yield [18]. Experience with EUS-B-FNA was limited and was not routine practice in our unit.

We reported here a case of tubercular mediastinal necrotic lymphadenopathy causing dysphagia. Not only did EBUS helped establish the diagnosis but also allowed decompression of the conglomerate necrotic lymph nodes simultaneously without either any adverse consequences or need for surgical intervention.