Case Series of Overdosed Patients Managed in an Observation Unit

Copyright: © 2015 Rizzo k, et al. This is an open-access article distributed under the terms of the Creative Commons Attribution License, which permits unrestricted use, distribution, and reproduction in any medium, provided the original author and source are credited.

Background: Observation units (OU) are an increasing aspect of hospitals in the United States. OU provide more efficient use of resources in an increasingly taxed healthcare system. The majority of poisoned patients’ medical issues resolve within 24 hours, making them ideal candidates for an OU. The purpose of this study was to examine the types and safety of overdoses placed in our OU at Einstein Medical Center Philadelphia, an urban, level one trauma center with 100,000 emergency department (ED) visits annually in Philadelphia, Pennsylvania. We hypothesized that the majority of patients admitted to the OU do not require further medical intervention or upgrading to a higher level of care.

Methods: The study is a retrospective chart review of patients with ICD-9 codes associated with overdose or poisoning admitted to our OU between 7/1/10 and 12/31/12. A total of 137 patients were identified, 112 were included. Exclusions were: admission to the hospital prior to transfer to OU (17); transfer to psychiatry (4); miscoded (2); and seen at another site (2). Research associates, reviewed medical charts using a structured data collection form to record disposition, age, gender, etnicity, ingested substances, mental status, medical interventions and any upgrades in disposition.

Conclusions: The disposition of stable patients to an OU who present to the ED after overdoses appears to be safe. Understanding the types of overdoses that are safe to be managed in an OU can assist in disposition, patient flow, use of resources, and provide appropriate level of care.

Observation units (OU) have become more prevalent in hospitals across the United States (US). Observation units provide a monitored setting for patients with a medical condition that is likely to improve within 24 hours and that do not require an inpatient setting. Cooke et al. suggested that the development of observation units has helped emergency department (ED) flow and time management as well as potentially improving the bed flow throughout the hospital by concentrating resources [1-3]. Even with the increasing number of observation units across the US, healthcare is still trying to determine how to best utilize them. Poisoned or overdosed patients tend to have acute medical issues that often improve within 24 hours of presentation [2,4-6]. Although there are multiple types of overdoses and poisonings with varying clinical presentations, these patients may be ideal candidates for an observational unit setting. Few studies have been done to evaluate these patients and their clinical course during an observation unit stay.

Hodgkinson et al. evaluated the types of patients that had been poisoned or overdosed on various medications and were monitored in the observation unit attached to the emergency department. The study demonstrated very infrequent upgrading of patients to a full admission status and a likely resolution of clinical symptoms within 24 hours [4]. Sztajnkycer et al. attempted to create an observation unit protocol for overdose patients who showed early success in their study, however they noted the need for further studies with increased patient numbers to validate their findings [7]. Calello et al. examined the use of the observation unit at a pediatric tertiary care center for overdosed or poisoned children, the majority of whom were exposed to cardiovascular and psychoactive drugs. It was found that only 5% of those patients were changed to full admission status, including two unexpected admissions for charcoal aspiration pneumonitis [2].

Beauchamp et al. launched a protocol for the treatment of low-risk APAP overdoses in the OU with 20-hour IV N-acetylcysteine. Patients in his protocol had shorter length of stays than admitted patients with the same diagnosis. Patients who were considered low risk were admitted to the OU if they had normal initial liver enzymes, and elevated APAP levels (above Rumack-Matthew nomogram treatment line). Of these, 65% were discharged from the OU without incident following repeat lab values; 35% were subsequently admitted for elevated LFTs [1].

These studies help support that an observation unit may be an ideal and safe clinical management location for selected overdose patients. However, further studies are needed to help define the specific types of overdoses that are safe to be managed in the observation unit. Understanding the types of overdoses that are safe to be managed in an observation unit can assist in better disposition determination and improved patient flow for a hospital, more efficient use of hospital resources, in addition to providing improved care for the patient. The purpose of this study was to examine the types and safety of overdoses placed in our OU. We hypothesized that the majority of patients admitted to the OU would not require further medical intervention or upgrading to a higher level of care.

We performed a retrospective chart review of patients with ICD-9 codes associated with overdose or poisoning admitted to our OU between 7/1/10 and 12/31/12. These patients were admitted through the ED at Einstein Medical Center Philadelphia, an urban, level one trauma center with 100,000 ED visits per year. The OU is an 18 bed unit capable of centralized cardiac monitoring staffed 24 hours daily by mid-level providers with supervision provided by board certified medical toxicologists. There is a toxicology service provided by emergency medicine residents, toxicology fellows and toxicology attending physicians available for consultation as needed in the ED, the OU, as well as throughout the hospital.

The primary endpoint was to determine if those patients placed in the OU were appropriate for management in the OU as opposed to needing full admission to the hospital. Patients deemed safe for observation level management included those with stable vital signs, no significant mental status or respiratory depression requiring intervention and clinical determination by the physician involved with the case. The type of substance involved with the overdose or poisoning was also evaluated.

The following information was collected from the chart: age, gender, ethnicity, past medical history, allergies, home medications, substance used in that visit's overdose or poisoning, vital signs, neurologic status (GCS), clinical signs of intoxication, if medical interventions were needed (including antidote administration, oxygen administration, dialysis or intubation), accu-check, urine drug screen (UDS), lactate, and renal function. It was noted if patients required transition to a higher level of care after their arrival in the OU.

A total of 137 patients were identified, 112 were included. Exclusions were: admission to the hospital prior to transfer to the OU (17); transfer to psychiatry (4); miscoded (2); and seen at other site within the hospital system (2). Research associates reviewed medical charts using a structured data collection form. A second reviewer confirmed the collection of the data obtained from the medical record.

Patients reported 230 agents, the most common of which were sedatives. Sixty-one of the 112 patients (54%) admitted to taking more than one agent as detailed on Figure 1. 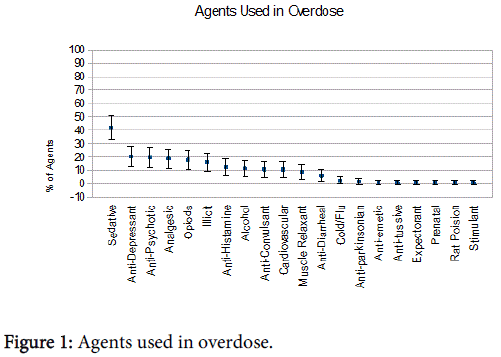 Patients presented with a wide variety of past medical histories; four of the top five most common diagnoses are psychiatric in nature, including depression, suicide attempts, substance abuse and bipolar disorder (Table 2).

The most common medical interventions in the OU were: sedatives (21%); oxygen (9%); and naloxone (4%). No intubations or cardiac arrests occurred in the ED or OU. No patients were upgraded to a higher level of care after arrival to the OU. Seven patients were transferred to psychiatry. The frequency of observation unit interventions is noted in Figure 2 and Table 3. 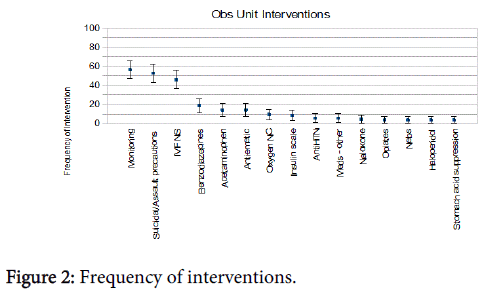 Patients who received OU care had initial GCS scores of 12-15 with low scores throughout their hospital stay ranging from 6-15. The majority of scores (57%) were 15, however 12% of GCS scores were less than 13, suggesting a significant level of altered mental status at some point during the clinical course. Based on the 112 patients, 45% did have altered mental status and 46% were noted to have an abnormal vital sign at some point during their course of treatment. The most common interventions in the OU included monitoring, including telemetry, EKG and repeat laboratory evaluations. Suicidal or assault precautions, which included 1 to 1 monitoring and restraints were also common as self-harm was a common etiology for adult poisonings and overdoses. Other common interventions included sedatives, most commonly benzodiazepines, and haloperidol less frequently (Table 4).

Acutely poisoned patients often require care for a limited period of time, often less than 24 hours, as the intoxicant is metabolized. While co-ingestants or unclear histories may lead to longer periods of care, most ingestion requires only supportive care for a finite length of time that is well suited to an OU. Furthermore, an OU provides an opportunity for consultations, including toxicology, psychiatry and social work to evaluate and provide disposition assistance separate from the pressures of a chaotic emergency department.

Three antidotes were utilized in the OU, but their use was continued from the emergency department. Four patients were started on n-acetyl cysteine (NAC), three of whom continued this in the OU; two patients received bicarbonate in the ED, one of whom continued this in the OU; 12 patients required naloxone in the ED and five patients required additional doses in the OU. The cardiac monitoring of the OU allows the provider to be vigilant for the need for additional antidote medication. While no antidotes were initiated in the OU, the availability of toxicology consultants allows for discussion and possible initiation for appropriate patients. One patient did require dialysis for an aspirin overdose in the OU, under the guidance of the toxicology service.

The direct supervision of the OU by medical toxicologists and the availability of toxicology consultation may have played a direct role in the severity and number of cases managed successfully by the OU. No patient required airway intervention or was upgraded to a higher level of care. The individual comfort level of the observation unit staff will depend on resources and experience. Conceivably, not every OU will be comfortable with a patient requiring first-time dialysis for toxic ingestion. Still others will not want to manage or initiate antidote medication.

This is a retrospective chart review and data collectors were not blinded to the purpose of the project. The OU at this academic center was supervised by medical toxicologists and the results may not be generalizable to other OUs.

The disposition of stable patients to an OU who present to the ED after undifferentiated OD appears to be safe. Additionally, observation units may be appropriate settings for patients who are not recovered enough to be discharged to home after the standard 4-6 observation period and do not require admission to the hospital. Understanding the types of overdoses that are safe to be managed in an OU can assist in appropriate disposition, patient flow, efficient use of resources, and provide the best level of care for the patient.