Copyright: © 2016 Albana R, et al. This is an open-access article distributed under the terms of the Creative Commons Attribution License, which permits unrestricted use, distribution, and reproduction in any medium, provided the original author and source are credited.

Most tuberculosis infections of the musculoskeletal system occur in the spine, hip or knee with Hip tuberculosis (TB) constituting 15%-20%. Highest rates of the tuberculosis cases in Indonesia occur in Papua. Neglected cases or delayed treatment can make management challenging. We present a 47 years old Papuan man who presented with progressive destructive TB of the hip due to lack of resources and access to adequate healthcare. He underwent a limited duration of anti-tuberculosis regimen and subsequently had debridement, girdlestone, and cemented total hip arthroplasty (THA) of the affected hip. From this case we conclude that hip arthroplasty in tuberculous arthritis of the hip with compliant administration of anti-tuberculosis drugs is a safe procedure with either cemented or cementless implants.

A WHO report in 2011 stated that there were 8.7 million cases of tuberculosis and most cases occurred in Asia (59%) and Africa (26%) [1]. In worldwide, extra-pulmonary manifestations are estimated to occur in approximately 20% of patients with TB. Specific skeletal involvement is observed in 1% to 3% of patients with TB, some source said it accounts for 1%-5%. Most tuberculosis affects are spinal, hip or knee. TB of the hip constitutes 15%-20% of the musculoskeletal system [1,2].

Prevalence of all tuberculosis (TB) cases (include pulmonary, musculoskeletal, etc.) in Indonesia on 2014 was 234 per 100.000 cases. The lowest case rate was in Yogyakarta with about 74 cases per 100.000 people and 2.722 cases in total, meanwhile the highest rate was in Papua with about 302 cases per 100.000 and 9.511 cases in total. Furthermore it is estimated that 1 in 3 cases in Indonesia has yet to be reported [3]. There is no specific data showing the prevalence of patients with tuberculosis that only manifest in musculoskeletal in Indonesia, especially in Papua.

In endemic areas, treatment of tuberculosis in the hip should be done immediately [2]. In this case we can see the progression of the neglected tuberculosis of the hip which is not immediately performed surgery treatment that should be done due to lack of resources, how treatment should be and some kind of treatment that is applied to this patient included the application of cemented THA. The authors have obtained the patient's informed written consent for print and electronic publication of the case report.

A 47 years old Papuan patient presented to our orthopaedics outpatient clinic complaining about his inability to walk normally. He had a painless limping gait and he had been diagnosed with TB on his right hip before. That diagnosis was first made in 2008, but due to financial constraints and lack of orthopaedic expertise at that time, he could not get further treatment and his condition was neglected. He only obtained common TB regimens without surgery intervention (Figure 1). Figure 1: Preoperative AP view of the hip at November 24th 2008. There is bone destruction in the right femoral head and acetabular, there is also a difference in level between the right and left femur.

In 2013, he came back to the hospital because at that time, the hospital had an orthopaedic doctor and also better facilities. But his hip condition had became worse. He felt pain in his hip both on resting a walking and he also complained of limitation on daily activities due to that pain. Thorax X-Ray showed no abnormality; Zhiel-Nielsen showed negative results on 3 examinations, but ESR was 83-98 mm/ hour and repeat pelvis X-Ray showed complete destruction of the right acetabulum and head of femur (Figures 2a and 2b). 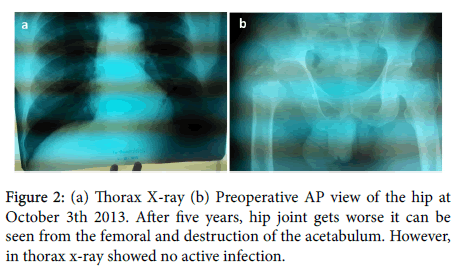 Figure 2: (a) Thorax X-ray (b) Preoperative AP view of the hip at October 3th 2013. After five years, hip joint gets worse it can be seen from the femoral and destruction of the acetabulum. However, in thorax x-ray showed no active infection.

He was started on common TB regimens (rifampicin 450 mg, INH 300 mg, pirazinamid 750 mg and ethambutol 1500 mg), underwent debridement, girdle stone of the femoral head and consuming TB regimens, he has cleared of TB infections (Figure 3). There were no similar conditions from his family. He lives alone with good living environment. Figure 3: Post girdle stone and after consuming TB regimens AP view of the hip at October 3th 2015. Hip joint does not indicate a reactivation of tuberculosis infection.

From physical examination in current admission (2 years after girdle stone excision), in the right hip region we found no inflammation signs or complaints of pain on passive or active movement, Range of Motion (ROM) of right hip joint is broader than the left hip, limping gait, leg length discrepancy (LLD) was 3-4 cm. From X-Ray examination we found destruction of acetabulum and femur shaft with a part of lesser trochanter. Blood routine, urea, creatinine, serum glutamic oxaloacetic transaminase (SGOT), serum glutamic pyruvic transaminase (SGPT), clothing time (CT), bleeding time (BT), and electrolyte are in normal range. Therapy provided includes skeletal traction for treating LLD for 9 days, total hip arthroplasty (THA), and total bed rest for 5 days in a row. There are no complaints about his condition until now after 7 months THA, patient can walk normally without limping gait, painless, and can be normal independently of daily activity (Figure 4). Figure 4: (a-d) Post-operative of the hip joint. (e) 4 months after THR patient can stand up and walk normally without pain or abnormal gait.

In TB endemic areas such as Papua, a therapeutic trial using the principle of treating instead of testing first is preferred when the typical clinical and radiographic features of TB are present [2]. In cases of extensive TB disease of the hip many surgical techniques are available such as arthrotomy with debridement, arthrodesis, girdlestone or total hip arthroplasty (THA). Girdlestone is not difficult to perform and in most case give satisfactory clinical results, although its major disadvantage is loss of function due to reduced hip offset. Improvement of ROM as well as the reduction of pain post operatively can be obtained by regular preoperative physiotherapy [3,4]. Employment of effective anti-tubercular drugs can reduces the chances of recrudescence significantly [2].

Another available therapy is THA which is done after resolution of the tuberculosis infection. The timing of THA in a hip with active tuberculosis infection is controversial due to the potential risk of reactivation of tuberculosis. In the past, the consensus was to consider joint replacement in patients whose disease has remained inactive for approximately 10 years. However with the acceptability of the THA gradually increasing globally, some studies emphasized that the length of time of the inactive infection should not be a decisive factor and that there may always be the risk of tuberculosis reactivation [2,5].

In fact Wang in his meta-analysis of current literature concludes that THA in hip TB patients with the right combination of antituberculosis medication does not attribute the failure rate to reactivation of tuberculosis. This principle was applied in our case, the patient was given anti-tuberculosis regiment, debridement, girdlestone resection arthroplasty 2 years before THA. The combination of antituberculosis drugs for at least 2 weeks prior to the operation and at least 6 months after operation is crusial, with some literatures suggest up 12 to 48 months. If the acetabulum is involved as in osteoarticular tuberculosis, there is no role of hemi replacement. Orthopaedic surgeons working in South and Southeast Asia are most likely to encounter cases of osteoarticular tuberculosis [2,5].

On the other hand, cemented THA has been done in our patient cemented THA and there are no reactive infection or other complaint after 7 months THA. It was also done in other study that performed cemented THA in 23 patients with active tuberculous arthritis of the hip. All patients had received antitubercular therapy before and after surgery and no activation of the infection or implant-loosening was recorded after 4.7 years [2].