Copyright: © 2016 Sinha M, et al. This is an open-access article distributed under the terms of the Creative Commons Attribution License, which permits unrestricted use, distribution, and reproduction in any medium, provided the original author and source are credited.

In x-ray multilayer, the thickness of top layer plays an important role in determining its reflectivity performance. In experimentally grown multilayer, the top layer parameters are found significantly different from those of underneath layers due to growth related issues and contamination effect. The calculations suggest that for top layer characterization the sensitivity of reflectivity technique depends on layer material. Considering the top layer of silicon the first Bragg peak reflectivity of Mo/Si multilayer changes by 2-3% while change in top layer thickness by a factor of two and more, In case of SiO2 as a top layer material the 1st Bragg peak reflectivity changes by 13%. The analysis of total electron yield (TEY) data reveals that the technique can be used to probe 2-4 Å variation in top layer thickness. The both technique-reflectivity and TEY, together gives an complete information of multilayer structural parameters.

Multilayers have found wide applications in soft X-ray/extreme ultra violet (EUV) lithography, soft X-ray microscopy, synchrotron beamlines and many other technological areas. Structural periodicity ‘d’ of a multilayer can be tailored according to choice of wavelength and therefore its applicability has spread in different regime of wavelengths and angles. Structural parameters play a key role in determining multilayer performances. Well defined periodic structure give rise to multiple Bragg peaks along with Keissig fringes. In the soft x-ray region near Si L-edge the Mo/Si multilayer is considered as one of the efficient mirrors [1]. The reported reflectivity for Mo/Si multilayer is 74% near 130 Å wavelength region for near normal incidence angle.

Due to the reaction with ambient and contamination effect, it is found that the values of top most layer thickness, roughness, and density parameters deviate significantly from those of underneath layer values in the experimentally grown multilayers. If the top layer consists of a low Z material then the calculations suggest that the change in reflectivity of Mo/Si multilayer is about 2-5% with 100 Å and more change in top most layer thickness. In some cases a capping layer on top of multilayer stack is deposited e.g. SiO2, C, SiC, Pd, Rh, and in such cases the change in Bragg peak reflectivity may go upto 20% with top most layer thickness variation [2]. The top layer plays a crucial role in defining the multilayer performance. Its proper characterization is required.

X-ray reflectivity (XRR) technique is used to analyze in depth structural details of a multilayer stack. The technique gives information about thickness, interface roughness and density of a layer structure. The total thickness of a multilayer stack give rises the interference fringes called Kessig fringes. The periodic arrangement of a layer stack gives the Bragg reflection peaks. Any thickness variation in top layer causes a change in amplitude of Keissig fringes which many a times lies under the error bar of source stability. Therefore XRR technique is less sensitive to top layer parameters especially in case of multilayer samples.

Ejima et al. have reported that the TEY technique is more powerful in analyzing a surface layer [3]. In a TEY method, electrons emitting from the surface are measured. Pepper proposed a TEY formalism for thin films and multilayer. Ejima extended this formalism for multilayer analysis [4]. The top layer thickness dependence of TEY technique has been reported using a Mo/Si multilayer [4].

Mo/Si multilayer of 20 layer pair with a periodicity of 66.9 Å and Γ=0.64 is deposited by ion beam sputtering technique on silicon substrate. Angle dependent reflectivity and TEY measurements were carried out for 124.8 Å wavelength at Indus-1 synchrotron source using reflectivity beamline. TEY signal was detected by measuring surface current using Keithley 6514 electrometer. The experimental data of TEY were fitted using MATLAB code based on Ejima model7. 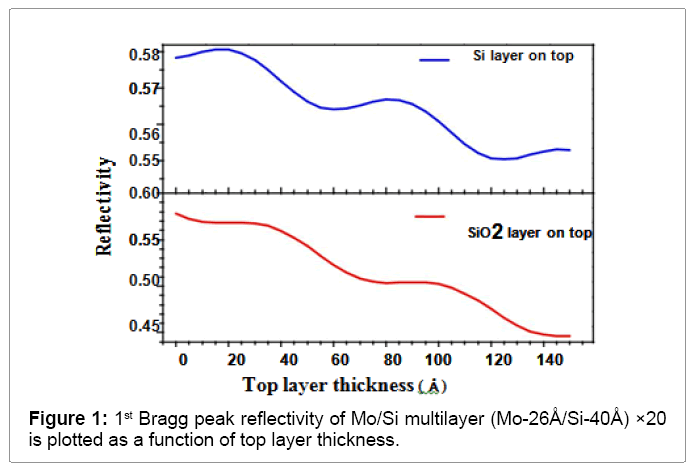 In order to experimentally investigate the effect of top layer thickness on multilayer performance and the sensitivity of SXR technique to the top layer a Mo/Si multilayer (Mo-26 Å/Si-40 Å) 20 was used and SXR and TEY measurements were performed. The measured and fitted soft x-ray reflectivity curves using 124.8 Å wavelength of this multilayer are shown in the Figure 2. The SXR analyses suggest that the thickness of Si layer is 40 Å and Mo layer is 26 Å. Si-on-Mo interface has roughness in 7-9 ? range whereas for Mo-on-Si interface it is in 10-12 ? range. The two interfaces in Mo/Si multilayer are known to exhibit asymmetric interface behaviour [5]. During the fit of the experimental data the thickness of the top most silicon layer is taken as 40 Å. It is obvious from the Figure 2 that the calculated data are in good agreement with the experiment in the Bragg peak region but it shows a significant deviation in near critical angle region. In order to get a best fit the thickness of the top layer was varied and found a good agreement with the experimental data for the top layer as Si-26 Å + SiO2-14 Å. In Figure 2, different curves are generated by varying the SiO2 layer thickness. It comes out that the SXR pattern marginally changes in the near critical angle region upon change in the SiO2 layer thickness in 10-20 Å range. It comes out that the SXR sensitivity to top layer thickness is relatively less, of course it is dependent upon layer material.

To further investigate the multilayer structure a TEY vs. angle spectra of Mo/Si multilayer was measured simultaneously along with the reflectivity data. To fit the TEY spectra a two layer model is used where initial 19 layer pair of Mo/Si multilayer (Mo 26 Å/Si 40 Å)×19 was taken as similar to that one used for obtaining the fit of SXR data. A large mismatch between measured and calculated TEY spectra is found which suggest that the fit parameters obtained from SXR analysis does not hold true for TEY case (Figure 3). The reason for this difference might be due to the attenuation length. For soft X-rays, TEY intensity is due to integration of high energy photoelectron and low energy secondary electrons produced in cascade, that have a broad kinetic energy distribution peak below ~5 eV [6]. Due to the shape of universal escape depth descape curve (~L) in which descape is minimum near 1 keV and increases exponentially going towards lower energy, so the TEY signal is dominated by low energy electrons in cascade.

As the TEY spectra do not get fitted using the fit parameters obtained from SXR analysis, certain changes in the optical parameters of constituent layers was tried. By changing the optical constants of Si and Mo by factor of 2 the agreement between experimental and calculated data improved. In this refinement process the thickness of topmost layer comprising 14 Å SiO2 + 26 Å Si was also varied. A best was obtained for 23 Å SiO2 + 17 Å Si. The fitted graph is shown in Figure 3. Other fit parameters used in TEY analysis are attenuation length 4.5 Å for Mo and 8 Å for Si layer. Transmission rate for all interface are 0.3 except for the top layer. The thickness of Si layer is found as 40 Å and 25.3 Å for molybdenum. Roughness values are 12.1 Å and 7.3 Å for silicon and molybdenum respectively. Topmost SiO2 layer thickness and the roughness value are found to be 23 Å and 5 Å respectively (Table 1).

To understand the TEY sensitivity to top layer thickness, different curves are generated by varying the SiO2 layer (top most layer) thickness. It is found that the shape of standing field pattern generated near 80 deg position changes along with a change in its angular position (Figure 3). This suggests that the TEY is more sensitive to top layer thickness variation than reflectivity technique.

Due to the small attenuation length of electrons, with very low energy below 5 eV for soft x-ray region, only electrons of near-surface of Mo/Si multilayer would be able to reach sample surface. This would result in the TEY intensity where the electrons of near-surface region contributes more. The optical constants and structural properties obtained for near-surface region by TEY can be considered to be more accurate than that of SXR technique, depicting the surface sensitivity of TEY technique.