Copyright: © 2015 Singh S. This is an open-access article distributed under the terms of the Creative Commons Attribution License, which permits unrestricted use, distribution, and reproduction in any medium, provided the original author and source are credited.

More than fifty years have passed since the field of Quantitative Structure-Activity Relationships (QSAR) modeling was founded by Corwin Hansch [1]. Initially conceptualized as the logical extension of physical organic chemistry, QSAR modeling has grown, diversified, and evolved from application to small series of congeneric compounds using relatively simple regression methods to the analysis of very large datasets comprising thousands of diverse molecular structures using a wide variety of statistical and machine learning techniques. More than fifty years of continuous improvements, interdisciplinary breakthroughs, and community driven developments were needed to make QSAR one of the commonly employed approaches to modeling the physical and biological properties of chemicals in use today.

QSAR modeling (Figure 1) is widely practiced in academy, industry, and government institutions around the world. Recent observations suggest that following years of strong dominance by the structure-based methods, the value of statistically-based QSAR approaches in helping to guide lead optimization is starting to be appreciatively reconsidered by leaders of several larger CADD groups [2]. 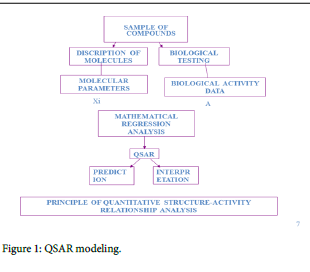 QSAR models find broad application for assessing potential impacts of chemicals, materials, and nanomaterials on human health and ecological systems. An area of active QSA expansion is in the use of predictive models for regulatory purposes by government agencies, where a still growing number of specialized regulatory tools and databases are being developed and validated. Obviously, QSAR modeling is a computational field but its major beneficiaries and the ultimate judges are medicinal chemists. Whenever computational scientists begin to address problems within a primarily experimental scientific domain there is always a challenge of finding the proper interface and balance between computational and the respective experimental domain expertise. Of course, it is computational scientists who are expected to create computational tools that would be valuable for experimental researchers. One may then pose a question as to once the tools are created who should use them: still the "developers" who have learned enough of the domain expertise to make the application of the tools meaningful or the "users" who have learned enough of computational science to use the tools properly. The amount of chemogenomics data generated by experimentalists is exploding [3].

QSAR models are now regarded as a scientifically credible tool for predicting and classifying the biological activities of untested chemicals. QSAR has become inexorably embedded as an essential tool in the pharmaceutical industry, from lead discovery and optimization to lead development [4,5]. A growing trend is to use QSAR early in the drug discovery process as a screening and enrichment tool to estimate from further development. Those chemicals lacking drug like properties [4] or those chemicals predicted to elicit a toxic response. The fundamental assumption of QSAR is that variations in the biological activity of a series of chemicals that target a common mechanism of action are correlated with variation of their structural, physical and chemical properties [5].

Since presumably these structurally related properties of a chemical can be determined by experimental or computational mean much more efficiently that its biological activity using in-vivo or in-vitro approaches, a statistically validated QSAR model is capable of predicting the biological activity of a new chemical within the same series in lieu of the time-consuming and lab our-intensive processes of chemical synthesis and biological evaluation. Applied judiciously, QSAR can have substantial amount of time, money, and human resources.

The molecular structure and parameters derived from molecular spectral data of organic compounds acting as drugs can be combined to form powerful models of biological activity. Such data-activity relation is now-a-days called Quantitative Structure-Data-Activity Relationships (QSDARs) instead of QSAR the reason being QSDARs involved the use of spectroscopic data in establishing structure-activity relationships. As is well known, chemical shifts in NMR or force constant in IR (infra red) spectroscopy offer a powerful probe for the study of the immediate atomic environment in the molecule. The spectral parameters obtained from molecular spectra are then called molecular descriptors, which then are used in QSDARs. Modern rational drug design widely relies on building extensive QSAR/QSPR/QSTR/QSDAR models. The limitations of fundamental physical and chemical laws in direct quantification of biological activity made computational chemists to search for simplified but efficient ways of dealing with the phenomenon, such as by the means of molecular descriptors vis-à-vis graph theoretical invariants. Modern QSAR uses a broad range of atomic and molecular descriptors. The empirical descriptors, such as substitution constants originated the field of early QSAR studies.