+447482877761
Chromosomes of Two Species of Acanthocephalans Collected from the Fishes of Kashmir Valley, India | OMICS International

Chromosomes of Two Species of Acanthocephalans Collected from the Fishes of Kashmir Valley, India

3Centre of research for Development, University of Kashmir, Srinagar-1900 06, India

Copyright: © 2015 Ahmad F, et al. This is an open-access article distributed under the terms of the Creative Commons Attribution License, which permits unrestricted use, distribution, and reproduction in any medium, provided the original author and source are credited.

In the present study, karyotypes and chromosomes of two species of the families Pomphorhynchidae (Pomphorhynchus kashmirensis, Kaw 1941) and Neoechinorhynchidae (Neoechinorhynchus manasbalensis, kaw 1951) from intestinal tissues of Schizothorax and Cyprinus spps, were studied. Karyotypes of both the species is 2n=8 in which P. kashmirensis possess 4 submetacentric and 4 subtelocentric chromosome pairs whereas in case of N. manasbalensis first two pairs are metacentric, next two pairs are submetacentric and last 4 pairs are telocentric. The karyotype of N. manasbalensis seems to be more ancient, because its chromosomes are nearly telocentric. Such uniformity could be regarded as a plesiomorphic character of an ancestral karyotype.

Acanthocephalans, which use vertebrates as definitive hosts and arthropods as intermediate hosts, are a small group of obligate endoparasites with about 1200 species in the world [1]. They were historically classified in the phylum Nematoda [2], but were more recently recognized as a group within the phylum Rotifera in either traditional morphological [3,4] or molecular phylogenetic analyses [5]. Several authors have attempted to examine the phylogenetic relationship of Acanthocephalan classes [5-9] but their phylogenetic relationships remain to be resolved [10].

In Phylum Acanthocephala, we find very few records of the examination of the chromosomal components of the various species. Apparently only 5 species belonging to 3 genera have been studied: Macracanthorhynchus hirudinaceous (Noe, 1914); of the Archiacanthocephala, and Echinorhynchus (acus, haeruca, and polymorphus), [11] and Pomphorhynchus proteus [12] of the Palaeacanthocephala (Table 3). As far as the actual chromosome numbers are concerned, one can only say that the low numbers reported are in accordance with the high specialization of the Phylum, but do not give recognizable clues as to possible relationships, either within groups above the species level, or as to possible derivation from other phyla. Here for the first time we described the chromosome number and morphology of two Acanthocephalan species belonging to two families.

Table 3: Summary of Chromosome number of Acanthocephala from 1891 till Date.

The species studied are Pomphorhynchus and Neochinorhynchus, parasites commonly found in several freshwater fish in Kashmir valley (Table 4). In spite of this, Pomphorhynchus and Neochinorhynchus appear to grow and develop to maturity in only a small number of host species [13]. Pomphorhynchus and Neochinorhynchus specimens were isolated from intestinal tissues of Schizothorax and Cyprinus spps, sampled in the water bodies of Kashmir valley and brought back to the Zoology laboratory, University of Kashmir. The whole digestive tract was removed, longitudinally opened and examined for the presence of helminths. The parasites were placed in a colchicine saline solution for 1 h. Following hypotonic treatment (normal saline: distilled water, 1:1, for 30 minutes), they were fixed for 1h in 3:1 methanol: glacial acetic acid. The fixed parasites were then transferred to clean slides and the cells dispersed in a drop of 60% acetic acid. Finally, the slides were placed on a warm plate and the cell suspension was allowed to dry while being moved about on the surface. Slides were stained with Giemsa.

Table 4: Summary of chromosomes of Acanthocephalan parasites from fishes of Kashmir valley.

For karyotyping, chromosomes were cut out of the photomicrographs and paired on the basis of size and centromere position. The homologues were cut and arranged in metacentric, submetacentrics, meta-submetacentric, telocentric, subtelocentrics and acrocentric pairs. Relative lengths of chromosomes were calculated by the division of the individual chromosome length by the total haploid length and centromeric indices (ci) were determined by division of the length, i.e;

Measurements are based on all chromosomes from 10 best metaphase spreads of parasites. The terminology relating to centromere position follows that of Levan et al, [14]. A chromosome is metacentric (m) if the ci falls in the range of 37.5–50.0, submetacentric (sm) if 25.0–37.5, subtelocentric (st) if 12.5–25.0; acrocentric (a) if<12.5 and telocentric if 0. When the centromere position was on the borderline between two categories, both are listed.

Pomphorhynchus kashmirensis belongs to family Pomphorhynchidae were collected from the Cyprinus carpio communis and Schizothorax labiatus of water bodies of Kashmir valley. The somatic compliment of this species revealed a diploid number of 8 chromosomes (2n=8) comprising 4 submetacentric pairs and 4 subtelocentric pairs (Figure 2). The chromosomes range in length between 4.66 µm to 8.93 µm long. The total length of the haploid complement equals 27.44 µm. Arm ratios of the complement ranges between 2.16–5.05 and the centromeric index ranges between 16.52–31.69 (Table 1). Fundamental arm number is 12. Stastically there is less significant difference between first two and last two pairs of chromosomes in relation to their relative length (P-Value=0.024; P<0.05; Students T-test). There is significant difference between their short and long arms (P-Value=0.000; P<0.01; Students T-test). On the basis of absolute length and centromeric position the chromosomes have been arranged in order of decreasing length in an ideogram (Figures 3 and 4). 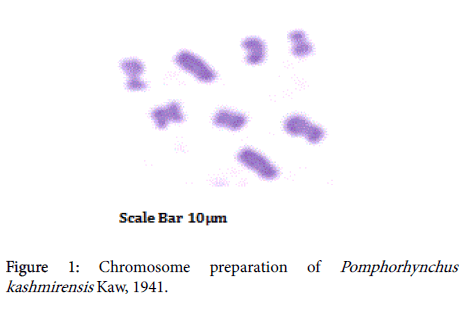 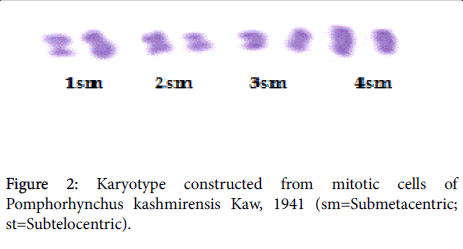 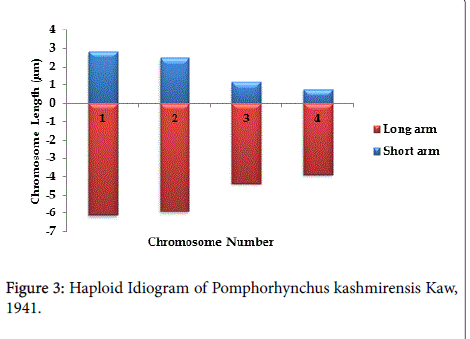 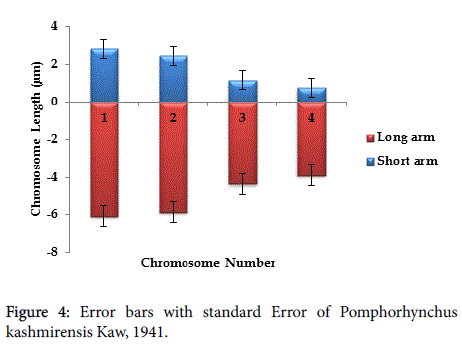 Neoechinorhynchus manasbalensis belongs to family Neoechinorhynchidae and were collected from the Cyprinus carpio communis, Cyprinus carpio specularis and Schizothorax curvifrons of water bodies of the Kashmir valley. Analysis of mitotic metaphase spreads from ten specimens showed that the modal diploid complement of Neochinorhynchus manasbalensis again contains 8 chromosomes (2n=8) (Figure 5). The karyotype (Figure 6) included two metacentric; two submetacentric and four telocentric chromosome pairs. The karyotype formula of Neochinorhynchus manasbalensis can be summarised as 2n=8=2m+2sm+4t. A summary of the results obtained after measuring the Giemsa-stained chromosomes of ten complete metaphase plates is given in (Table 2). The chromosomes are middle sized; the largest measured 7.55 µm and the smallest were 5.12 µm long. The total chromosome length of the haploid complement was 26.52 µm. Fundamental arm number is 12. There is a statistically significant difference in their sizes and centromeric indexes (P-Value = 0.003; P<0.05; Students T-test). In order to better visualize the existing differences in chromosome morphology, ideograms were constructed using the centromere indexes and relative length values (Figures 7 and 8). 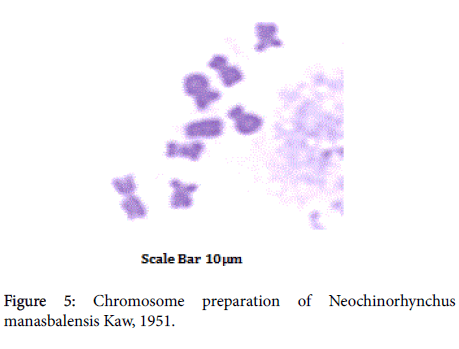 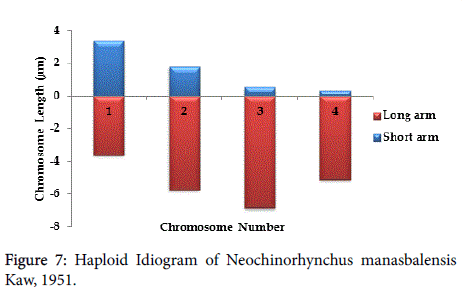 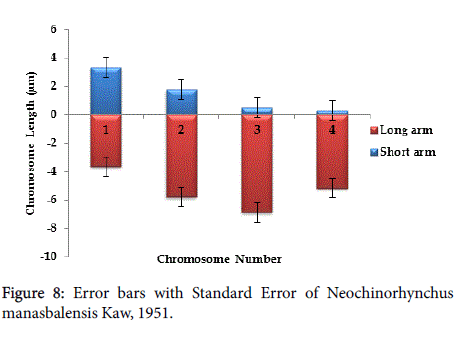 During the present investigation, it was observed that Pomphorhynchus kashmirensis showed diploid chromosome number 8 (2n=8) comprising four submetacentric and four subtelocentric pairs which are in accordance with the results of Walton (1959) who showed 8 chromosome of Pomphorhynchus laevis. Our results are also in agreement with Mutafova and Nedeva (1988) while studied on Pomphorhynchus laevis and showed that chromosome number was more precisely established by as 2n=7 in males and 2n=8 in females and they also reported one pair of submetacentric autosomes. In view of the scarce data available and the lack of precise information about chromosome morphology, it may seem imprudent to advance any general hypothesis about the cytotaxonomy of this group. However, the large size of chromosomes and the low complement number make this animal group very interesting for cytological investigation. We therefore believe that by extending karyological research to other acanthocephalan species it may be possible to shed light on the taxonomical relationships and karyotype evolution of these parasites.

In Acanthocephala, we find very few records of the examination of the chromosomal components of the various species; only 15 species belonging to 8 genera of 6 families have been studied till date, in which chromosome number ranges from 5 to 32 (Table 3). Robinson (1964) showed that in Macracanthorynchus hirudinaceus the diploid number is 6, and strong evidence seems to indicate that the male is heterogametic and that an X-Y pair of heterochromosomes is present. Pomphorhynchus laevis [24] seems to have 8 somatic chromosomes while the 3 Echinorhynchus species show 16, [11,12,17-20]. This definite ratio relationship between members of the Echinorhynchidae may or may not be of phylogenetic importance, but definitely does support the separation of Pomphorhynchus from Echinorhynchus, a separation which some authorities have questioned on purely morphological grounds. It is interesting to note that in the only genus in which more than one species has been studied there is a common chromosome number. As far as the actual chromosome numbers are concerned, one can only say that the low numbers reported are in according with the high specialization of the Phylum, but do not give recognizable clues as to possible relationships, either within groups above the species level, or as to possible derivation from other phyla.

Walton showed how the low chromosome numbers of the Acanthocephala are consistent with the high specialization of the phylum [18]. However, the limited knowledge of their karyology does not give recognizable clues to taxonomic relationships. Nevertheless, since the majority of chromosomal complements is 2n=6 or 8, while three species show a chromosome number more or less doubled, 2n=16, it can be suggested that polyploidy may have occurred. It should be remembered that the data reported by Walton [18] refer to the Hamann's earliest records [11]. Therefore, confirmation is necessary since we observed in some individuals premature centromere division or endoreduplication with frequencies over 10%. The karyology of this group deserves further study, which may be interesting for the parasitologists, since karyological data are a good approach to taxonomical and phylogenetical problems.

The authors extend their thanks to the authorities of the Department of Zoology, University of Kashmir for the facilities provided. First author is also highly thankful to Prof. Fayaz Ahmad for compiling the paper.