Clear Cell Carcinoma of the Ovary: A Case Report

Clear cell carcinomas (CCCs) occur most often in young women (median age: 20 years) even before the first pregnancy. It is essential to be conservative and to respect the genital system as much as possible to preserve ovarian hormonal function and fertility. Mutations in KRAS, BRAF, and TP53 are present in some clear cell carcinomas, but their frequency is generally low. Mutations predicted to deregulate PI3K/PTEN signaling. Because of resistance to the usual platinum and taxane chemotherapies, the advanced stages have a much worse prognosis than that of serous tumors. Thus, some studies have suggested that CCCs may be more sensitive to a combination of irinotecan than paclitaxel-based chemotherapy.

Clear cell carcinoma (CCC) is a rare malignant tumor of the ovary representing less than 10% of adult ovarian tumors. They are most often diagnosed at a localized stage and their spontaneous prognosis seems then close to that of the serous tumors [1]. In fact, CCCs have a genomic profile distinct from that of serous or endometrioid adenocarcinomas of the ovary and which would be closer to that of tumors of the same histology, but coming from different organs (renal tumors for clear cell cancers) [2].

We report the case of a patient of 25 years, primipara; with an antecedent of uncle’s colon cancer [3], who presented an abdominalpelvic mass of 19 cm suspicious of malignancy with vascularized vegetations and multi divided by thin septa. In laparotomic exploration, there was a giant right ovarian mass (Figure 1) with many metastatic nodules in peritoneum. The decision was to perform a right adnexectomy and multiples biopsies of the left ovary, peritoneal nodules, and peritoneal cytology. The clear cell carcinoma was confirmed by histology, and the peritoneal metastases too. The patient was addressed to chemotherapy in order to be conservative [4]. 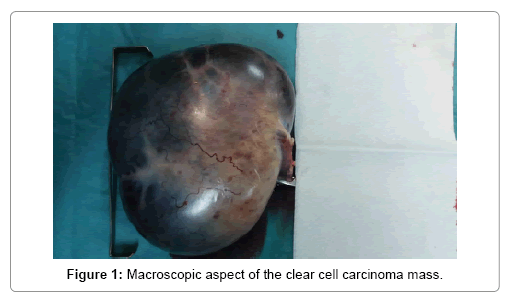 The diagnosis can be guided by blood markers; in the hypothesis of a germinal tumor: gonadotropic chorionic hormone (hCG), alphafetoprotein; in the hypothesis of a tumor of the sexual cords: antimullery hormone (AMH), inhibin; in the hypothesis of an epithelial tumor: CA 125, CA 19-9; and in the case of a small cell tumor: calcemia and neuron specific enolase (NSE). The initial surgical procedure is essential since it allows the diagnosis, the assessment of extension of the disease and the first therapeutic act. The gesture therefore consists at least in unilateral adnexectomy (a cystectomy or oophorectomy), a complete exploration of the pelvis and the entire abdominal cavity, a peritoneal lavage and / or a removal of any ascites present at the opening of the abdomen, systematic peritoneal biopsies (including at the omentum level) [5] and removal of any suspicious elements. It is perfectly lawful for young women, if in doubt, to perform two-stage surgery (if a more extensive procedure is necessary for certain histological types) after having obtained the definitive results of the histological examination, and this even in case of metastatic disease.

Data from the literature regarding postoperative indications for chemotherapy remain open to discussion and have little guidance for patients in complete response. The advanced stages, on the other hand, have a much worse prognosis than that of serous tumors because of resistance to the usual platinum and taxane chemotherapies. Thus, some studies have suggested that CCCs may be more sensitive to a combination of irinotecan than paclitaxel-based chemotherapy.

Copyright: © 2019 Berrada S, et al. This is an open-access article distributed under the terms of the Creative Commons Attribution License, which permits unrestricted use, distribution, and reproduction in any medium, provided the original author and source are credited.