Bleaching efficiency is evaluated by the degree of whiteness, absorbency, copper number, tendering factor, strength or strength loss, dye uptake, alkali solubility, degree of polymerization and chemical transformation. Recent lab-scale studies have proven ozone to bleach with efficiency comparable to the conventional bleaching agents and hydrogen peroxide at faster rates without requiring heating or any other supportive treatment with less energy and water. Ozone alone, however, showed poor efficiency in pilot-scale determinations, suggesting the use of certain additives to support it in performing its bleaching action. This research was conducted to compare the influence of methanol, isopropanol, oxalic acid and sodium borohydride on improvement in the bleaching performance of ozone in terms of whiteness, absorbency and burst strength. The additives brought an overall improvement in whiteness, absorbency and burst strength of cotton but had significant difference in their performance, as assessed from the pvalues yielded by one-way ANOVA applied on SPSS 20. Methanol outclassed other three in its performance bringing the highest increase in whiteness and burst strength and the highest reduction in fabric absorbency.

Bleaching efficiency is evaluated by the degree of whiteness, absorbency, Copper Number (CN), Tendering Factor (TF), strength or strength loss, dye uptake, alkali solubility, Degree of Polymerization (DP) and chemical transformation [1,2]. Ozone has been proved to give high bleaching efficiency in all these contexts; not only for cotton [1-3] but for other types of natural fabric; such as Angora rabbit fiber [4], jute [5] wool, silk, nylon and even for paper pulp [6]. Ozone, rather, has long been in use for pulp bleaching; earlier, in Totally Chlorine Free (TCF) paper pulp production due to the benefits of improved selectivity, brightness, production economy and stability, and after reduction in market value of the TCF pulp, in Elemental Chlorine Free (ECF) sequences [6].

A major loss, however, that ozonation results, is high loss of degree of polymerization (48%) and breaking strength (19%) which were both low with hydrogen peroxide [5]. Lemeune et al. [7] measured 40% loss of degree of polymerization after ozonation on the basis of viscosity determined by cupri-ethylene di-amine at an ozone dose of 20 mol equiv per 100 gram of fiber (about 3% by weight) while no loss of DP was observed with as high as 50% by weight of chlorine dioxide. Breakdown of the glycosidic bonds at a faster rate than the oxidation reaction was noticed as the reason. Furthermore, ozone alone did not yield high bleaching efficiency at pilot-scale [1].

Yilmazer and Kanik [8] optimized Sodium Borohydride (SBH) bleaching combined with Sodium Bisulfide (SBS) and compared its results with those of hydrogen peroxide in the presence of a stabilizer and a wetting agent. 2 g/L SBH with 15 g/L SBS yielded a whiteness of 30.82%, yellowing of 17.49% and alkali solubility of only 15.53%. Whiteness and yellowing indices are comparable to hydrogen peroxide bleaching but alkali solubility/damage is much less which indicates SBH can control cellulose damage.

Carboxylic acids at pH 2, are the additives that work best in protecting cellulose degradation with high rate of delignification under numerous studies conducted on various additives grouped into six categories (organic acids, alcohols, nitrogen containing organic compounds and the inorganic additives and others), resultantly increasing kappa number (an indirect measure of lignin content), whiteness and viscosity of pulp. Formic acid and oxalic acid also aid in reducing ozone consumption in order to hit the target of a certain kappa number. Among alcohols, preparing bleaching mixture with 35% by weight of ethylene glycol at pH 3 has given the best output in terms of degree of polymerization. Ethanol and methanol are other alcoholic additives common to use [9]. Performing ozone bleaching in alcoholic media helps improve viscosity even at lower temperature compared to ozone bleaching in water as medium.

Greige cotton fabric was available for research at the Punjab University laboratory where research has been carried out, along with all the equipment supporting the research. L10G lab-scale ozone generator, Faraday, USA (a 60 cm long lab-scale bubble column reactor with an internal diameter of 3.5 cm) with 10 g/h ozone generating capacity, Mark 5 Purezone, USA oxygen concentrator/diffuser (feeding oxygen at 2 L/min at the bottom of the reactor), UV P 200 Ozonova, Germany ozone analyzer and G212 Gfg Germany ozone monitor (to measure ozone gas bubbles that had not participated in the reaction and had emerged out in the exhaust- being poisonous) comprised the experimental setup placed in a fume hood to control the ozone in the exhaust and its hazards. Other instruments used in this study include Datacolocr 600+ spectrophotometer for %whiteness evaluation, Titan- Universal Strength Tester by James. H. Heal & Co. Ltd. for burst strength measurement, stop watch for absorbency quantification and glassware for preparing reagents and additive solutions. Reagent-grade additives (methanol, isopropanol, oxalic acid and sodium borohydride) and 1 N acetic acid for pH adjustment were collected from the University of Veterinary and Animal Sciences labs.

American Association of Textile Chemists and Colorists standards [10] were used for assessing %whiteness W and measuring absorbency at the lab, for approximately 5 g of fabric bleached with ozone with one of the four additives with ozone dose of 10 g/h for 45 min at room temperature (pH adjusted only in case of sodium borohydride). For evaluation of burst strength, however, services of Societe Generale de Surveillance (SGS) Pakistan were hired and American Society for Testing Materials standards (Standard ASTM D3787) was followed.

For the assessment of whiteness, the spectrophotometer was first calibrated with a white strip of known tri-stimulus values, and then, the test fabric was placed on the instrument platform to obtain the tristimulus values for it. %whiteness was calculated from the tri-stimulus values using the following equation:

Time taken by a drop of water to get vanished from the surface of the bleached fabric was recorded as absorbency, when dropped from 1 cm above the fabric.

SPSS 20 was used to apply one-way ANOVA to the readings of whiteness (%), absorbency(s) and burst strength(lbf) repeated three times for all the four additives to obtain descriptive (mean, standard deviation, standard error, maxima and minima), confidence interval at 95% confidence level and significance level (p-value) for the difference in the parameter with a change of the additive.

Methanol and isopropanol are alcoholic, oxalic acid is an organic acid and sodium borohydride is an inorganic additive. Results of the study comprise tabular presentation of the descriptive and p-values obtained from one-way ANOVA applied on SPSS 20 (Tables 1 and 2) and multiple bar charts comparing the performance of the four additives against ozone bleaching performance without any additive (blank) in terms of the selected three bleaching efficiency parameters, presented in Figures 1-3. 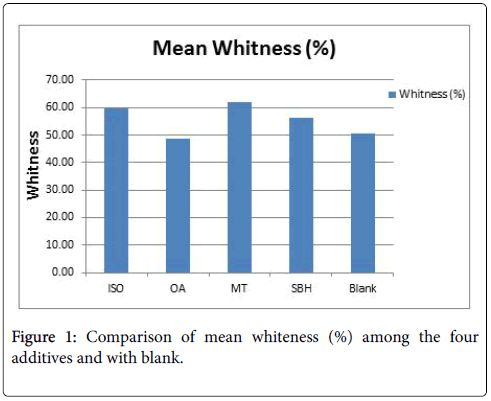 Figure 1: Comparison of mean whiteness (%) among the four additives and with blank. 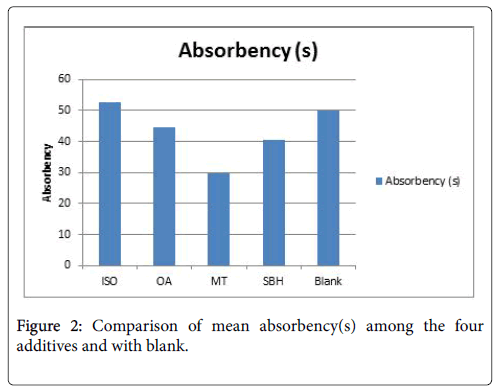 Figure 2: Comparison of mean absorbency(s) among the four additives and with blank. 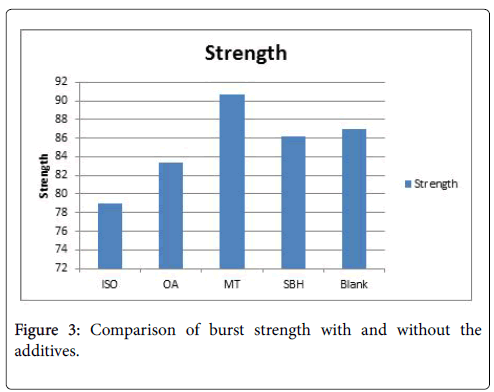 Figure 3: Comparison of burst strength with and without the additives.

Table 1: Descriptive for whiteness, absorbency and burst strength with ozone bleaching of cotton fabric and the selected additives.

Table 2: One-way ANOVA and p-value for difference in absorbency, whiteness and burst strength of cotton fabric with the four additives.

This table presents the descriptive (mean, standard deviation, standard error, maxima and minima) for whiteness, absorbency and burst strength as observed for cotton fabric bleached with ozone in the presence of methanol, isopropanol, oxalic acid and sodium borohydride, as well as the confidence intervals for their values at 95% confidence level. For instance, mean whiteness yielded with isopropanol, oxalic acid, methanol and sodium borohydride were 59.75, 48.505, 61.89 and 56.125% respectively with standard deviations and errors of 3.42 and 1.39 (isopropanol), 6.17 and 2.52 (oxalic acid), 2.35 and 0.96 (methanol), and 2.43 and 0.99 (sodium borohydride). Minimum and maximum whiteness achieved with the four additives in their trials are 55.82 and 64.42% (isopropanol), 40.92 and 57.33% (oxalic acid), 58.88 and 65.02% (methanol), and 53.00 and 59.54% (sodium borohydride). Likewise, this table suggests that it can be in the table present methanol to give better results compared with the other three additives. Low standard deviation and standard error values for whiteness and burst strength also indicate the precision of their calculations in the trials.

One-way ANOVA was run on SPSS 20 for 95% confidence level. pvalue describing the significance level yielded by the ANOVA test is below 0.05 (default significance level at 95% confidence level) for whiteness and burst strength signifying the fact that the change in the choice of additive creates statistically significant difference in both of these parameters, but for that of absorbency, the p-value generated by ANOVA test is below 0.05, meaning absorbency is not a function of the choice of additive, or in other words, absorbency is not significantly affected by the additives in ozone bleaching. Results of inferential statistics applied to experimental outcomes of optimizing ozone bleaching with various additives, as produced by Arooj et al. [1] also showed statistical significance in the difference of whiteness caused by these additives, due to the difference in their nature and their performance in the optimized reaction conditions.

It is evident from these three bar charts that all the additives bring an overall improvement in the fabric whiteness and absorbency compared to the response produced by ozone bleach without the application of these additives, except for whiteness with oxalic acid and absorbency with isopropanol, but support/enhance fabric damage or the strength loss caused by ozone, as viewed in terms of fabric strength lower with the additives than the control, except for methanol which has resulted a burst strength higher than ozone used in isolation of any additive. This is because methanol is a hydroxyl radical scavenger [9] and prevents cellulose degradation in cotton fabric [9] as brought about by ozone due to its strong oxidation potential and its reaction chemistry which causes it to split to nascent oxygen atom rapidly generating free radicals like OH, HO2, HO3, HO4, RO, etc. [2] by interacting with all the intervening and the intermediate organic compounds as well as water [2,11,12], by increasing ozone selectivity [9], by chelating with the free radicals, inhibiting cellulose degradation by reducing its availability to ozone [13]. Oxalic acid is also a hydroxyl radical scavenger having capability to increase ozone selectivity and prevent cellulose degradation [9,14] but is highly sensitive to the reaction conditions, and performs best only under specified conditions (like low pulp consistency in wood pulp bleaching) and at lower doses (below 100 ppm) [13]. At higher concentration (as in the case of the present study), it causes such a decrease in pH that its ability to produce tendering effect dominates [8] resulting in decrease in ozone solubility and stability hampering it in its function [15]. Isopropanol has the ability to produce effect similar to methanol due to similar nature [9] but probably at higher concentrations. Sodium borohydride helps ozone access fabric micropores in stable form, assisting it to perform its function without the production of harmful hydroxyl and other free radicals [8,16].

Ozone’s efficiency to bleach raw cotton fabric in terms of whiteness can noticeably be increased with the use of additives that help increase ozone selectivity, solubility and stability or can act as hydroxyl radical scavengers. Methanol has proved the best among the selected additives (methanol, sodium borohydride, isopropanol and oxalic acid) as it has brought the maximum improvement in whiteness and absorbency, while simultaneously maintaining fabric burst strength above control (ozone without any additive). Mechanisms of chelation with deteriorating metals, radical scavenging and binding with cellulose to reduce its availability to ozone has caused methanol to stand out of the crew and increase whiteness and lower absorbency without damaging the fabric strength. Since methanol is a commonly available, economical additive, its use is best recommended as an additive in ozone bleaching, and a pilot-scale testing for ozone bleaching efficiency with methanol is recommended before the technique can be commercially applied. Moreover, optimization of the process parameters and the additive dosage beyond the selected doses is also suggested to be considered for future research.

Copyright: ©2017 Nazir A, et al. This is an open-access article distributed under the terms of the Creative Commons Attribution License, which permits unrestricted use, distribution, and reproduction in any medium, provided the original author and source are credited.