Connection between Molecular Genetics and Robotics, Since 1985

Copyright: © 2015 Bozinovski S, et al. This is an open-access article distributed under the terms of the Creative Commons Attribution License,which permits unrestricted use, distribution, and reproduction in any medium, provided the original author and source are credited.

In 1985 two works introduced connection between molecular genetics and robotics. One of them [1] related tRNA to a mobile robot, and the other [2] related genetic engineering to robotics. This editorial marks 30th Anniversary of those events.

Metaphors for Understanding Molecular Genetics, before 1985

A metaphor is understood as a paradigm transformation: using knowledge of a familiar system in order to understand the phenomena in another system.

Various metaphors are currently in use for understanding genetic information processing. Each of them has introduced its own concepts and terminology which is currently used molecular genetics. The following sections will mention four metaphors in use before 1985.

The second half of the 19th century was a period in which the interest of biologists was shifting from studying organisms, organs, or tissues to their component cells [3]. Schleiden and Schwann had previously shown that all tissues have a cellular origin and that both animals and plants consist of the same fundamental units of organization, cells, which interact to give rise to complex organisms [4]. In 1866, Haeckel proposed that the nucleus contains the factors responsible for the transmission of hereditary traits [5]. That caused increased interest in this cell organelle.

In search of nucleus content, in 1869 Miescher isolated a substance from lymphocyte cells [6]. He noticed that it is not a protein since sulphur was not present and phosphorus was present. So it was a new substance and he named the substance “nuclein”. In the 1879, Walter Flemming [7], introduced the terms “chromatin” and “mitosis”. Chromosomes were focus of the cell division in the work of Boveri in 1888 [8]. He pointed out that the chromosomes not only harbor the hereditary information in a cell, but that individual chromosomes carry different parts of the hereditary material.

In 1889 Altman, a student of Miescher, shifted the attention toward biochemistry by renaming the nuclein into “nucleic acid” [9]. Levene et al. determined differences between two nucleic acids, RNA (1909) and DNA (1929) [10]. So the shift was from nuclein as part of a cell nucleus to nucleic acid as a biochemical substance. “Life is chemistry” become a common wisdom.

As early as 1892 Miescher noticed that the “diversity of hereditary message might well be encoded in these, much as an alphabet of 24- 30 letters is enough to express all words and concepts in a number of different languages” [15]. In was the first idea that the hereditary information might be stored in a biochemical structure which represents string of letters. However, Miescher did not see it is sequence of letters in a nuclein, he thought that is sequence of letter in a protein.

In 1953 Watson and Crick proposed a model of DNA [16] that is a sequence of amino acids. In 1954 Crick proposed that “the sequence of bases act as a kind of genetic code” [17]. He had an idea that the pairs of bases correspond to the dots and dashes of a kind of Morse code. In 1956 the tRNA (transfer RNA) was discovered by Hoaland, Keller, and Zamecnik, along with enzymes which connect tRNA with amino acids (which are named aminoacyl-tRNA synthetases) [18]. In 1958 Crick introduced the Central Dogma of molecular genetics, pointing out that information flows from DNA to RNA and then to protein [19]. In 1963 rRNA was discovered by Rosset and Monier [20].

The concept of four letters by which the hereditary information is inscribed into DNA and then translated into protein was presented in 1960’, for example in the work of Cairns in 1966 [21]. The concept of transcription of genetic message from DNA to messenger RNA was used by Holley in 1966. He also explains the role of rRNA: “Messenger RNA transcribes the genetic message for each protein from its original storage site on DNA. Another kind of RNA – ribosomal RNA – forms part of the structure of the ribosome, which acts as a jig for handling the messenger RNA while the message is transcribed into a polypeptide chain” [22].

The linguistic metaphor is currently most widely used metaphor. The major contribution of this metaphor is the understanding that DNA is a string of letters, rather then just another acid. DNA, RNA, and proteins are strings (sequences) of their respective languages. Searching for sequence of letters led to the quest for human genome (e.g. [23]). The understanding the sequences of letters for various DNAs, RNAs, and proteins is now part of the post-genome informatics [24].

In 1985 the tRNA was recognized as a mobile robot [1]. It was a view of the project named Adaptive Industrial Robots carried out by the Department of Electrical Engineering of the Sts Cyril and Methodius University in Skopje, Macedonia. A new metaphor was proposed for understanding protein biosynthesis process, the robotics and flexible manufacturing metaphor [25-27]. Figure 1 shows the metaphor. 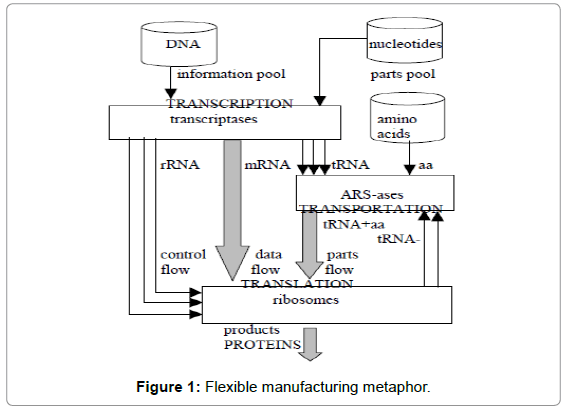 Figure 1 considers the protein biosynthesis in prokaryotes. There are three flows in the process, data flow (by mRNA), material flow (by tRNA), and control flow (by rRNA). Hence, mRNA supplies the product data, tRNA supplies the building blocks, and rRNA supplies software for carrying out the production process. In addition to standard transcription and translation process, a third process named transportation is added. In this process tRNAs shuttle as both unloaded robots (tRNA) and loaded ones (tRNA+aa). There are also two pools, information pool (DNA) and parts pool, the latter being divided into amino acid pool and nucleotides pool.

The Central Dogma of Molecular Genetics was revisited and restated as Central Dogma of Flexible Manufacturing in general, including the flexible manufacturing system in genetics. According to this metaphor, the information is stored in DNA database. Thus instead of the concept of sequence of letters it was considered a database with all the data and programs needed for cell production process.

Within this metaphor the cell is considered as an adaptive system which survives and interacts with its environment. The cell is integration of both information processing and material processing.

About the Active Role of tRNA and rRNA

Assigning role of the tRNA molecule in 1985 to be an active robot rather than an “adaptor molecule” was actually prediction of an active role of the tRNA. Before 1985, it was pointed out in 1982 by Cech and his team that an RNA sequence can have an active role: An RNA intron was discovered in the Tetrahymena organism which can excise itself out from the rest of the RNA sequence it originally belongs [30,31]. In 1983 it was pointed out that in the RNase P enzyme, the RNA part is actually a catalytic part [33]. Using FMS approach in 1986 an active role of rRNA itself was assigned to the rRNA, as software, and its 3D structure as a robot performing assembly actions in of the ribosome. Before 1986 it was a common belief that rRNA in the ribosome is just a passive structural rack which keeps the ribosomal proteins together, and that all the active roles of the ribosome are carried out by the ribosomal proteins. In 1991, Noller [33,34] has shown experimentally that rRNA has indeed a catalytic role.

Therefore, the robotics and FMS metaphor was able to predict active roles of tRNA and rRNA before such roles were considered in mainstream genetic research. Both tRNA and rRNA are 1D software for their 3D space structure in which they perform their robotic and processing functions. They belong to class of ribozymes, the RNAs which have enzymatic properties.

In 1985 two research directions, molecular genetics and robotics, previously considered as very distinct areas of research, were recognized to have something in common: the nanorobot structures. The tRNA was recognized as a robot [1] carrying out building blocks for protein assembly and genetic engineering was recognized as a way of designing biological entities including robots [2], in scale of cell bionanorobots to multicell robots.

As one of the application of this 1985 approach, it was pointed out that both tRNA and rRNA have active robotic role in a cell.