Copyright: © 2015 Xiangpo P, et al. This is an open-access article distributed under the terms of the Creative Commons Attribution License, which permits unrestricted use, distribution, and reproduction in any medium, provided the original author and source are credited.

Breast cancer is the most common female cancer in the world and constitutes nearly 30% of all cancers diagnosed in women [1]. In 2007 alone, about 537,000 women died due to breast cancer. It is clear that Cancer is a multi-factorial disease that results from complex interactions between environmental and genetic factors [2]. In breast cancer, the genetic factors contribute more to the causation of cancer than do lifestyle or environmental factors. More and more studies investigating the relationship between genetic polymorphisms and breast cancer susceptibility and progression are being reported. The MMPs are a subfamily of the metzincin superfamily, consisting of 26 related zinc-dependent endopeptidases [3]. Based on the structure and substrate specificity, MMPs can be divided into five groups: collagenases, gelatinases, stromelysins, matrilysins and membrane MMPs [4]. Studies have shown that MMPs are key mediators of (i) growth factor activation, bioavailability and receptor signaling, (ii) cell adhesion and motility, (iii) apoptosis and survival mechanisms, (iv) angiogenesis, and (v) inflammatory responses and immune surveillance [5-7]. Besides, MMPs have been implicated in tumor progression, and high levels of expression have been related to more aggressive tumor behavior and poorer patient prognosis [8-10].

Over the past few years, there have been a variety of studies showing evidence of functional SNPs in the promoters of MMP genes in relation to disease susceptibility and in particular to cancer risk [11,12]. For instance, polymorphisms in MMP1 (-1607 1G/ 2G), MMP2 (-1575 G.A), MMP3 (1612 5A/6A), and MMP9 (-1562 C.T), have been associated with several cancers, such as: lung cancer, head and neck cancer, renal cancer, oesophageal cancer and colorectal cancer. However, results for different MMP polymorphisms with breast cancer metastasis are inconsistent [13-17]. Therefore, we performed a meta-analysis of all eligible studies to derive a more precise estimation of the association to better understand its possible influence on breast cancer metastasis.

In this meta-analysis, a comprehensive literature research of the US National Library of Medicine’s Pub Med database, ISI Web of Knowledge, Medline, Embase and Google Scholar Search (update to August, 2011) were conducted using the search terms including (‘‘MMPs’’ or ‘‘matrix metalloproteinase’’),‘‘polymorphisms’’ , ‘‘breast cancer’’, ‘‘metastasis’’, and the combined phrases in order to obtain all genetic studies on the relationship of MMP polymorphisms and breast cancer metastasis. We also used a hand search of references of original studies or reviewed articles on this topic to identify additional studies. The following criteria was used to select the eligible studies: (1) a case– control study on the association between MMP polymorphisms and breast cancer metastasis, (2) detailed number of different genotypes for estimating an odds ratio (OR) with 95% confidence interval (3) when several publications reported on the same population data, the largest or most complete study was chosen. As a result, 5 eligible case–control studies were included in our meta-analysis.

Two investigators independently extracted data. For each eligible study, the following information was recorded: the first author’s name, the year of publication, country of origin, genotyping methods, racial descent of the study population, number of cases and number of controls with different genotypes, and results of studies.

The strength of relationship between MMP polymorphisms and breast cancer metastasis was assessed by using Crude OR with 95% CI. The dominant model (Zz+zz vs. ZZ) and the recessive model (zz vs. ZZ+Zz) were used in this study to evaluate the risk. Between-study heterogeneity was evaluated by Q-test. Fixed effects model was used to pool the data when the P-value of Q-test ≥ 0.05, otherwise, randomeffects model was selected. Both funnel plot and Egger’s test were used to assess the publication bias. (P<0.10 was considered representative of statistical significance). All statistical analyses were performed using STATA11.0 software and Review Manage (v.5; Oxford, England).

By the inclusion and exclusion criteria, 25 articles were found, but only 12 studies were preliminarily identified for further evaluation. After carefully evaluating the quality of the 12 remained articles, we excluded 7 studies, of which 2 studies had overlapped data and 5 studies did not report detailed genotype data or genotype frequency information for metastasis-positive/ negative cases. Finally, 5 relevant studies addressing four polymorphisms in four MMP genes involving 1,165 cases and 3,418 controls were selected in this meta-analysis (Figure 1). The main characteristics of these studies are shown in Table 1. Genotype distribution of the four MMP polymorphisms among breast cancer cases and controls of the 5 studies are shown in Table 2. None of the studies in controls had a deviation from Hardy-Weinberg equilibrium at a statistical significance level of 0.01 (Table 2).

Table 1: Characteristics of studies included in the meta-analysis.

Table 2: Genotype distribution of the analyzed four MMP polymorphisms included in the meta-analysis. 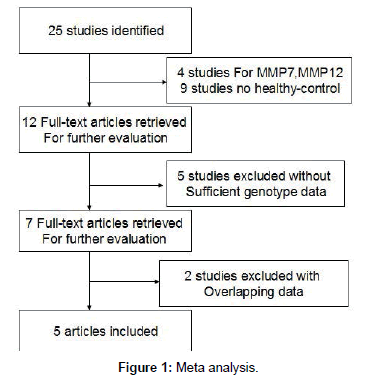 Table 3: Results of this meta-analysis for the four MMP polymorphisms and the risk of breast cancer metastasis.

To date, MMP2 and MMP9 have been the most extensively studied metalloproteinases in cancer patients. It has been shown that MMP2 expression is increased in cancer patients compared with controls. Moreover, increased expression has been associated with advanced stages of disease and worse prognosis [19]. In our study, we did not find significant association between MMP2 (-1306 C/T) and breast cancer metastasis. Because there is only one study for MMP2, the negative result does not mean that there was no association with metastasis. There is evidence indicating that a C/T polymorphism located at nucleotide position -1562 in the MMP9 gene promoter has an effect on MMP9 expression, with the T allele having 1.5-fold higher promoter activity than the C allele [20]. In a study of 270 patients with breast cancer and 300 controls, Przybylowska et al. [15] found that the T allele was associated with poor differentiation, tumor size but not with lymph node involvement. Besides, a study with 959 Swedish cases and 952 controls showed an increased risk of developing breast cancer in TT homozygotes but no genotypic effect on lymph node metastasis or differentiation [21]. Consistent with these studies, we did not find any association between MMP9 (-1562 C/T) and the risk of breast cancer metastasis. The promoter region of MMP3 is characterized by a 5A/6A polymorphism located at nucleotide position -1171 relative to the transcriptional start site, with one allele having six ad enosines (6A) and the other having five adenosines (5A) at the polymorphic site [22]. In vitro experiments showed that the 5A allele has approximately twofold higher promoter activity than the 6A allele [23-25]. Ghilardi et al. [13] reported a higher risk of metastasis in 5A homozygotes, which is in line with the results of Krippl et al. [14] who observed a higher propensity of lymph node involvement among patients with the 5A/5A genotype. In our study we found that the MMP3 can play a protective role in the breast cancer metastasis. In our meta-analysis, between-study heterogeneity from various factors including diversity in population characteristics, different sample size and genotyping methods. As in all research, our study has limitations. First, the controls were not uniformly defined. Second, there is only one study among Asians and the sample size is relatively small, studies involved in different ethnicities especially among Asians and Africans are warranted to estimate the effects of these functional polymorphisms on breast cancer metastasis. Third, due to the original data of the eligible studies are unavailable. We did not perform the analysis adjusted for some covariates such as: age, tumor size and steroid hormone receptor status. In conclusion, our results demonstrate that MMP1 could contribute the risk of breast cancer metastasis, while MMP3 played a protective role in breast cancer metastasis. Further studies are needed to evaluate these associations with breast cancer metastasis and their possible mechanisms.