+18023424982
Current Status of Ectoparasites in Sheep and Management Practices against the Problem in Ectoparasites Controlled and Uncontrolled Areas of Arsi Zone in Oromia Region, Ethiopia

Current Status of Ectoparasites in Sheep and Management Practices against the Problem in Ectoparasites Controlled and Uncontrolled Areas of Arsi Zone in Oromia Region, Ethiopia

Copyright: © 2015 Bedada H, et al. This is an open-access article distributed under the terms of the Creative Commons Attribution License, which permits unrestricted use, distribution, and reproduction in any medium, provided the original author and source are credited.

Small ruminants represent the most important part of the Ethiopian livestock system; about 24.2 million sheep are estimated to be found in the country [1]. In Ethiopia sheep is reared in all agro climatic zones. The highland area comprises 70% of the sheep, while the lowland pastoral and agro pastoral area have 30% of the sheep population [2]. However, the current level of contributions of sheep in Ethiopia is below the expected potential. Among major constraints hindering the productivity of sheep in the country are diseases, among which sheep skin diseases caused by ectoparasites accounts a wide range of health problems that confront the productivity. Ectoparasites are very common and widely distributed in all agro-ecological zones in Ethiopia [3].

The control program against ectoparasites and skin diseases have been designed by the Ministry of Agriculture and Rural Development of Ethiopia in 2005 and launched in Tigray, Amhara and Afar regions. In Oromia regional state this activity started in 2010 and still ongoing. Despite such national and regional efforts and emphasis given to the control programs against ectoparasites, some reports from north-west Amhara region indicate the problem seems to be still alarming [3,8].

According to Yacob Hailu Tolossa, Asnake Fekadu et al.[3,9] in many part of the Ethiopia, skin diseases due to ectoparasite have prevented many farmers from keeping sheep and becoming serious threat to sheep production. Despite the large population of sheep in Arsi zone of Oromiya region, ectoparasites are still among serious problems in the area [10]. Even though the Oromiya regional state has started control program against ectoparasites in some selected districts of east and west Arsi zone, the impact of this control program on the status of ectoparasitism was not yet studied. The objectives of this study were therefore (i) To determine the prevalence of major ectoparasites of sheep in selected districts of ectoparasite controlled and uncontrolled areas of Arsi zone (ii) Identify and assess the major risk factors associated with the problem (iii) to evaluate effect of ectoparasites on livelihood of the farmers.

This study involved three districts, peasant associations (PAs) and sheep as a sampling unit. The districts were selected purposively based on their representation of ectoparasite controlled and uncontrolled; five PAs from each district having the corresponding control status were also be selected randomly. Sheep found in selected PAs were selected randomly from animals grazing in communal pastures.

The required sample size was determined as described by Thrusfield [11]. The expected prevalence of ectoparasite was taken from previous work of Hailu [10] in the area before initiation of control program was 70% and by setting 95% confidence level and 5% desired level of precision. Based on the above formula and the livestock population of each study agro-ecology, a total of 969 sheep were examined for ectoparasites. Hence, 646 sheep where sampled from the controlled districts (Diksis and Tiyo) and 323 sheep were sampled from uncontrolled district (Guna).

A cross-sectional study was employed and animals were examined for presence of ectoparasites and skin lesions and after proper restraining and specimens were collected from ectoparasites positive animals.

969 sheep randomly selected from one uncontrolled district and two controlled districts were clinically examined for presences of ectoparasites skin and gross lesions. The sex, age and body condition of each sheep was recorded. The animals were categorized into two age groups, as young (up to one year) and adult (older than one year), as described by Gatenby [12]. Age was determined as indicated by owners and estimated by dentition. Body condition scores were determined by modifying the system of Gatenby [12] for sheep as either poor or good. A poor body condition score was given for sheep which were extremely thin, having prominent spinous and transverse processes into which a finger could be easily pushed and had less depth of loin muscle. A good body condition score was given for sheep when the spinous and transverse processes were smooth, rounded and well covered and with full loin muscle.

Clinical examination of each sheep was performed by multiple fleece partings in the direction opposite to that in which hair or wool normally rests, followed by physical inspection of the skin. The skin was palpated across all parts of the animal for the presence of parasites, and gross lesions suggestive of a clinical form of parasitic infestations. Animals found infested were considered positive.

Sheep keds, ticks, lice and fleas were collected manually from their sites of attachment. The ticks were removed from the host skins whilst retaining their mouth parts for identification using forceps. Coat brushing techniques were used for collection of lice. They were placed in labeled universal bottles containing 70% ethanol and identified under a stereoscopic microscope according to the descriptions of Walker [13,14].

A structured questionnaire was introduced to obtain general information on livestock ownership pattern, importance of keeping sheep, awareness of ectoparasites that affect sheep and their effect on sheep production and market value of the skin and the effect of ectoparasite control program in the area. For the sake of convenience of data and time management a total of 60 individuals who owns sheep were interviewed. For this purpose a total of 20 sheep owners were selected from each district (20 individuals from uncontrolled area and 40 individuals from controlled area). In addition structured questionnaire format was introduced to attain general information on the preconditions set by skin collectors to purchase skin, the cost of ectoparasite infested skin with respect to healthy one, the way of storing collected skin and what was the tannery looking while receiving the collected skin. Nine (9) skin collectors, three from each district were included in the study.

Raw data was carefully recorded and stored in Microsoft Excel database system used for data management. Statistical software package called SPSS for windows version 17.0 was used for data analysis. Descriptive statistics, percentages and 95 % confidence intervals were used to summarize the proportion of infested and non-infested animals. The effects of different environmental and host risk factors were analyzed by regression and χ2 test. Statistical significance was set at p ≤ 0.05.

Table 1: Prevalence of ectoparasites in controlled and uncontrolled areas.

Prevalence of ectoparasites by control status

Table 2: Summary of binary logistic regression of ectoparasites according to control status. 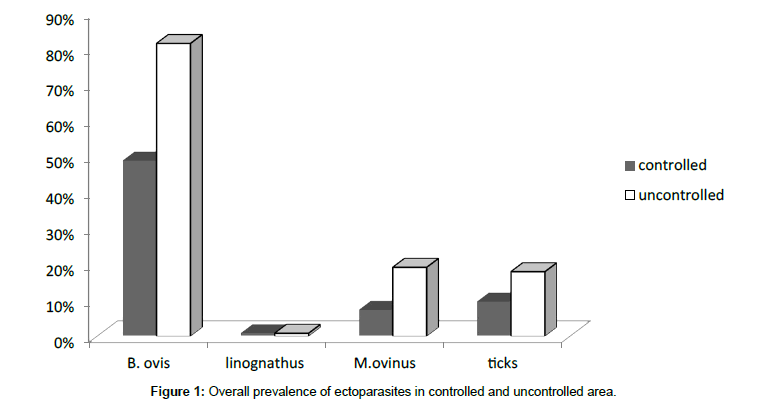 Figure 1: Overall prevalence of ectoparasites in controlled and uncontrolled area.

Prevalence of ectoparasites by sex

Table 3: Prevalence of ectoparasites in controlled and uncontrolled area by sex.

Prevalence of ectoparasites by age

Table 4: Prevalence of ectoparasites in controlled and uncontrolled area by age.

Prevalence of ectoparasites by body condition

Prevalence of ectoparasites by hair size/type

Table 6: prevalence of ectoparasites in controlled and uncontrolled area by hair type.

Prevalence of ectoparasites by management

Table 7: Prevalence of ectoparasites in controlled and uncontrolled area by management.

The overall prevalence of ectoparasite (p=0.000) and tick infestation (p=0.035) in female sheep of controlled area was significantly higher than male sheep. Female sheep were 0.455 times and 1.861 times at risk for overall ectoparasite infestation and tick infestation than male respectively. This finding probably attributable to several important factors such as ewes are kept by the farmer for long period of time for breeding purpose but male sheep are sold before two years of age, hence the treated ewes might be exposed to re-infestation as they stay on farm for long time. In addition during breeding season ewes are in close contact with many rams for long time which might increase the risk of getting ectoparasites from infested ram. Clinically affected and carrier animals are the source of infection [20]. Ewes might also acquire ectoparasites during nursing from infested lamb which was born after control campaign. Also some species of ectoparasite such as tick spend more time off the host and can exist for a very long period of time without feeding due to no more application of environmental treatment females those kept for breeding after control campaign might get infested.

The prevalence of lice was significantly higher in woolly sheep of controlled area than hairy sheep and wooly sheep of controlled area were 0.715 times at risk for lice infestation. Such difference might arise due to the fact that the skin’s microclimate is a significant factor in determining the size of the louse population on the sheep. Thinness of hair coats in coupled with high surface temperatures and increased exposure to sunlight is not favorable for survival of lice [23]. Sheep have heavy fleece provide a habitat which is readily colonized by lice and lice is susceptible to high temperature [14]. B. ovis was the most common louse that infesting sheep of both controlled and uncontrolled area. The prevalence of B. ovis recorded in uncontrolled area is comparable with results by Jemere [24] in central Ethiopia which was 83.23%.

The prevalence of M. ovinus recorded in the controlled area is comparable with work made in other parts of the country 3.47 % by Mulugeta et al. [17] from east Wollega in western Ethiopia. Similarly the findings of M. ovinus in sheep of uncontrolled area is in agreement with previous works conducted in different part of the country by Yacob et al. [18]; 19.1% from southeast part of Tigray region north Ethiopia, [26], 16.4% from central Oromiya and 20.1 % of sheep keds in Gondar from northwest Ethiopia by Kumsa et al. [22].

In conclusion, the most important ectoparasites identified in this study were lice, sheep keds and tick. Lice were the most abundant ectoparasite in both area followed by sheep keds and tick in uncontrolled area and tick and sheep ked in controlled area. In view of the findings of the present study it is possible to conclude that even though control campaign were implemented several species of ticks, lice, and M. ovinus represent still common health and productivity problems of sheep in both controlled and uncontrolled areas in Arsi zone. Age and management were not found as a risk factor of all ectoparasite infestation in the current study. However, sex, body condition and hair type were important factors for different ectoparasite infestation in current study. The problem is still very serious and there are still animals suffering from ectoparasitism in ectoparasites control campaign regions, threatening the national economy, sheep and goat population and tanning industries. Lack of awareness creation and absence of control on animal movement and poor quarantine policy might have resulted in ineffectiveness of the control campaigns. This threat of ectoparasites on overall sheep productivity and tanning industry in Ethiopia warrants urgent strategic control intervention based on peculiar characteristic of each agro-ecology.