Copyright: © 2014 Suzuki Y, et al. This is an open-access article distributed under the terms of the Creative Commons Attribution License, which permits unrestricted use, distribution, and reproduction in any medium, provided the original author and source are credited.

We report a case of elevated plasma N-acetyl-seryl-aspartyl-lysyl-proline (AcSDKP)-like immunoreactive substance (IS) level after multiple doses of a recombinant human erythropoietin (rHuEPO), darbepoetin alfa, in a 50 year-old Japanese female who underwent kidney transplantation. Plasma AcSDKP-IS levels showed a gradual decline after kidney transplantation. However, plasma AcSDKP-IS level showed a rapid rise on day 70, and remained at high levels for a period of time and then declined sharply on day 119. After maintaining relatively constant levels from day 119, plasma AcSDKP level showed a rapid rise again on day 168, and declined again on day 238. The two abrupt increases and subsequent sharp decreases of plasma AcSDKP-IS levels correlated temporally with the initiation and discontinuation of the two course of darbepoetin alfa. Although further detailed studies are necessary, administration of darbepoetin alfa may cause a marked increase in plasma AcSDKP level.

N-acetyl-seryl-aspartyl-lysyl-proline (AcSDKP) is an endogenous peptide released from its precursor (thymosin-ß4) by prolyl oligopeptidase (POP) [1,2]. AcSDKP is a natural inhibitor of pluripotent hematopoietic stem cell proliferation by preventing cells from entering S phase from G1 of the cell cycle [3,4], and is normally found in human plasma [5]. AcSDKP has been shown to suppress the proliferation of renal fibroblasts [6] and inhibit collagen deposition in cardiac fibroblasts in mice [7]. AcSDKP has also been shown to be a potent angiogenic factor [8,9] and it has been reported that AcSDKP levels were significantly increased in patients with cancer, such as hematologic malignancy [10] and papillary carcinoma [11]. Because AcSDKP is hydrolyzed by the N-terminus active site of angiotensin-converting enzyme (ACE) [12,13] and partially eliminated in urine [14], its plasma level is a result of a complex balance between its production by POP, hydrolysis by ACE, and renal elimination. Thus, plasma AcSDKP levels have been shown to increase in patients with chronic renal failure [15,16]. Le Meur et al have studied the relation between AcSDKP levels and the weekly dose of recombinant human erythropoietin (rHuEPO) for the treatment of renal anemia [16]. They observed that dialysis patients required significantly more rHuEPO when their AcSDKP levels were higher, indicating an inhibitory effect of AcSDKP on hematopoiesis. However, it has been uncertain whether accumulated AcSDKP reflected inhibitory effect on hematopoiesis or rHuEPO simply had a potency increasing plasma AcSDKP levels.

We measured plasma AcSDKP-IS level of this patient over time before and after kidney transplantation. This research was approved by the Institutional Review Board of Oita University Hospital. She received information about the scientific purpose of the research and gave written informed consent. Plasma AcSDKP-IS level was measured using an enzyme immunoassay [17]. 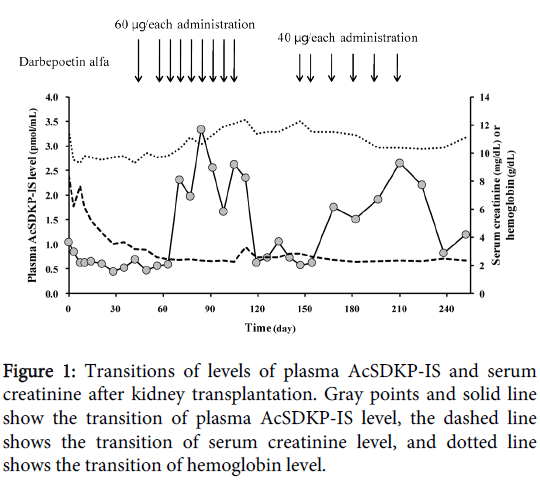 The clinical conditions of the patient remained unchanged during this period except for improvement in kidney function. The newly-administered drug after kidney transplantation was only darbepoetin alfa except for the immunosuppressions. Furthermore, twice abrupt increases and subsequent decreases of plasma AcSDKP-IS levels were observed after the initiations and discontinuances of darbepoetin alfa, respectively. These suggest that elevation of plasma AcSDKP-IS level in this case may be invoked by darbepoetin alfa, and increased AcSDKP may inhibit elevation of hemoglobin level after second administration of darbepoetin alfa. Le Meur et al had reported that the uremic toxin-like effect of AcSDKP accumulated by the renal involvement stimulated dose escalation of rHuEPO [16]. In this case, adversely, administration of darbepoetin alfa may originate the increase of plasma AcSDKP level, although the mechanism is unknown. Recently, kidney protective effects and tumor progressions were reported as the novel effect of rHuEPO [19-23]. AcSDKP also has similar effects [6,8,9], suggested that elevated plasma AcSDKP after administration of rHuEPO may be partially involved in the kidney protective effects and tumor progressions by rHuEPO.

We demonstrated a close temporal relationship between increase in plasma AcSDKP level and darbepoetin alfa administration, and hypothesize an involvement of AcSDKP in the observed effects of rHuEPO. Although further detailed studies are necessary, elevated plasma AcSDKP after administration of rHuEPO may be partially involved in the observed roles of rHuEPO in reno-protection and tumor progression.