+44-7482-878921
Death by Facial and Skull Injuries of a Motorcyclist Wearing a Full-Face Helmet: Case Report and Literature Review | OMICS International

Death by Facial and Skull Injuries of a Motorcyclist Wearing a Full-Face Helmet: Case Report and Literature Review

Copyright: © 2016 Ventura-Spagnolo E, et al. This is an open access article distributed under the terms of the Creative Commons Attribution License, which permits unrestricted use, distribution, and reproduction in any medium, provided the original author and source are credited.

We describe a case of death by facial and skull fractures with brain injuries of a motorcyclist wearing a full-face helmet. A 40-year-old man driving a high-powered motorcycle crashed violently into the rear of a stopped car. The main results from the autopsy revealed the deformation of the left orbito-zygomatic and fronto-temporoparietal regions corresponding to bone fractures with laceration at the left temporal lobe. The CT scan of the helmet revealed the detachment of the energy-absorbing liner. Moreover an impact speed of 93 Km/h resulted from the analysis of accident dynamics. We analysed the literature regarding the effectiveness of full-face helmets in reducing the risk of fatality and we sought the factors that may have deleted the protection offered. The lesions causing death were due to high speed and probably the inadequacy of the helmet.

The use of a protective helmet when riding motorcycles is a legal requirement in many countries around the world. Italian legislation making helmets compulsory was proposed in Bill 1720/2010 providing for the use of a full-face helmet and, in some cases, of adequate technical clothing for riders of high-powered two-wheeled vehicles. These proposals were implemented by article 33 of Italian Law 472/1999. Italian legislation states that all types of helmet must be approved by the Italian Ministry of Transport in compliance with EEC legislation [1].

The protection offered by helmets to reduce the severity of head injuries and the risk of death is a well-established fact for all recreational activities carrying a high risk of brain impact [2]. Several studies have demonstrated that the level of protection provided by this safety device for motorcyclists depends on variables such as helmet type, helmet fit, manner of wearing, crash speed, vehicle type and helmet ownership (driver or passenger) [3]. There is also statistical evidence of the significant protective effect of a full-face helmet compared with no helmet (OR 0.26, 95% CI from 0.14 to 0.47) and partial coverage helmets (OR 0.72, 95% CI from 0.38 to1.37) [4].

We report a case of death due to facial and skull fractures and brain injuries of a motorcyclist wearing a full-face helmet including an analysis of the causes that may have diminished the protection offered.

The case involved a 40-year-old motorcyclist wearing a full-face helmet and technical clothing, who while driving a high-powered motorcycle crashed violently into the rear of a stationary van, which had stopped on the road owing to a previous car accident (Figure 1a). Witnesses saw him travelling at high speed. Figure 1: a) Motorcycle impact site on the back surface of the stopped car. b) Body of the motorcyclist near the high-powered motorcycle.

The body laid on the road near the motorcycle (Figure 1b) and a cursory inspection showed the leakage of blood and brain matter from the opening of the helmet in correspondence to the broken visor. Once the police had completed their work and after forensic inspection at the scene, the body was taken to the Institute of Forensic Medicine for the necessary investigations.

Having acquired the technical details of the case, the Judicial Authority ordered that the autopsy be carried out within three days of the victim’s death. The body was well-preserved man and weighed 74 kg and with a length of 171 cm, wearing technical clothing and a fullface helmet. Toxicological examinations were carried out on samples of cardiac blood, urine and bile. All tested negative for alcohol and narcotics. The investigation concluded with histopathological examination of the organs using standard post-fixation, basic haematoxylin-eosin staining. Preparation of samples from the brain and other organs did not reveal any significant findings beyond those already seen in the autopsy.

Moreover we have examined the helmet shell that revealed no findings except for the rupture of the visor and its left docking site (Figure 3a). The full-face helmet weighed 1450 g. The shell was fiberglass with thickness of 3.1 mm, and the energy-absorbing liners was polystyrene with thickness of 38 mm. then in collaboration, with a radiologist was carried out a CT scan of the full-face helmet was carried out and the images showed only the detachment of the energyabsorbing liner (Figure 3b) on the left in correspondence to the broken visor attachment. The accident dynamics were analyzed in collaboration with an engineer (Figure 4). The speed of impact against the car was determined by studying energy dissipated by motorbike through; the deformation of the mechanical parts found on the machine, on the bike and by the swiping on the asphalt made in post shock of the bike and machine. 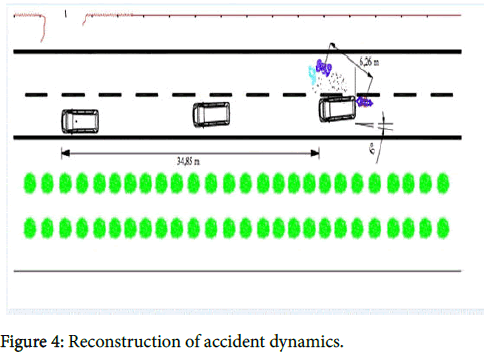 Figure 4: a) Reconstruction of accident dynamics.

The study of the different energy rates dissipated by the motorcycle indicated a vehicle impact-energy of 98.309 J, therefore the speed was:

However, the speed at the time the motorcyclist perceived danger would certainly have been greater than this.

In conclusion, the cause of the death was found to be severe head trauma with facial and skull fractures, subarachnoid hemorrhage and brain concussion resulting from the motorcycle crashing violently against an immobile obstacle (the stopped car) with direct impact of the motorcyclist’s head wearing a full face helmet against the rear of the stationary vehicle.

Examination of the literature reveals that most fatalities of motorcyclists wearing helmets result from thoracic and/or abdominal trauma. In some cases death is due to cervical spine injuries (by hyperextension of the neck) or to cerebral hemorrhage and contusions [5,6]. In the literature there are also reports of rare cases of death by complete decapitation [7].

Brain injuries are generally attributable to a deceleration force with rotational kinetic energy that produces indirect force effect lesions to the cerebral vessels and parenchyma [8]. Many statistical studies have demonstrated that full-face helmets are effective in reducing head and facial injuries and certainly the risk of death [9-12]. There is also some evidence to suggest that the protective effect of the device may be modified by other crash factors such as speed at impact, protection being lower for speeds over 50 kmph [4,9,13-15]. The literature also contains a study on the performance of common helmet types regarding their ability to attenuate impact over a wide range of impact severities and show that helmet responses vary with foam thickness and foam material but approved devices like full-face helmet have relatively similar responses up to impact energies of 150 J [16]. Therefore, the severe skull-facial injuries as the case described here are rare occurrences in motorcyclists wearing a full-face helmet. Another cohort study has demonstrated a link between facial fractures and skull fractures with brain injuries [17]. Indeed, the probability of skull fractures and brain lesions increases dramatically for cases with a facial bone fractures especially if these affect the upper bones. Kraus et al. sustain that facial bones, when impacted, transmit energy forces to the skull and brain. This finding also applies when a helmet is worn. However, the use of full-face type might decrease the risk of energy transfer to the facial bones and consequently the traumatic skull-brain injury.

The literature discussion and the lesions found in the case described herein suggest that when the motorcyclist crashed into the rear of the car with impact on the left side of the helmet, this caused energy transfer to the left fronto-orbito-zygomatic bones and then to the parieto-temporal bones and anterior and middle skull base with brain injury. Moreover, the mechanism producing thoracic vertebrae fractures can be the vertebrae compression for the energy shifting from the head to the spinal cord or the hyper-extension of column induced by violent impact.

Clearly, this proposed mechanism only applies to cases such as this with extremely violent impact where the impact energy was 93,309 J and speed 93 kmph.

It should be stressed that the reconstructed lesion mechanism leading to the motorcyclist’s death occurred despite his wearing a fullface helmet and the with an impact energy of less than 150 J. On the basis of the literature analysis, the causes of the ineffectiveness of the protection device should be sought in the helmet itself; its state of wear or the inadequacy of its energy absorbing liner. However, analysis of the case in question, with particular reference to the CT scan findings, suggest another causal factor. In fact, the evidence of the rupture at the visor docking site and the consequent detachment of the absorbent lining suggest that this region of the helmet may be a site of least resistance, especially bearing in mind that the energy absorbing liner is thinner in this part.

We described a case of death by facial and skull fractures with brain injury in a motorcyclist wearing a full-face helmet. The literature investigation and the evidence from the forensic investigation of the case presented have made it possible to attribute the motorcyclist’s death to a violent impact of the head against the rear of the car with violent impact energy. This highlights the ineffectiveness of the helmet to protect against the transfer of energy to the upper facial bones and then to the skull bones with brain injuries. High speed and probably the inadequacy of the helmet contributed to the lesions. In fact the device studied by the CT scan showed the detachment of the energyabsorbing liner where the left visor attachment had broken, thus visor anchor sites may be the areas of least resistance in helmets.

The conclusions obtained in this case emphasize that all contributory factors must be analysed when a reconstruction of the events and attribution of responsibility are required.