Copyright: © 2016 Hassan MZ, et al. This is an open-access article distributed under the terms of the Creative Commons Attribution License, which permits unrestricted use, distribution, and reproduction in any medium, provided the original author and source are credited.

In vitro anti-mycobacterial activities of dispiropyrrolidine derivatives along with their intermediates bisarylidene piperidones were investigated through high throughput screen. Our results revealed that dispiropyrrolidines possess promising activity against Mtb H37Rv. Compound 4g, 1-Methyl-4-(2,4-dichlorophenyl)pyrrolo-(spiro[2.3″]oxindole)- spiro[3.3′]-5′-(2,4-dichlorophenylmethylidene)piperidin-4′-one emerged as the most active antimycobacterial agent having EC50 of 2.46 μM and MIC at 10 μM against MTB-H37Rv.

Tuberculosis (TB) is a potentially fatal airborne infection caused by Mycobacterium tuberculosis (Mtb) typically affecting the portal of entry of the body i.e., lungs but can infects other sites as well [1]. According to World Health Organization (WHO), around thirty-three percent world's population has been infected by TB bacterium and more than 1.5 million TB related deaths have been recorded in the year 2014 (Global tuberculosis report) [2]. Emergence and increasing prevalence of multiple drug-resistant (MDR) and extensively drug-resistant (XDR) TB has caused a disastrous global epidemic. Globally around 0.5 million new cases of MDR-TB and 0.2 million MDR-TB related deaths occurs annually. New clinical cases of XDR-TB are also on the rise making up about 10% of all MDR-TB cases [3,4]. The present treatment of TB covers around 10 drugs of different chemical classes approved by the FDA (Food and Drug Administration) of which isoniazid (INH), ethambutol (EMB), rifampin (RIF) and pyrazinamide (PZA) form the core of treatment regimens (1st line drugs) [5]. However, despite of these powerful arsenals, the treatment of TB is still inadequate due to its extended treatment regimens, poor drug toxicity profiles, drug resistant TB, limited chemical diversity and poor entry of drugs molecules into the cell [6]. Thus, the developments of safer and effective new class of anti-TB drugs are urgent priorities for the control of TB.

Heterocyclic compounds bearing isatin represent a potential structural motif possessing diverse pharmacological properties such as antibacterial, antifungal [7], anticancer [8] and antimycobacterial [9]. Moreover, the chemistry of spiro compounds has gained considerable momentum due to their synthetic and effective biological significance. For example, spiropyrrolo-oxindole is a core constituent of many naturally occurring alkaloids and biologically active compounds especially antimycobacterial (Figure 1) [10,11]. Our earlier studies have also confirmed that certain compounds bearing dispiropyrrolidine system possess significant antimycobacterial activity [12]. Encouraged by these observations and as a part of our research program on the synthesis of spiro compounds [13,14], in the present investigation we are reporting the in-vitro antimycobacterial activity of piperidone substituted dispiropyrrolidines. Synthesis and antiproliferative potentials of these compounds have also been reported earlier by our group [15].

The test samples were analyzed in vitro against Mycobacterium tuberculosis H37Rv (Mtb H37Rv) in a high throughput screen using an assay adapted from the microdilution AlamarBlue (AB) broth assay as reported by Collins et al. [16]. All the operations of Mtb H37Rv were conducted in accordance with the Biosafety Level 3 restraint [17]. The media was added to 96 microtitre well plates with the drugs followed by the addition of culture (diluted × 1000) which were then serially diluted. Incubation was carried out at temperature of 37°C for 48 h then AB dye was added to the plates and incubation was further extended for another 24 h. Controls was taken as a media and the solvent of same concentration used to dissolve the drugs. The plates were analyzed fluorometrically and the reduction of bacterial proliferation was calculated according to the manufacturer’s formula.

The cellular conversion of MTT (3-(4,5-dimethylthiazo-2-yl)-2,5-diphenyl-tetrazolium bromide) into a formazan product was used to evaluate the cytotoxic activity (IC50) of compounds against a mammalian Vero cells, using the Promega Cell Titer 96 non-radioactive cell proliferation assay [18]. The test compounds were dissolved in DMSO and serially diluted with complete medium to get the range of test concentration. DMSO concentration was kept at 0.1% in all the test compounds. Cell lines maintained in appropriate conditions were seeded in 96-well plates and treated with different concentrations of the test samples and incubated at 37°C, 5% CO2 for 96 h. MTT reagent was added to the wells and incubated for 4 h; the dark blue formazan product formed by the cells was dissolved in DMSO in a safety cabinet and read at 550 nm. % inhibitions were calculated and plotted with the concentrations and used to calculate the IC50 values in micromoles.

The most active antitubercular compound 4g was docked into the active site of enzyme type II dehydroquinase (DHQase) using Glide (version 5.7, Schrödinger, LLC, New York, NY, 2011). The crystal structure of Mtb Type II DHQase (PDB ID: 1H0R) was retrieved from the RCSB Protein Data Bank (PDB) and was preprocessed, refined and minimized using Protein Preparation Wizard. The ligands were optimized using LigPrep to obtain the lowest energy state. Glide program was used for the docking study, treating the ligand with fully flexible all atom depiction and receptor with rigid grid representation. van der Waals radii scaling factor of 1.00 with a partial charge cut-off of less than 0.25e was applied for the generation of grid.

All the synthesized compounds 4a-n including their intermediates 3a-n (Scheme 1) were assessed for their in vitro inhibitory activity against the Mycobacterium tuberculosis H37RV (MTB-H37Rv) by BTG (BacTiter-Glo™) Microbial Cell Viability assay which is a quantitative ATP assay for bacteria utilising luciferase generation as end-point detection. The results of the antitubercular screening of compounds are presented in Table 1 and compared against five standard anti-TB drugs. Among the twenty-eight compounds tested, only five compounds 3g, 4d, 4f, 4g, and 4k showed promising results with MIC value ≤ 25 µM comparable to cycloserine (25 µM) and pyrimethamine (100 µM). But, not a single compound is as potent as standard drugs isoniazide (0.31 µM) and amikacin (0.16 µM). Compounds 3g and 4g were found to be most active compounds against MTB-H37Rv with MIC of 10 µM. The inhibitory concentrations EC50 and EC90 values for compound 3g were found to be 4.46 µM and 8.42 µM, respectively whereas for compound 4g, it was 2.46 µM and 5.42 µM, respectively (manifold higher than cycloserine and pyrimethamine). This clearly indicates that cyclization of arylidene into spiropyrrolidine nucleus resulted into enhanced activity. Compounds 4d, 4f, and 4k showed moderate inhibitory activity against MTB-H37Rv with MICs 25 µM. The substituents on the aromatic ring played a key role in varying the efficacy of antimycobacterial activity. The general structure-activity relationship (SAR) of these compounds showed that the derivatives having electron-withdrawing groups were more active than derivatives having electron-releasing groups. Among the lipophilic electron-withdrawing groups (+σ/+π) only ortho and para substituted chloro and fluoro derivatives more active. On the other hand, ortho, para disubstitutions with chloro group at the phenyl ring resulted into higher inhibitory activity against MTB.

The hydrophobic character of a bioactive compound strongly affects its biological properties. Thus quantitation of hydrophobicity of compounds is of importance in drug design studies. The logarithm of partition coefficient (log P) is widely used as an index of hydrophobicity [19]. Therefore, clog P of each compounds (except 3h and 4h) were calculated using the commercially available program ChemDraw Ultra 11.0 (Table 1). When a regression analysis was carried out on the plots of the log 1/C values in terms of the corresponding partition coefficients (clog P) for each compounds, a positive but weak correlations having r2=0.0692-0.1906 were obtained (Figure 2). The linear relationship between log 1/C and clog P has been best fitted. The following general regression equation was therefore applied. Y=Ax+B; where, Y=log 1/C; X=Calculated log P; and A and B are constants. These non-significant correlation results may be explained by the literature which revealed that lipophilicity of the molecule which aids cellular penetration is not the only determinant indeed, optimal drug-receptor interaction also influence their effects [20]. Therefore, further studies regarding quantitative structure–activity relationships (QSARs) considering other descriptors are in progress in our laboratory.

Table 1: HTS antimycobacterial activity and cytotoxicity of 3a-n and 4a-n. 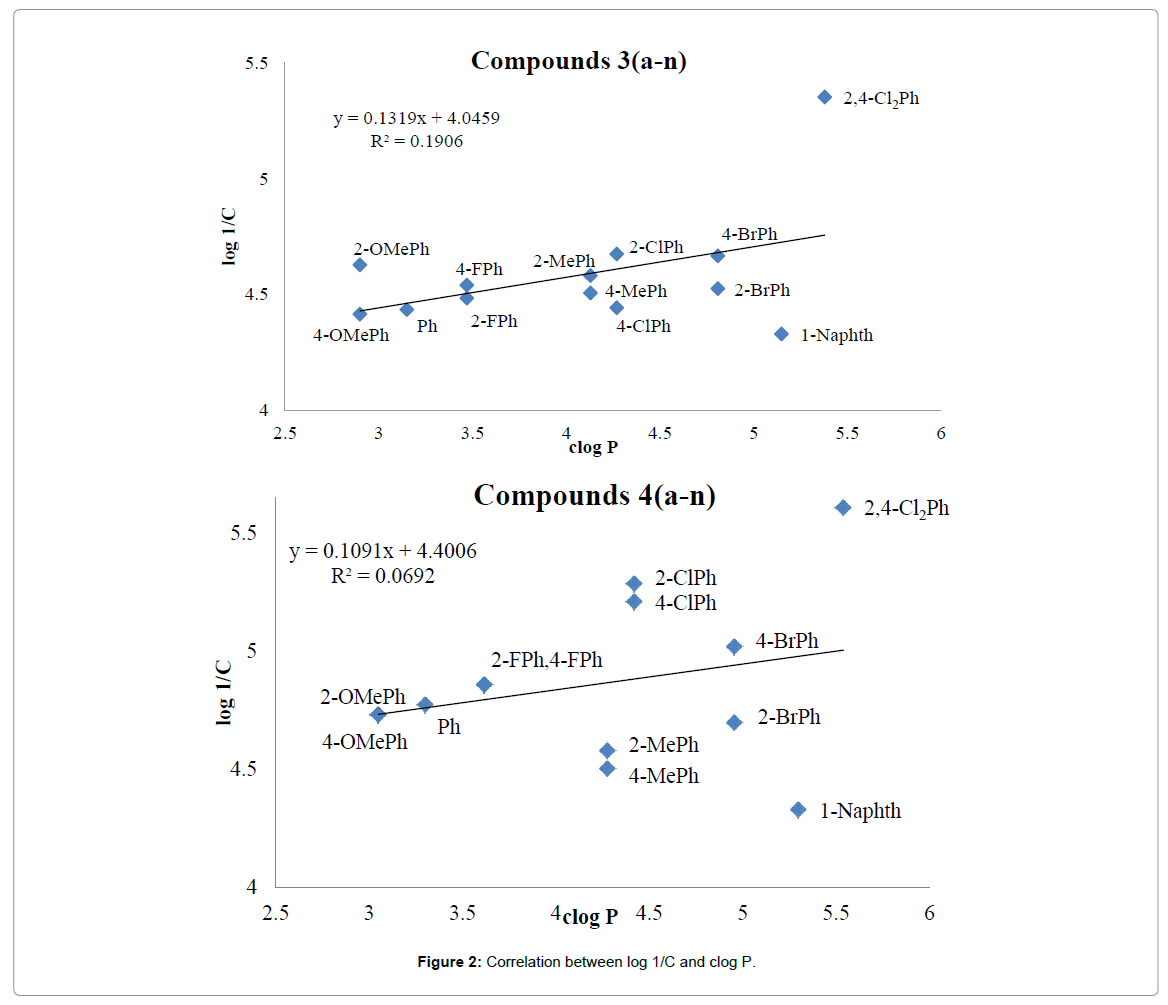 Since, none of the clinically available anti-TB drugs are perfect and most of them are suffering from chronic and acute adverse effects therefore, the present study also focuses on the toxicity studies of the synthesized compounds. The cytotoxic effects (IC50) of the compounds were evaluated against the VERO cells. All the tested compounds showed IC50 values more than 62.5 μg/mL. These high values clearly demonstrate that all the compounds were safer and effective antitubercular agents [21].

Enzyme type II dehydroquinase (DHQase) from the shikimate pathway is essential for Mtb survival which catalyses the conversion of 3-dehydroquinate into 3-dehydroshikimate. Moreover, this pathway is absent in mammals, thus type II DHQase is a validated safer target for the development of new antimycobacterial agents [21]. Therefore, to gain further evidence regarding the antimycobacterial potential of compound 4g, a molecular docking study was carried out in Glide 5.7 program (Schrödinger Inc. USA). The best binding modes of compound 4g in the active site of Type II DHQase are presented in Figures 3 and 4. Type II DHQase active site composed of Pro11, Asn12, Leu13, Arg19, Tyr24, Asn75, Gly77, Gly78, His81, His101, Ile102, Ser103, Arg108 and Arg112. Results showed that, compound 4g docked essentially at the same binding pocket as the native ligand in the crystal structure, by forming hydrogen bonding, polar and hydrophobic interactions with amino acids in the active site. The substituent 2,4-dichlorophenyl formed π-π stacking with Phe 111 (1.816 Å) and π-cation interaction with Arg 19 (2.911 Å). This is corroborated well by the predicted SAR that, the disubstitutions with chloro group at the phenyl ring resulted into more active compounds. Compound 4g also displayed hydrophobic interactions with Pro11, Leu 13, Tyr 24 and Phe 111. Other than the important residues in the active site, there is additionally hydrogen bonding formed between the oxygen atom of indolin-2-one and Arg 112 at a distance of 1.966 Å. Thus the antimycobacterial effects of dispiropyrrolidines derivatives might be due to inhibition of enzyme Type II DHQase. In summary, we have reported the antimycobacterial activities of a series of piperidone substituted dispiropyrrolidine. The results of preliminary antimycobacterial evaluation showed that, compound 4g, 1-Methyl-4-(2,4-dichlorophenyl)pyrrolo-(spiro[2.3″]oxindole)-spiro[3.3′]-5′-(2,4-dichloro-benzylmethyl-idene)piperidin-4′-one emerged as a lead compound having prominent antimycobacterial activity without any cytotoxic effect. Thus the series provided new opportunities for possible modification and future exploitation to get the derivatives having better potency than the currently available drugs.

The authors wish to express their gratitude and appreciation to School of Chemical Science, Universiti Sains Malaysia, Penang, Malaysia for supporting this work. This work was funded through Research Grant No. FRGS/203/6711462.