Hydroacoustic method has been used in various field of marine research. Use hydroacoustic method is a method developed to obtain information about the mangrove crab (Scylla sp.). This study analyses the value Target Strength (TS), Power Spectral Density (PSD), and Fast Fourier Transform (FFT) used the instrument hidroakustik. Data collection was performed at the Laboratory of Marine Acoustics using instruments CruzPro PCFF-80 operated with a frequency of 200 kHz. Results of detection of the target by looking at the value of Target strength, strongest TS value can be seen at a depth of 0.6 meters from the transducer with estimations it is the result of target detection. The target strength (TS) of the mangrove crab (Scylla sp.) ranged between –50 and –54 dB. TS value at ping number of 0-500 have a greater value is the value of -55 dB, TS value at that time have in common with TS value at ping number 2500-3000. SV value is no different than the value of TS is caused using 1 target. Echo level (EL) value versus time has highest peak in the range of 115 dB with the lapse ping number is 15-25, with values that are at the end of the echo of ping number of 70 with value is 132 dB rated Power Spectral Density (PSD) is actually located at 2900 s, and depth of a pool is not affect the value of backscatter targets.

Hydroacoustic instruments have been an indispensable tool to study the ocean. Echo sounder is one of the acoustic instruments used to remotely classify distributions of biological organisms such as fish and plankton [1], and Cruzpro instrument, substrate category using hydroacoustic have been done [2,3]. Research on the Power Spectral Density (PSD) of mammals has been done [4,5]. Mangrove crabs are one type of commodity that potential to be cultivated and consumed because it has a high economic value, especially crabs mature gonads or is laying eggs, adults and obese [6]. The existence of this species has been widely cultivated in ponds, and crab seeds taken from nature, as has been done cultivators in Karawang, West Java. Broadly speaking, mud crab farming system which has been recognized by dmasyarakat is an enlargement of the seed becomes crab size of consumption, fattening, production of soft shell crabs and crab spawn production. Mangrove crabs caught from the waters of estuaries and channels ponds. Mud crabs prefer to live in relatively shallow waters with muddy grounds. Areas suitable for the location of crab cultivation is essentially a muddy pond with a temperature of 25-35°C, pH 7.0-9.0, DO more than 5 ppm, and salinity ranges from 10-30 ppt [7].

Mangrove crab known as carrion eating everything (omnivorousscavenger). Mangrove crabs generally prey on gastropods, bivalves and a variety of small animals they can catch, but they are also scavengers enterprising (vigorous scavenger) [8]. As scavengers they are easily caught by baited traps in both the commercial and recreational arrest [9]. Mangrove crabs are voracious scavengers (scavenger voracious), which can search for and prey carcasses in the murky waters and estuarine mangrove forest [10]. Figure of mangrove Crabs (Scylla sp.), will be showed in (Figure 1).

Hydroacoustic technology utilizes underwater search with a strong voice to detect, observe and calculate the physical and biological parameters. Hidroakustik technology is a popular method used for many years in a survey of fishery resources. Research in the field hidroakustik continues to experience significant growth. Based on the theory and formula hidroakustik, this technique is now being adopted to survey coral reefs. Their growing need to classify and map the marine ecosystems at various spatial scales in favour of science-based ecosystem for marine management [11,12] (Figures 2 and 3). 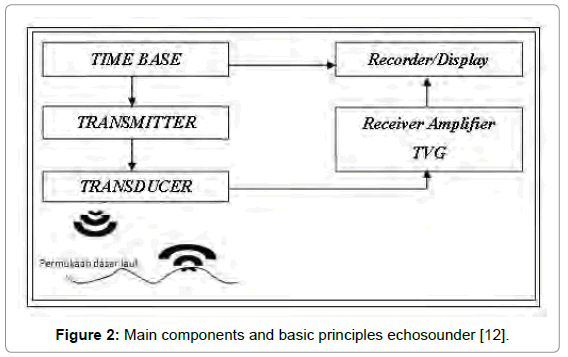 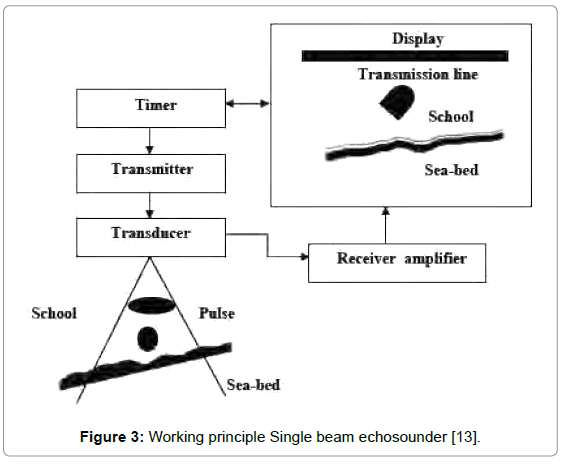 The transducer is used for recording data can be placed on an order that has been modified to avoid the influence of waves. This research will use an acoustic frequency. The results obtained with the acoustic method can be combined with the visual observation by taking a photo or image. Studies evaluating the mud crabs using hidroakustik still not been done. Therefore, the research to be able to analyze the existence of mangrove crabs acoustically by using the acoustic method of a single beam echosounder. This study provides quantitative information about the value of backscatter from mangrove crabs. Mangrove crab is also a valuable economic and highly prevalent Area-rich coastal mangrove forests.

Tools and materials used in research methods can be seen in Tables 1 and 2, and the instrument.

Collecting data in this research carried out in two ways, namely by visual observation (direct observation) and using the acoustic method performed on an investigation. Watertank experimental in research can be seen in (Figure 4). 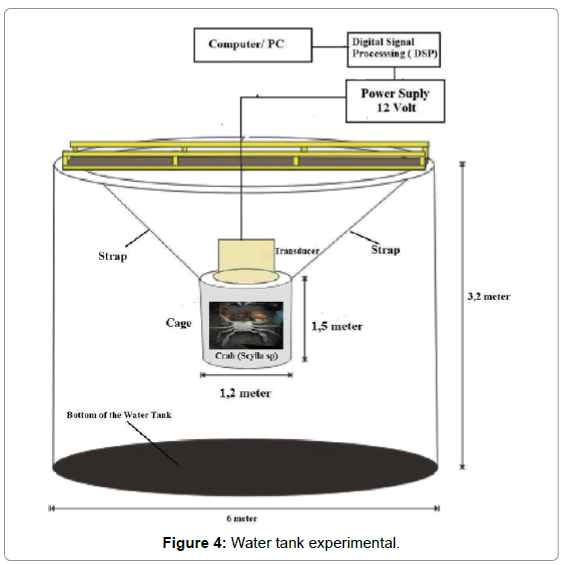 Tools used for recording acoustic data is a single beam echosounder CruzPro PcFF80 with the type of transducer THDT-5 Bronze Long Stem Thru Hull used as a means of sounding the seabed to identify each type of substrate reflection waters (coral and sand). Before performing an acoustic sounding process, first performed the process of setting tool (Table 3). Transmitter power used at the making of acoustic data is 320 watts. A process flow chart recording acoustic data using PcFF80 Cruzpro can be seen in (Figure 4) is a flow chart of data retrieval using Cruzpro, (Figure 5) will be showed about methodology flowchart of research (Figures 5 and 6). 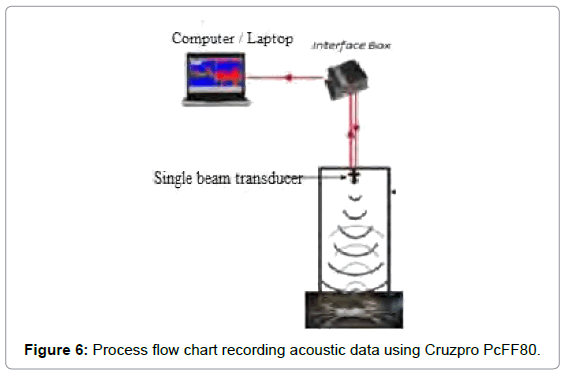 Ir: intensity of the reflected sound.

Ii: The intensity of the noise coming.

Power Spectral Density (PSD) is defined as the amount of power per frequency interval, in the form of mate, tinkers:

When recording the data, the transducer emits sound waves so that the displacement of energy on the environment. The energy emitted by the transducer into a medium may disappear along the sound propagation in the medium. The process of energy loss is dependent on the distance between the point of observation to the transducer. Near field is the distance from the transducer surface to a distance where there is a high fluctuation of the intensity or pressure [13]. Lurton, Urick, Pujiyati [14,15,16] also explained that the near field (fresnel zone) is a zone of influence from different points of phase with one another when the transducer transmits sound. Image result of the relationship between time with the target value can be seen in (Figure 7). Figure 7: Relationship of time to the target strength (TS).

Results are shown in Figure 7 is generated when the relationship between the value of TS with a maximum depth is 2.5 meters, and the average value of Target Strength (TS) is - 60 dB. TS value at ping number of 0-500 have a greater value is the value of -55 dB, the value TS at that time have in common with TS value at ping number of 2500- 3000. Results of detection of the target by looking at the value of TS can be seen the value of TS strongest at a depth of 0.6 meters from the transducer to estimate this is the result of the detection of targets detected by Cruzpro. Echo value level 1 (E1) can be shown at a depth of 1.5 meters with a value of -70 dB, while the value of E2 is located at a depth of 2 meters with a value equal to -70 dB, TS value of E1 indicated by the black line. Results time relationship with the depth can be seen in (Figure 8). The target strength of the mangrove crab ranged between –50 and –54 dB, this research have similar results to the study of the red crab in mexico [17]. Figure 8: Time relationship with the depth.

In Figure 8 above were obtained relationship between Echo level versus time has the highest peak is at 115 dB with a time range that is on the interval 15-25 s, with the final value echo that is currently on time 70 s with a value of 132 dB. Echo level (EL) of target is 115 dB in time range 15-24 s, Echo Level (EL) of bottom is 132 dB with time 71 s, this result of echo level have be same according in [18]. Results Fast Fourier Transform can be seen in Figure 9.

From Cruzpro used has a frequency of 200 KHz while the results are displayed in Figure 10 shows the effects of changes between the frequency domain with the time domain will divide the frequency value is for 2, speed amplitude value in domain 1 is 0.5 × 106, and domain 2 is 8.2 × 106. In the sample frequency shown which has a 200 KHz, although using tools with different specifications but the results and the methods used are similar to [2,3,19]. Results of Power Spectral Density (PSD) of mangrove crabs can be seen in Figure 10.

Figure 10 shows the highest spectral value at the time of the 2900 s are shown in the image above is pink and the lowest value of the resulting PSD crab is in the range of 1000-2400 s time and time range of 3000 -3500 s. this proves that the peak frequency of the value of Power Spectral Density (PSD) actually is located at 2900 s [20], hydroacoustic result and behaviour the mangrove crabs in tank have similar according in [21,22].

From this research has been done using echosounder (Single beam, scientific echosounder (Cruzpro PcFF80) showed no difference between the value of Target Strength (TS) with a value Scattering Volume (SV) using 1 target is mangrove crab, and the depth of a pool is not affect the value of backscatter targets.