Detection of Glyphosate Residues in Animals and Humans

Detection of Glyphosate Residues in Animals and Humans

Glyphosate (N-phosphonomethyl glycine) is registered as herbicide for many food and non-food crops as well as non-crop areas where total vegetation control is desired. The predominating uses of glyphosate, in descending order, are stubble management, pre-sowing application and pre-harvest application (desiccation). Glyphosate is also used to prevent weeds in fields with glyphosate resistant genetically modified (GM) crops like soybean, rapeseed, corn, etc. Since 1996 the amount and the number of genetically engineered crops dramatically increased worldwide. It is estimated that 90% of the transgenic crops grown worldwide are glyphosate resistant [1]. The rapidly growing problem of glyphosate-resistant weeds is reflected in steady increases in the use of glyphosate on crops. Steams, leaves and beans of glyphosate resistant soy are contaminated with glyphosate. Moreover, due to the intensive use of glyphosate it was frequently detected in water, rain and air. Chang and coworkers [2] detected glyphosate concentrations in air and rain up to 2.5 μg/L in agricultural areas in Mississippi and Iowa. In Europe GM soybean for food and feed was admitted in 1996. All animals and humans eating this soy chronically incorporate unknown amounts of this herbicide. Residues of glyphosate in tissues and organs of food animals fed with GM feed (soybean, corn, etc.) are not considered or neglected in legislation. The influence of glyphosate residues on the quality of animal Products intended for human food is almost unknown. The incorporation of GM soybean meal in broiler feed significantly affects the color parameter for breast muscles [3]. In contrast Erickson and coworkers [4] did not find any effects on the performance and carcass characteristics of feedlot steers. Furthermore, glyphosate is a potent chelator fixing trace and macro elements [5-7].

The mode of action of glyphosate is through specific inhibition of 5-enolpyruvyl shikimate 3-phosphate synthase (EPSPS), an enzyme of the shikimate pathway that governs the synthesis of aromatic amino compounds in higher plants, algae, bacteria and fungi [8]. As this enzyme is absent in mammals it is often assumed that glyphosate is not harmful for mammalians. Even so, there is an ongoing debate about the safety of this herbicide. Firstly, long-term toxicology of the low glyphosate residues has not been investigated in vertebrates. Secondly although EPSPS is absent, glyphosate has been reported to inhibit other enzymes, e.g., enzymes of the cytochrome P450 (Cyp450) family [8]. Other inhibition pathways are reported. Richard et al. [9] reported that such as glyphosate inhibits Cyp450 aromatase inhibition, indicated crucial for sex steroid hormone synthesis.

Glyphosate also interferes with cytochrome P450 enzymes which include numerous proteins able to metabolize xenobiotics [10]. This may also act synergistically with disruption of the biosynthesis of aromatic amino acids by gut bacteria, as well as impairment in serum sulfate transport. Recently, it was suggested that gastrointestinal disorders, obesity, diabetes, heart disease, depression, autism, infertility, cancer and Alzheimer’s disease are associated with Western diet [11]. Furthermore, genotoxic activity [12], teratogenic activity [13], and disturbance of the normal gut bacterial community [14,15] due to glyphosate are reported. Glyphosate showed cytotoxic effects on different cells in vitro [16-18], and Barbosa et al. [19], proposed that glyphosate may have contributed to the Parkinsonism due to its chemical similarity with glycine, a co-factor required for activation of the N-methyl-d-aspartase (NMDA) receptor, which controls excitatory actions in the central nervous system and is also involved in memory and learning. However, in clinical studies has not shown NMDA activity in relation to glyphosate poisoning [20].

The aim of the present study was to investigate if glyphosate residues in different biological samples from humans and animals can be used to gain insight in the exposure situation.

Prepared samples were tested for glyphosate concentration by ELISA using glyphosate ELISA kits (Abraxis, USA) according to the manufacturer´s protocol. Test validation of ELISA was done in comparison with GC-MS and the Spearman rank order correlation analysis was calculated for human urine (N=14), cows urine (N=21), cow tissues (N=16), and rabbit urine (N=13). To study the recovery rate of glyphosate, meat samples were spiked with 100 μg of glyphosate which was carefully distributed in the meat and processed as mentioned above then the glyphosate was measured in the supernatant using ELISA.

Glyphosate in urine and tissue samples was measured according to the procedure of Alferness and coworkers [21] with some modifications. Briefly, all chemicals used were of analytical grade unless stated otherwise. Urine samples and prepared tissue samples were thawed and equilibrated to room temperature. Samples were vortex mixed prior to transferring 100 μl aliquots to 10 ml screw-capped glass tubes containing 1 ml of acetonitrile. To each sample internal standard solution containing 13C215N-Glyphosate was added. After evaporation to dryness in a vacuum centrifuge, for derivatization 0.5 ml of 2,2,2-trifluoroethanol and cautiously 1 ml of freezing cold (-40°C) trifluoroacetic anhydride were added to the residue. The mixture was vortex mixed briefly and sonicated for 10 min and heated to 85°C for 1 h. After cooling the tube was uncapped and the solution was cautiously evaporated at 80-85°C without a stream of air or nitrogen. After cooling, the oily residue was dissolved in 200 μl of acetonitrile. The samples were measured using a GC-MSMS system. This system was composed of a gas chromatograph 7890 A equipped with a split/ split less injector connected to 7000 Triple-Quad mass spectrometer operating in the chemical ionization (NCI) -Mode (both instruments from Agilent Technologies, Waldbronn, Germany).

The correlation coefficients between ELISA and GC-MSMS were 0.96, 0.87, 0.97, and 0.96 for cattle urines, human urines, rabbit urines and tissues, respectively, (Table 1). The recovery rate of glyphosate in spiked meat was 91% (Table 2).

Glyphosate excretion in German dairy cows was significantly (P<0.0001) higher than Danish cows (Figure 1A). Surprisingly, cows kept in GM free region had significantly (p<0.001) lower glyphosate concentrations in their urine compared with cows under conventional husbandry (Figure 1B). Also glyphosate was detected in different organs of slaughtered cows including intestine, liver, muscles, spleen and kidney (Figure 1C). There were no significant differences of glyphosate residues in these organs. 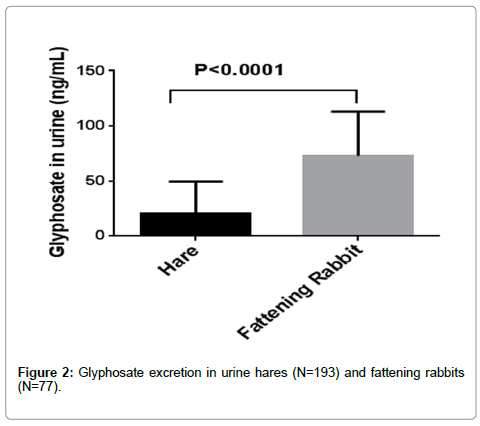 Figure 3: Glyphosate in humans. A) Comparison of glyphosate excretion with urine of humans with conventional (N=99) and predominantly organic (N=41) feeding. B) Glyphosate in healthy (N=102) and chronically (N=199) diseased humans.

Excreted glyphosate in urine of Danish cows was significantly higher than from German cows and represents a higher intake from feed. Interestingly, the glyphosate concentration in German dairy cows kept in a GM free region excreted much less glyphosate than conventionallymanaged cows. Thus, the prohibition of GM grains and soy prevent these animals from consuming glyphosate with their feed. Since organic farmers don`t live in an isolated area, the presence of low levels of glyphosate could be attributed to contamination by air and rain [2]. The presence of glyphosate residues in organs and meat of cattle is not a surprise since cows excretesignificant amounts of glyphosate in urine. An animal study with Sprague-Dawley rats reported that approximately 35-40% of the administered glyphosate dose was absorbed from the gastrointestinal tract so that urine and feces were equally important routes for elimination after one oral application [24]. These authors also found that glyphosate accumulated in bones. Considering the strong chelating stability of glyphosate for calcium, accumulation in bones is not surprising. Our own results showed that glyphosate is detectable in intestine, liver, muscle, spleen and kidney tissue.

Hares are among the first animals to enter fields after glyphosate is applied before sowing, in no-till cropping, and with pre harvest desiccation. Surprisingly,the many fold higher glyphosate excretion of domesticated rabbits than of hares (Figure 2) or Danish dairy cows was not anticipated, but probably reflects the high levels of glyphosate in their feed Tedesco et al. [25] evaluated the possible effects of GM soya bean on cell metabolism of rabbits. Although no differences in enzyme levels were detected in serum, a significant increase of lactic dehydrogenase, mainly the LDH1 iso-enzyme, was found especially in the kidney and heart.

Exposure of mammals to glyphosate may cause loss of mitochondrial transmembrane potential and result in oxidative stress to liver and brain [27,28]. Both apoptosis and autophagy are involved in glyphosate toxicity mechanisms [29] Case reports indicated that exposure to glyphosate was related to Parkinsonism [19,30].

Copyright: © 2014 Krüger M, et al. This is an open-access article distributed under the terms of the Creative Commons Attribution License, which permits unrestricted use, distribution, and reproduction in any medium, provided the original author and source are credited.