Copyright: ©2015 Purba MK, et al. This is an open-access article distributed under the terms of the Creative Commons Attribution License, which permits unrestricted use, distribution, and reproduction in any medium, provided the original author and source are credited

Results: The colour change and Rf values of the test samples were analysed and it was observed that 46% of food products tested were adulterated with metanil yellow whereas adulteration with malachite green was about 44% of the tested samples.

Conclusion: The used methods of detection can be used in the area of food quality control to detect such harmful and banned colors in edibles without massive instrumentation.

Food colors are added to edibles to make them look more attractive and tempting [1]. Food colours are pigments, dyes or any other compound which when added to any food article imparts color. When a non-permitted or non-food substance is added to increase the quantity and quality of the substance then it is termed under adulteration [2]. It leads to loss of real quality of the product. Food colours are divided into two categories, permitted food colors and non-permitted food colors [1,3].

There are several reasons due to which colours or dyes are added to foods such as identification of various products, preserve the attractive and colourful appearance and make it look more tempting, these colors are differentiated into 3 categories i.e. straights colors, lakes and mixtures [4,5]. Straight colors are used without being mixed with any other substance whereas as when straight colors are mixed with other chemicals then they are termed as lakes. Mixtures are formed by mixing one or more colorants with each other [4-6].

Naturally occurring colors such as colors extracted from vegetables and animals are classified under colors which do not need certification [4,7,8]. A survey conducted in all the four zones of India, according to which East zone showed maximum adulteration (80.3%). 72.3% of samples had permitted colours exceeding the prescribed value and 28.7% samples contained non-permitted colours [9].

Milk based sweets, savories and cereal based sweets used in India were analysed and its harmful effects among children were discussed. About 83% of products contained permitted colours and about 58% were used above their permitted limit. Use of non-permitted colours was analysed in about 17% samples and Rhodamine B was maximum used. Orange II and Metanil yellow were also among the non-permitted colours used; intake of Sunset Yellow FCF saturated the acceptable daily intake limit to a maximum of 47.8% in children, which is a cause of concern. Tartrazine, a lemon yellow color, was the most common permitted color and 36% of food products in India had exceeding amount of this color [10].

A study in 2013 determined red synthetic dyes in traditional sweets commercially sold at traditional open Easters market using high performance liquid chromatography. Four red synthetic dyes: azorubine, amaranth, cochineal red, and Allura red were determined, it was observed that the most commonly used dye in traditional sweets was cochineal red – it occurred in 17 samples. Allura red was used only in one sample, whereas no sample contained azorubine. Six samples of sweets contained two kinds of red dyes. The maximum usage level of synthetic dye exceeded only in one product [11].

All the samples procured were preserved in clean paper and plastic polybags and were kept in clean environment. Standard of metanil yellow (0.1 gms) and malachite green (0.1 gms) were dissolved in propanol (1 ml) at the time of analysis. Turmeric (0.14 gms), turmeric stem flakes (0.14 gms) and jelly samples (0.8 gms) were mixed and shaken with 1-2 ml of propanol for 5-10 mins to dissolve food color if present in the sample and then were used for analysis. Namkeen (0.8 gms) and green peas (2-3 seeds) samples were mixed with 1-2 ml propanol and were kept overnight to dissolve food color if present in them. This extracted sample was further used for preliminary color test and thin layer chromatography.

About 0.1 gm of standard sample of metanil yellow was taken in test tube and then about 1 ml of propanol was added to dissolve the sample. 5-10 drops of HCL was added to the sample and then the color of the sample was observed. Presence of pink colouration indicates presence of metanil yellow as shown in Figure 1. The same procedure was followed for procured food samples of turmeric and namkeen samples [12]. About 0.1 gm of standard sample of malachite green was taken in a test tube and then about 1 ml of propanol was added to dissolve the sample. 2 ml of freshly prepared neutral sulphite solution. (5 mg of Sodium metabisulphite dissolved in 10 ml of water) was added to the test tube. Disappearance of green coloration indicates presence of malachite green as shown in Figures 2-8. The same procedure was followed for collected food samples of jelly and green peas samples for presence of adulteration. Results according to the color test are tabulated in Table 1 [12]. 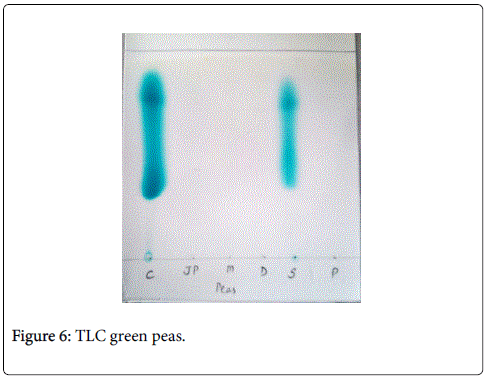 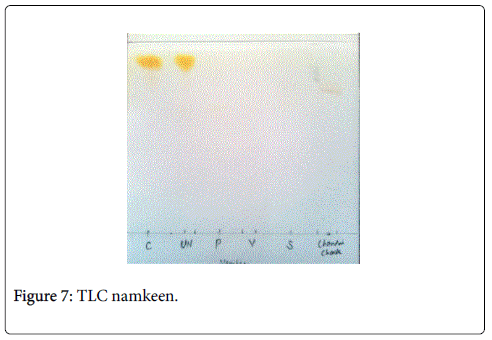 For thin layer chromatography, tanks containing solvents were prepared according to ascending chromatography in which solvents were kept in the bottom of the tank. The tank was washed thoroughly and then the solvents Ethyl acetate: methanol: ammonia: water (35: 11: 5: 5) were poured in the tank for metanil yellow in turmeric and namkeen and in other tank carbon tetrachloride: methanol (4:1) were added for detection of malachite green in peas and jelly in their respective samples [12].

After preparation of the tank, it was kept for saturation for about 30 mins. The silica TLC sheet was spotted using capillary tubes; separate capillary tube was used for each sample. The spotted plate was placed inside the tank, the tank was covered and the plate was run up to 8 cm as shown in Figures 9-13. Rf value (distance travelled by sample in relation to the distance travelled by solvent) was measured. It should be considered that environmental conditions such as, air flow, atmosphere pressure and freshness of the eluents temperature influence the distance travelled by the colorants. Results according to the Rf value are tabulated in Table 2 [12,13]. 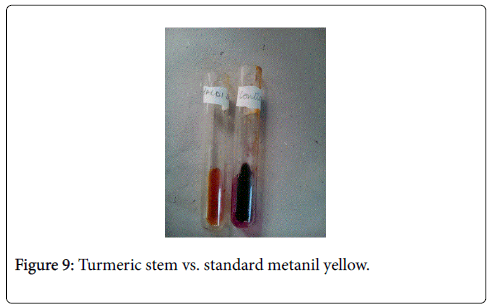 Food adulteration is a matter of concern these days. The forensic interest in the use of food colours is related to health rights and safeguard of the consumer. The regulations related to food dyes consider the health of human beings and the adulteration of foodstuffs and economic needs. This study is focused on detection of non-permitted food colors, metanil yellow and malachite green in selected food samples. The used methods of detection can be used in the area of food quality control to detect and quantify such harmful and banned colors in edibles. It could be concluded that the methods used can be used for detection of metanil yellow and malachite without any massive instrumentation. Efficient analytical methods are required for evaluating toxicity and authenticity or adulteration, in order to determine whether there are synthetic dyes present in foods and whether they are permitted, to determine the levels, to confirm the absence of added dyes in foods and to check on the stability of dyes during processing and storage. Level of adulteration in edibles is still high and further researches can be conducted to detect various non-permitted colors in other food products so that some effective measures can be undertaken for improving the food quality of the products.