Copyright: © 2016 Ogola PE, et al. This is an open-access article distributed under the terms of the Creative Commons Attribution License, which permits unrestricted use, distribution, and reproduction in any medium, provided the original author and source are credited.

A survey taken by the world health organization (WHO) and the international commission on radiation protection (ICRP) shows that certain materials used for the construction of such buildings (rocks soils) are known to be radioactive. Exposure to indoor ionizing radiation like exposure to any other type of ionizing radiation results in critical health challenges. This work set out to determine the levels of background ionizing radiations in selected buildings around Nairobi County and its environs. The Radiation Alert R (Digilert 200) meters were used to capture the readings. The meters were held about 1 m above ground level and readings were recorded in mR/h for all buildings. Numerical data was subjected to analysis of variance using Minitab version 17.0 to determine the statistical differences of exposure levels within various areas. A total of 400 buildings were sampled. The annual indoor readings were highest in Eastleigh (4.070 mSv) and relatively lowest in Nairobi Central Business District (CBD) at 2.763 mSv, representing a deviation from WHO recommended standard of 307.0% and 176.3%, respectively. None of the buildings sampled had exposure levels below the WHO recommended standard of 1 mSv. Overall, these results indicate presence of higher levels of ionizing radiations in buildings beyond the acceptable annual threshold thereby posing significant health risk to the public. Consequently, these results could find great application in guiding the formulation of the national building code to include routine surveillance of the background ionizing radiation levels in various buildings to assess the health risk of general public as well as exploring appropriate mitigation approaches.

Radiation has been found to be beneficial on one hand and harmful on the other hand and is encountered in everyday activities in various forms and different intensities. Some of the harmful effects are: cancer, cataract, gene mutation destruction of bones and blood cells and it can cause the death of an individual [1]. These radiations come from three main sources namely: cosmic radiation, terrestrial radiation and radioactivity in the human body [2]. In Kenya, indoor background ionizing radiation has received no attention, even though studies have established the presence of dangerous background ionizing radiation within buildings. Indoor background ionizing radiation investigation is important because some of the materials used in the construction of buildings are known to be radioactive [3]. It has been established that chronic exposure to even low dose rate of nuclear radiations from an irradiated building has the potential to induce cytogenetic damage in human beings [4]. Of particular concern is that such background ionizing radiations occur naturally from the sun, in rocks and soil and can cause changes in human cell including genetic mutation thus leading to cancer. Majority of the buildings in Kenya are usually constructed using stones and sand mined from underground rocks and river beds yet they have not been adequately radio-profiled to determine the levels of embedded radio-nuclides capable of emitting ionizing radiations. Conventionally, the World Health Organization (WHO) recommends that the annual exposure to the ionizing radiation to the general public should not exceed 1 mSv.

The study area involved various estate located around Nairobi County (Figure 1). Nairobi was selected because it is the capital city of Kenya and is surrounded by several expanding suburbs. The city is governed by the County Government of Nairobi. The city lies on the Nairobi River in the southern part of country, and has an elevation of 1,795 metres (5,889 ft) above sea level. Nairobi is the 14th-largest city in Africa, including the population of its suburbs. Nairobi County was founded in 2013 on the same boundaries as Nairobi Province. According to 2009 census, the city of Nairobi (1°17′S 36°49′E) has an estimated population of about 3.13 million people. In addition, Nairobi’s industrial activities have been acknowledged as the basis of modern development due to their important contribution to the economic growth and wellbeing of its inhabitants and general citizenry. Nairobi was divided randomly into eight sampling estates. These estates included Kasarani, Buruburu, Kahawa, Kinoo, CBD, Mlolongo, Eastleigh and Ruaka. The indoor radiation levels of 400 units were measured. The measurements were captured with the radiation meter held away from sampled surfaces in all the areas. In every premise/unit, eight indoor measurements were recorded. A total of four readings were recorded for each unit. Global Positioning System (GPS) was used to measure the precise location of sampling. Analysis of spatial distribution of data was performed using ArcGIS software version 10.

Determination of Radiation Levels in Premises

Measurements of indoor radiation were taken in eight different points per premise and the same procedure repeated in other premises. The readings were captured in milli Roentgew per hour (mR/h). At each point, samples of four measurements were taken and the mean value calculated.

The readings were then recorded in a work sheet and entered in Microsoft excel spreadsheet for analysis. UNSCEAR in 1988 recommends an indoor occupancy factor of 0.8. The occupancy

factor (OF) represents the proportion of the total time during which an individual is exposed to radiation field. The readings were converted from hours to years under the assumption that humans live in their premises for 24h a day. When converting the indoor readings to annual equivalent doses in mSv/y for the premises, the following equation was used.

E1 is the annual equivalent dose rate in mSv/y.

X is the indoor meter reading in mR/h.

8760 is the annual conversion factor in hours/year.

0.8 is the indoor occupancy factor

1.7 is the calibration factor.

The data was subjected to descriptive statistics and were expressed as Means ± SEM. One way ANOVA was used to test the significance within the premise clusters at 95% confidence level. The data was further subjected to Turkey’s post hoc for pairwise comparison and separation of means. Minitab version 17.0 was used to determine the significant relationships between the radiations from different premises. The findings were presented through tables that showed levels of mean radiation levels between the various premises and their differences in statistical significance. The results were further computed relative to the recommended WHO annual dose reference of 1 mSv. The percentage deviations were calculated by getting the percentage of the difference of the annual reading from the WHO standard. The results were presented in tables and spatial distribution of data was presented in maps. Figure 2: Distribution of indoor ionizing radiation data from 8 different estates in Nairobi County and its environs. Table 1: Number of premises (%) and percentage annual deviation from WHO recommended exposure standard of ionizing radiation in selected estates around Nairobi County. 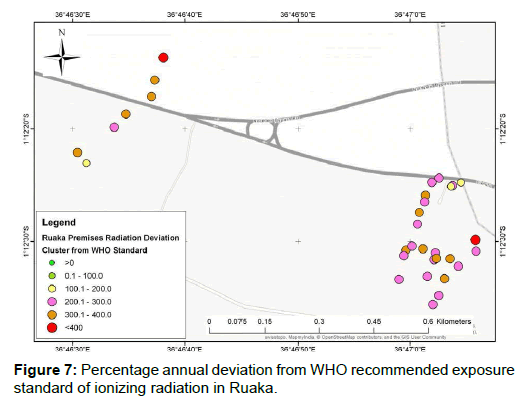 A summary of the percentage annual deviation from WHO recommended standard of ionizing radiation in Nairobi County and its environs showed that majority of the premises (36%) were in the deviation cluster of 201%-300% while 2% were in 1%-100% deviation cluster (Table 2). None of the premises sampled had their deviation cluster below the acceptable threshold. In addition, 5% of the premises had their annual deviations above 400%, 24% were in the cluster of 301%-400% and 33% were between 101%-200% (Table 2). From the annual exposure to ionizing radiation in premises around Nairobi County and its environs it was observed that Ruaka, Kinoo and Eastleigh showed ionizing radiation levels that were not significantly different from each other (p>0.05;Table 3). In addition, Kahawa and Buruburu were not significantly different from each other, (p>0.05) while Kasarani, Mlolongo and CBD had ionizing radiation levels that were significantly different from each other (p<0.05). Eastleigh had the largest deviation from WHO with 307% while CBD had the lowest deviation with 176.3% (Table 3).

Table 2: Percentage annual deviation from WHO recommended standard of ionizing radiation in Nairobi County and its environs.

Table 3: Annual exposure to ionizing radiation in premises around Nairobi County and its environs.

None of the premises sampled had their annual indoor ionizing radiation below the safe levels.This means that majority of the occupants of the premises are exposed to relatively to high doses of radiation. This may not have an immediate health impact but in the long term, cumulative dose can become hazardous. From this study, it is recommended that regular and periodic monitoring of the background ionizing radiation level should be carried out in various buildings to assess the health risk of the general public and also ensure that areas of potential risks are identified early enough and the risk mitigated. Additionally, public awareness on the risks and dangers of long term of exposure to background ionizing radiations to the general public should be conducted. Consequently, the results for the study can be used as a guide in formulation of the national building code to include radiation surveillance during construction.