Copyright: © 2015 Gupta A, et al. This is an open-access article distributed under the terms of the Creative Commons Attribution License, which permits unrestricted use, distribution, and reproduction in any medium, provided the original author and source are credited.

Background: Quercetin was determined in bioactive fractions of Ocimum gratissimum, Butea monosperma, Bauhinia variegate and polyherbal hepatoprotective formulation by HPTLC method. Methods: Polyherbal hepatoprotective formulation was developed by using five bioactive fractionated extracts of three plants namely Butea monosperma, Bauhinia variegate and O. gratissimum. All three plants contain quercetin. Chromatographic separation was performed on aluminium foil plates coated with 200 μm silica gel 60F254 Linear ascending development with toluene:ethyl acetate:formic acid, 5:4:0.1 (v/v/v) was performed at room temperature (25 ± 2°C) in a twin-trough glass chamber saturated with mobile phase vapor. Compact bands (Rf=0.38) were obtained for quercetin. Spectro densitometric scanning was performed in fluorescence mode at 380 nm. The method was validated for precision, recovery, specificity, detection and quantification limits. Results: Linear regression analysis of the calibration plots showed a good linear relationship (R²=0.9843 ± 0.0001) between peak area and concentration in the range 0.5-2.5 μg/band, respectively. The limits of detection and quantification were 0.089 and 0.26 μ/band. The recovery of the method was 97.33-99.11%. Conclusion: The above method was a rapid and cost effective quality-control tool for routine analysis of quercetin in herbal extracts and in pharmaceutical dosage form.

Nature still obliges as the man’s primary source for the cure of his ailments. Research in preventive medicine showed the importance of functional nutrition in reducing the risk factor of certain chronic diseases. Innate defense system of the human body may be insufficient for the damage caused by continued oxidative stress [1]. Quercetin and other flavonoids, have the structure to act as powerful antioxidants, and have often proven so in vitro. Quercetin, being a major constituent of the flavonoid intake, could be a key in fighting several chronic degenerative diseases [2]. Growing scientific evidence has shown adverse side effects, like liver damage and mutagenesis, of synthetic antioxidant [3]. Therefore, recently there has been an upsurge of interest in natural products as antioxidants, as they inhibit the free radical reactions and protect human body from various diseases, such as cancer and diabetes. Recent studies showed that a number of plant products including polyphenolic substances (e.g., gallocatechins, delphinidin, cyanidin, gallic acid, ellagic acid, pelargonidin and sitosterol) and various plants or herbal extracts exert potent antioxidant actions, which are very well known for their healing powers [4].

Stem bark powder is used to apply on injury caused due to axe. Stem juice is applied on goitre of human being. Paste of stem bark is applied in case of body swellings. Bark is acrid, bitter, appetizer, aphrodisiac and laxative, anthelmintic, useful in fractures of the bones, diseases of theanus, dysentery, piles, hydrocele, cures ulcers and tumors. Bark is useful in biliousness, dysmenorrhea, liver disorder, gonorrhea and it also purifies the blood. The ash of young branch is prescribed in combination with other drugs in case of scorpion sting [5].

A limited number of study have been used for the determination of quercetin in Butea monosperma bark [24] and Ocimum gratissimum leaf and Bauhinia vareigata bark [25]. The quercetin concentrations were also determined by UV spectropho-tometry [26], liquid chromatography coupled with different types of detectors [27-31]. Even though these analytical procedures are suitable for the detection of quercetin in samples originating from plants, they have limitations with respect to their applications in the determination of quercetin in plant samples. The reported colorimetric method lacks sensitivity and is tedious and time-consuming. Even though high performance liquid chromatography (HPLC) is a method of choice, it is limited by extensive sample clean-up and requires expensive solvents and longer periods of column stabilization. In comparison to HPLC, HPTLC is a versatile analytical technique that requires less expensive instrumentation and expertise. The present study was carried out to develop a rapid, sensitive and accurate analytical method for estimation of quercetin in bioactive fractions of plant extracts and its pharmaceutical dosage form (hepatoprotective tablet formulation) for the routine analysis of a large number of plant extract samples and their formulations.

Polyherbal hepatoprotective tablet was prepared by using fractions obtained from alcoholic extracts of Butea monosperma, Bauhinia variegata stem bark and O. gratissimum leaves (Figure 1). All these ingredients were collected from Maliba Pharmacy College campus and were authenticated by Prof. Minoo H. Parabia, Department of Bioscience, Veer Narmad South Gujarat University, Surat. Voucher specimen (No: MPC/13032010/01, 02 and 03) has been deposited in the Department of Bioscience.

The dried and powdered material of each plant (500 g) was extracted with methanol at room temperature for three weeks with shaking and stirring. Combined methanolic extracts were evaporated to dryness under reduced pressure below 40°C and then dissolved in distilled water and subjected to solvent-solvent fractionation.

Bauhinia variegate L.: Methanolic extract was fractionated with hexane, ethyl acetate (EtOAc) and n-butanol (n-ButOH) in the order of their increasing polarity to obtain respective fractions [18].

Ocimum gratissimum L.: Alcoholic extract was fractionated with hexane, dichloromethane (DCM) and ethyl acetate (EtOAc) in the order of their increasing polarity to obtain respective fractions [33].

Establishment of qualitative and quantitative phytoprofile of fractionated extracts

Determination of total phenols: Each sample was mixed with 1 mL Folin-Ciocalteu reagent and 0.8 mL of 7.5% Na2CO3. The resultant mixture of was measured at 765 nm after 2 hr at room temperature. The mean of three readings was used and the total phenolic content was expressed in milligram of gallic acid equivalents/1 g extract. The coefficient of determination was found to be r2=0.992 [36]

Determination of total flavonoids: Standard quercetin was used to make the calibration curve [0.04, 0.02, 0.0025 and 0.00125 mg/mL in 80% ethanol (v/v)]. The standard solutions and test samples (0.5 mL) of each fraction was mixed with 1.5 mL of 95% ethanol (v/v), 0.1 mL of 10% aluminum chloride (w/v), 0.1 mL of 1 mol/L sodium acetate and 2.8 mL water. The volume of 10% aluminum chloride was substituted by the same volume of distilled water in blank. After incubation at room temperature for 30 min, the absorbance of the reaction mixture of each sample and standard solution were measured at 415 nm. The mean of three readings was used and the total flavonoid content was expressed in milligram of quercetin equivalents/1 g extract. The coefficient of determination was r2=0.99020 [37].

Samples preparation from each plant extracts fractions: Accurately weighed 100 mg of each, acetone fraction of Butea monosperma, ethyl acetate and n-butanol fractions of Bauhinia variegata and dichloromethane and ethyl acetate fractions of Ocimum gratissimum was transferred to separate 10 mL volumetric flask and dissolved in 10 mL of methanol. These solutions were sonicated for 10 minutes and filtered through Whatman No. 1 filter paper to get solution containing 10 mg/mL each.

Sample preparation from polyherbal tablet: Polyherbal tablets equivalent to about 100 mg of mixture of fractionated extracts of Butea monosperma, Bauhinia variegata and Ocimum gratissimum was weighed and transferred to 10 mL volumetric flask containing 10 mL methanol to get solution containing 10 mg/mL. The resulting solution was centrifuged at 3000 rpm for 5 min and supernatant was analyzed for quercetin content [38].

HPTLC was performed on 15 cm × 10 cm aluminum backed plates coated with silica gel 60F254 (Merck, Mumbai, India). Standard solution of quercetin and sample solution were applied to the plates as bands 6.0 mm wide, 9.2 mm apart, and 15.0 mm from the bottomedge of the same chromatographic plate by use of a Camag (Muttenz, Switzerland) Linomat V sample applicator equipped with a 100 μL Hamilton (USA) syringe. Ascending development to a distance of 80 mm was performed at room temperature (28 ± 2°C), with toluene: ethyl acetate: formic acid, 5:4:0.2 (v/v/v), as mobile phase, in a Camag glass twin-trough chamber previously saturated with mobile phase vapour for 20 min. After development, the plates were dried with a hair dryer and then scanned at 380 nm with a Camag TLC Scanner with WINCAT software, using the deuterium lamp. The method was validated according to the ICH guidelines [11].

Different volumes of stock solution (500 μg/mL) were spotted on the TLC plate to obtain concentration 0.5, 1.0, 1.5, 2.0 and 2.5 μg /spot of quercetin, respectively. The data of peak areas plotted against the corresponding concentration.

The proposed method was validated as per ICH guidelines [39]. Samples were prepared as per the earlier adopted procedure given in the experiment.

Linearity is expressed in terms of correlation coefficient of linear regression analysis. The linearity response was determined by analyzing 5 independent levels of calibration curve in the range of 0.5, 1.0, 1.5, 2.0 and 2.5 μg /spot of quercetin respectively. The calibration curve of absorbance vs. concentration was plotted and correlation coefficient and regression line equations were determined.

Result of precision should be expressed as relative standard deviation (% R.S.D) or coefficient of variance (% C.V.).

Standard solutions were applied by Linomat 5 automatic sample applicator. Sample was spotted seven times for repeatability studies. The peak area obtained with each solution was measured and % C.V. was calculated.

Mixed solution containing (1.0-2.0 μg/spot) of quercetin was analyzed three times on the same day and % C.V. was calculated.

Mixed solution containing (1.0-2.0 μg/spot) of quercetin was analyzed on three different days and % C.V. was calculated.

It was determined by calculating the recovery of quercetin by standard addition method.

The accuracy of the method was established by performing recovery experiments at three different levels using the standard addition method. In 1 μl (1 μg/mL) of samples, known amounts of quercetin (0.5, 1.0 and 1.5 μg/spot) standard were added by spiking. The values of percent recovery and average value of percent recovery for quercetin were calculated.

Limits of detection and limit of quantization

SD=Standard deviation of the Y- intercepts of the 5 calibration curves.

Slope=Mean slope of the 5 calibration curves

The specificity of the method was ascertained by analyzing the standard drug and extract. The spot for quercetin in the sample was confirmed by comparing the Rf values and spectra of the spot with that of the standard. The peak purity of the quercetin was assessed by comparing the spectra at three different levels, viz. peak start, and peak apex and peak end positions of the spot.

Various ratios of solvents were tried as a mobile phase and optimum mobile phase was selected was toluene:ethyl acetate:formic acid, (5:4:0.1 v/v/v). This mobile phase allowed good resolution, dense, compact and well-separated spots at Rf value 0.38. Wavelength 380 nm was used for quantification of the drug. Since there is only one peak seen, is shown in Figure 3. 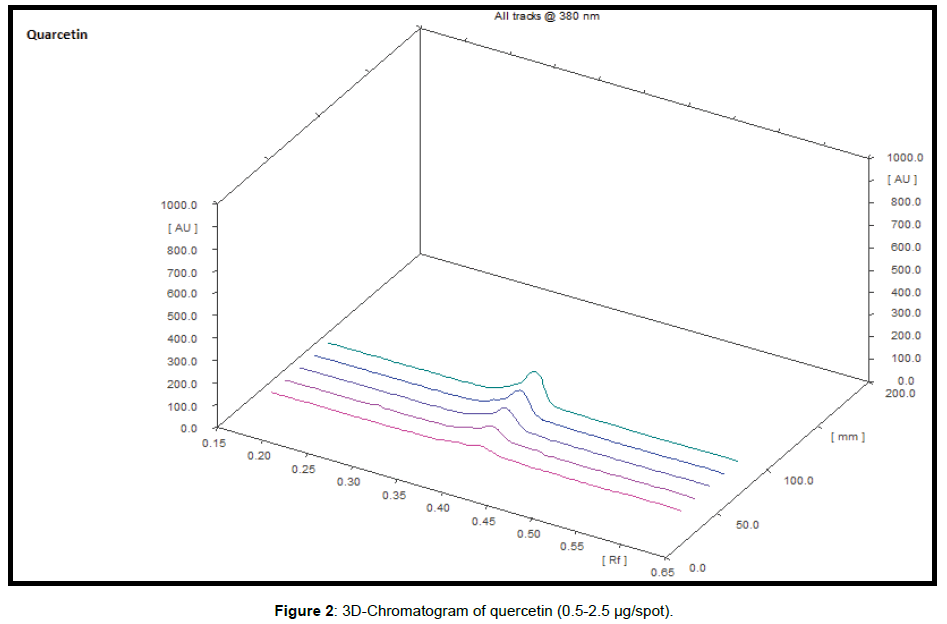 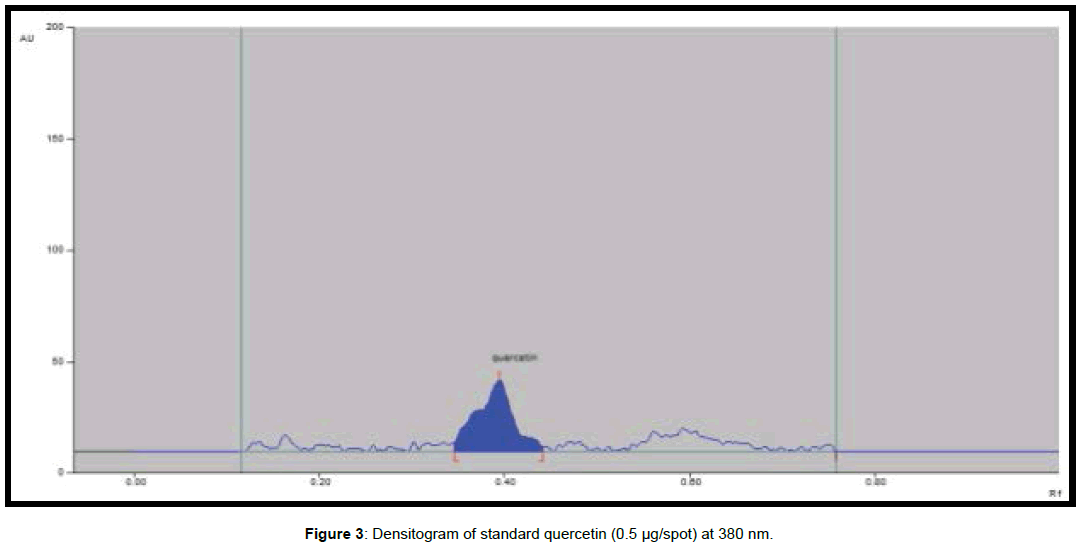 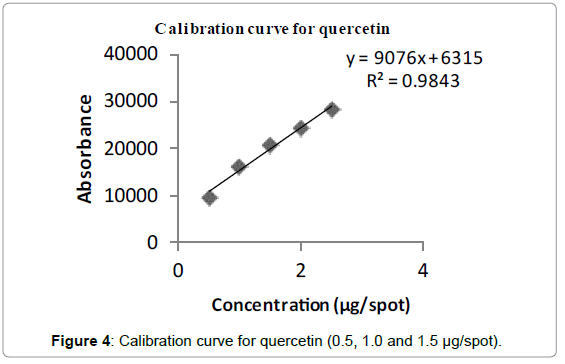 Accuracy: Accuracy of the method was confirmed by recovery at three level of standard addition. Percentage recovery for quercetin was found to be in range of 97.33%-99.11%. The results are shown in (Table 4).

The peak purity was assessed by comparing the spectra at peak start, peak apex and peak end positions of the spot. Good correlation (R2=0.9843) was obtained between the standard and the samples in the range of 0.5-2.5 μg/spot.

The identification of quercetin was done on the basis of Rf values. The concentrations of quercetin in acetone fraction of B. monosperma, ethyl acetate and n-butanol fractions of B. variegata, dichloromethane and ethyl acetate fractions of O. gratissimum were found to be 0.395, 0.174 4, 0.1382, 0.3229, 0.6734 (mg/10 mg) respectively. The results are shown in (Table 6). Acetone fraction of Butea monosperma showed eight peaks; the fourth peak Rf value (0.39) was coinciding with standard Rf value (Figure 5). The concentration of quercetin was found to be 0.395 (μg/10 mg). 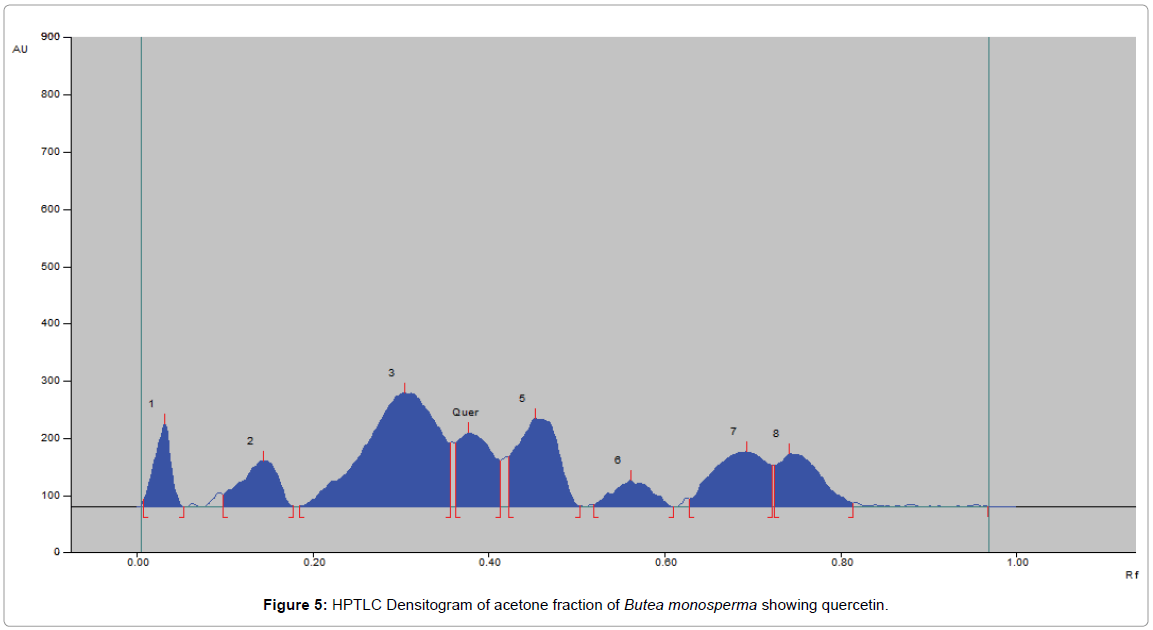 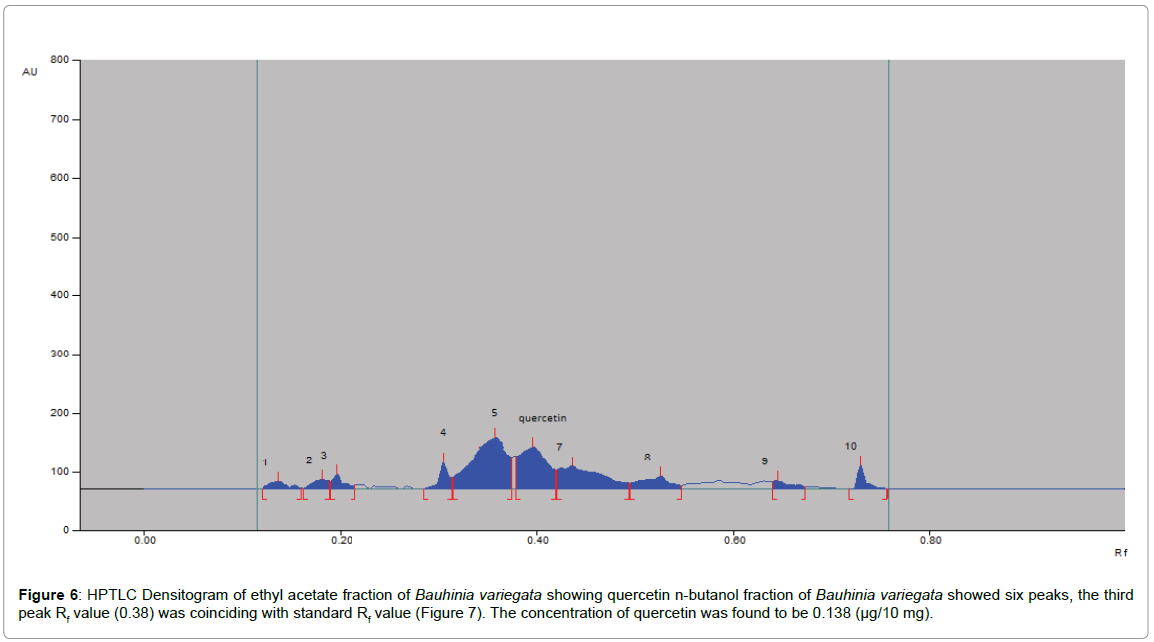 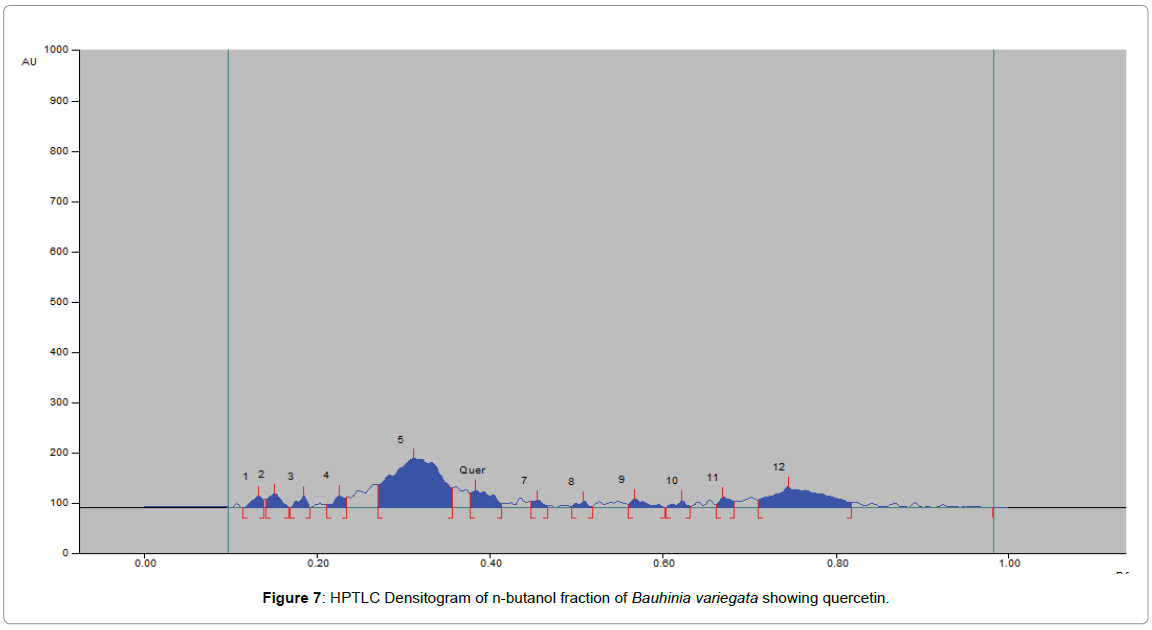 The detailed summary of validation parameters is described in (Table 7)

All authors have none to declare.