+44-1467840001
Determination of the Antibiotic Properties of Cannabidiol | OMICS International

Determination of the Antibiotic Properties of Cannabidiol

Copyright: © 2016 Duarte P. This is an open-access article distributed under the terms of the Creative Commons Attribution License, which permits unrestricted use, distribution, and reproduction in any medium, provided the original author and source are credited.

Marijuana has been used for centuries as therapy for very diverse health issues which displayed various pathologies, from anorexia to cancer including almost all kinds of inflammatory diseases. However, the use of cannabis as therapy generates much controversy as there is conclusive evidence of its beneficial properties. Also it entails unwanted effects due to psychoactive power of some of its main components. Hence, this ongoing work focuses on finding ways to administer cannabinoids, specifically, cannabidiol (CBD), without the presence of any of the psychoactive compounds. Extensive study in this field could be used amicably and we may also find ways to evaluate the effectiveness of this kind of treatment.

Multiple benefits are attributed to cannabinoids, particularly to cannabidiol (CBD). These benefits include anti-inflammatory action, [1] application in treatment of cachexia, emesis and pain [2,3], antiglaucoma properties [4,5] and in some cases, antiseptic [6] property.

Many of these properties are found in experimental data, but the antimicrobial action is not established and supported by clinical trials. The purpose of this report precisely provide evidences through a controlled and documented experiment that leads us to accept, deny or design more studies about this potential application of CBD.

In this experiment, two sets of bacterial species were grown in two agar sets, one with known amounts of CBD and the other as a control. In the first part of the result section, output obtained from the used extracts of CBD in absence of THC (Tetrahydrocannabinol) and the analysis of the concentration are described.

UV-visible spectrophotometry [7] is one of the most frequently employed techniques in pharmaceutical analysis. It involves measuring the amount of ultraviolet or visible radiation absorbed by a substance in solution. This particular instrument measures the ratio or function of ratio obtained from the intensity of two beams of light within the UV-visible region.

When beam of light is passed through a transparent cell containing a solution of an absorbing substance, reduction of the intensity of light may occur.

where, A =absorbance or optical density; a =absorptivity or extinction coefficient; b =path length of radiation through sample (cm) and c =concentration of solute in solution.

Both b and a are constant so a is directly proportional to the concentration c .

Quantification of medicinal substance using spectrophotometer may be carried out by preparing solution in transparent solvent and measuring its absorbance at suitable wavelength. The wavelength of maximum absorption (λmax) is normally selected, where small error in setting the wavelength scale has little effect on measured absorbance.

Ideally, concentration should be adjusted to receive an absorbance of approximately 0.9, around which the accuracy and precision of the measurements remains optimal. The assay of single component sample, which contains other absorbing substances, is calculated from the measured absorbance by using one of three principal procedures.

They are, use of standard absorptivity value, calibration graph and single or double point standardization.

In standard absorptive value method, the use of standard A (1%, 1 cm) or E values are used in order to determine its absorptivity.

The objective was to get a pure extract of CBD which contains other cannabinoids shown in the Table 1 and many others in a negligible proportion with comparison to the presence of CBD.

The extraction process is simple and here author has discussed only the determination of the concentration of CBD in summary. It is a regular tincture of cannabis, which is typically made by soaking the dried flowers of the female hemp plant (marijuana) in ethanol and evaporating the solvent. In this case, prior to soaking, heating of the sample up to 157°C was done, so that THC should be evaporated.

For this determination, a standard of cannabidiol of Sigma house with a concentration of 0.99 mg/ml and a standard of THC of Cayman Chemical house with purity over 98% is used. Spectrophotometer is used for analyzing the readings. CBD has its maximum absorbance at a wavelength of 273.8 nm. Methanol is used as solvent and the CBD concentration in our sample is calculated with the standard (Figures 1 and 2). 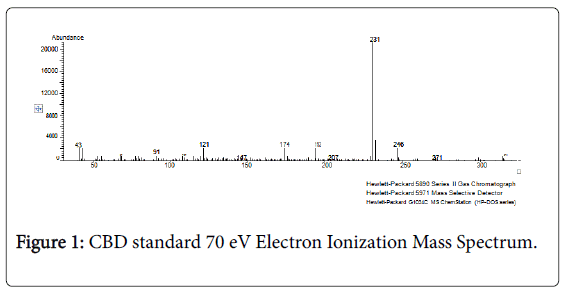 The steps followed in this experiment are as follows:

Dilution of the standard cannabidiol was done up to 1/10th grade.

Five different tubes were prepared with various combinations such as:

• Sample solution with 1 ml of methanol.

Reading of all the solutions were taken at 273.8 nm for the solution prepared according to a, b and c procedure.

Applying the standard formula, i.e., Absp/[p]=Absst/[st], necessary calculations were done and the dilution factor was taken into account.

Reading of the solution tubes of 4th and 5th type were taken at 346 nm (THC maximum absorbance) to check the sample is free of it or not.

CBD agar: In order to test the antibiotic properties of the CBD, we added 10 mg and 50 mg of compound to nutrient agar, considering the concentration calculated in our sample and taking into account the molecular weight of CBD (314.46) as follows:

Starting from the usual preparation of nutrient agar, in which 31 g of lyophilized is needed to prepare 1 l of agar; we required 4.65 g to prepare 150 ml.

A watch glass is put on the weight and tarred. Then 4.65 g of freezedried nutrient agar is weighed and lyophilized, distilled water is also poured into the vessel for more accurate preparation. 50 ml of distilled water is added and stirred during this process.

Required volume of extract is then added so that the preparation has 10 mg of CBD (simultaneously using the same steps adding at this point the necessary volume to get 50 mg of CBD) [Agar A1 and A2].

Steps 1-4 are followed repetitively as per the requirement and the same volume of ethanol extract is added instead of extract itself [Agar B1 and B2] in the next stage.

Another set was prepared using Steps 1-4 again followed by exempting other steps [Agar C]. Next, the contents of the beaker are transferred to an Erlenmeyer flask and filled with distilled water to make up the volume to 150 ml. The flask is heated on a tripod. Heating is done until boiling and after a minute’s cooling the solution is plugged with cotton. All the flasks with respective samples are labeled accordingly depending on the type of agar prepared. Autoclaving of the same are done for 45 min and the agar solutions are spread on Petri plates according to their earlier labeling. Escherichia coli and Staphylococcus aureus are used in this experiment. It is kept under observation and after 24 h and 48 h of incubation at 37°C observation is recorded. Difference in the normal growth of the bacterium for the control and the seeded agar of CBD is noted down.

According to the hypothesis of this study, lower bacteria growth is expected in the second case, considering the difference in the presence of 10 mg or 50 mg of CBD. As the CBD extract is made in alcohol and it has antimicrobial properties, we must sow plates with the same amount of alcohol. This is necessary to ascertain that the prospective lower growth is due to the CBD and not due to the alcohol, although in theory this interference should be minimal.

The research work is still under process so proper conclusion has not yet derived. The researches which we have done until now reveals that cannabidiol (CBD), without the presence of any of the psychoactive compounds can be used and it proved to be effective for treating inflammatory diseases.