A geochemical and isotopic techniques were undertaken to characterize groundwater in Northeast Tunisia. Hydrogeochemical investigations demonstrated that groundwater can be classified into different water facies. The Ras Djebel-RafRaf aquifer showed a (Ca-Cl-SO4) and (Na-Cl-NO3) water type. Data inferred from 18O and deuterium isotopes in groundwater samples indicated recharge with modern rainfall. Water characterized by lower δ18O and δ2H values is interpreted as recharged by non-evaporated rainfall originating from Mediterranean air masses from Mediterranean air masses at higher altitude. However, water with relatively enriched δ18O and δ2H contents is thought to reflect the occurrence of an evaporation process related to the long-term practice of flood irrigation.

The region of Bizerte (Figure 1) is situated in boundary Northen of Tunisia. It forms with the Cap Blanc the most advanced point of Africa. It is exposed to humid winds from the northwest and West, and receives an average rainfall of 570 mm/year [1], This coastal occupies an area of 50 Km2. It is limited by Djebels bouchoucha, Touchela and Bab Banzart in NW, Djebels Ennadour and Demna in South, the Mediterranean Sea in the North and NE. This zone is influenced by a sub-humid Mediterranean climate. The annual temperature is around 18° C. The ETP, about 1197 mm/year. This basin is drained by many wadis. The use of water is essential since the Ras Djebel is an agricultural region by excellence, in Fact the major part of population practise agricultural activities.

In result, this aquifer undergoes increased anthropic pressure through overexploitation and construction of two dams at Wadi Beni Ata and Wadi Shaab Eddoud.

From a geologic standpoint, the main geologic features of this study area are [2,3].

(e) Quaternary, represented by the villafranchian, formed essentially by limestone.

Measurement of temperature, electrical conductivity and pH were measured in the field. Major elements (SO42-, Cl-, NO3-, Ca2+, Mg2+, Na+ and K+) were analysed at the laboratory of National Center for Nuclear Sciences and Technologies. These elements are expressed in mg/L-1. Salinity was analyzed by evaporating a specified volume of water sample in a graduated capsule for 24 h in an incubator at 105°C.

The dry residue concentration was determined by subtracting the final mass from the initial mass of the sample that was placed in the incubator. Ca2+ and Mg2+ were measured by Liquid Ion Chromatography while K+ and Na+ were measured by flame photometer.

The results of chemical analyses of the investigated groundwater samples are presented in Table 1.

Physical-chemical parameters: The overall chemical characteristics of groundwater are presented in Table 1. The pH values range from 6, 88 to 8, 3 with an average value of 7, 3. The temperature values are between 20, 2°C and 25°C. The values measured on the surface water are influenced by the surface air temperatures. The factor of correlation is in the order of 1.

Concentrations of sodium and chlorides vary respectively between 6, 9 to 1299, 5 mg/L and 42, 5 to 1742 mg/L. For both Na+ and Cl-, the highest concentration levels characterize the wells situated on the border of the sea (P13, P25 and P48). The spatial distribution of chloride and sodium concentrations illustrate a similar evolution to that salinity: they both increase in the direction of groundwater flow.

Ca2+ concentrations ranged between 50 and 542 mg/L. The most elevated value was measured in well P25, while lowest level was recorded in well P40. The water of this coastal aquifer is moderately rich in calcium. The mostly analyzed waters are pure, which is in conformity with pH values of these waters. Calcium and pH have an influence on water aggressiveness [4].

The sulphates concentrations of the water in the Ras Djebel- RafRaf aquifer varied between 53, 45 and 987, 69 mg/L. The highest concentrations were measured for well P25 and P13 while the lowest value is characterized by well P40.

NO3- concentrations varied between 7, 51 and 144, 4 mg/L. The highest concentration was measured for well P6 while the lowest value was characterized by well P41.

The examination of nitrate distribution map (Figure 3) reveals that high nitrate concentrations appear to be related to the fertilizer application and long term flood irrigation practises, highlighting the significant contribution of the return flow of irrigation waters to the degradation of groundwater [5-8]. Water saturation states for minerals as anhydrite (SI anh), gypsum (SI gyp), aragonite (arg) and calcite (cal) were computed. If the SI is < 0, dissolution is considered as the dominant process for the related mineral and when is >0, precipitation of mineral is likely to be occurring in the system [9].

The majority of samples are supersaturated towards aragonite from which the carbonates are precipitated. This supersaturation of water towards these carbonates minerals such as aragonite and calcite shows that the possibility of dissolution of these minerals by the waters is not possible and that cannot contribute to the acquisition of mineralization [10]. In addition, the majority of samples of this groundwater are under saturated towards gypsum.

The piper diagram [3] (Figure 4) was determined to precisely recognize the different groundwater facies. Nitrate concentration was taken into account when plotting this diagram because of its relative abundance in the groundwater. The data represented in this groundwater samples are classified into two major groups: (Ca-Cl-SO4) and (Na-Cl-NO3) water type.

Relationships between TDS and major elements

Plots of various major elements as a function of TDS value were drawn to determine the contributing elements to groundwater mineralization and the major hydrogeochemical process. Shows that Cl-, SO42- and Na+ are well correlated with TDS presenting very close values of 1 (respectively: 0, 88; 0, 67 and 0,87). In result chlorides, sulphates and sodium are the main contributors to groundwater mineralization.

However, the contents of calcium and bicarbonate participate significantly is not determining role in the acquisition of mineralization. In addition to TDS, the correlation matrix established between sulphates and Cl- ion (Figure 5A) shows that the majority of points are situated above the line (1:1). The increase of Cl- in comparison to sulphates proves that the Cl- has probably two origins: It is linked to a marine intrusion or dissolution of the halite. This hypothesis is confirmed by the relation between the Cl- and Na+ ions (Figure 5B). The relationship between Ca2+ and Cl- ions (Figure 5C) shows excess of Cl- against Ca2+, which demonstrates a process of precipitation of gypsum (CaSO4, 2H2O) or anhydrite (CaSO4). Besides, the effect of precipitation is felt in the relationship between the SO42- and Ca2+ ions (Figure 5D) where the sulphate deficiency is related to the ion exchange.

Isotope geochemistry techniques are valuable tools in investigating many problems in hydrology and evaluating hydrogeological and hydro chemical controlling mechanisms in any groundwater system [11,12].

Stable isotopes (δ18O, δ2H) have conservative proprieties and provide information on the groundwater recharge process (Table 2) [13]. They can offer an evaluation of physical process that affects water masses, such as evaporation and mixing [14]. 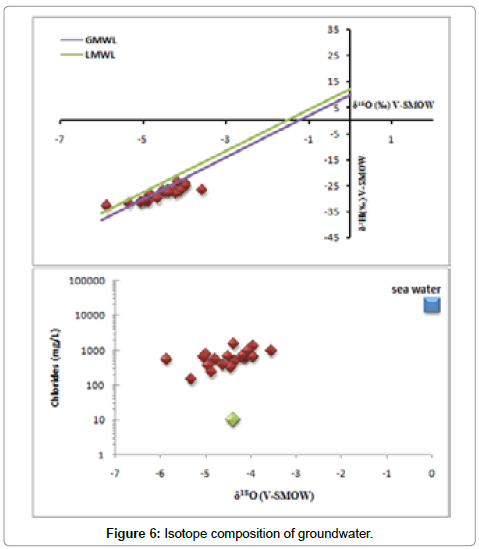 Nevertheless, these groundwater samples (Figure 6A) can be further divided into two groups:

• The first group, which is placed below the GMWL is probably the consequence of the infiltration of an evaporated component likely deriving from the return flow of irrigation water.

• The second group, placed between the GMWL and the LMWL, shows that the precipitation ensuring the recharge of aquifer from a mixture of oceanic and Mediterranean vapour masses.

The plot of chloride versus δ18O (Figure 6B) indicates the different processes responsible for the variation of groundwater salinity.

Some water samples show a correlation between these two elements. It is probable that the dissolution mechanism takes precedence over evaporation in the acquisition of the mineralization.

Based on hydrogeological characteristics the aquifer of Ras Djebel Northest Tunisia can be classified into two groups: Ca-Cl-SO4 and Na- Cl-NO3 water type. The acquisition of mineralization mainly through natural mineralization mechanisms such as the ion exchange and the geology of groundwater. Nevertheless, anthropogenic process related to agricultural practices also plays an important role in the salinization of groundwater.