+44-1647-403003
Diagnostic Value of Widal Test in the Diagnosis of Typhoid Fever: A Systematic Review | OMICS International

Diagnostic Value of Widal Test in the Diagnosis of Typhoid Fever: A Systematic Review

Copyright: © 2017 Mengist HM, et al. This is an open-access article distributed under the terms of the Creative Commons Attribution License, which permits unrestricted use, distribution, and reproduction in any medium, provided the original author and source are credited.

Introduction: Typhoid fever the common cause of morbidity and mortality especially in the developing countries where Widal test is routinely used as diagnostic tool to rule out the disease. The diagnostic ability of Widal test is debatable as the test method has a low sensitivity, specificity and positive predictive value (PPV). Therefore, reviewing articles across the world regarding the diagnostic value of Widal test is necessary.

Methods: Systematic review of published articles regarding the diagnostic value of Widal test to rule out typhoid fever was carried out. Published articles were identified from PubMed, Google scholar, HINARI and other sources. The mean, median, percentile and standard deviation of sensitivity, specificity, NPV and PPV of the reviewed articles were computed by SPSS software version 24.

Results: A total of 16 articles were included in the systematic review with the oldest publication in the year 1994 and the recent in 2015. The mean sensitivity, specificity, positive predictive value (PPV) and negative predictive value (NPV) of Widal test was 73.5%, 75.7%, 60% and 75.2%, respectively.

Conclusion: The systematic review results show that the reliability of Widal test is comparatively poor. Therefore, Widal test should not be used as a diagnostic tool to rule out typhoid fever unless supported by invasive clinical pictures and other confirmatory tests.

Typhoid fever is a systemic disease caused by Salmonella typhi and is the major cause of morbidity and mortality worldwide [1]. Reports by the World Health Organization revealed that about 21 million cases and >600,000 annual deaths from typhoid fever occur throughout the world. Developing nations share the highest burden due to rapid population growth, increased urbanization, and limited safe water and health systems [2,3].

Accurate diagnosis of typhoid fever at an early stage is important not only for etiological diagnosis, but also to identify individuals that may serve as potential carriers, who may be responsible for acute typhoid fever outbreaks. Additionally, the diagnosis of typhoid fever on clinical grounds is difficult, as the presenting symptoms are diverse and similar to those observed with other febrile illnesses. Serodiagnosis of typhoid fever has been attempted since the late nineteenth century by Widal and Secard. The test is based on demonstrating the presence of agglutinins (antibodies) in the serum of an infected patient, against the H (flagellar) and O (somatic) antigens of Salmonella enterica serotype typhi (S. typhi) [4-8].

Widal test relies on the demonstration of a rising titer of antibodies in paired samples 10 to 14 days apart. In typhoid fever, however, such a rise is not always demonstrable, even in blood culture-confirmed cases. In addition, interpreting the test has been such a problem that different cut-offs have been reported from different places which makes difficulty in patient management. Furthermore, the test has a low sensitivity, specificity and positive predictive value (PPV) [9-12] which may create over diagnosis of typhoid fever, patient dissatisfaction, inappropriate economic loss and drug resistance in particular.

A systematic review was made on observational studies which were reported on the diagnostic value of Widal test in diagnosing typhoid fever. Eligibility criteria for articles to be included in the review were articles presenting data on the sensitivity, specificity, PPV and NPV of Widal test compared to other tests independent of study design and without restriction of publication date. Reports of original studies and review articles written in English language were considered. Studies available only in abstract form, unpublished theses, dissertations and articles with sample size of less than 60 were also excluded (Figure 1). 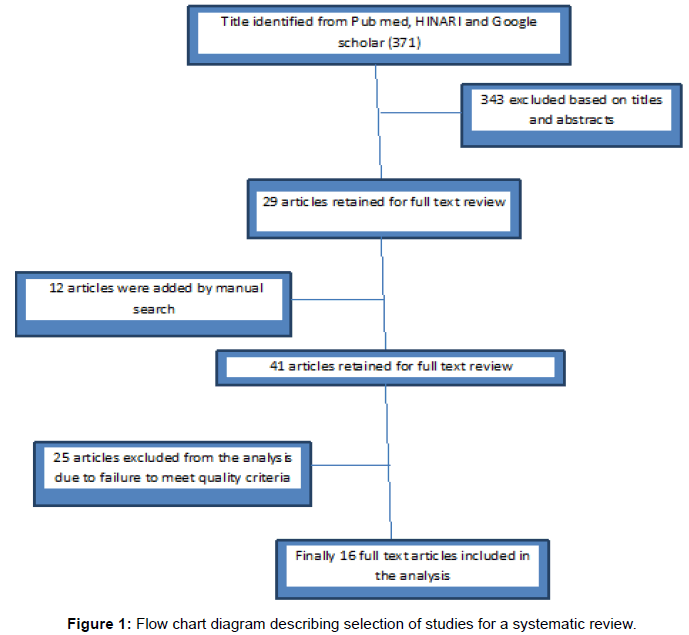 Using culture method as a gold standard, sample size and use of right statistical measurement to assess the diagnostic performance of Widal test were noted as quality of indicators. All assessments were entered into pre-formatted standardized data extraction forms. Studies were assessed for quality and studies fulfilling 75% of quality assessment parameters were included for analysis. High quality studies were: studies that reported outcomes on at least 50 samples, cross-sectional studies and surveillances whose response rate were greater than 80% and used culture as a gold standard.

The data abstraction was conducted independently by two of the investigators (HMM, KT). The selected studies were reviewed by using pretested and standardized abstraction form to extract data about title; authors, year of publication, country, study design, study site, study base (population-based or hospital-based), sample size, data collection procedure and response rates. When there was a discrepancy in data abstraction, it was resolved through consensus among the team of investigators.

Epi-info version 3.5.1 and SPSS version 24 software’s were used for data entry and analysis, respectively. The mean, standard deviation, range and median sensitivity, specificity, NPV and PPV of the articles were drawn. The difference was measured using P value ≤ as a significance level.

Summary of articles included in the analysis

A total of 16 articles were included in the systematic review with the oldest publication in the year 1994 and the recent in 2015. The reviewed articles included 50 sample size with the smallest and 1735 samples with the largest. Ten cross sectional and 6 case control studies were reviewed (Table 1).

Table 1: Summary the observational studies assessing the value of Widal test in the diagnosis of typhoid fever included in the systematic review.

Table 2: Analysis of Widal test performance reported by articles included in the review.

Authors declare that they have no conflict of interest associated with the publication of this manuscript.

We want to acknowledge Wollega University for providing internet service and administrative support. We are glad to thank authors of articles reviewed in advance.