Copyright: © 2014 Zagayko AL, et al. This is an open-access article distributed under the terms of the Creative Commons Attribution License, which permits unrestricted use, distribution, and reproduction in any medium, provided the original author and source are credited.

At the present time, oxidative stress was improved as the main complication for a variety of pathological conditions. Especially dangerous component of oxidative stress generation is the formation of Reactive Oxygen Species (ROS). Their formation can cause damage to many cellular components such as lipids, DNA and proteins as a result of their oxidation [1,2]. The level of ROS, which far exceeds the possibilities of protecting cells, can lead to serious cell disorders (e.g., mutation, carcinogenesis, degenerative and other diseases, inflammation, aging, apoptosis etc.) [3]. Peroxidation products content and antioxidant enzymes activity used to be the accepted markers of oxidative stress in a numerous studies [4].

One of the consequences of oxidative stress is the formation of DNA lesions, which can result in genomic instability and lead to cell death [5]. Over 100 different types of oxidative DNA modifications have already been identified in the mammalian genome [6]. High levels of oxidative damage of DNA and RNA may significantly affect its function and cause detrimental effects to cells and organisms [7]. There are a lot of mechanisms to control the DNA/RNA oxidation levels in cells, suggesting that their damage is indeed a significant issue [8]. Guanine is the base that is most susceptible to oxidation, due to its low redox potential, and 8-oxoguanosine is the most widespread lesion. Therefore, this product is the most common and best-characterized lesion created by ROS. These characteristics and the strong relation between ROS production and 8-oxoguanosine make it derivatives the good cellular biomarkers to indicate the extent of oxidative stress [9,10].

Speaking nowadays about investigation of the oxidative stress provocation, development and consequences it is impossible not to mentioned JNK-signaling pathways. During the last years great interest has been directed toward the c-Jun N-terminal kinases (JNK) - group of mitogen-activated protein kinases (MAPKs) that are activated by oxidative stress, pro-inflammatory cytokines, mitogenic stimuli, hyperglycemia etc. Ten JNK isoforms were described from three genes known as: JNK1 (four isoforms), JNK2 (four isoforms) and JNK3 (two isoforms) [11-13]. JNKs play a key role in MAPK pathways provides the interconnection between increased ROS levels and development of disorders such as insulin resistance [14,15]. The JNK pathway is important in modulating cellular responses to stress. Increased oxidative stress was implicated in different animal models of diabetes, insulin resistance, metabolic syndrome etc. through activation of the JNK. JNK regulates the activities of many transcription factors and that the JNK pathway is required for the regulation of inflammatory responses, cell proliferation, and apoptosis [16-19].

Activation of the JNK signaling pathway can mediate many of the effects of stress on insulin resistance through inhibitory phosphorylation of insulin receptor substrate. JNK1 activity is believed to be implicated in obesity and insulin resistance [20]. Several studies have reported that JNK activity is increased in response to diabetes, and elevated JNK activity interferes with insulin action both in cell culture and in animal models [14,17]. The ingestion of a single, sucrose-enriched meal or elevation of portal vein fructose concentrations via fructose infusion in rats in vivo also increased hepatic JNK activity and phosphorylation of insulin receptor substrate-1 (IRS-1) on serine, a downstream target of JNK [21].

Both DNA oxidation and JNK activation could induce the apoptosis in different tissues. But whether the oxidative damage or signaling pathways play the leading role in this process remains unclear.

One aspect of the multifaceted problem of oxidative stress is the study of tissue specific mechanisms of its course. There are a lot of data testifying that both JNK activity changes in different tissues and the DNA oxidative damage accompanied oxidative stress [22-25] but reports involving the investigations of both this indices in liver tissue are partial and not numerous.

So the present study was aimed to investigate the effect of insulin resistance development on JNK activity and DNA/RNA oxidative damage in rat’s liver under fructose rich diet.

The experimental protocol and design were approved by the Institutional Animal Care and Use Committee at National Pharmaceutical University, and the animals were maintained in accordance with the guidelines for animal care and use of laboratory animals.

Body weight (g) was recorded after 3 and 6 weeks of experiment.

On the 22nd and on the 43rd day of experiment (after 12 hours fasting period) animals were killed by decapitation (n=10). Blood samples were collected for plasma preparation.

Other samples of hepatic tissues were used to prepare tissue homogenate (10% w/v) in ice-cold buffer of pH 7.4 (in 0.25 M sucrose, 0.02 Mtriethanolamine hydrochloride containing 0.12 Mdithiothreitol). The homogenate was then centrifuged at 5000g for 60 min to remove debris. The supernatant was again centrifuged at X12,000g for 40 min to obtain cytosolic fraction. All the procedures were carried out at 4°C. Clear upper supernatant fluid was taken for Thio Barbituric Acid-Reactive Substance (TBARS) level, Catalase (C) and Superoxide Dismutase (SOD) activity determination. Protein assays were made by the method of Lowry [27].

TBARS were measured spectrophotometrically at 532 nm against blank and the results are expressed as Malonic Dialdehyde (MDA) formed micromol/L (blood) and nmol/mg protein (liver) [28].

Catalase (CAT) activity in liver was determined based on Aebi’s [29].

All values were calculated as mean ± SD. The ANOVA test (XLSTAT) was employed for statistical comparison between control and various groups. Significance was considered at P<0.05.

IR animals exhibited a significant increase in body weight (Table 1) when compared with intact rats (C) after 6 weeks of experiment. After 3 weeks of FRD diet, body weights were similar in both control and IR rats. But levels of plasma glucose, TAG and FFA in IR animals were significantly different than those of the control animals in both measurement terms.

Table 2: Effect of fructose rich diet on superoxide dismutase and catalase activity, and peroxidation level in liver homogenate after 3 weeks and 6 weeks of diet. 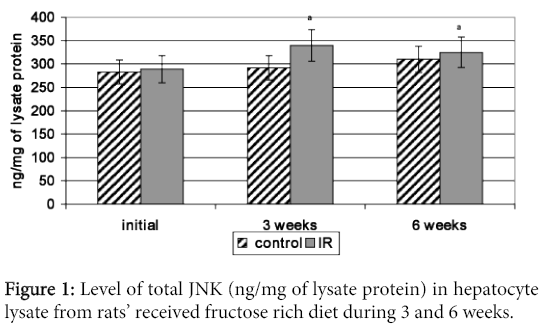 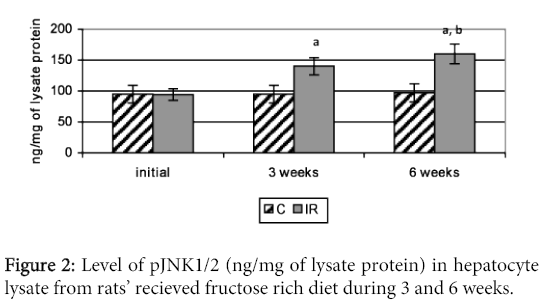 Figure 2: Level of pJNK1/2 (ng/mg of lysate protein) in hepatocyte lysate from rats’ recieved fructose rich diet during 3 and 6 weeks.

Accumulation of 8-OHdG in hepatocytes began to be registered in early terms of experiment (Figure 3). And at a later period the 8-OHdG formation measured in experimental groups showed the significant increasing in it content. 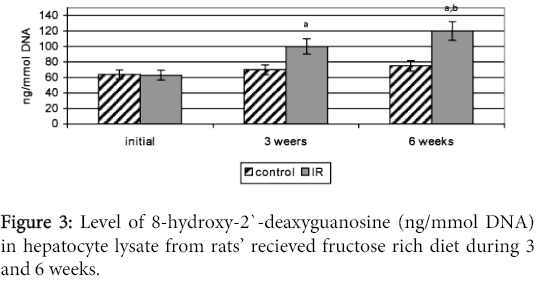 In the present study, investigation of insulin resistant effects confirms our assumption about the correlation between JNK1\2 activation and formation of 8-OHdGin rat liver. Feeding of rats with fructose rich diet for 3 and 6 weeks induced hyperinsulinemia, hyperglycemia, hypertriglyceridemia increasing of FFA and TBARS level in blood. Insulin levels and high triglyceridemia are known to enhance free radical production [30-32]. These results suggest that in our experiment conditions FRD led to metabolic disturbances accompanied by oxidative stress development and proatherogenic state. Also hypercaloric diet provoked the deep shift in hepatocytes metabolism that led to oxidative stress development. Oxidative stress in hepatocytes was evaluated by the measure of the validated biomarkers: catalase and SOD activities and TBARS accumulation.

But all this parameters was significantly increased only to the sixth week of experiment. A number of other studies using the FRD have also reported increased fasting plasma insulin, glucose and FFA [30] as well as a consistent hypertriglyceridemia in accordance with our results [31]. These metabolic parameters indicated the insulin resistance development [33] and could result in type 2 diabetes mellitus (DM2). Representative metabolic changes in IR rats included body weight gain, hyperglycaemia, hyperinsulinemia, increased TAG, FFA and TBARS level in blood.

In the same time, metabolic links between insulin resistance, oxidative stress and other consequences of DM2 still uncertain. The role of signaling passways disorders in this process could explain these interconnections.

Our data showed that in early terms occurred the increase of total JNK and its phosphorylated isoforms 1/2 accumulation in liver. This fact pointed that the JNK overexpressed at the beginning of insulin resistance development (hyperglycemia and hyperinsulinemia). One of JNK overexpression manifestations could be the cell oxidative damage.

The DNA oxidation resulting in accumulation 8-OHdG in tissues was observed in more later early terms compared with JNA activation. These results suggest that the signaling disturbances may play the initial role in metabolic complications of hypercaloric diet and insulin resistance.

At the same time, increasing of DNA oxidation damage testifies that the oxidative stress under insulin resistance development goes far and plays the additional role of an independent factor of metabolism disturbance.

Thus, fructose rich diet in rats provoked the insulin resistance that is accompanied by deep metabolic abnormalities detected in our study. These complications induced by fructose overload are associated with an enhanced oxidative stress which appears to disregulate the JNK pathway.