Copyright: © 2014 Punthawanunt S, et al. This is an open-access article distributed under the terms of the Creative Commons Attribution License, which permits unrestricted use, distribution, and reproduction in any medium, provided the original author and source are credited.

In this paper, the use of optical capsule for drug delivery with security is proposed. In principle, the optical capsules are generated and formed by soliton pulses within a small scale optical waveguide. The trapped molecules (drug molecules) are brought and stably confined within the device, which can move and deliver securely by the capsule gradient force to the required targets. By using the optical switching control, the trapped drugs within the specific capsules can leave to the access points via the through or drop port, where in this case the switching control is employed by light via the control port (add port). Simulation results obtained have shown that the capsule array can also be constructed and formed the large volume of drug delivery, while the switching control can form the uncapsule drugs into the drug target points. In application, the capsule array can be generated and formed the life molecule trapping, which can be available for life molecule transport within the device, for instance, stem cells, which is useful for stem cells dynamically movement, i.e. transportation to the required targets or organs.

The PANDA ring resonator circuit is used to form the orthogonal set of dark-bright soliton pair, which can be decomposed into left and right circularly wave as shown in Figure 1. The two output light signals dark – bright soliton relative in phase after coupling into the optical coupler is π/2. So, the signals coupled into the drop port and through port give the phase difference center wave length at 1.4 - 1.5 μm. The input and control fields at the input are formed by the dark - bright optical solitons as described by the authors in reference [22]. A PANDA ring is a form of modified optical add-drop filter that can be applied to many applications by changing the structure of PANDA and signals, in which the major behaviors are the two nonlinear side rings that can bring the nonlinear effects coupling to the center ring. In operation, the orthogonal dark - bright soliton sets can be generated by using the system as shown in Figure 1. 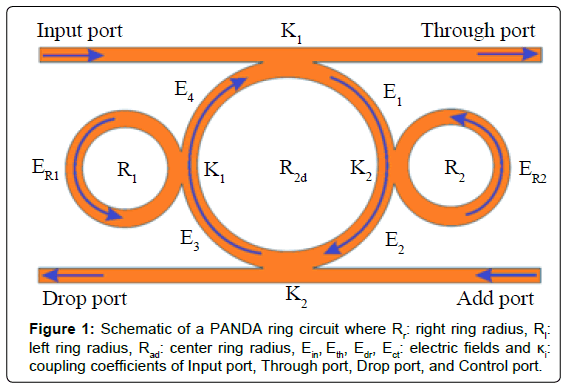 The optical fields (dark and bright solitons) are fed into the ring resonator system at the input port, where R1=R2=10 μm, Rad =100 μm. To form the initial orthogonal states, a dark or bright soliton pulse is input into the system, where the dark-bright soliton pair can be formed on the AlGaAsP waveguides after the lack in phase of π/2 is occurred by a beamsplitter (or optical coupler) and photodetector. The coupling coefficient ratios κ1:κ2 are 50:50, 70:30, 10:90 and κc are 50:50. The system parameters are the ring radii Rad=10 μm, Aeff=0.25μm2, neff=3.14 (for InGaAsP/InP), α=0.1dB/mm, γ=0.001, λ0=1.45 μm. Simulation results are obtained by using the commercial MATLAB program, the optical capsules are generated by using a PANDA ring resonator, where the optical fields are generated by a dark-soliton pair and seen at the through and drop ports, respectively. The input powers of dark and bright solitons are 0.629 W and 16 W with center wavelengths at 1.40, 1.45 and 1.50 μm.

The optical capsule is formed by the orthogonal soliton pair that can be used to perform the trapped molecule capsule as shown in Figure 2, in which the Fscatt is smaller than Fgrad, where the capsule transportation can be formed and move via the surface plasmon light pulse [24,25] along the transmission line (network). Finally, the secure trapped molecules (drugs) can access to the required destination by using the molecular filter and optical capsule switching control. The wavelength phase shift is employed at the through and drop port outputs of a PANDA ring resonator as shown in Figures 3 and 4, where two forms of capsules, for instance, dark and bright soliton are generated, after the phase shifted device is applied, the capsules in Figures 3a and 4a can be released (opened) as shown in Figures 3b-3d and 4b-4d. The control signal is input into the system via the add port, where the required shift in phase of the one of the capsule signals (orthogonal dark-bright soliton pair) is π/2, in which the trapped capsule is now opened, where finally, the required drugs/molecules can be released to the required target (access points) by using the molecular filtering device [25]. 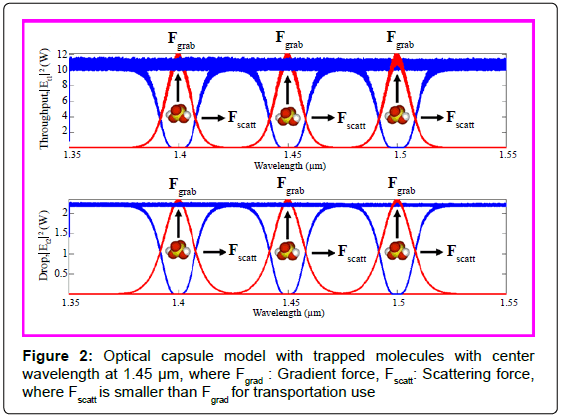 Figure 2: Optical capsule model with trapped molecules with center wavelength at 1.45 μm, where Fgrad : Gradient force, Fscatt: Scattering force, where Fscatt is smaller than Fgrad for transportation use

The optical capsule with drugs can be opened and molecule released to the required destinations by capsule switching control functions. The wavelength phase shift is applied at the through and drop port outputs (add-drop filter), where the two different forms of signals are dark and bright solitons at the center wavelength of 1.45 μm as shown in Figures 5 and 6 respectively. The maximum peak power of capsule switching signals at through and drop port maximum power are 12 and 2 W, respectively. The generated optical capsules are as shown in Figure 5a and 6a,, where the capsule widths decreased from 0.016 μm to 0.0 μm as shown in Figures 5a, 5d, 6a and 6d, respectively, which means that the trapped molecules within the capsule can be harvested by the molecular filter and access to the required destination. The optical capsule size can also be controlled during the switching control application. Therefore, the secure drug delivery system can offer for long distance drug delivery targeting with security via optical networks as shown in Figure 7 [24,25], where the different dominants and advantages of those networks are given in details and found in reference [24]. By using the same principle, after the capsules are generated, where the trapped capsules are formed by passing through the molecule reservoir (storage), in which the trapped molecule capsules are formed and propagated into the required networks for long distance transmission. In practice, the proposed networks can be constructed by using a thin film technology, which can be easily implemented. The required drugs/molecules can be released and used after the capsule switching and molecular filtering devices are provided at the destination ports. We have demonstrated that the optical capsule can be generated and used for long distance drug delivery, in which the switching control function is required and used to release the drug/molecule at the required destinations and networks. By using the dark - bright solitons generated by a PANDA ring, the orthogonal soliton pair can be formed within the system. It can be used to trap and securely transport drugs/molecules into the optical network. In application, the optical capsules with trapped atoms (molecules) can be controlled and moved along the specific waveguide by using the dark and bright soliton pulse, in which the required drugs/molecules can be harvested and used by using the optical capsule switching control device, i.e. a wavelength phase shifter (molecular filter), which is allowed drugs/ molecules to reach the required drug targeting or therapeutic access points. Furthermore, the optical capsule switching array, i.e. many trapped molecule capsules can also be generated and moved by using the proposed system, which can be used to form large scale trapped capsules, i.e. high capacity use, which is useful for medical diagnosis, therapy with security, in which the large area of therapeutic targets or accessed points can be realized. In addition, the use of optical capsule for life cells (stem cells) transportation is also plausible, where in this case the secure transportation with long distance is the advantage.

The authors would like to acknowledge the King Mongkut’s Institute of Technology Ladkrabang (KMITL), Bangkok 10520, Thailand for giving the research facilities