Background: Myocarditis and acute Myocardial Infarction pose a daily diagnostic dilemma. Magnetic resonance imaging and endomyocardial biopsy are the gold standard for definite diagnosis but are rarely performed routinely. Troponin and Creatine phosphokinase (CPK) are elevated in both diseases and could not be used for proper discrimination. We analyzed the dynamics of these serum markers during acute setting by analyzing the tangent slope of their level curve over time.

Methods: We conducted a retrospective cohort study in our medical center. Records of approximately 1,300 patients hospitalized from January 2011 to December 2016 were examined. A total of 193 patients were found to be eligible for the study and were divided into two groups: Myocarditis group (n=133, 69%) and non-ST elevation myocardial infarction group (n=60, 31%).

Myocarditis is an inflammatory process involving heart muscle, characterized by the infiltration the myocardium by inflammatory cells, either by, direct infection of a pathogen or by the response of the immune system to processes such us infectious diseases and systemic diseases [1-3].

The clinical expression of myocarditis is wide, ranging from weakness to signs and symptoms that mimic acute coronary syndrome, such as chest pain, shortness of breath, arrhythmia, elevated cardiac markers levels, elevated ST segment in electrocardiogram (ECG) charts, heart failure, and in rare cases, even cardiogenic shock and arrest [5-9].

The clinical similarity between myocarditis and acute Non-ST elevation myocardial infarction is challenging and has led to extensive research in order to find simple discrimination modality. Cardiac magnetic resonance imaging (CMR) has been tested in many studies and has an average sensitivity of approximately 74%, specificity of 83%, and accuracy of 78% in accordance with the LAKE-LOUISE criteria. This study recommended that, in stable patients with clinical suspicion of myocarditis, CMR should be considered prior to biopsy, but CMR is an expensive test that is not available in all health institutions [10,11].

The gold standard recommended for the diagnosis of acute myocarditis is endomyocardial biopsy. However, this procedure is rarely performed routinely, and, in most centers, it replaced by coronary angiography to ruled out myocardial infarction, especially in high cardiovascular risk profile patients [12-15].

Biomarkers, such as, creatine phosphokinase (CPK), C-reactive protein, Troponin, and natriuretic peptides (NP) were all found to be elevated in serum during acute phase of myocarditis and myocardial infarction which make it unsuitable for proper discrimination [16,17].

Troponin and CPK are the cardiac markers recommended for the diagnosis of myocardial damage owing to their high sensitivity and specificity. Their blood levels are influenced by ischemic time and extent of injury. Troponin level increases within 3-12 hours of the onset of myocardial damage, reaching its peak after 24-48 hours and returning to baseline level after 5-14 days. The sensitivity and specificity of serum troponin within 8 hours of myocardial ischemia are 84% and 81%, respectively. There are two types of troponins, T and I, which have the same clinical significance but different laboratory values [18-20].

Our institution uses a highly sensitive test (Elecsys highly sensitive troponin T, Roche Diagnostics, Switzerland) [21], which allows the detection of myocardial damage in a threshold period of 3 to 4 hours from the onset of ischemia with a sensitivity and specificity of approximately 90% and 99%, respectively. This diagnostic test is used in our institution routinely since October 1, 2010 [22].

CPK is an enzyme that accelerates the conversion of creatine (found in a wide variety of tissues, mostly in skeletal & cardiac muscle, and brain tissue) with the help of adenosine triphosphate (ATP) to phosphocreatine and adenosine diphosphate (ADP).

In myocardial ischemia, CPK level tends to increase within 1.5-12 hours, peaks within 24-36 hours, and returns to normal levels in the blood within 48-72 hours. CPK level has a sensitivity of approximately 90% and low specificity [23].

In our institution, we use the Beckman Coulter CPK test that contains fragments of CPK-MB and CPK-MM (15–30% and 70–85%, respectively). CPK level increases in the blood at a rate of approximately 50% per hour which was measured in several blood tests at different intervals (4, 8, and 12 hours after the onset of myocardial ischemia) and was shown to distinguish, with 94% efficiency, between acute myocardial infarction and skeletal muscle. The extent of ischemic damage, as published by Roberts et al., is estimated by measuring the area below the curve on a graph that measures the level of CPK in the blood versus the time of myocardial ischemia [24].

Our study was designed based on the hypothesis that there is a difference in the relationships between ischemic time and onset of symptoms among the two diseases. Acute myocardial infarction is a rapidly progressive disease (minutes to hours). Onset of symptoms, in particular chest pain, initiate immediately as significant obstruction of coronary artery occurs and myocardial hypoxia begin. Acute myocarditis, on the other hand, is an inflammatory process limited to heart muscle and is mostly (except fulminant myocarditis) a process that progresses relatively slow (hours to days) (Figure 1). 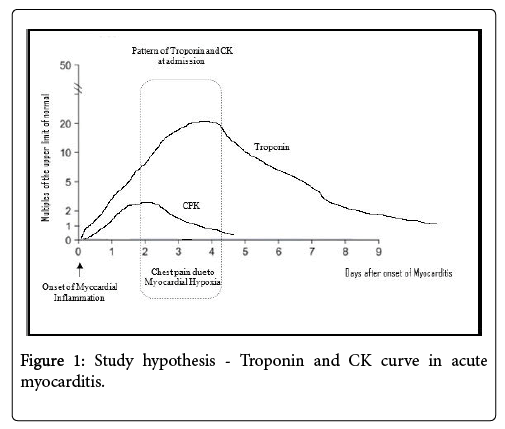 We assumed that chest pain occurs when significant myocardial damage has already occurred, and myocardial hypoxia begins. The process takes several hours to days. This assumption leads us to seek a different rate of progression of serum markers.

This is a retrospective cohort study conducted at the Emek Medical Center. Study population consisted of patients hospitalized due myocarditis and acute non-ST myocardial infarction from January 1, 2011 until the end of December 2016. Data was collected from patients' computerized medical record of Clalit health care service. In the case of absent information, the patient was instructed to complete the missing details.

Troponin and CPK curve, were drawn for each patient according to the values measured on admission and during hospitalization. The tangent slope of the curve was calculated by creating a tangent between two troponin or CPK values. Using Excel software, we calculated the tangent equation and the tangent slope (Figure 2). We only referred to positive slopes, in which troponin level or CPK level were elevated, to examine changes at the relevant time for the diagnosis of the disease. Patient enrolled in the study were those who met the inclusion 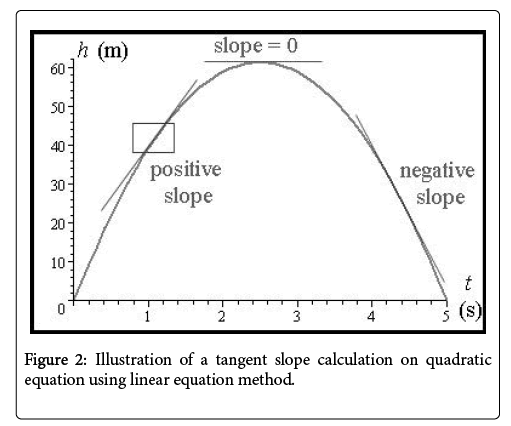 criteria. Patient in both groups must had a definite diagnosis based on cardiac MRI, endomyocardial biopsy (for myocarditis) or angiographic findings support coronary disease following catheterization.

Study was approved by Internal Ethics Committee (IEC) of EMEK Medical Center. General Informed consent was not required due to confidentiality of patient data unless critical medical information was not clear which required the researcher to contact the patient. In the study one patient was been contacted which refused to participate in the study.

Categorical variables are presented using frequencies and percentages, and these variables will be presented using standard distribution indices (mean, standard deviation, median, and so on). The comparison of the continuous variables (such as the troponin slope) between the study groups (myocardial infarction and myocarditis) was tested using the t test (or Wilcoxon test). For categorical variables, the Chi-square test (or Fisher’s exact test) was used. Statistical analyses were performed using SAS software 9.4. The significance will be obtained if p<0.05.

The sample size calculation was based on the assumption that there was a difference of approximately 10% and 300 ng/ml between the troponin-myocarditis gradient and myocardial infarction with a standard deviation of 900 ng/ml. With this in mind, we defined a minimum sample of 143 patients (with a ratio of at least 1:5 between groups) for 80% intensity and 5% alpha (t tailed test).

During the study period, 1313 patients were hospitalized in our intensive cardiac care unit due to acute non-ST elevation myocardial infarction (NSTEMI). Of these, 190 patients did not meet the inclusion criteria (Table 1). A random sample of 65 patients was performed among eligible patients according to the minimum sample size estimate. A total of 151 patients were diagnosed with myocarditis. Of these, 18 patients were excluded from the study, including 6 patients with unclear diagnosis, 7 patient whom cardiac MRI or endocardial biopsy was not performed, 4 patients with a different diagnosis and 1 patient who refused to participate in the study when contacted. The myocarditis group consisted of 133 patients, accounting for 69% of the total study group (Figure 3).

Table 1: Criteria for inclusion and exclusion from research. Flu-like symptoms, in particularly high fever, were frequently observed in the myocarditis group (p=0.001) (Table 3). The median time from flu-like symptoms and high fever to chest pain was 4 and 6 days, respectively. The mean time from onset of pain to referral to a medical center in the NSTEMI group was <24 hours. Only in 3% of the myocarditis group, pericardial friction rub was heard at physical examination.

Myocarditis and acute myocardial infarction can have similar symptomatology, ECG finding, echocardiographic finding and laboratory results but differ greatly by their etiology & pathophysiologic mechanism, and as a consequence of that, by treatment and prognosis.

Myocarditis, as shown by our research, is characterized by young patients, usually younger than 40 years old (70% and 3.3% for the myocarditis and NSTEMI groups, respectively) and low prevalence of cardiovascular risk factors, excluding smoking. Patients diagnosed with myocarditis visits the emergency department after a clear clinical prodrome of flu-like symptoms, in particular high fever in 96% of cases that began during the week prior the appearance of chest pain. Our study indicates a unique progression pattern, yet to be described, of troponin and CPK in acute Myocarditis and Non-ST elevation myocardial infarction.

These studies support our hypothesis that serum markers, as troponin and CPK, behave differently on a time-level curve in acute myocarditis and Non-ST elevation myocardial infarction. Thus far, we have referred to their level in blood as a marker for myocardial damage that characterizes many diseases; therefore, it was difficult to use them for discrimination. Pattern recognition in timeline opens a wide range of possibilities for analyzing different diseases. Based on our data, adding a cutoff threshold value of Troponin-T tangent-slope <1003 (nghL) to a proposed clinical decision model requiring two clinical characteristics as: age <40 years, flu-like symptoms or high fever over the past week, increases the discrimination sensitivity of myocarditis to 98.9% (Table 5 and Figure 4).

Table 5: Proposed predictive model for diagnosis of acute Myocarditis based on study population. 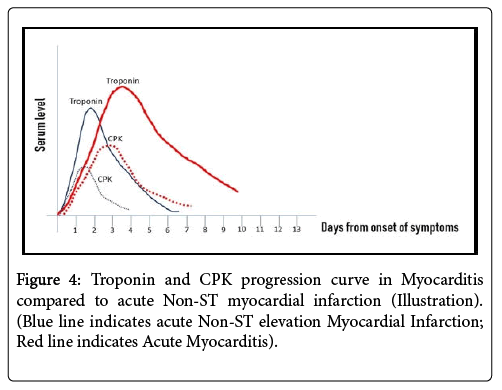 Limitations This is a retrospective research, based on data and diagnoses from medical records from about seven years ago. Diagnosis of myocarditis was made in most cases after coronary catheterization ruled out significant coronary disease, excluding young patient with very low cardiovascular risk profile, were cardiac MRI was used. The algebraic theoretical background to the study was based on simplified time-level curve into Quadratic equation and using linear equation to calculate tangent slope.

In our study, a unique pattern was found in the dynamic behavior of troponin and CPK on time-level curve, which had not yet been described previously. In acute Myocarditis, Troponin and CPK progress to higher peak compared to those of acute Non-ST elevation myocardial infarction. Troponin progress moderately while CPK progress steeply, resulting in lower troponin to CPK ratio in the first 48 hours of admission.

We would like to thank Editage.com for manuscript editing & proofreading service.

This research did not receive any specific grant from funding agencies in the public, commercial, or not-for-profit sectors

Copyright: © 2019 Koren O, et al. This is an open-access article distributed under the terms of the creative commons attribution license, which permits unrestricted use, distribution, and reproduction in any medium, provided the original author and source are credited.