Effect of Eyewash Solution (Commercial Washing Solution) on the Corneal Epithelium: Adverse Effects of Benzalkonium Chloride on the Eye Surface

Copyright: © 2016 Iwashita M, et al. This is an open-access article distributed under the terms of the Creative Commons Attribution License, which permits unrestricted use, distribution, and reproduction in any medium, provided the original author and source are credited.

There are increasing opportunities for itching and foreign-body sensations in and around the eyes in healthy individuals due to an increased numbers of patients with pollinosis and contact lens users, and environmental changes such as an incoming of particles with a particle mass of 2.5 μm (PM 2.5) and yellow sand [1-5]. It is extremely important, as a self-care practice, to evade or eliminate antigens to prevent the occurrence of itching [6] and, in Japan; practicing washing to eliminate antigens in and around the eyes is becoming general practice. Alongside a popularization of commercial eyewash solutions (over-the-counter [OTC] drugs), the interest in eye washing in healthy individuals and patients is increasing.

Eyebon® was the commercial eyewash solution used in the animal experiment and human clinical examinations, the details of which are as follows. The maximum frequency of daily use is six times, based on the manufacturing/marketing approval standards of OTC drugs, [8] and duration of washing is specified at not more than 30 seconds per administration based on a report on corneal epithelium disorders [7]. The solution does not contain BAK. The utilization method and photograph of the eyewash cup are shown in Figure 1.

• Do not wash the opposite eye with the solution used already for washing.

• Do not wash the eye for longer than 30 seconds.

• Be sure to remove contact lenses, if worn, before use of the eyewash solution.

• Wipe off cosmetics and blots around the eyes before use.

• Wash the eye washing cup thoroughly before and after use.

• Wipe lightly the pink crystals that may adhere around the mouth of the container depending on the storage conditions with clean gauze.

Animals: Female Japanese white rabbits (weighing 1.95 to 2.42 kg) were utilized. The experiment was performed in 21 rabbits randomized into three groups each comprising seven animals and the results were summarized after completion.

• Eyebon® (hereinafter referred to as solution A)

• Eyebon® containing BAK (referred to as solution B)

A disposable cup approximately 26.5 mm in diameter containing 5 mL of one of the test solutions was pressed around the right and left eyes of rabbits without anesthesia to expose the eye surface to the test solution for 30 seconds with the eyelids open, and allowed to stand. Eye washing was performed nine times in 1-hour intervals, assuming a severer condition than the upper limit of six washings per day in the dosage and administration for humans.

Corneal epithelium disorders were assessed before eye washing (7 days before the day of eye washing) and 1 hour after eye washing by dropping 2 μL of fluorescein sodium solution and observing the area of corneal abrasion (area stained with a yellow-green fluorescent color) using a slit lamp (SL-2, Kowa Company, Ltd.). The cornea was divided into nine blocks (Figure 2) and the areas stained were scored with nine points at the highest (Table 2). The staining was also performed with lissamine green stain solution and the areas stained were evaluated by the same criteria to observe any defect in the mucin layer. 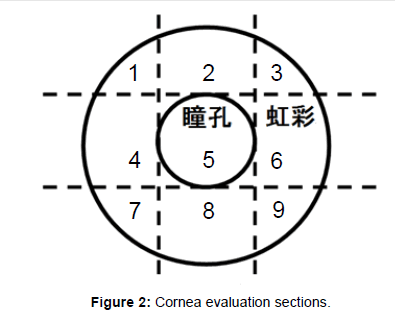 Confocal microscopy was performed before eye washing (7 days before the day of eye washing) and 1 hour after administration using a confocal microscope (Heidelberg Retina Tomograph HRT2R, Rostock Cornea Module Model: HRT2R/RCM, HEIDERBERG ENGINEERING GmbH) and the corneal epithelial cells, keratocytes, and corneal endothelial cells in both eyes were observed and their densities determined. The measurement of the corneal epithelial cells 1 hour after the administration was performed at three sites.

For statistical analysis, the scores at each measurement time interval were compared between the groups using analysis of variance and paired t-test, and the cases with a risk rate of 5% or lower were statistically evaluated.

Subjects: The study was conducted in healthy individuals who visited the outpatient Department of Ophthalmology, Tsurumi University, between February and April 2014, after obtaining the approval from the Ethical Review Committee at Tsurumi University. This study was based on the study protocol and the ethical principles of the Declaration of Helsinki. Thirty subjects aged between 23 and 60 years with a mean age of 39.7 years participated in the study. Inclusion criteria comprised the following:

• Healthy individuals who had not used contact lenses for at least 1 day before the study.

• Healthy individuals aged 20 years and older at the time of informed consent.

• Healthy individuals that received a full explanation on the objectives and methods of the study, expected effects and adverse drug reactions, respect for the privacy, recompense and compensation, and who themselves or their legal representatives voluntarily provided consent for study participation.

• Eyebon® (hereinafter, referred to as solution A)

• Eyebon® containing BAK (referred to as solution B)

Evaluation methods: The subjects washed the right eye with the physiological saline solution as the control and the left eye with the respective test solutions without anesthesia. The eyes were washed for 30 seconds with 5 mL of the eyewash solution at a time using the eye cup for commercial eyewash solutions (eye cup attached to Eyebon®). Eye washing was performed six times in total in 1-hour intervals, based on the upper limit specified in the dosage and administration.

For statistical analysis, the inter-group comparison of scores and two-sample comparisons were performed using the Tukey multiple comparison test and non-paired t-test, and cases with a risk rate of 5% or lower were statistically evaluated. 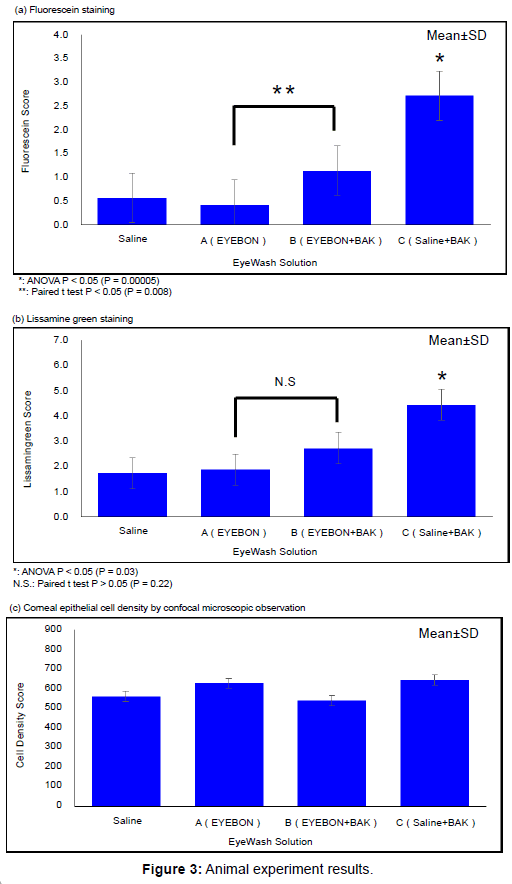 Figure 4: An example of fluorescein and lissamine green staining scoring in a rabbit after washing nine times with physiological saline containing BAK.

Figure 5: An example of confocal microscopic observations in a rabbit after washing nine times with physiological saline containing BAK. Figure 6: Clinical examination results (before and after eye washing comparisons).

Inter-group comparison of scores after eye washing (Figure 7): The cornea was observed immediately after the last eye washing (session 6). Solution A group showed a significantly lower score in the fluorescein and lissamine green staining compared with solution B group. Although no significant difference was noted in fluorophotometry, score were lower than that in other groups. Solution C group showed a significantly higher score in all evaluation items. For reference, photographs of fluorescein and lissamine green staining (Figure 8) are presented. Figure 8: An example of fluorescein and lissamine green staining scoring in a human eye after washing nine times with physiological saline containing BAK or Eyebon®.

In the experiment using rabbits, the effects of eyewash solutions on the cornea were examined. Compared with eye washing using the physiological saline solution (control), eye washing with the physiological saline solution containing the preservative BAK showed a significant difference in fluorescein and lissamine green staining scores, suggesting corneal epithelium disorders and collapse of the mucin layer associated with BAK. With Eyebon®, no significant differences were recorded in any of the items compared with the physiological saline solution even though eye washing was performed nine times, exceeding the upper limit specified in the dosage and administration for humans. There were also no significant differences in the observations of the corneal epithelium, keratocytes, and corneal endothelium by confocal microscopy. This may indicate that the corneal disorders associated with BAK were limited to the uppermost layer of the cornea. In the comparison between Eyebon® and Eyebon® containing BAK, a significant difference was recorded in the fluorescein staining, indicating corneal disorders caused by BAK. In lissamine green staining, however, the lack of significant difference indicated absence of a disorder in the mucin layer. Eyebon® contains ingredients such as sodium chondroitin sulfate used for the treatment of dry eyes and this may have reduced the collapse in the mucin layer by BAK. These findings suggest that the eyewash solutions lacking BAK had less influence on the corneal epithelium and can be used safely. We also performed a clinical study in healthy humans, referring to the results of the animal experiment.

In the healthy individual study, eye washing was performed for 30 seconds durations, six times in total at 1-hour intervals, based on the upper limit specified in the dosage and administration for humans. The physiological saline solution containing BAK showed significant differences, not only in the fluorescein staining and lissamine green staining performed before and after the eye washing (similar to the animal experiment), but also in the fluorophotometry. Eyebon® showed significantly lower scores in the fluorescein and lissamine green staining compared with Eyebon® containing BAK. These results indicate corneal epithelium disorders and collapse of the mucin layer due to BAK, suggesting that BAK could aggravate eye diseases such as dry eyes and superficial punctate keratitis.

Akei et al. examined allergic reactions caused by the adhesion of pollens on the skin in percutaneously sensitized mice and reported systemic induction of Th2 immune response and susceptibility to induction of allergic rhinitis [9]. Other studies have reported aggravation of transbronchial allergic reactions in mice with atopic dermatitis induced by percutaneous sensitization [10], and complication of asthma and allergic rhinitis in 70% of patients with severe atopic dermatitis [11]. These results suggest that reduction of the percutaneous sensitization in the skin with pollen can also prevent the effects on other allergic disorders.

A new concept, eyelid skin pollinosis (pollen dermatitis or pollen blepharitis), has been proposed suggesting that adhesion of pollens to the thin and soft eyelid skin easily induces skin allergy [16-18]. In such patients, ocular instillation is not as effective because itching occurs in the eyelid skin rather than the eyeball. These patients are thought to require treatment of the eyelids [19,20] and eyewash solutions could be one of the methods for treating or preventing itching without any adverse drug reactions.

There is an increasing interest in healthy individual eye washing due to pollinosis and an increase in the number contact lens users. Eyebon® has a big share in the commercial eyewash solution market and the results obtained in the present study are beneficial because they demonstrate the safety of the product, which does not contain BAK. In addition, eye washing could be one of the safest methods for washing the anterior ocular segment as a countermeasure against increasing trends of yellow sand and PM 2.5 in the future. We will continue to investigate the details of its safety, as well as its efficacy, in future studies.

The abstract of this paper was presented with the title of “Evaluation of safety of eye washes with commercial washing solution” at ARVO Annual Meeting 2015 (Denver, Colorado, USA).

This study was funded by Tsurumi University, Yokohama, Japan (HF).