Copyright: © 2017 Gupta M, et al. This is an open-access article distributed under the terms of the Creative Commons Attribution License, which permits unrestricted use, distribution, and reproduction in any medium, provided the original author and source are credited.

In cerebral palsy (CP) cognitive development is one of the major problems seen which hamper the mental development and deprive the child to achieve normal development to survive the normal quality of life. In cognitive impairment for CP children now a day, there are lots of conventional treatments available such as mental exercise, special education and schooling are available but rTMS is new treatment approaches to change the scenario in cognitive domain in various neurological disorders. The aim of this study was to observe the changes in Vinland social maturity scale (VSMS) by using rTMS therapy on CP children. VSMS is a one of the psychological tool used to assess the cognition, social and communication skills in many domains was used as assessment tool. After the completion of treatment we concluded that rTMS have promising result in various cognitive domains. The result shows that in control group(CG) and experimental group(EG) both have significant result that is p<0.03 and p<0.001 respectively, but EG have more significant result as compare to CG. Similarly, in mean change value scores of both the groups shows that 0.8% in CG and 1.03% in EG it means EG have 0.23% more result than CG with rTMS therapy.

Repetitive transcranial magnetic stimulation (rTMS) is one of the established investigative tool in the cognitive neurosciences [1,2]. Several researches worked on exploit its potential in studying the perception [3], attention [4] and learning [5]. It is one of the noninvasive stimulation techniques that repeatedly stimulate cerebral cortex by train of magnetic pulses. The stimulation modulates the cortical excitability by producing physiological and functional changes in cerebral cortex. These changes help in neuromodulator that helps in treatment of movement disorder and various neurological disorders [6]. Application of rTMS in cognition was thoroughly review by V. Walsh et al., where many neurological diseases related to cognitive ability were discussed [7].

Spastic cerebral palsy (sCP) is a one of the neurodevelopment disorder where cognitive ability is effected with other associated problems such as delayed motor development, impaired speech, low vision and locomotor disability due to brain damage at the time of birth to 3 years of life. Which result motor and sensory damage leading to poor global developmental delay and poor performance of activity of daily livings (ADLs) [8]. Cerebral palsy (CP) itself has different form in which sCP is one of the type of CP.

Impaired cognitive ability in sCP is one of the major issue due to which these children are not able to perform their independent ADLs and not come up with their peer groups. Thus in this study we aim to evaluate the effect of rTMS on cognition in sCP children with physical exercises.

Total twenty subjects as diagnosed case of spastic CP by pediatric neurologist participated in this study. Written consent after explaining the treatment process was collected from the parent of the entire participants who underwent the therapy. All the selected subjects equally divided into two group control group (CG) (n=10) and experimental group (EG) (n=10). Only participant who comes close to our inclusion criteria; that is age group 2-10 years, willingness to participate and epilepsy under control by antiepileptic drugs and exclusion criteria that is age group not more than 10 years and below 2 years, not willingness to participate and any metallic implant were excluded from the study.

Stimulation device and process of stimulation

In this study TMS Neuro-MS/D Variant-2 therapeutic (Neurosoft, Russia) with angulated figure of eight shaped coil (AFEC-02-100-C) was used for the stimulation. The device had two channel Neuro-EMGMS digital system for measuring the motor threshold. During the magnetic stimulation figure of eight magnetic coil place on the cranium that stimulates the motor neurons. In this study coil was placed on frontal lobe area which is known to be the important part in integrating non-task based memories stored across the brain.

The outcome measure used in this study was Vinland social maturity scale (VSMS) which is approved for the assessment of cognition and social skill from age group one year to till twelve years for pediatric neurodevelopmental disease. VSMS have total eight domains such as self-help group, self-help eating, self-help dressing, occupation, socialization, communication and locomotion. VSMS is descriptive based assessment tool designed to evaluated cognitive, independency, communication and social skills [9].

The study was conducted after the approval of the institutional ethics committee for human samples or participants (IECHSP) from North Eastern Hill University, Shillong, Meghalaya. In this study the diagnosed cases of sCP were randomly selected into two groups named as control group (CG) and experimental groups (EG) according to our inclusion and exclusion criteria of the study. In CG all selected participants were provided only physical therapy for 30 minutes daily for 20 days (5 days per weeks for 4 weeks) whereas in EG all selected participant were employed rTMS 10 Hz frequency comprising of 2500 pulses (50 pulses per train with total 50 trains having inter-train delay of 20 seconds) for 20 minutes daily for 20 day with physical therapy 30 minutes. Before conducting and after completion of 20 session pre and post data using VSMS outcome measure data were collected for the statistical analysis.

All statistical analysis was performed using SPSS 20.0 (Armonk, N.Y, IBM Corp., USA) and Microsoft Excel 2010. The pre and post VSMS scores for each group were analyzed with a paired-sample t-test to determine statistical significance. The mean and median VSMS scores were used to analyzed percentage of functional gain in both the groups (CG and EG). The p-value less than 0.05 were considered statistically significant. 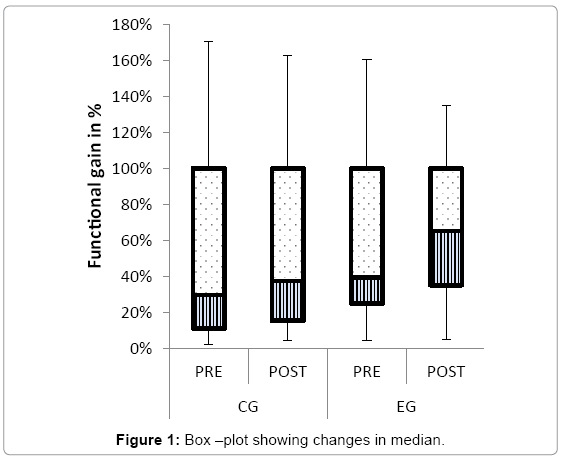 In CP, cognitive impairment is one of the major factors which limit the social and intellectual development due to which these children are not able to performance satisfactory skill for daily living activities. The main focus of this study is to see the change in social skills by employing rTMS which is now a day an established investigative tool in the cognitive neurosciences [10]. According to Ashbridge et al. the use of single pulse TMS helps to investigate a visuo-cognitive function. In another study on cognition by Paus et al. reported successful combination of TMS and positron emission tomography (PET) to study brain signal connectivity in patient with stroke [11]. In our study we employed rTMS for cognitive development in CP children and we concluded that rTMS helps in proving meaningful result in various cognitive domains such as socialization and understanding. In future study we targeted to work on higher brain function for more prices results in cognitive domains.

This work is supported by funding received (Ref: SEED/TIDE/007/2013) from the Technology Intervention for Disabled and Elderly of the Department of Science and Technology (DST), Government of India, New Delhi. The authors also acknowledge the support of all the staffs of UDAAN- for the differently abled, Delhi. The authors are grateful to the children and their parents for participating in this sponsored study.