Copyright: © 2015 Waghavkar SN, et al. This is an open-access article distributed under the terms of the Creative Commons Attribution License, which permits unrestricted use, distribution, and reproduction in any medium, provided the original author and source are credited.

Background and aim: Trials have shown modest clinical improvement in disabilities after stroke with the use of different techniques; however most of the treatment protocols for the paretic hand are either expensive or labour intensive, which makes the provision of intensive treatment for many patients difficult. Mirror therapy (MT) is an alternative therapeutic intervention that uses the interaction of visuomotor-proprioception inputs to enhance movement performance of the impaired hand. It has been suggested that mirror therapy is a simple, inexpensive and, most importantly patient-directed treatment that may improve hand function. The aim of this pilot study was to assess the effectiveness of Mirror Therapy to improve hand functions in acute and sub-acute stroke patients.
Method: In a pre-test-post-test single-group design, a convenience sample of 11 of acute and sub-acute stroke patients at Department of Physiotherapy, in Pad. Dr. Vikhe Patil Hospital, Ahmednagar. Participants received a Mirror Therapy program, performing various movements by the less affected upper extremity and observing in the mirror box along with conventional management, 4 days per week for 4 weeks. Fugl-Meyer Assessment (FMA), which includes subsection hand (FMA-WH), Wolf Motor Function Test (WFMT-WH) were used as an outcome measure.
Results: Participants showed significant improvement for FMA-WH and WFMT-WH at post assessment. WFMTWH changed from 7.545 to 15.727. (p=<0.0001) whereas FMA-WH changed from 34.18 to 47.36. (p=0.0002).
Conclusion: The preliminary findings suggest that Mirror therapy can be a useful intervention supplement in rehabilitation of patients; it provides a simple and cost effective therapy for wrist and hand motor recovery in acute and sub-acute stroke patients. Further studies in the form of randomized trials are needed to validate its effectiveness.

Stroke is a global epidemic and an important cause of morbidity and mortality. As defined by WHO stroke is “rapidly developing clinical signs of focal (or global) disturbance of cerebral function, with symptoms lasting 24 hours or longer or leading to death, with no apparent cause other than of vascular origin” [1]. Stroke remains the leading cause of disability and the third leading cause of death among adults in the United States of America [2]. In India, stroke is perhaps the second commonest cause of death and probably the most common cause of disability [3,4]. According to W.H.O (16 Nov. 2011) in India incidence of stroke was 130/100000 individuals every year [5].

More than 50% stroke patients remain vocationally impaired and about 30% need full support for activities of daily living [3]. Small trials have shown modest clinical improvement in disabilities after stroke with the use of different techniques: Electrical stimulation over the surface of muscles to contract them for simple movements [4], intense practice with electromechanical devices that assist in reaching or stepping [5], non-invasive stimulation of the peripheral nerve or direct stimulation of the motor cortex to augment cortical plasticity and learning during arm therapies [6,7], which may modulate neurotransmission and learning [8] and the use of mental imagery of an action[9].

However most of the treatment protocols for the paretic hand are either expensive or labour intensive and require manual interaction by the therapists for several weeks, which makes the provision of intensive treatment for many patients difficult. It has been suggested that mirror therapy is a simple, inexpensive and, most importantly, patientdirected treatment that may improve upper extremity function. Since few studies have investigated mirror therapy for patients with stroke, there is no agreement on aspects such as optimal patient selection or duration and intensity of training of this new therapeutic approach. Incorporating mirror therapy into the conventional programme at the early stages of treatment and applying it for a long period might be even more beneficial for improving hand function. A potential limitation of previous studies was generalizability of the results. Inclusion criteria were based only on the population of sub-acute stroke inpatients (3- 12 months) after first stroke without severe cognitive function. In our study patients were taken acute (0–2 months) as well as sub-acute stroke (3 to 12 months post stroke).

Mirror therapy has been seen to provide encouraging results in treatment of hemiparesis [10-14]. It seems likely that this illusion enhances activation of the premotor and motor cortex in a similar way to action observation or motor imagery. This effect can be explained by the activation of so-called mirror-neuron system. Mirror neurons are neurons that fire when the subject performs a movement, but also during observation of the same movement by someone else, and they seem to play a central role in the process of motor re-learning by action observation [12].

Intact hand function is crucial to manual exploration and manipulation of the environment. Hand function disability following stroke poses as one of the greatest obstacles to independent living, thus leading to the need of incorporating newer techniques and approaches conventional rehabilitation that are invested in improving functional recovery of motor skills after stroke. There is a need to incorporate simple, easy, economic, patient directed and effective treatment techniques to enhance recovery following stroke. Mirror Therapy is a newer technique which is thought to affect neuroplasticity and is simple and convenient to apply. It has been under research for their role in motor recovery and functional improvement of the paretic hand. Multiple systematic reviews have found Mirror Therapy individually to be effective treatment adjuncts to conventional therapy, thus serving as historical control for our study.

Thus the purpose of this study was to evaluate the effectiveness of Mirror Therapy on hand function improvement in acute and sub-acute stroke patients.

This study was an experimental Study conducted in Department of Physiotherapy, Pad Dr. Vitthalrao Vikhe Patil Hospital, Ahmednagar. After obtaining ethical clearance from Institutional Ethical Committee all the patients of stroke with hemiparesis were examined and screened according to the inclusion criteria (Age between 40 to 60 years, First ever unilateral stroke, The stroke duration 0-1 year, Patient should have voluntary control 1-3 according to Hand Voluntary Control Scale, Must have intact/unaffected extremity, Tolerates upright position) and exclusion criteria (Patients who are not medically stable, Patients who have dementia, Other musculoskeletal, vascular related conditions, Impaired cognitive functions, Sensory loss over hemiplegic hand, Cardiac pacemaker). Eleven patients who fulfilled the inclusion criteria were enrolled in the study after taking an informed consent. These 11 patients were given mirror therapy in addition to the conventional stroke rehabilitation programme. The conventional programme was patient-specific and consisted of neuro developmental facilitation techniques, stretching and strengthening exercises. During the mirror practices the initial 20 minutes of therapy sessions, each participant were participate in activities focusing on the use of neurodevelopmental spasticity inhibiting techniques, followed by passive range of motion and gentle massage. This relaxes the participants and prepared them to begin the therapy sessions. During the first 20 minutes of each session, the participants were also participate in mental preparation by closing their eyes and imagining themselves using the affected limb in previously-demonstrated motions including wrist extension, supination, and pronation. Following the warm-up session, a 30 minute mirror box training session commenced. Subjects were seated on a chair close to a table on which a mirror box was placed vertically. The involved hand was placed behind the mirror and uninvolved in front of the mirror. The subjects were asked to perform forearm supinationpronation, wrist flexion-extension, finger flexion-extension, abduction, adduction, opposition, fisting on the paretic side while the subjects looked into the mirror watching the image of their non-involved hand thus, seeing the reflection of the hand movement projected over the involved hand. During the sessions subjects were asked to try and do the same movements with the paretic hand simultaneously.

Table 1 and 2 and Figure 1 show that at the beginning of the study, Wolf Motor Function score was 7.545+1.864. After 4 weeks of mirror therapy and exercise programme, mean of study group increased to 15.727+2.453 and there was an extremely significant difference within 95% confidence interval, p-value <0.0001. 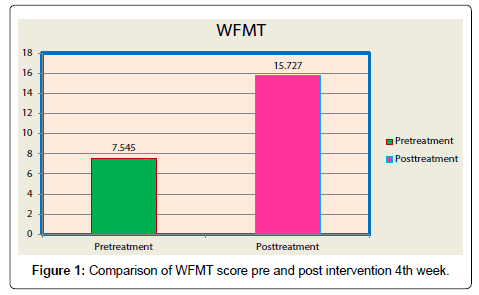 Table 3 and Figure 2 show that at the beginning of the study, Fugl Meyer Assessment score was 34.18+8.388. After 4 weeks of mirror therapy and exercise programme, mean of study group increased to 47.36 + 2.541 and there was an extremely significant difference within 95% confidence interval, p-value 0.0002. 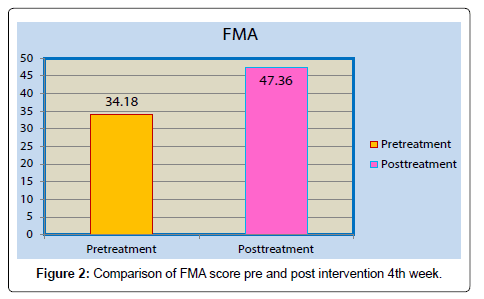 In our study we found significant improvement for FMAWH and WFMT-WH at post assessment. The neural mechanisms underlying the efficacy of mirror therapy are not clear, but the resulting improvement in motor function is an instantiation of use dependent neural plasticity, which has been demonstrated in the form of expansion of topographic maps in a variety of situations. The mirror provides patients with visual input. The mirror reflection of the moving good hand looks like the affected hand moving correctly and perhaps substitutes for the often decreased or absent proprioceptive input. Use of the mirror may also help recruit the premotor cortex to help with motor rehabilitation [10]. The premotor cortex has a number of features suggesting it might possibly be a link from the visual image in the mirror to motor rehabilitation following stroke. Premotor cortex has significant contributions to the descending corticospinal tracts, more bilateral control of movement than the motor cortex itself and intimate connections with visual input. On a number of neurological and psychological levels, mirror therapy may help to reverse elements of learned disuse of the affected limb [11]. Mirror neurons are bimodal visuomotor neurons that are active during action observation, mental stimulation (imagery), and action execution. For example, it has been shown that passive observation of an action facilitates M1 excitability of the muscles used in that specific action. Mirror neurons are now generally understood to be the system underlying the learning of new skills by visual inspection of the skill [12]. In addition to previously reported “observation with intent to initiate” or “stimulation through simulation” mechanisms based on increased visual or mental imagery feedback, another possible mechanism for the effectiveness of the mirror therapy might be bilateral arm training. In the study by Yavuzer et al. [12] they directed the patients to move the paretic hand as much as they could while moving the non-paretic hand and watching the image in the mirror in a bilateral training approach.

The preliminary findings suggest that Mirror therapy can be a useful intervention supplement in rehabilitation of patients; it provides a simple and cost effective therapy for wrist and hand motor recovery in acute and sub-acute stroke patients. Further studies in the form of randomized trials are needed to validate its effectiveness.