Copyright: © 2017 Mourhat Z, et al. This is an open-access article distributed under the terms of the Creative Commons Attribution License, which permits unrestricted use, distribution, and reproduction in any medium, provided the original author and source are credited.

The major components of olive oil are: oleic acid, phenolic constituents and squalene. The main phenolics include hydroxytyrosol, tyrosol, and oleuropein, which occur in highest levels in virgin olive oil and have demonstrated antioxidant activity. Oxidative stress caused by production of reactive oxygen species is linked to various pathological conditions [1]. Several authors have shown that free radicals lead to the pathogenesis of a various disease including diabetes, hypertension, inflammation and cancer [2]. Reactive oxygen species (ROS), naturally generated during the metabolism, can damage biological structures such as proteins, lipids or DNA. Normally, cells defend themselves against ROS damage with enzymes, but sometimes the natural defenses are overwhelmed by an excessive generation of ROS and a situation of oxidative stress occurs. In this case, cellular and extracellular macromolecules (proteins, lipids, and nucleic acids) can suffer oxidative damage, causing tissue injury [3,4].

A wide variety of electrochemical sensors and biosensors have already been proposed for antioxidant capacity evaluation [5-14]. Most of them are based on the amperometric detection of H2O2, resulting from the catalyzed dismutation of superoxide radicals (O2-.) in presence of superoxide dismutase. The purpose of this work was to investigate the electrochemical properties of antioxidants contained in virgin olive oil, using copper modified carbon paste electrode, site of oxidative reduction reactions.

All chemicals were of the highest quality. Graphite powder (spectroscopic grade RWB, Ringsdorff-Werke GmbH, Bonn-Bad Godesberg, Germany) was obtained from Aldrich and was used without further purification. CuSO4 was obtained from Merck chemicals. Deionised water was used to prepare all solution.

The carbon paste unmodified was prepared by adding paraffin oil to carbon powder and thoroughly hand-mixing in a mortar. The resulting paste was packed into the electrode and the surface was smoothed. The modified electrode was developed by depositing the copper at fixed potential (0.1 V for 1 h) onto the carbon paste electrode surface.

Cyclic voltammograms of Cu-CPE is recorded in the electolytical solution 0.1 M Na2SO4 at scan rate of 100 mV/s is shown in Figure 1. It is a typical voltammogram of copper, which shows two redox peaks, the first one in the direction of the cathodic scan, at about -0.9 V, and the second one, in the opposite direction at -0.2 V. 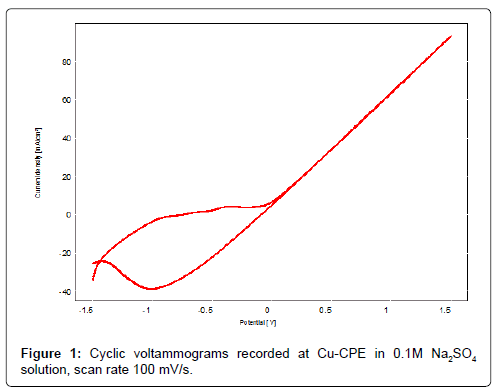 The EIS experiments were carried out in 0.1 mol L−1 Na2SO4 in order to confirm the mechanisms suggested in the voltammetric part of this work regarding the Cu-CPE interaction. Figure 2 shows the Nyquist plot for Cu-modified electrode included a semicircle at higher frequencies corresponding to the electrontransfer limited process and the linear part at lower frequencies corresponding to the diffusion process. 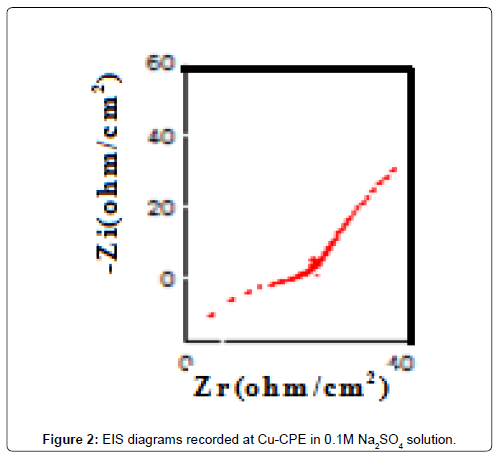 The surface structure of copper modified carbon paste surface was observed using scanning electron microscopy (Figure 3). The film layer of copper was formed on the surface of carbon paste electrode; it was not disintegrated or detached from the surface when immersed in the electrolytic solution. The surface has a porous shape and constitutes by clusters of copper of different dimensions, forming a rough film. First, we plotted the calibration curve, of H2O2 from the SWV recorded at Cu-CPE in 0.1M Na2SO4, containing various concentrations of H2O2. The square wave voltammetric response was almost linear dependent on the radical oxygen concentration (Figure 4). 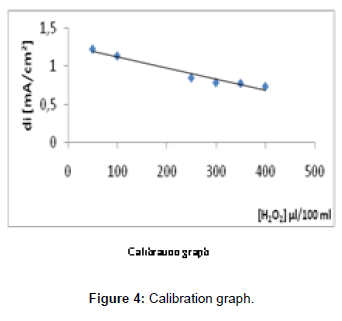 After the addition of 350 μl/100 ml of the sample (Virgin olive oil –VOO-), the H2O2 reduction current density decreases (Figure 5), subsequently leading to a decrease in free radical concentration in the solution, which leads to the conclusion that VOO inhibits Oxidizing capacity of H2O2. 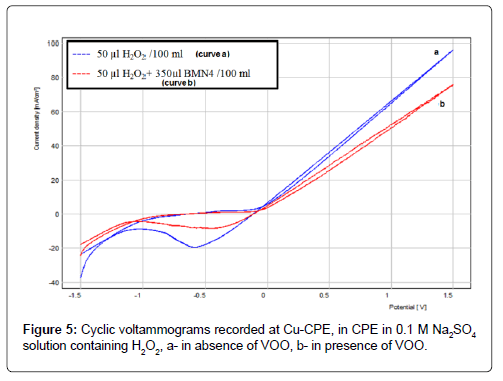 Figure 5: Cyclic voltammograms recorded at Cu-CPE, in CPE in 0.1 M Na2SO4 solution containing H2O2, a- in absence of VOO, b- in presence of VOO.

Figure 6 shows the performance of the copper modified carbon paste electrode in the presence of antioxidant (350 μL of virgin olive oil) and the hydroxyl radical (50 μl). To perform the electrochemical study all current peaks were compared with the signal current obtained with the H2O2. The electrochemical reduction of radical is manifested in square wave volatammetry by a defined peak at around -0.6 V. The addition of the antioxidant sample to the solution containing the free radical causes the decrease in the current density of this peak [14-18]. 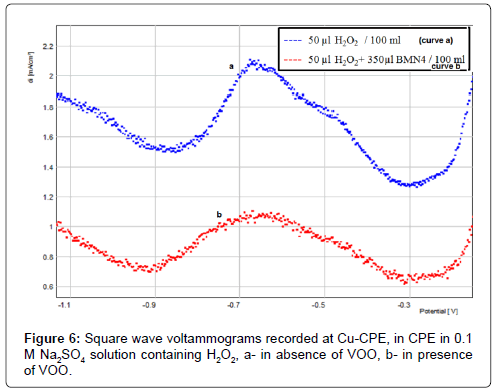 Figure 6: Square wave voltammograms recorded at Cu-CPE, in CPE in 0.1 M Na2SO4 solution containing H2O2, a- in absence of VOO, b- in presence of VOO. 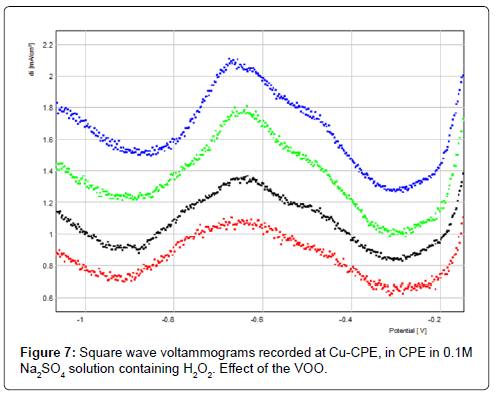 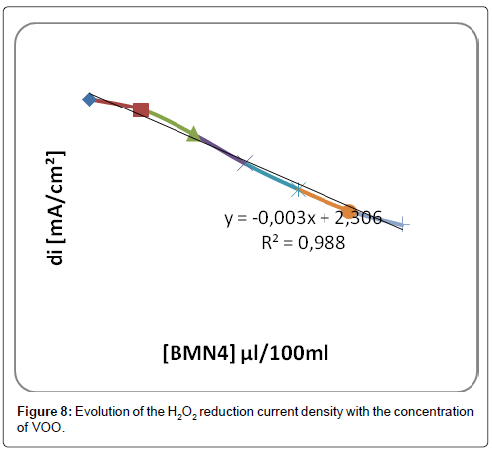 Figure 8: Evolution of the H2O2 reduction current density with the concentration of VOO.

The corresponding antioxidant capacity values, was calculated using the relation:

In this work we calculated and compared the antioxidant capacities of several samples of virgin olive oil, collected on different sites of the Tadla Azilal region, Morocco. The results are shown in the following histogram (Figure 9) 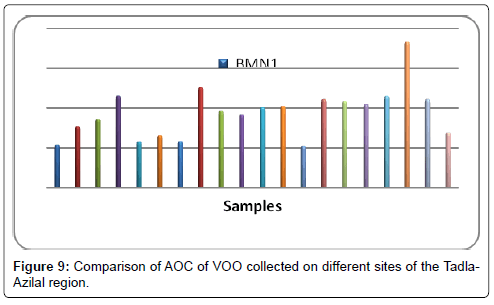 Figure 9: Comparison of AOC of VOO collected on different sites of the Tadla-Azilal region.

A copper modified copper electrode for the AOC quantification of a variety of virgin olive oil was prepared and characterized in electrolytic media. First, a calibration curve is determined from the relationship between the reduction current density of H2O2 and [H2O2]. The virgin olive oil had the capacity to inhibit the superoxide radical reduction which is responsible for the oxidation of the cells, causing subsequent oxidative stress. Several virgin olive varieties have been tested and their AOCs have been determined, these samples harvested at different sites in the Tadla Azilal region, Morocco. The largest AOC has exceeded the lowest of the order of 20%.