+44 7482 874137
Electrochemical Sensor for the Determination of Adrenaline in Presence of Acetaminophen at Poly (Alanine) Modified Carbon Paste Electrode: A Cyclic Voltammetric Study

Electrochemical Sensor for the Determination of Adrenaline in Presence of Acetaminophen at Poly (Alanine) Modified Carbon Paste Electrode: A Cyclic Voltammetric Study

Copyright: © 2016 Harisha KV, et al. This is an open-access article distributed under the terms of the Creative Commons Attribution License, which permits unrestricted use, distribution, and reproduction in any medium, provided the original author and source are credited.

The electropolymerisation of DL-alanine was carried out at the surface of carbon paste electrode by cyclic voltammetric (CV) technique. The fabricated electrode was used for the electrocatalysis of adrenaline at neutral pH. The key parameters like influence of scan rate and concentration reveals the adsorption controlled process. The lower limit of detection was calculated to be 28.0 nM in the linear range of 10 to 60 μM by CV technique. Further, the poly (alanine) modified carbon paste electrode can be used for the selective determination of adrenaline in presence of acetaminophen. Overall, the fabricated electrode can be used as a promising analytical sensor in the determination of adrenaline in pharmaceutical and biological samples.

Adrenaline (AD) is one of the neurotransmitter catecholamine found in the mammalian central nervous system; exist in the form of large organic cations in the nervous tissue and biological body fluid [1]. It serves as a neurotransmitter for conveying the nerve pulse to different organs. Adrenaline is sympathomimetic drug widely used for the treatment of hypertension, cardiac arrest, myocardial infection and cardiac surgery in clinics. It also used to stimulate heartbeat and to treat emphysema, bronchitis, bronchial asthma and other allergic conditions, as well as in the treatment of the eye disease, glaucoma [2]. Variation in the concentration of AD leads to severe disease. Therefore, sensitive determination of adrenaline concentration has an important significance to medicine, nerve psychology and life science [3]. Several methods have been reported for the determination of adrenaline such as high performance liquid chromatography [4-6], fluorometry [7-9] chemiluminescence [10,11], capillary electrophoresis [12] and spectrophotometry [13]. However, such methods are quite complicated since some of these methods need derivatization or combination with various detection methods. They also have low sensitivity and specificity. Some reports have shown the electrochemical response of adrenaline on different kinds of electrodes such as poly (osmiumoxide/ hexacyanoruthenate) film modified CPE [14], poly (eriochrome black T) film modified GCE [15], poly (1-Methylpyrrole) modified glassy carbon electrode which exhibited good electro catalytic activity for the detection of adrenaline [3].

Acetaminophen or paracetamol (AP) is widely used as an antipyretic and analgesic drug. It is an effective and safe analgesic agent used for the relief of mild to moderate pain associated with headache, backache, arthritis and postoperative pain [16]. It is also used for the reduction of fever caused by viral and bacterial origin. It relieves pain and fever by inhibiting prostaglandin’s synthesis in the central nervous system and sedating hypothalamic heat-regulating center [17,18]. Generally, acetaminophen does not exhibit any harmful side effects. However, hypersensitivity or over dosage of AP leads to the formation of some liver and nephrotoxic metabolites. Moreover, the hydrolytic degradation product of acetaminophen is 4-aminophenol which can cause fatal hepatotoxicity and nephrotoxicity. This species can be found in pharmaceutical preparations as a degradation product of acetaminophen or as a synthetic intermediate [19]. Acetaminophen drug is available in different dosage forms of tablets, capsules, suspensions. Thus development of simple, sensitive and accurate analytical methods for determination of acetaminophen in pharmaceutical products and human plasma is of great importance [20]. Many analytical methods are reported to determine the acetaminophen concentration such as spectrophotometry [21], high performance liquid chromatography [22], and voltammetry [23]. These techniques are generally expensive and time-consuming. There are several number of modified electrodes like titanium oxide nanoparticle MPE, nafion/TiO2 – graphene modified GPE, ZrO2 nano particle modified CPE, single walled carbon nanotube MCPE have been reported for the determination of acetaminophen by using voltammetric techniques [20,24-26].

Therefore, there is a great interest in the development of new analytical methods for the simultaneous determination of pharmaceuticals without the necessity of a previous separation of the sample components, besides being rapid and with low cost. To overcome these limitations, electrochemical methods such as voltammetric ones were extensively used because of simplicity, rapid response, excellent reproducibility, good stability, low cost and low detection limit [27-29].

Now a day’s carbon paste electrode was very much attracted towards the determination of biologically active molecules because of the easy preparation of modified electrode, renewability, low background current and fast response. However, Polymer modified electrodes (PMEs) have received great attention in recent years. As the polymer film which is deposited onto the surface of the electrode by electropolymerisation have good stability, reproducibility, more active sites, homogeneity and strong adherence to the electrode surface. Electropolymerisation is a good approach to immobilize polymers to prepare PMEs [30,31].

The present work describes an electropolymerisation of DLalanine on the surface of carbon paste electrode by cyclic voltammetric technique. On the basis of its different electrochemical behaviour poly (alanine) MCPE was used for the detection of electroactive molecules [32-34]. In the continuation of our study, we proposed convenient method for the selective and sensitive detection of adrenaline in the presence of acetaminophen, which has a significant attraction in biological and chemical fields.

The bare carbon paste electrode (BCPE) was prepared according to the previous report [32,34]. Surface modification of the CPE was carried out by placing 1 mM DL-alanine solution in an electrochemical cell containing 0.2 M PBS of pH 7.0 by potential scanning the electrode between the potential window –0.6 to 1.4 Vs-1 at the scan rate 50 mVs-1S for 10 cycles. After electropolymerisation the modified electrode was rinsed in double distilled water and stored in 0.2 M PBS (pH 7.0) until use.

The electropolymerisation of alanine was achieved by the formation of ultra-thin film that grew between –0.6 to 1.4 Vs-1 at the scan rate of 50 mVs-1 as shown in Figure 1. The electrochemical response of 0.1 mM adrenaline in pH 7.0 PBS at different cyclised (5, 10, 15 & 20) poly (alanine) MCPE was shown in Figure 2A. The plot of anodic peak current (Ipa) obtained for the oxidation of adrenaline versus number of polymerised cycles was plotted. The thickness of the electroactive layer directly affects the electrocatalytic activity of the fabricated electrode. As shown in the obtained results, maximum current response is obtained for 20 multiple cycles. However, a better catalytic performance was observed for the electrode which was modified by ten consecutive cycle scans. Therefore, the poly (alanine) MCPE was fabricated by considering all the above mentioned parameters. The probable electropolymerisation mechanism of alanine was described in scheme 1 (Figures 1 and 2 and Scheme 1). 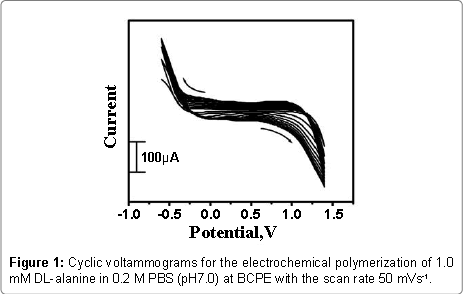 Figure 1:Cyclic voltammograms for the electrochemical polymerization of 1.0 mM DL-alanine in 0.2 M PBS (pH7.0) at BCPE with the scan rate 50 mVs-1. 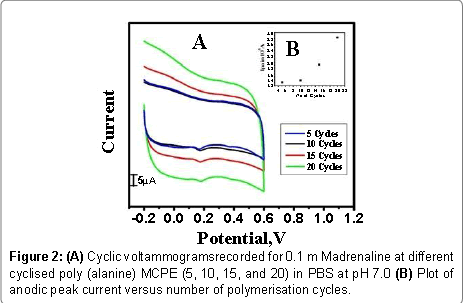 Figure 2:(A) Cyclic voltammogramsrecorded for 0.1 m Madrenaline at different cyclised poly (alanine) MCPE (5, 10, 15, and 20) in PBS at pH 7.0 (B) Plot of anodic peak current versus number of polymerisation cycles.

In order to study the performance of the poly (alanine) MCPE potassium ferrocyanide was selected as an electrochemical probe. Figure 3 shows electrochemical response of potassium ferrocyanide at BCPE (dashed line) and poly (alanine) MCPE (solid line) in 1M KCl as a supporting electrolyte at the scan rate of 50 mVs-1. A pair of redox peaks observed for BCPE and with the modified CPE. The poly (alanine) MCPE shows electrochemical property with lower the peak potential difference (ΔEp). As ΔEp is a function of electron transferrate, lower the ΔEp higher will be the electron transfer rate. The result shows a dramatic change in the voltammetric response at fabricated electrode (Figure 3) [33]. 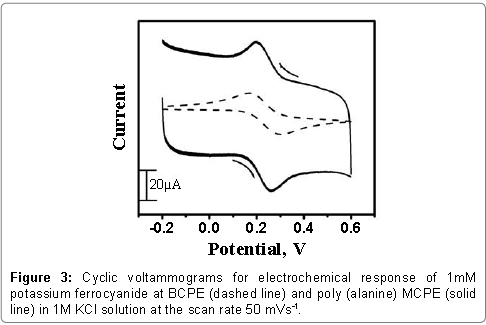 Electrochemical behaviour of adrenaline at the poly (alanine) MCPE 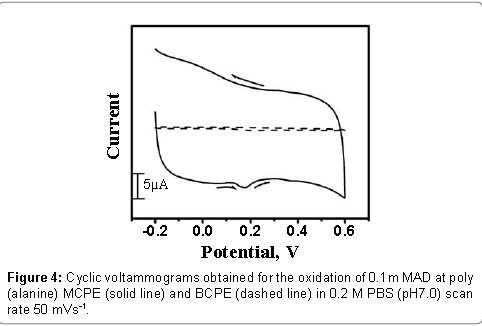 The effect of scan rate

The electrochemical response of 0.1 mM adrenaline at poly (alanine) MCPE was investigated at different scan rates from 50-300 mVs-1. The poly (alanine) MCPE showed increase in the peak currents with increase in the scan rates with a small shift in the oxidation peak potential towards more positive potential as shown in Figure 5A. This result is in accordance with Randles-Sevick’s equation, confirming the kinetic limitation of the electrochemical process. The plot of anodic peak current (Ipa) versus scan rate (υ) gives almost straight line (Figure 5) with linear regression equation of Ipa(μA)=0.3089(υVs-1)+8.836. The correlation coefficient was r2=0.9989; the result indicates the electrochemical oxidation of adrenaline on the surface of poly (alanine) MCPE was adsorption-controlled process (Figure 5) [3]. 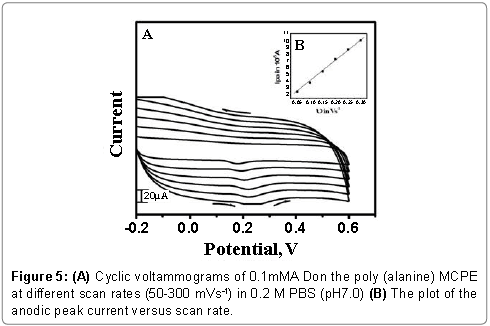 The effect of concentration on poly (alanine) MCPE

The effect of varying concentration of adrenaline was studied at poly (alanine) MCPE in 0.2 M PBS pH 7.0 at a scan rate of 50 mVs-1 as shown in the Figure 6A. It is clearly observed that, anodic peak current of adrenaline was increased as a result of increased concentration of adrenaline in the range 10 to 60 μM. The plot of Ipa versus concentration of AD shows two linearity in the graph. For the first linearity (r2=0.9977) the correlation coefficient was Ipa(μA)=24.65(Co 10-4M/L)+14.54. And for second linearity it was expressed to be (r2=0.9933) Ipa(μA)=15.4(Co 10-4M/L)+17.826. The limit of detection and limit of quantification was calculated by using equation (1) and (2).

Where S is the standard deviation and M is the slope of calibration plot. The limit of detection and limit of quantification for first linear range (a) was found to be 28.0 nM and 94.4 nM, for second linear range (b) was found to be 49.0 nM and 164.0 nM. The proposed method exhibited relatively lower detection limit as compared with the early reports as shown in Table 1 (Figure 6 and Table 1). 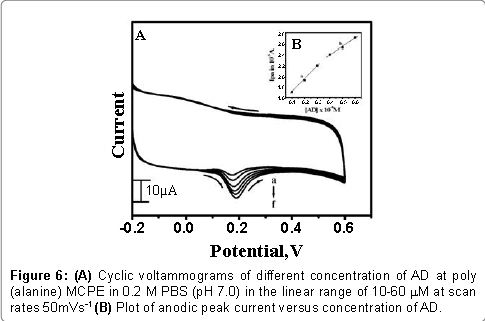 The effect of pH on the oxidation of adrenaline at poly (alanine) MCPE was investigated by varying the pH of the 0.2 M PBS. As the pH gradually increases from 5.7 to 7.0 the anodic peak potential shifts to more negative potential as shown in Figure 7A. The graph of anodic peak potential with pH of the buffer solution gives a slope value of 53.0 mV/pH. This is in accordance with the Nernst equation. Therefore the oxidation of AD at poly (alanine) MCPE surface involves the transfer of equal number of protons and electrons in the oxidation mechanism [40,41]. The oxidation mechanism of AD was depicted in scheme 2 (Figure 7 and Scheme 2). 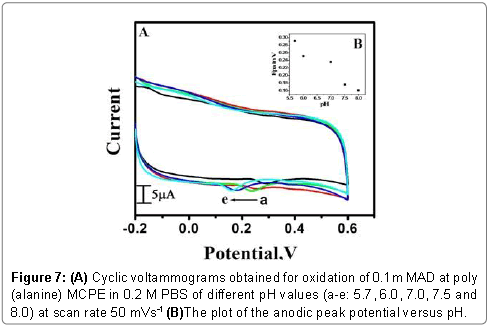 Figure 8 shows the cyclic voltammograms of simultaneous determination of 0.1 mM AD and 0.1 mM AP at pH 7.0 PBS. The voltammogram obtained for the mixture of sample at BCPE was less sensible (dotted line) the oxidation potentials of AD and AP was located at 0.226 V and 0.384 V respectively. On the other hand, at poly (alanine) MCPE (solid line) shows well-defined oxidation peaks observed at 0.174 V and 0.367 V for AD and AP respectively. The peak to peak separation was 0.193 V; this indicates that poly (alanine) MCPE act as a good electrochemical sensor for the determination of AD and AP present in the binary mixture.

The electrochemical study was conducted by varying the concentration of AD constant and varied the concentration of AP by DPV technique. After variation of AP and AD, this modified electrode is more sensitive for AD compared with AP. This result suggests the oxidation of both the analytes occurs independently and effectively at the poly (alanine) MCPE (Figures 8-10). 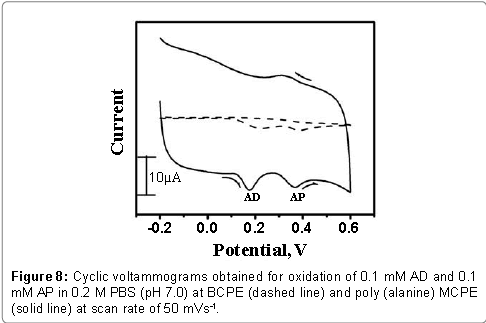 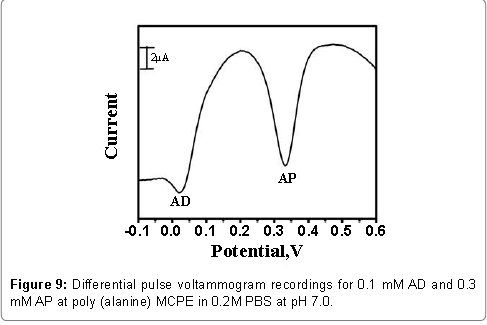 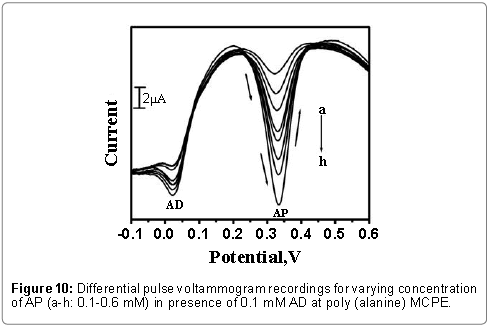 The present study demonstrates electropolymerisation of alanine on the surface of BCPE and exploring its advantages for the electrochemical determination of AD and AP. The result shows poly(alanine) MCPE not only exhibited strong electrocatalytic activity towards the oxidation of AD and AP, it also increased the selectivity of the separation. Because of its high electrocatalytic behaviour, good selectivity in separation, sensitivity in measurement, reproducibility in result with the advantage of easy preparation and convenient surface modification, the poly (alanine) MCPE was very useful in the development of sensor for the determination of neuroactive adrenaline in the presence of interfering compound acetaminophen.