Copyright: © 2015 Ubeid MF, et al. This is an open-access article distributed under the terms of the Creative Commons Attribution License, which permits unrestricted use, distribution, and reproduction in any medium, provided the original author and source are credited.

In this work, the reflected, transmitted, and loss powers due to the interaction of electromagnetic waves with graphene-dielectric structures are analyzed theoretically and numerically. The properties of the graphene material are given in detail and the required equations for its main parameters are defined. The formulations for the transverse electric waves case are provided. A recursive method is used to calculate the overall reflection and transmission coefficients of the structure. The reflected, transmitted, and loss powers are determined using these coefficients. In the numerical results, the mentioned powers are computed as a function of wavelength, angle of incidence, and dielectric thickness when graphene thickness changes.

Graphene film is a monolayer of carbon atoms packed into a dense honeycomb crystal structure that can be viewed as an individual atomic plane extracted from graphite [1,2]. Graphene has high mobility and optical transparency, in addition to flexibility, robustness and environmental stability. It is remarkably strong for its very low weight (100 times stronger than steel), and it conducts heat and electricity. Because it is virtually two-dimensional, it interacts oddly with light and with other materials [3]. While scientists had theorized about graphene for decades, it was first produced in the lab in 2004 [4]. Despite its short history, graphene has already revealed a cornucopia of new physics and potential applications [5-8]. Andre Geim and Konstantin Nevoselov at the university of Manchester won the Nobel prize in physics in 2010 “for groundbreaking experiments regarding the two-dimensional material graphene” [9].

Researches on graphene-based structures have been developed quickly in both theoretical and experimental applications. Lee et al. [10] have investigated dynamic behavior of multilayer grapheme via supersonic projectile penetration. Liu et al. [11] have shown that an enhancement of graphene absorption is observed when the graphene monolayer is placed on the top or within dielectric mirrors. Zhu et al. [12] have studied optical transmittance of multilayer graphene. Singh et al. [13] have reviewed optomechanical coupling between a multilayer graphene mechanical resonator and a superconducting microwave cavity. Khan et al. [14] have demonstrated that, the optimized mixture of graphene and multilayer graphene, produced by the high-yield inexpensive liquid-phase-exfoliation technique, can lead to an extremely strong enhancement of the cross-plane thermal conductivity of the compsite. Iorsh et al. [15] have proposed a new class of hyperbolic metamaterials for THz frequencies based on multilayer graphene structures. Min et al. [16] have shown the electronic structure of multilayer graphene. Rast et al. [17] have numerically analyzed a composite layered structure for, tunable, low-loss plasmon resonators, which consists of a noble metal thin film coated in graphene and supported on a hexagonal boron nitride substrate.

This paper is interested in transmission and reflection of electromagnetic waves by a graphene/dielectric periodic structure consisting of N periods. We consider the structure is embedded in vacuum and a monochromatic s-polarized plane electromagnetic wave is obliquely incident on it. The electric and magnetic fields are determined in each region using Maxwell’s equations. Then Snell’s law is applied and the boundary conditions are imposed at each interface to obtain the reflection and transmission coefficients. The reflected and transmitted powers of the structure are presented in terms of these coefficients. In the numerical analysis a recursive method [18,19] is used to calculate the mentioned powers as a function of wavelength, angle of incidence and the slab thickness when the graphene thickness changes. To check the results of the analysis used in these calculations, the conservation law of energy given in [20,21] is checked and it is clear that it is satisfied for all examples.

The considered waveguide structure consists of a pair of graphene (ε2, μ0) and dielectric (ε3, μ0) materials bounded by two half free spaces (ε0, μ0). The letter ε stands for permittivity of the related materials and the subscripts 2, 3 refer to region 2 and 3 and μ0 is the permeability of free space. A perpendicular polarized plane wave in region 1 is incident on the plane z = 0 at some angle θ relative to the normal to the boundary (Figure 1). 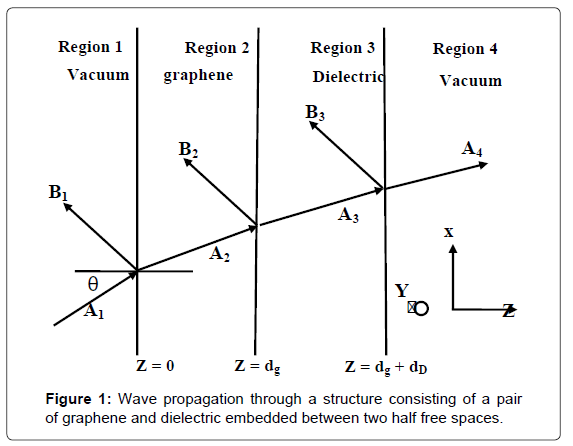 Figure 1: Wave propagation through a structure consisting of a pair of graphene and dielectric embedded between two half free spaces.

To find the corresponding magnetic field

, we start with Maxwell’s equation

is the wave number inside the material and nl is the refractive index of it. Also the subscripts x and z represent the x- and z-components of the related wave number, respectively.

Matching the boundary conditions for

fields at each layer interface, that is at z=0,

Where i, j correspond to any two adjacent media.

The reflection and transmission coefficients R and T respectively of the structure are given by [25,26]:

The reflectance R’ and transmittance T’ of the structure are given by:

Where R* and T * are the complex conjugate of R and T respectively. The law of conservation of energy is given by [20,21]:

where Ploss is the loss power due to losses in the graphene slab.

For n’-layers structure shown in Figure 2 R and T are calculated as follows [26,27]:

`Continue on the same procedure until R2 is reached which is the reflectance of the structure as a whole.

The same procedure is performed for T2 :

In this section, the reflected, transmitted and loss powers of the strucure described in Figure 2 are calculated numerically as a function of wavelength, angle of incidence and dielectric thickness for changing graphene layer thickness. We have used the graphene described in eq. (24) and Fluorite (CaF2)of refractive index 1.434 as a dielectric in each period. Three values the graphene thickness are considered [dg = .34 nm, .68 nm (2 x .34 nm), .68 nm (3 x .34 nm)]. These thicknesses are reported in [31]. The central wavelength is assumed to be λ0 = 600 nm, the thickness of Fluorite is λ0/2 and the number of periods N = 7. Regions 3, 5, 7 … given in Figure 2 are assumed to be loss-less and the permeabilities of them are equal to the permeability of free space, μ0. These materials do not affected by the magnetic field of incident radiations. Figure 3: The reflected, transmitted and loss powers as a function of wavelength. 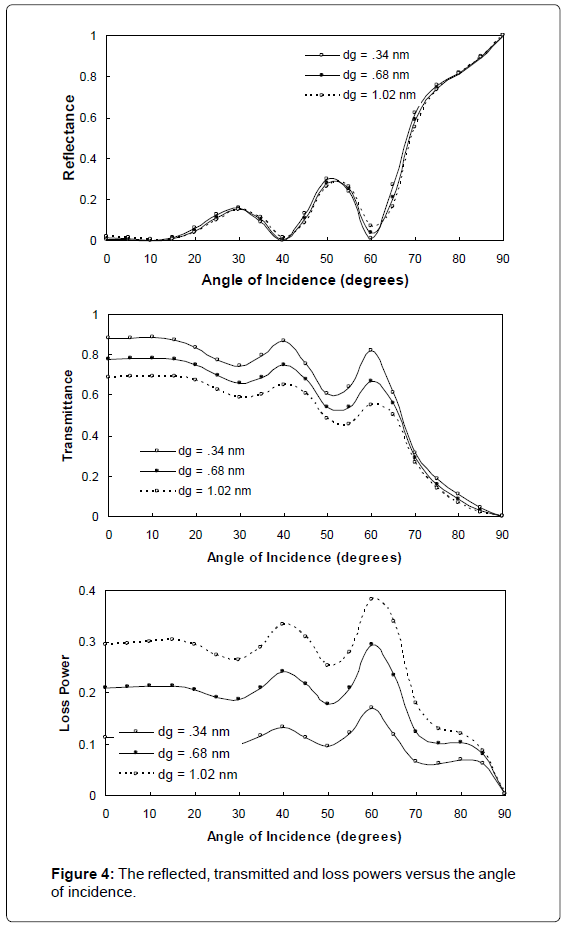 Figure 4: The reflected, transmitted and loss powers versus the angle of incidence. Figure 5: The reflected, transmitted and loss powers against dielectric thickness.

In this paper, the reflection and transmission characteristics of the electromagnetic radiation propagation through a graphene/dielectric (Fluorite-CaF2) periodic structure are studied in detail with the effect of the graphene material. The required equations for the electric and magnetic fields in each region are derived by Maxwell’s equations. Then Snell’s law is applied and the boundary conditions are imposed to calculate the reflection and transmission coefficients of the structure. Recursive method is used to solve the problem of electromagnetic wave propagation through the structure to obtain the reflected, transmitted, and loss powers. Finally, the mentioned powers as a function of wavelength, angle of incidence and the dielectric thickness etc. are studied numerically to observe the effect of the graphene on them. As it can be seen from the theoretical and the numerical results, if the grapheme thickness changes, the characteristic of the powers will be affected by this change. Numerical examples are already presented to illustrate the paper idea and to prove the validity of the obtained results. Moreover the law of conservation of energy is satisfied throughout the performed computations for all examples.

The results obtained could lead to design new devices, apparatus, components at the millimeter wave, optical, and microwave regimes. Furthermore, these results open a way to think how the availability of the graphene will change the functionality of future devices through the graphene/dielectric structure.