ISSN: 2151-6200
Arts and Social Sciences Journal
Make the best use of Scientific Research and information from our 700+ peer reviewed, Open Access Journals that operates with the help of 50,000+ Editorial Board Members and esteemed reviewers and 1000+ Scientific associations in Medical, Clinical, Pharmaceutical, Engineering, Technology and Management Fields.
Meet Inspiring Speakers and Experts at our 3000+ Global Conferenceseries Events with over 600+ Conferences, 1200+ Symposiums and 1200+ Workshops on Medical, Pharma, Engineering, Science, Technology and Business

Copyright: © 2017 Tamir A. This is an open-access article distributed under the terms of the Creative Commons Attribution License, which permits unrestricted use, distribution, and reproduction in any medium, provided the original author and source are credited.

The major objective of this article is to demonstrate artistically the concept of energy in its different forms. Energy is defined as “the capacity of a physical system to perform work” such as to move an object of a given mass by the application of force. The word energy derives from the Greek word energeia and appeared for the first time in the work of Aristotle in the 4th century BC where Gottfried Leibniz (1646-1716), German philosopher and mathematician, defined it as the product of the mass of an object and its velocity squared, namely mv2.

It was Gaspard-Gustave Coriolis (1792-1843), French mathematician, mechanical engineer and scientist, who described "kinetic energy" in 1829 in its modern form, 0.5mv2, where in 1853 the Scottish engineer and physicist William Rankine (1820-1872) coined the term "potential energy."

In the following, definitions taken from the Internet of the different kinds of energy are detailed. It should be noted that in some cases there are more than one definition for a certain kind of energy and the one selected was that which best fitted its artwork. We begin with “free energy” defined as “the amount of energy available for the system to do useful work” [1].

Figure 1 painted by the Austrian artist De Es Schwertberger (1942), shows the sun as an infinite source of available energy where the major problem is its transformation to work. “Electrical energy” defined as “the energy made available by the flow of electric charge through a conductor” is demonstrated surrealistically in Figure 2. The artwork was painted by the famous Italian Michelangelo (1475-1564) and was slightly modified by the authors to enhance the effect of electrical energy. “Magnetic energy” demonstrated in Figure 3 by two artworks are defined as “the energy required to set up a magnetic field”. The Norwegian artist Mrs. Sigrid Tune painted the artwork on the right entitled “Magnetic Energy” where the two colored circles demonstrate artistically the two edges of a magnet. Figure 3 left is by an unknown artist [2]. Figure 4 demonstrates “body energy” defined as “the amount of energy required during exercise by the body”. It is demonstrated on the right of the figure on which the image of Einstein was installed on the original image. Concerning “body energy” it is well known that body consumes food as a source of energy, and then burns it up to produce some useful work and quite a lot of heat. Also, it produces heat just for the purposes of maintaining a constant body temperature. Both of these sources of heat cause your body to radiate thermal energy, which can be detected with infrared sensors. The thermal energy is demonstrates on the left of Figure 4 by an unknown artist [3]. Heat energy (Figure 5) defined as “a form of energy that is transferred by a difference in temperature T2-T1” is demonstrated by two surrealistic artworks of Rene Magritte (1898-1967), Belgium. 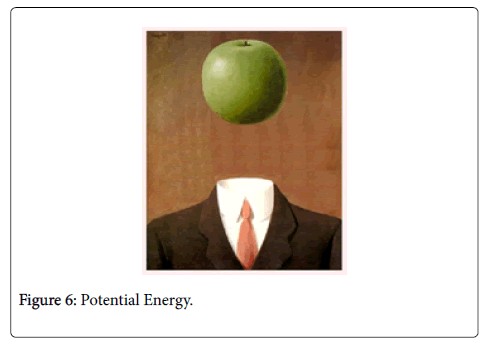 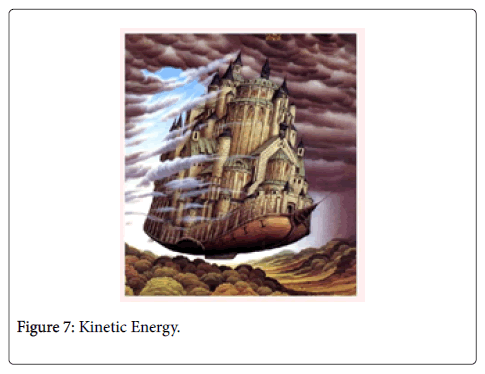 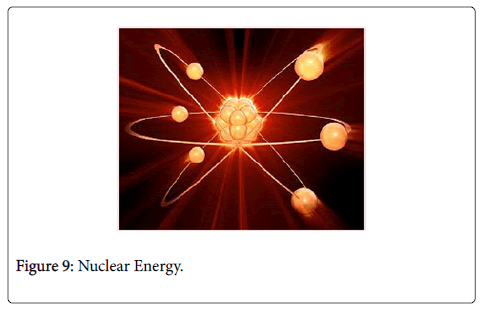 A very impressive demonstration is that of “sound energy” painted by the American illustrator Rafael Olbinski (Figure 10). It is defined as “the energy you can hear that travels in vibrating waves through the air”. “Internal energy” defined as “the energy stored in a system at the molecular level due to motions and relative positions of the molecules in the system”. It is demonstrated in Figure 11, where it is well known that the interior of human body is the store of his energy. And finally “surface energy” that is “the energy required stretching a unit change of a surface area” [1-3]. 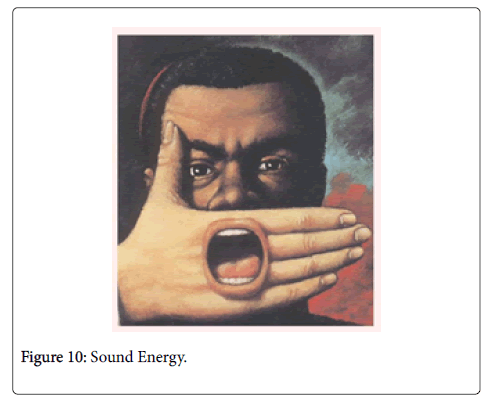 The bubble in Figure 12 photographed by Karl E. Deckat, a German photographer, demonstrates it. In conclusion the authors believe that the presentation of the different kind of energy by artworks makes them more understandable and perceptible.