Copyright: © 2016 Rajbanshi J. This is an open-access article distributed under the terms of the Creative Commons Attribution License, which permits unrestricted use, distribution, and reproduction in any medium, provided the original author and source are credited.

Accurate estimation of runoff depth and volume is an important task for proper watershed management. Rainfall generated runoff is not only dependent on the intensity, duration and the distribution of rainfall, but also soil type, vegetation, and land use types have significant effects on the runoff pattern. The present study aims to determine the runoff depth and volume using Natural Resource Conservation Service Curve Number (NRCS-CN) method. The study was carried out in Konar catchment located in Jharkhand, India. The land use/land cover map, soil map were prepared in GIS environment. The NRCS- curve number method was followed to estimate the runoff depth for selected rainfall events in the catchment. The result showed that the average volume of surface runoff from 2000 to 2009 for Konar catchment was 71510.76 m3 which represents only 6.3% of the annual average rainfall. Statistically positive correlation (R2=0.53) have found between rainfall and runoff depth. The present study reveals that NRCS-CN method with integration of GIS and remote sensing technology can effectively be used to estimate the runoff in an ungauged river catchment with similar hydrological characteristics.

Successful water resource management requires accurate knowledge of the resource available in the watershed area. It plays a vital role for economic and social development of the nations. Accurate estimation of runoff generated by rainfall is an essential as well as important task for proper watershed management such as flood control and its management, design of irrigation and drainage network, hydropower generation etc. Rainfall generated runoff is dependent on the intensity, duration and the distribution of rainfall event. Apart from the rainfall characteristics, there are certain catchment specific factors which have direct impacts on the volume of surface runoff. There are several methods available to estimate the surface runoff in an ungauged river catchment such as Artificial Neural Network (ANN), SCS Curve number model, Geomorphological Instantaneous unit hydrograph (GIUH) etc. Among these methods SCS curve number (also called Natural Resource Conservation Service Curve Number (NRCS-CN) method is widely used because of its simplicity. Conventional SCS curve number method for runoff estimation is very time consuming and error prone. Thus integration of GIS and remote sensing technology in NRCS-CN model is increasingly used. Many researchers have successfully utilized the GIS and remote sensing techniques to estimate curve number throughout the world. Gajbhiya and Mishra [1] pointed out that Remote Sensing and GIS is very reliable techniques for the preparation of most of the input data required by SCS curve number method. Ahmed and Verma [2] concluded that the remote sensing and GIS based SCS-CN can be effectively used to estimate the run-off from the river basins of similar geo-hydrological characteristics. Nayak et al. [3] found good correlation between computed runoff using SCS-CN method and observed runoff using conventional method, which shows that SCS-CN method performed well in estimating the surface runoff in the Uri Catchment (Narmada Basin, India).

The objective of the present study is to estimate the surface runoff depth using NRCS-CN method with GIS and Remote Sensing in Konar Catchment (Jharkhand, India).

The konar catchment is located at the upper Damodar Valley covering Hazaribagh and Bokaro districts of Jharkhand (India). The catchment is drained by the Konar and Siwane River which runs through a greater portion of Hazaribagh plateau. Present study area of Konar catchment extended from 23°51’ N to 85°47’E and 24° 08’N to 85° 14’E covering 934.18 sq. km and elevation varies from 420m to 900m above sea level. Topography of the Konar catchment is characterized by dissected plateau region with occasionally hill. The upland areas of the Konar catchment are mainly covered by the dense forest while the major cultivated lands are in the lower reaches. The mean annual temperature and rainfall of the region is 24°C and 1305 mm. 80% of the total rainfall occurs during monsoon season (June to September). Mainly two types of soil found in this region namely red soil and sand loamy soil. Major food crops cultivated in this region are Maize, Paddy, Wheat and various types of vegetables such as Kadu, Kohra, Bhendi, French beans etc. (Figure 1). 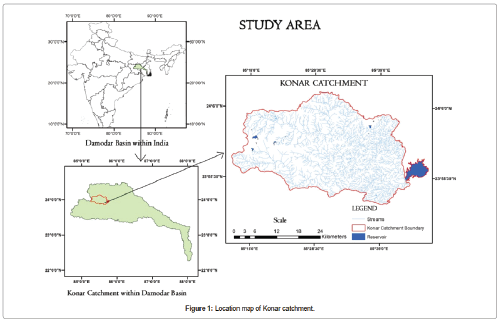 The present study is carried out using Survey of India (SOI) topographical maps of 1977, 1978,1982,1982,1983 with no. 73E/5, 73E/9, and 73E/13, 73H /8, 72H /12 on the scale of 1:50,000. The Topographical maps were geographically referenced, mosaiced and the study area was delineated in GIS environment with the help of ERDAS Imagin 9.0 assigning Universal Transverse Mercator (UTM), World Geodetic System 1984 and 45N zone projection system. The Landsat 8 images were collected from GLOVIS portal of United States Geological Survey (USGS) to create Land Use and Land Cover (LULC) map of the study area. Daily rainfall data (2000-2009) were collected from Hazaribagh Soil Conservation training Centre, DVC. Soil map prepared by National Bureau of Soil Survey on 1: 250000 scales were used for this purpose. ArcGIS 10.2 software was used to create different layers and maps. ERDAS Imagine 9.0 software was used to create LULC map of the Catchment area (Table 1).

Table 1: The hydrological soil groups and their characteristics.

The SCS curve numbers (SCS-CN) method was developed by the Soil Conservation Service for estimating runoff volume. It is widely used to estimate runoff from small to medium sized watershed. The requirements for this method are rainfall amount and curve number. The fundamental concept is that the ratio of actual retention of rainfall to the potential maximum retention (S) is equal to the ratio of direct runoff to rainfall minus initial abstraction. The rainfall-runoff equation used by the SCS for estimating depth of direct runoff from storm rainfall is:

For Indian soil condition [4] the above relation is modified as follows:

Substituting the value of Ia in the generalized runoff equation produces,

The Soil Conservation Service (SCS) expressed S as a function of curve number as:

Where CN is a dimensionless number ranging from 0-100 and S is in mm.

As defined by SCS soil scientists, Soils may be classified into four hydrologic groups

(A, B, C and D), (USDA [5]), depend on infiltration, soil classification and other characteristics.

Antecedent moisture condition (AMC) is an indicator of wetness and soil moisture availability prior to the storm which has a significant effect on runoff volume. Three types of AMC conditions were present in SCS based on rainfall magnitude of previous five days and season. Different types of AMC are given in Table 2.

The runoff curve number is empirical parameters which are used to predict the direct runoff. It ranges from 0 to 100. A Lower value indicates the low runoff potential while the higher value indicates the high runoff potential. The runoff curve number is based on the area’s hydrologic soil group, land use / land cover, and hydrological condition. In this paper, CN is taken from different published literature by USDA and other researchers [6]. To convert the CN value in different antecedent moisture condition, a conversion table published by Mishra has been used in this paper. Area weighted composite curve number for different land use and hydrological soil condition is computed using the following equation [5].

Land Use and Land Cover (LULC)

Eight LULC classes were categorized in the catchment as given in the Table 3. The LULC map of Konar Catchment is shown in Figure 2. 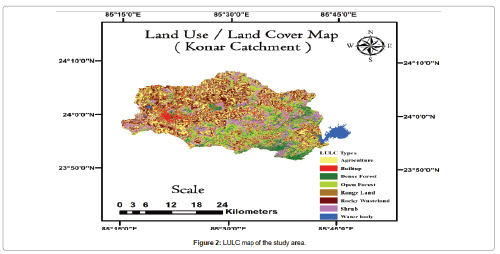 Total 38 soil samples have been collected from the field to analyze the soil texture of the study area. Soil map prepared by National Bureau of Soil Survey of the Konar Catchment was rectified and the boundary of each soil type was digitized in ArcGIS 10.2. According to soil texture analysis result, the soils of Konar Catchment are mainly Silt loam, Sandy loam, Clay loam and Loamy types. On the basis of the soil texture, the corresponding hydrological group was assigned to each soil types of the study area. The soil of the study area comes under the hydrological soil group A and B. Hydrological soil map of the Konar catchment is shown in Figure 3 and Table 4. 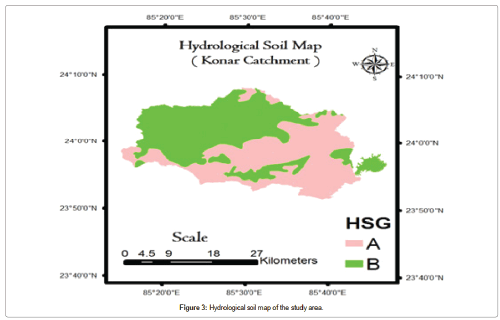 The NRSC-CN model with integrated remote sensing and GIS methodology has successfully applied for the estimation of runoff depth and volume in Konar catchment. Based on the result of the soil analysis, land use and land cover, the study area has divided into two hydrological soil groups. The composite curve number for the normal condition is 59 whereas for wet and dry conditions are 77 and 39. The average volume of surface runoff of the Konar Catchment is 71510.76 m3 which represents only 6.31% of the annual average rainfall. The positive correlation is found between rainfall and runoff (R=0.53). The result could not be compared to the measured runoff value due to the lack of daily runoff data from the catchment.