Copyright: ©2015 Hanafy MS, et al. This is an open-access article distributed under the terms of the Creative Commons Attribution License; which permits unrestricted use; distribution; and reproduction in any medium; provided the original author and source are credited.

This study was performed to evaluate the usefulness of bone tracer 99mTC-MDP in detecting renal disorders by imaging of renal cortex for patients with cortical defect and estimation of split renal function (SRF) as compared with renal cortical imaging agent 99mTC-DMSA. In this study 23 patients (6 males, 17 females) with range age of 16y -75y (mean 45.6y ± 17.4y), and a total of 46 studies (using both 99mTC-DMSA and 99mTC-MDP per patient for left and right kidneys) were performed for detecting renal disorders. Both studies were performed within 48 hours between each other. SRF was calculated in all cases from renal uptake of the tracers into the region of interest by using computer acquired data of gamma camera. For detecting renal cortex abnormalities, all cortical scars and defects scars seen on 99mTc-DMSA scan were also detected by 99mTc-MDP.

The results showed that the non visualized kidney on 99mTC-DMSA scan was also non visualized on 99mTC-MDP. Also, there was a high correlation between SRF values obtained from 99mTC-MDP and 99mTC-DMSA, where (p>0.01, r= 0.93 for left kidney and r=0.0.92 for right kidney).

The similar SRF values of 99mTC-MDP and 99mTC-DMSA allow to use of 99mTC-MDP tracers for detecting both of bone and renal abnormalities.

Estimation of split renal function is a particularly important role of renal scintigraphy [1] and one of the major contributions of radionuclide renal studies to the practice of urology [2]. Functional and morphologic investigations with radionuclide studies play a prominent role in the diagnosis and follow-up of various renal disorders [3-7]. 99mTc- DMSA is slowly cleared from the blood and concentrates in the renal cortex; 42 % of the injected dose remains in the renal cortex at 6 hours [8]. DMSA is an excellent agent for detecting focal abnormalities of the renal cortex. Because of its high kidney uptake, it has been suggested that 99mTc-DMSA may be the best technetium agent for determining the relative functional renal mass. Technetium-99m dimercaptosuccinic acid (99mTC-DMSA) was introduced in 1974 and is still the agent of choice for static renal scintigraphy [9,10], and 99mTC MDP(methylene diphosphate) labeled phosphate complexes were first introduced in 1971 as a major advance in skeletal image. Bone scintigraphy, so far, is still a useful examination for the clinical diagnosis, especially in evaluating and following up the status of cancer patients with suspicious bony metastasis. Many authors [10-14] found that there are a number of renal disorders detected while doing bone scintigraphy because 99mTC-MDP (is excreted through the kidneys to provide adequate visualization of the urinary tract. Furthermore, damage to the kidney is caused by chemotherapy and/ or radiation therapy when the kidneys are included in the radiation field [15]. Kirkinen [16] and other investigators [17] indicated that further that urethral obstruction from radiation therapy might occur as early as three weeks or as late several years after therapy, it was potentially curable. Therefore, the estimation of renal function as well as the detection of bone metastases is useful in patients that received radiation therapy for detecting undermine renal disorders, and prevent those with high risk of renal abnormalities from going to irreversible stage.

A total of 46 studies for 23 patients (within ages ranged from 16 years-75years old) were performed between 2014 and 2015, in Nuclear Medicine division–Radiology department at Zagazig University Hospital, (Egypt). Because of various renal disorders and for routine indications, such as evaluation of renal cortex after urinary tract infection,the split renal function assessment (SRFs) were calculated using both 99mTc-MDP and 99mTc-DMSA renal scintigraphy. All studies were performed using both radionuclides for each patient to evaluate the usefulness of bone seeking radiopharmaceutical in detecting renal abnormalities as compared with renal cortical agent. All radionuclide studies were carried out using a Dual-headed gamma camera equipped with a low-energy, high-resolution parallel-hole collimator (GE Healthcare Unveils Discovery NM 630 SPECT). During imaging, the collimator was set as close as possible to the patient’s table.

There is no preparation for patients during a DMSA Scan, they can eat and drink normally. The radiopharmaceutical was prepared according to the manufacturer's instruction with the kit. Patients were injected with activity 5.0 mci of the radiopharmaceutical followed by infusion of 20 ml of normal saline. After 2-3 hours intravenous injection, 99mTc-DMSA static images were acquired in 256 x 256 matrix with the patients in a supine position that appears the best position to minimize renal depth difference, thus improving the accuracy of split renal function measurement and with gamma camera’s detectors placed in a posterior and anterior views (250 kcounts/view or 5 minutes/view). SRFs were calculated, semi-automatically, by the geometrical mean of the anterior and posterior images, using GE Xeleris software.

99mTc-MDP Static images were performed on another day, for comparison with 99mTc-DMSA Static images for the same patients. Data collection and analysis were repeated under the same conditions, and SRFs for all patients were calculated by the same method.

Using the posterior and anterior digital images, regions of interest are placed around both kidneys and below both kidneys for background subtraction. Then, the background corrected counts in each kidney and the percent of total counts (DMSA uptake) in each kidney are calculated. Cross-correlation coefficients were calculated by Pearson correlation for comparison of repeated measurements of SRF for both kidneys using both radiopharmaceuticals. Statistical analysis was performed using the SPSS 14.0 software program.

SRFs measured by 99mTC-MDP and 99mTc-DMSA renal scintigraphy are shown in Table 1. In this study, there are 9 patients had normal SRF (45%-55%) as shown in Figure 1, and 14 patients had abnormal SRF, and non visualized kidneys on 99mTc-DMSA scan were also non visualized on 99mTc-MDP. For detecting renal cortex abnormalities, all cortical scars and defects scars seen on 99mTc-DMSA scan were also detected by 99mTc-MDP as shown in Figures 2-4. In correlation analysis, there was a high correlation between the SRF obtained from the 99mTc-DMSA and 99mTC-MDP for both left and right kidneys (p>0.01 and r=0.93, r=0.92 left and right kidney, respectively) as shown in Figures 5 and 6. 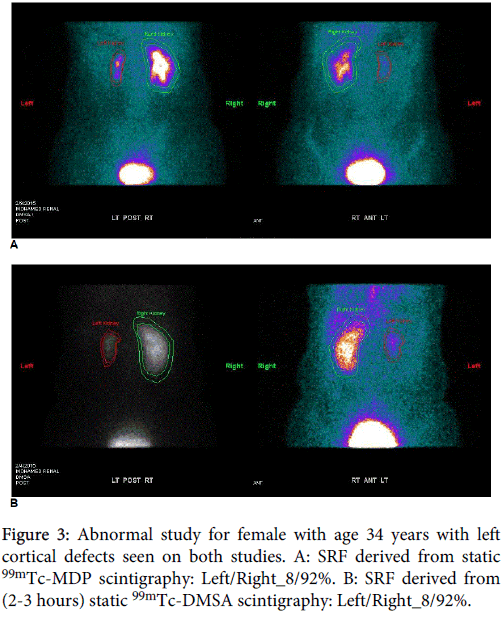 99mTc-DMSA scanning has been regarded as the best method for assessing SRF because the radiotracer is retained [18], primarily in the proximal convoluted tubules, for a sufficiently long time to allow static imaging of tubular activity which can be performed over several minutes [19]. It is well known that information about renal abnormalities can be obtained from bone scintigraphy because 99mTC-MDP is excreted through the kidneys to provide adequate visualization of the urinary tract [20]. These abnormalities have included absent renal activity, small or displaced kidneys, urinary obstruction, focal renal parenchymal abnormalities, unilateral decrease in renal function, and asymmetric uptake [10-14]. In addition, detailed views of bladder can be obtained. Based on the data of animal and human studies, 99mTC-MDP, unlike chelates (e.g. 99mTC-DTPA) which are handled byglomerular filtration [20,21], is probably excreted as simple phosphates by renal tubular [22]. Thus, accompany with sufficient excretory amount of MDP, it provides excellent images on kidney at the time of bone scanning, So 99mTC-MDP and 99mTC-DMSA examinations should be performed on different days.

Technetium-99m DMSA scintigraphy is the gold standard for evaluation of Split renal function (SRF) [23-25]. 99mTc-dimercaptosuccinicacid (99mTc-DMSA) is an agent that is actively taken up by the proximal and distal renal tubular cells, directly from per tubular vessels, not secreted to the tubular lumen [26] and accumulates in the renal cortex [27]. This modality is primarily used for imaging functioning cortical mass and individual renal function [28] since the abnormal kidney function was set at <45% for one kidney [29]. It is the most reliable method for assessing chronic cortical scarring [19]. In the 99mTc-DMSA studies, SRF is calculated using the geometric mean and taking kidney depth into account by acquiring images, interiorly and posteriorly. TC-99m MDP is currently recognized as the most common radiopharmaceutical tool in detecting skeletal metastasis. After injection, the agent shows a biexponential type of blood clearance. The exponent I represents bone uptake and the exponent II, mainly is the renal excretion. It is generally agreed that the cumulative renal excretion up to 3 hours ranged between 30-50% [21,23,30]. So, by high resolution gamma cameras, we can visualize excellent renal image and dynamic derangement of urinary excretion at the time of bone scanning [20]. Park [20] and Vieras [31] showed that the detection rate for renal abnormality was 97.4%. Wen-sheng state that 99mTc-MDP used in detecting renal abnormalities may improve the selection of patients for excretory urolography, and prevent those with high risk of renal abnormalities from going to irreversible stage. In another study compared with 99mTc-MDP and 99mTc-DTPA scintigraphy for assessment renal function, the author state that the feasibility of the assessment of renal function with 99mTc-MDP was confirmed in patients without remarkable skeletal abnormality. It can be performed incidental to bone scintigraphy and is expected to provide useful information in monitoring renal function. Miyazaki [27] found that SRF derived from the 99mTc-DTPA scintigraphy showed a good correlation with results obtained from the 99mTc-DMSA scan. They found the mean SRF value of the 99mTc-DTPA scintigraphy to be 2% different than that of the 99mTc- DMSA. In this study there was a high correlation between the SRF obtained from the 99mTc- DMSA and 99mTC-MDP or both left and right kidneys.

Funding: This study was funded by the authors.

There is no any conflict interest among the authors.

All procedures performed in studies involving human participants were in accordance with the ethical standards of the national research committee and with the 1964 Helsinki declaration and its later amendments or comparable ethical standards.

Informed consent was obtained from all individual participants included in this study.