Tellurium has gained significant attention due to its photoconductivity, piezoelectricity, and thermo conductivity properties. The aim of this study was to evaluate the effect of biofield energy treatment on thermal, physical and atomic properties of tellurium powder. The tellurium powder was equally divided in two parts: control and treated (T). The treated part was subjected to Mr. Trivedi’s biofield energy treatment, whereas the control part was remained untreated. Subsequently, the control and treated samples were characterized using differential scanning calorimetry (DSC), thermogravimetric analysis (TGA), X-ray diffraction (XRD), and Fourier transform infrared (FT-IR) spectroscopy. The DSC data showed that latent heat of fusion was decreased by 14.13, 21.90, and 5.55% in treated samples T1, T2, and T3, respectively as compared to the control. However, the melting temperature did not show any change in treated samples as compared to the control. The TGA data showed that the peak width (difference in onset and endset) was increased from 213.67°C (control) to 234.82°C in treated tellurium sample. Besides, XRD results exhibited an alteration in lattice parameter, unit cell volume, density, atomic weight and nuclear charge volume of the treated tellurium powder as compared to the control. In addition, the crystallite sizes were significantly changed on crystalline plane (102) and (110) as 146.05→48.67 nm and 63.01→88.21 nm, respectively in the treated tellurium. The FT-IR spectra did not show any significant change in absorption frequencies in treated sample as compared to the control. Therefore, DSC, TGA and XRD data suggested that Mr. Trivedi’s biofield energy treatment has significantly altered the thermal and physical properties of tellurium powder. Thus, biofield energy treatment could be applied to modulate the thermal and physical properties in semiconductor and chalcogenide glass industries.

Tellurium (Te), chemically related to selenium and sulfur, is a rare, brittle and silver white metalloid. Tellurium and its related materials have attracted significant attention due to its photoconductivity, piezoelectricity, thermo conductivity and catalytic activities in organic reactions [1-3]. Commercially, it is used in several alloys such as steel and copper to enhance the machinability property. The considerable fraction of tellurium is used in cadmium telluride (CdTe) solar panels and as a semiconductor in various electronics industries [4]. For semiconductor applications, the orientations and size of crystallites play the vital role [5]. Furthermore, tellurium is widely used in the infrared detectors, optical modulators, fluorescent, gas sensor and chalcogenide glasses [6]. In these applications, its thermal properties such as melting point, latent heat of fusion, and thermal conductivities are the important parameters, which control the overall efficiency of the product [7]. Currently, the thermal properties are modulated by using different pressure based techniques, which are studied by various researchers [8,9]. Thus, after considering the importance of crystal structure parameters and thermal properties in industrial application, it is important to use an approach which can modify physical and thermal properties of tellurium.

The generation of bioelectricity in heart and brain functions due to the motion of charged particles such as protons, electrons, and ions in the human body is well known [10,11]. Recently, it is reported that the various scientific instruments such as Kirlian photography, polycontrast interference photography (PIP) and resonance field imaging (RFI) can measure the biofield of human body [12]. Furthermore, a human has the ability to harness the energy from environment/Universe and can transmit it to any object (living or non-living) around the Globe. The object(s) always receive the energy and respond in a useful way that is called biofield energy, and this process is known as biofield energy treatment. Moreover, the National center for complementary and alternative medicine (NCCAM) has recommended the uses of alternative CAM therapies (energy-healing) in the healthcare sector [13]. Furthermore, Mr. Trivedi’s unique biofield treatment (The Trivedi Effect®) is known to alter the atomic, physical, structural and thermal characteristics of various metals [14-16] and ceramics [17-19]. Biofield treatment has significantly altered the latent heat of fusion in cadmium powder [20]. Recently, our group reported that biofield treatment has reduced the crystallite size by 28.6% in magnesium powder [21] and altered the bond length of Ti-O in BaTiO3 [22]. The present work was undertaken to evaluate the impact of Mr. Trivedi’s biofield energy treatment on thermal and physical properties of tellurium powder, using differential scanning calorimetry (DSC), thermogravimetric analysis (TGA), X-ray diffraction (XRD), and Fourier transform infrared (FT-IR) spectroscopy.

Tellurium powder was procured from Alfa Aesar, India. The sample was divided into two parts referred as control and treated. The control part remained as untreated. The treated part subjected to Mr. Trivedi for biofield energy treatment.

The treated samples were handed over to Mr. Trivedi for biofield energy treatment under standard laboratory conditions. Mr. Trivedi provided the biofield treatment through his energy transmission process, which includes bioenergy emission treated sample without touching. After treatment, sample was handed over in the same condition and stored at standard conditions as per the standard experimental protocol. An optimum precautionary measure was taken while evaluating the antibiogram analysis throughout the experiments. The differences in parameters before and after the treatment were noted and compared [23]. Subsequently, the control and treated samples were characterized using DSC, TGA, XRD, and FT-IR.

The thermal analysis of tellurium powder was performed using DSC and TGA-DTG techniques. For DSC study, Pyris-6 Perkin Elmer, with a heating rate of 10ºC/min under air atmosphere was used. The melting point and latent heat of fusion (ΔH) of control and treated tellurium sample were recorded from respective DSC thermogram. The percent change in melting point was computed using following equation:

Where, T Control and T Treated are the melting point of control and treated samples, respectively. Similarly, the percent change in ΔH was calculated.

Furthermore, TGA analysis was carried out using Mettler Toledo TGA-DTG system. The samples were heated from room temperature to 900ºC with a heating rate of 10ºC/min under air atmosphere.

The crystallite size (G) was calculated by using Scherer’s equation:

FT-IR spectra were recorded on Shimadzu’s Fourier transform infrared spectrometer (Japan) with frequency range of 4000-500 cm-1. The analysis was accomplished to evaluate the effect of biofield treatment on dipole moment, force constant and bond strength. 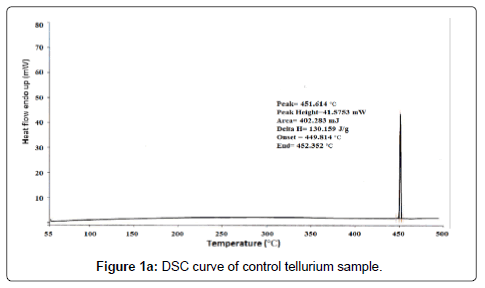 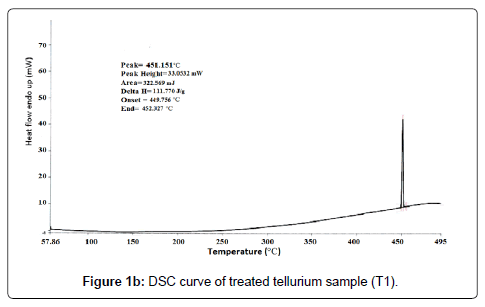 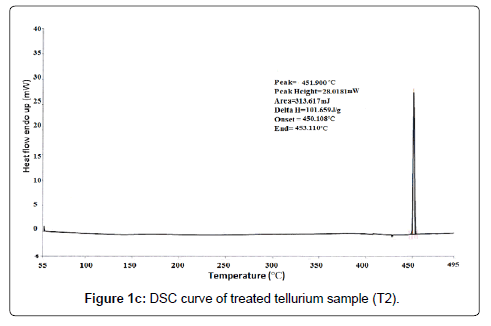 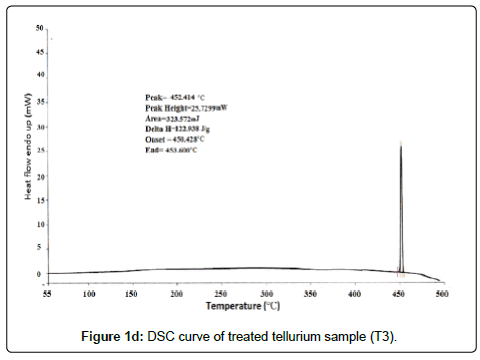 XRD is a non-destructive and quantitative technique, which has been extensively used to determine several crystal structure parameters such as crystallite size, lattice parameter etc. The XRD diffractograms of control and treated tellurium samples are presented in Figure 2. The control sample showed the crystalline peaks at Bragg’s angle (2θ) equal to 23.05º, 27.55º, 38.33º, 40.45º, 43.32º, 45.88º, 47.04º, 49.69º, 56.87º, 63.75º, and 65.9º, which can be attributed to crystalline plane (100), (101), (102), (110), (111), (003), (200), (201), (202), (113), and (210) respectively [28]. Further, the treated sample showed intense peaks at 2θ equal to 23.02º, 27.57º, 38.27º, 40.43º, 43.36º, 45.92º, 47.01º, 49.65º, 56.88 º, 63.74º, and 65.96º (Table 3). The data exhibited that 2θ values of treated tellurium sample were almost similar to the control. Furthermore, the crystallite sizes corresponding to all crystalline planes were calculated using Scherrer equation and presented in Table 1. The crystallite sizes corresponding to crystalline plane (100), (101), (003), and (113) were 60.33, 71.01, 49.94, and 54.18 nm, respectively in both control and treated samples. However, the crystallite sizes of treated tellurium sample were significantly altered on the crystalline plane (102), (110), (111), (200), (201), (202), and (210) as 146.05→48.67 nm, 63.01→88.21 nm, 40.48→26.20 nm, 90.29→225.69 nm, 41.47→50.68 nm, 52.31→94.17 nm, and 54.84→44.88 nm, respectively after biofield treatment. This indicated that crystallite sizes were increased on plane (110), (200), (201), and (202). However, the crystallite sizes were reduced along plane (102), (111), and (210). It was reported that the structure disorder and temperature affects the crystallite sizes of the compound [29]. Thus, it is possible that biofield energy can alter the arrangement of atoms in treated tellurium powder, which may lead to alter the crystallite size. Additionally, the XRD data of control and treated samples were analyzed using PowderX software to compute the lattice parameter and volume of unit cell. The results of XRD analysis are illustrated in Table 4. The data showed that the lattice parameter and unit cell volume of treated tellurium powder were slightly increased by 0.08 and 0.16%, respectively, as compared to the control. The increase in unit cell volume led to reduce the density and nuclear charge per unit volume by 0.16 and 0.24%, respectively in treated sample as compared to the control. Contrarily, the atomic weight of treated sample was slightly increased by 0.15% as compared to the control. Moreover, the increase in lattice parameter and unit cell volume suggests that tensile stress may have been applied on the unit cell of tellurium. It is assumed that the energy transferred through the biofield treatment might induce the tensile stress on the tellurium atoms, which causes them to move a little further apart. Due to this, the interatomic attraction in tellurium powder may decrease after biofield treatment. Additionally, this assumption was also supported by the decrease in latent heat of fusion in treated tellurium after biofield treatment. Therefore, XRD and DSC data revealed that biofield energy treatment has an impact on the thermal physical, and atomic properties of tellurium powder. Based on the alteration in thermal and physical properties, it is speculated that biofield energy treated tellurium powder could be more useful in semiconductor and chalcogenide glass industries. 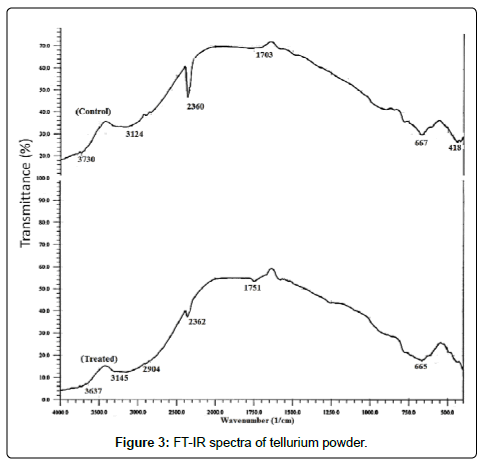 Authors thank Dr. Cheng Dong of NLSC, Institute of Physics, and Chinese academy of sciences for permitting us to use Powder-X software for analyzing XRD results. The authors would also like to thanks Trivedi Science, Trivedi Master Wellness and Trivedi Testimonials for their support during the work.