The importance of selenium (Se) in human is well established, and its deficiency has caused serious diseases such as cancer and heart disease [1]. Around 25 selenoproteins contain selenium as important element, which are commonly known as selenocysteine [2]. In addition, research on selenium has gained significant attention due to its important role in antioxidant selenoproteins for protection against oxidative stress initiated by excess reactive nitrogen species (RNS) and reactive oxygen species (ROS) [1]. In selenocysteins, selenium metal functions as redox centre in various processes, which includes the reduction of nucleotides in DNA synthesis through selenoenzyme and thioredoxin reductase; and production of active thyroid hormone pre-cursor from selenium-dependent iodothyronine deiodinases [3]. Furthermore, the bioavailability of selenium plays a crucial role in its anticancer and antioxidant activities. It is reported that the particles with crystallite size of nanometre range exhibit better bioavailability and low toxicity as compared to particles with large crystallite size [4-6]. After considering the vast importance of selenium as nutrient in human body, authors wish to investigate an economically safe approach that could be beneficial to modify the physical and thermal properties of selenium powder.

It is well established that all atoms are in motion, which contain significant amount of energy. This energy exists in the form of translational, rotation or vibrational, which is evident from vibrational spectroscopy. Similarly, cells of human body consist of various vibratory particles including electron, proton, ions etc. Further, due to vibrations of these particles, electromagnetic radiation emitted and that form an electromagnetic field around the body, known as biofield [7]. Thus, a human has the ability to harness the energy from the environment/universe and can transmit it to any object (living or nonliving) around the Globe. The object(s) always receive the energy and responded it into useful way that is called biofield energy. This energy healing process is termed as biofield treatment. The National Center for Complementary and Alternative Medicine (NCCAM) considered this biofield treatment (therapy) in subcategory of energy therapies [8]. Mr. Trivedi’s unique biofield energy is also known as The Trivedi Effect®. Mr. Trivedi’s biofield energy treatment is known to alter the physical, structural and atomic level in various metals [9-11] and ceramics [12,13] in material science. In addition to that, impact of biofield treatment has been significantly studied in the field of microbiology research [14], biotechnology research [15], and agriculture research [16]. Recently, it was reported that biofield treatment had enhanced the crystallite size by two fold in zinc powder [17]. In addition, biofield treatment has significantly altered the crystallite size, unit cell parameter, surface area of magnesium, which is an important micronutrient for human body [18]. Based on the outstanding result achieved with biofield treatment on metals and ceramics, an attempt was made to evaluate the effect of biofield treatment on physical and thermal properties of selenium powder using X-ray diffraction (XRD), Differential Scanning Calorimetry (DSC), Thermogravimetric analysis - differential thermal analysis (TGA-DTA), and Fourier transform infrared spectroscopy (FT-IR).

The selenium powder was purchased from Alpha Aesar, Hyderabad, India. The sample was equally divided into two parts, considered as control and treatment. Control parts remained as untreated, whereas treatment group was in sealed pack and handed over to Mr. Trivedi for biofield treatment under laboratory condition. Mr. Trivedi provided the biofield treatment through his energy transmission process to the treated group without touching. The control and treated samples were characterized using XRD, DSC, TGA-DTA, and FT-IR spectroscopy.

XRD analysis of control and treated selenium powder was carried out on Phillips, Holland PW 1710 X-ray diffractometer system, which had a copper anode with nickel filter. The radiation of wavelength used by the XRD system was 1.54056 Å. The data obtained from the XRD system were in the form of a chart of 2θ vs. intensity and a detailed table containing peak intensity counts, d value (Å), peak width (θ°), relative intensity (%) etc. Additionally, PowderX software was used to calculate the lattice parameter and unit cell volume of selenium powder samples. Total nuclear charge was calculated as the number of protons multiplied by charge on a proton (1.6 × 10-19 C). Nuclear charge per unit volume was computed as follow:

Here, λ is the wavelength of radiation used, b is full width half maximum (FWHM) and k is the equipment constant (0.94). Furthermore, the percent change in the lattice parameter was calculated using following equation:

Where AControl and ATreated are the lattice parameter of treated and control samples, respectively. Similarly, the percent change in all other parameters such as unit cell volume, density, atomic weight, nuclear charge per unit volume and crystallite size were calculated.

Thermal analysis of control and treated selenium powder were performed using TGA-DTA and DSC. For DSC analysis, a Pyris-6 Perkin Elmer DSC at a heating rate of 10ºC/min under air atmosphere was used. Predetermined amount of sample was kept in an aluminum pan and closed with a lid. A blank aluminum pan was used as a reference. From DSC melting point and latent heat of fusion were recorded. For TGA-DTA analysis, Mettler Toledo simultaneous TGA and Differential thermal analyser (DTA) was used. The samples were heated from room temperature to 400ºC with a heating rate of 5ºC/ min under air atmosphere. From TGA curve, percent weight loss was noted. The melting point and latent heat of fusion of control and treated selenium were recorded from DTA curve. The percent change in melting point was computed using following equations:

Where, TControl and TTreated is the melting point of control and treated samples, respectively. Similarly, the percent change in the latent heat of fusion was computed.

FT-IR spectroscopic analysis was carried out to evaluate the impact of biofield treatment at atomic and molecular level like bond strength, stability, and rigidity of structure etc. FT-IR analysis of control and treated selenium samples were performed on Shimadzu, Fourier transform infrared (FT-IR) spectrometer with frequency range of 300- 4000 cm-1.

Table 3: TGA-DTA analysis of control and treated of selenium powder. 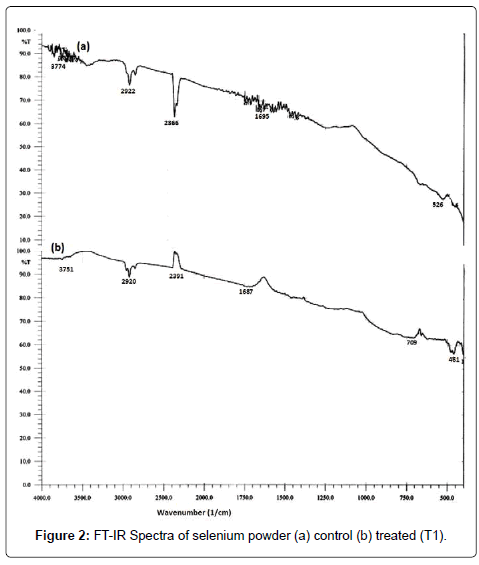 Authors gratefully acknowledged to Dr. Cheng Dong of NLSC, Institute of Physics, and Chinese academy of Sciences for providing the facilities to use PowderX software for analyzing XRD data. Authors also would like to thank Trivedi science, Trivedi master wellness and Trivedi testimonials for their support during the work.