Copyright: © 2016 Wang Y, et al. This is an open-access article distributed under the terms of the Creative Commons Attribution License, which permits unrestricted use, distribution, and reproduction in any medium, provided the original author and source are credited.

Objective: To evaluate the progression of Ossification of Ligamentum Flavum (OLF) in the thoracic spine based on cross-sectional Computed Tomography (CT) comparisons.

Method: OLF in spinal segments that did not require surgery because there were no cord compression of 17 patients who underwent laminectomies for treating symptomatic OLF were retrospectively reviewed (mean follow-up 6.3 years). Initial (preoperative or postoperative but before discharge) and final follow-up canal area unoccupied ratio (CAUR) of no-operated OLF were compared to evaluate the progression of OLF. Factors influencing OLF progression were also analyzed. Two-year follow-up and final follow-up results were assessed to evaluate the influence of OLF progression on long-term outcomes.

Result: Sixty OLF levels were compared between initial and final follow-up CT. The final follow up CAUR was significant lower than the initial in all OLF levels. Repeated measurement was used to reduce the effect of measurement error, and progression of OLF affected approximately 60% of patients and 33% of OLF segments, with annual growth rate in OLF area of 1.61%. CT mature/immature classification was an independent risk factor for the development of OLF. No patient exhibited neurological deterioration due to OLF progression.

Conclusion: Thoracic OLF that are not operated on still progress, and OLF classified as immature ossification on CT develop more significantly. Additionally, progression of OLF is not associated with neurologic regression in 5- 9 years follow-up, thus preventive laminectomy is unnecessary for OLF segments that do not compress the spinal cord.

Thoracic spinal stenosis is mainly caused by ossification of the ligamentum flavum (OLF), ossification of the posterior longitudinal ligamentum (OPLL), and thoracic disk herniation [1-7]. Thoracic myelopathy induced by OPLL and OLF has been reported frequently in the Asian population [4,6,7]. Most studies of OPLL and OLF focus on the surgical technique and predictive factors of surgical outcomes [3,5,8,9], but the natural history of ossification of spinal ligaments is poorly understood. Progression of OPLL after decompressive surgery has been reported in a few studies [10-14], but a reasonable method to evaluate the growth of OLF, and evidence regarding whether OLF that do not compress the spinal cord should be scheduled or not for posterior surgery by laminectomy, are lacking. In this study we examined the computed tomography (CT) scans of non-operated thoracic OLF and evaluate the growth of OLF using a two-dimensional method. The potential influence of OLF progression on lower limb function was also assessed to provide clinical evidence for the extent of decompression.

Between January 2005 and December 2009, OLF in spinal segments that did not require surgery because there was no cord compression of 42 patients who underwent laminectomies for multiple (≥3) symptomatic thoracic OLF were included; patients with OPLL, thoracic disk herniation, diffuse idiopathic skeletal hyperostosis (DISH), ankylosing spondylitis (AS), skeletal fluorosis, Kashin–Beck disease, and spine deformity were excluded. Figure 3: Canal area was measured by Lasso Tool in Photoshop. (a) Developmental canal area. (b) AB was used to ascertain the boundary line to draw the unoccupied canal area. Canal area unoccupied ratio (CAUR) = area in b/area in a. Continuous variables were described as means and standard deviations or ranges. Comparison between the initial and final followup CAUR was done by using paired t test. Student’s t test and χ2 test were used to evaluate the differences in the progression between mature ossification and immature ossification. Spearman rank correlation analysis was used to compare two sets of variables, such as increasing in Cobb angle and OLF progression. Binary logistic regression analysis was used to identify the relationship between OLF progression and variable factors. Consistency of repeat measurement was evaluated by test-retest reliability. P<0.05 was considered as statistically significant. The software application used for the analysis was SPSS 18.0. 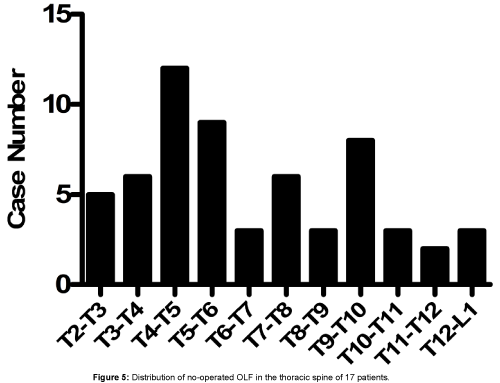 The final CAUR values were reduced in all OLF and were significantly lower than the initial values using paired t test (P<0.05) (Table 1). The progression of OLF was more significant in immature than in mature ossification, evaluated by the difference of CAUR between the initial and final follow-up results using Student’s t test (Table 2).

Table 1: Comparison of CAUR between the initial and final follow-up.

Table 2: Progression of CAUR in CT mature and immature ossification.

Initial and final CAUR of 15 OLF segments were randomly selected for repeated measurement, and strong test-retest intraclasscorrelations were observed (Pearson r=0.993, P<0.05). The average deviation of CAUR in repeated measurements was 0.0120 ± 0.0038 (n=30). We defined the difference value of CAUR> 0.04 between the initial and final follow-up, which was three times of the measurement deviation, as the evaluation standard for OLF progression. The results showed that 20 OLF developed in 10 cases, and the mean annual growth rate of area was 0.0161.

Using the evaluation standard defined as a difference value of CAUR >0.04, a binary logistic regression analysis revealed that CT mature/immature classification was an independent risk factor for the development of OLF (P<0.05), while Sato classification, followup period, OLF segment, and adjacent levels classification were not (P>0.05) (Table 3).

The mean JOA score was 6.82 ± 1.81 before surgery, 8.58 ± 1.62 at 2 years’ follow-up and 8.53 ± 1.62 at the final follow-up visit. The lower limb motor function of modified JOA score was reduced from 3 to 2 in one patient, but this patient was not affected by OLF progression evaluated by the difference value of CAUR >0.04. No patients exhibited any neurological deterioration due to OLF progression.

Several investigators have reported the progression of OPLL after decompressive surgery. Onari [10], Kawaguchi [11], and Matsunaga [12] observed the progression of OPLL after laminoplasty on radiographs. Using a novel CT-based three-dimensional analysis, Izumi [13] reported that an annual change in volume of OPLL of 3.33%. Sugita [14] demonstrated that the size of thoracic OPLL still increased on CT after spinal stabilization. Our study demonstrates for the first time the progression of thoracic OLF using two-dimensional measurement on cross-sectional CT.

OLF extends along the superficial layer of the hypertrophied ligament, arising from both the capsular and the interlaminar portion in which unossified tissue underneath the ossified lesions raises the ossified mass upward and toward the spinal canal [2,3]. There is no clear line between OLF and the facet joint and/or lamina, making direct measurement of OLF difficult on cross-sectional imaging. CT and MRI had been used to evaluate the grade of canal stenosis and predict surgical outcomes of OLF in several studies [1,4,16-18]. In this study, owing to the loss of historical data, a CT-based two-dimensional measurement was used to evaluate progression of OLF and we demonstrated nonoperated OLF progressed. For the purpose of reducing the effect of measurement error, repeated measurement in 15 OLF was used to find the measurement deviation. Based on the principle that differences exceeding three times the deviation were statistically significant, we defined the difference value of CAUR> 0.04 between the initial and final follow-up as the evaluation standard in OLF progression. Our results showed that the progression of OLF affected approximately 60% of patients and 33% of OLF segments, with an annual growth rate in OLF area of 1.61%.

Liu [17] and Feng [18] concluded that the residual area < 80 % can serve as a critical value for diagnosing OLF- induced myelopathy. In this study, the average value of CAUR being more than 80%, and it is possible that the progression of OLF is not enough to induce myelopathy for most patients in 5-9 years. An extensive search of the literature revealed only 2 previous well documented cases of late neurologic regression due to development of OLF in non-operated segments [5,6]. Sun [5] retrospectively reviewed 44 cases for average 8.3 years and found neurological deterioration in four cases due to the growth of OLF at the adjacent levels, which occurred at 8,10,14,14 years after laminectomy respectively. Yonenobu [6] reported 7 in 26 cases became worse after laminectomy, in which 2 cases were caused by the progression of OLF and OPLL over more than 84 months. Nonetheless, our data suggested that OLF progression was a chronic and dynamic change, and no patient suffered from neurological deterioration due to OLF progression within 5-9 years. Although neurological regression was related with progression of non-operated OLF, it may experience a long period of time and show a rather low incidence [5,6]. As a result, we concluded that preventive decompression may be worthless, and it is unnecessary to perform laminectomy on OLF segments that do not compress the spinal cord, which prevent increasing the incidence of injury and operative complications, especially OLF almost affected the whole thoracic spine in some patients. However, progression of OLF should not be ignored, and a longer and regular follow-up is warranted.

Mechanical stress is an important etiologic factor in OLF, and local kyphosis and range of motion of the thoracic spine place stress on OLF [22,23]. Postoperative development of thoracic kyphosis is associated with destruction of the posterior element [6,8]. In our study, the mean increase in Cobb angle of adjacent segments was 9.11°, significantly correlating with the number of decompressed segments. Given that thoracic kyphosis might be influenced by changes in back extensor strength [24], we consider that back muscle damage may also aggravate the kyphosis, and that this may affect the adjacent levels as well as the decompressed segments. However, we did not find a significant effect of increasing Cobb angle and OLF segment on OLF progression. It is thought that development of OLF is slow and research with larger samples is required to improve the accuracy of our statistical analysis.

Our study has the following limitations: first, low incidence of OLF and long term follow-up result in small sample size. Second, it is difficult to directly measure OLF and to evaluate the continuity of OLF using a two-dimensional method. More accurate method of OLF measurement and larger samples are required in the future.

Thoracic OLF still progress in non-operated segments, and OLF classified as immature on CT develop more significantly. Additionally, progression of OLF is not associated with neurologic regression in 5- 9 years follow-up, and it is unnecessary to perform preventive laminectomy for OLF that do not compress the spinal cord.