Background: Chronic hepatitis C Virus (HCV) infected patients are at higher risk for pulmonary artery hypertension (PAH) due to treatment with interferon (IFN) and ribavirin. The establishment of novel direct-acting antiviral agents (DAA) has revolutionized the HCV therapy. However, hardly any data exist evaluating the evidence of DAA-induced PAH. Therefore, the goal of this study was the evaluation of systolic pulmonary artery pressure (sPAP) in patients undergoing DAA-therapy for chronic HCV infection.

Methods: We prospectively enrolled forty-nine patients at our hospital undergoing 8-12 weeks of DAA-therapy for chronic HCV infection according to HCV genotype and co-medication. A transthoracic echocardiogram (TTE) was performed for assessing sPAP and right ventricular (RV) function before therapy, 8 weeks after DAA-therapy started and 8 weeks after completion of the total treatment regimen.

Conclusion: DAA-therapy for chronic HCV infection is not associated with PAH or RV dysfunction in a follow-up of 16-20 weeks.

Pulmonary Artery Hypertension (PAH) is a chronic and lifethreatening disease leading to right heart failure and death. Data from the Registry to Evaluate Early and Long-term PAH Disease Management (REVEAL registry) reported poor survival [1]. Survival time after diagnostic right heart catheterization dropped dramatically, while the one-year survival rate was 85%, the five-year survival dropped to 57%, and after seven years to 49% [1]. The incidence of PAH is generally described with 2.4 - 8 patients per million/year, while the prevalence estimates 15-30 patients per million [2,3]. Both have increased over the last two decades [4]. Registries data indicate a female predominance in PAH of around 2-4 over men for all races and ethnicities and across all ages that have been studied to date except HIV-associated and porto-pulmonary hypertension, which shows a male predominance [5]. Interestingly, female PAH patients have shown better survival than men in large registries [6].

A variety of systemic illnesses are associated with PAH, including human immunodeficiency virus (HIV) infection [7]. In contrast to HIV, hepatitis C virus infection is not clearly defined as a risk factor for the development of PAH [8]. However, HCV is associated with cardiopulmonary pathologies, such as idiopathic pulmonary fibrosis, interstitial pneumonitis, and cardiomyopathy, leading secondary to PAH [9,10]. Furthermore, HCV therapy with Interferon (IFN) alpha and ribavirin, the most common used medication for HCV treatment, are associated with PAH. IFN alpha can lead to pulmonary side effects including pneumonitis, pulmonary fibrosis, and new onset of pulmonary hypertension (PH) [11]. Therefore, the current guidelines of pulmonary hypertension from the European Society of Cardiology (ESC) have listed IFN alpha as a possible cause of PAH [8]. In addition, direct-acting antiviral agents (DAA) are nowadays used in the majority of HCV population in accordance to the current guideline ’ s recommendations [12].

The effect of novel HCV medication including DAA on PAH so far is unknown. Only some case reports indicate possible PAH secondary to DAA-therapy. However, most of the report’s present patients with additional risk factors for PAH, such as HIV-infection, portal hypertension or history of INF therapy [13,14]. Therefore, the purpose of this study was the evaluation of PAH in HCV-infected patients treated with DAA medication.

This is a prospective observational single-centre cohort study. The study population consisted of patients with diagnosis of chronic HCV infection, who underwent DAA-therapy from June 2017 to May 2019 at the Kantonsspital Olten. Exclusion criteria were inability to provide informed consent, known PAH, and dyspnoea with New York Heart Association (NYHA) classes III-IV.

The patients received a transthoracic echocardiography (TTE) for measurement of sPAP before, 8 weeks after therapy start and 8 weeks after completion of the treatment regime (Figure 1). According to current recommendations of the European Society for the Study of Liver (EASL), the patients were treated for 8-12 weeks [12]. The appropriate individual treatment regimen was chosen according to their HCV genotype and co-medications. Ribavirin was not used in this study population. First step is applying minimal traction of the atrial lead before screwing to emphasis proper attachment of the screw.

Adjudication of the diagnosis

Patients with evidence of HCV infection were included in the study. The diagnosis was determined by detection of HCV-RNA in blood serum. Testing was performed by Real-Time polymerase chain reaction (PCR) using COBAS TaqMan (Roche®) or GeneXpert® (Cepheid).

M-mode and 2D-measurements were used according to the recommendations of the American Society of Echocardiography (ASE) and the European Association of Cardiovascular Imaging (EACVI). LV ejection fraction (LVEF) was estimated by biplane Simpson’s rule. Right ventricular (RV) function was assessed by two different methods. First, by measuring tricuspid annular systolic plane elevation (TAPSE) using M-mode and second by calculation the fractional area change (FAC). TAPSE was assessed by measuring the distance of tricuspid annular movement between end-diastole and peak systole. FAC resulted from the end-diastolic (EDA) and the end-systolic area (ESA) change of the RV [15].

For measurement of the pressure gradient between RV and right atrium (RA), continuous-wave (CW) Doppler of the tricuspid regurgitation (TR) trace was utilized. The simplified Bernoulli equation

The primary study outcome was the evaluation of sPAP using TTE in patients treated with DAA medication for chronic HCV infection. The secondary endpoints were the evaluation of RV function, measured by FAC and TAPSE, as well as assessment of laboratory changes including HCV-RNA, liver enzymes, and CRP before and after treatment. Subgroup analysis were performed for sex differentiation.

Categorical variables were expressed as number and percentage, continuous variables as mean ± standard deviation (SD). For comparison of continuous variables among three groups, ANOVA (analysis of variance) was used if parametric, and a Kruskal-Wallis test was used if nonparametric. Continuous variables without normal distribution were stated as median and interquartile range (IQR). Proportions of categorical were compared using Chi-squared test. Differences were considered statistically significant at p < 0.05. All statistics were calculated using MedCalc 15 (MedCalc™, Mariakerke, Belgium). Due to the lack of data, a power calculation was not possible. We compared our study with similar studies and estimated a population size of 50 patients.

During the complete study period, 63 patients were included. However, 14 participants were lost of follow-up for several reasons (Figure 2). In total, 49 patients completed the study protocol and were included in the final analyses. 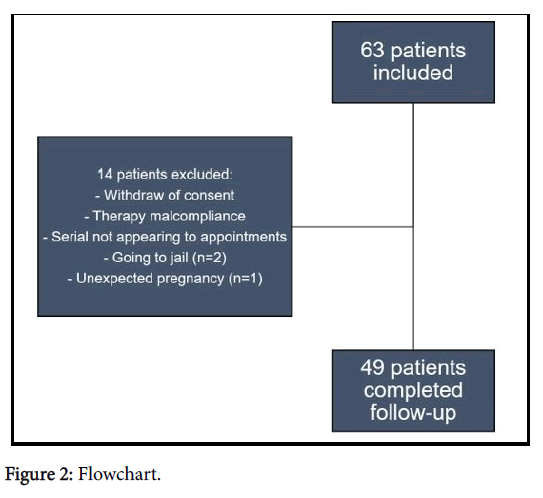 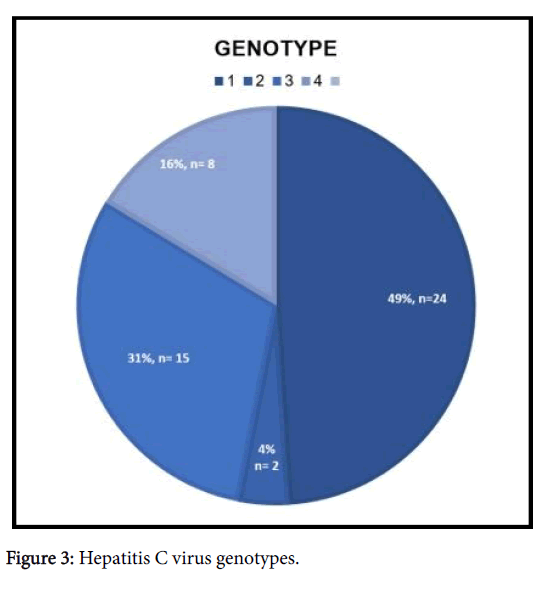 The study participants received individual DAA therapy regimes. The majority was treated with Sofosbuvir/Velpatasvir (12 patients, 25%, Table 2). All other utilized medication schemes are presented in Figure 4. Figure 5: Box-pot of systolic pulmonary artery pressure (mmHg) before, during, and after DAA treatment in females and men.

Only two runaway values were found in females. Both patients were HIV-coinfected and known for intravenous drug abuse with moderate to severe TR after recurrent endocarditis with and without embolic complications (recurrent spondylodiscitis). The etiology of the PAH was considered to be multifactorial and was observed already at the beginning of the DAA therapy. Interestingly, the estimated sPAP decreased after DAA-therapy in both patients (from 47 mmHg to 40 mmHg and from 39 mmHg to 36 mmHg).

The complete study population demonstrated a significant reduction in HCV-RNA after 6 weeks after DAA-therapy (p ≤ 0.0001). All patients (100%) showed undetectable amount of HCV-RNA directly after treatment. At a follow-up of three months, the HCV-RNA level was still undetectable in 48 patients (98%), which indicated sustained viral response. One patient suffered from treatment failure of Sofosbuvir in combination with Velpatasvir, which was supposed to be due to Y93H-mutation. A second therapy cycle of Glecaprevir and Pibrentasvir for another 16 weeks resulted in sustained therapy response.

Two patients died during follow-up for different reasons. A 55-years old man died of metastatic adenocarcinoma of the lung and the other patient, an 80-years old man, suffered from complications of infective prosthetic aortic valve endocarditis. None of them was diagnosed for PAH.

To our knowledge, this is the first prospective study evaluating systematically the evidence of PAH in chronic HCV patients using DAA-therapy. We were able to show that initiation of DAA-therapy was not associated with changes in PAH or in RV function.

DAAs have revolutionized the treatment of HCV due to a cure rate of 95-99% and a much better safety profile in comparison to interferon-based treatment [17-26]. In accordance to the current guideline recommendations [12], DAA-therapy is used in the majority of HCV patients and is better tolerated than interferon-based treatment. However, less is known about the evidence of PAH in DAA treated population. Only some case reports exist describing the correlation between PAH and DAA medication: Renard et al. have reported three cases of newly diagnosed or exacerbated PAH in patients treated with Sofosbuvir. But, all three patients had additional risk factors for developing PAH. Nevertheless, the authors concluded that suppression of HCV replication by Sofosbuvir probably promoted a decrease in vasodilatory inflammatory mediators worsening of underlying PAH.27 Savale et al. also reported three cases of newly diagnosed PAH occurring after DAA-therapy for chronic HCV infection, although two of the cases had liver cirrhosis with evident portal hypertension and possible porto-pulmonary hypertension [14].

In contrast to the reported cases, the current study could not find any significant difference in sPAP in a successfully treated HCV population. Only two female patients presented a high sPAP before beginning of the treatment, probably due to multifactorial aetiologies. Interestingly, both patients showed a slight decrease of sPAP after the treatment period and reaching viral response. Only one case report by Miyasaka et al. present a young female with improvement of the existing PAH due to HCV infection and portal hypertension after successfully treatment with DAA medication [27]. It is not clear whether the cure of the HCV infection by DAA medication itself improved PAH. Further studies are needed to verify this context.

Sex differentiated subgroup analysis for PAH and RV function were similar in men and women, only FAC was slightly higher in women already at beginning of the study. However, this finding agrees with published literature of healthy volunteers [28]. In addition, some laboratory values of the study population demonstrated sex differences. That included higher levels of Hb, creatinine, ASAT and ALAT in men. While, up to 12% higher levels of haemoglobin and creatinine due to greater muscle mass is physiological in men [29,30], the reason for higher ASAT and ALAT values is unclear. A study by Crosse et. al identified racial differences in HCV-infected patients. Black HCV patients had due to lower inflammatory activity lower ASAT and ALAT in comparison to white patients [31]. The difference in inflammatory activity might also exist between sex. However, a larger study population will be needed for further evaluation of sex differentiated PAH in patients treated with DAA.

This is the first prospective study investigating the evidence of PAH in DAA treated chronic HCV patients. We were able to illustrate, that DAA-therapy for chronic HCV infection is nor associated with PAH neither RV dysfunction in a follow-up of 16-20 weeks.

Limitation of our study is the small population size. If there might be a small risk of PAH due to DAA therapy, a greater study population might be necessary to show a significant relevance. However, in this case the clinical relevance is questionable. Another limitation is the missed comparison to a placebo group. Further limitation is the shorttermed follow-up time. A long-timed risk of late-onset of PAH due to DAA-therapy needs to be investigated in further studies.

This single-centre, prospective observational cohort study was carried out after approval of the local Ethics Committee of Switzerland and in accordance with the Swiss legal requirements, the current version of the World Medical Association Declaration of Helsinki and the principle of Good Clinical Practice.

All in the study included patients have signed a written informed consent for the analysis of the assessed echocardiographic parameters and their clinical routine data.

Availability of data and materials

Copyright: © 2019 Arenja N, et al. This is an open-access article distributed under the terms of the creative commons attribution license, which permits unrestricted use, distribution, and reproduction in any medium, provided the original author and source are credited.