Copyright: © 2015 Metgud R, et al. This is an open-access article distributed under the terms of the Creative Commons Attribution License, which permits unrestricted use, distribution, and reproduction in any medium, provided the original author and source are credited.

Aims and objective: Study comprised of 80 individuals with 20 each in every group with age ranging between 20 to 55 years. Ten linear and angular parameters were measured on lateral cephalometric radiographs. Statistical analysis was carried out for each variable using student‘t’ test.
Result: The results showed that the SN-H line and H angle was found more in skeletal class II males and skeletal convexity was more in skeletal class II female on intergroup comparison.. In the present study Rajasthan population with skeletal class II were observed to have a significantly protruded mandible. When values of Southern Rajasthan population were compared with Hold away norms, skeletal class I in the study reveal that values obtained for SK convexity, ULT, and H angle were more than that of Holdaways norms. This suggests that Southern Rajasthan population have a more convex profile and also protruded mandible with thick upper lip. Conclusion: It has been concluded that Rajasthani population standards for Holdaways analysis was found to be statistically different from other ethnic groups. Considering such standards for the studied population would aid in better diagnosis and treatment planning.

A person’s ability to recognize a beautiful face is innate, but translating this into defined treatment goals is problematic. Recognizing beauty is not practiced nor is it difficult. The perception of beauty is an individual preference with cultural bias. Rules governing why a face is beautiful are not understood nor are required for anyone to say that a face is beautiful. Artists and health professionals have attempted to define and recreate an ideal. They recognize beauty, yet objective standards are difficult, despite unending attempts to clarify this concept. As health professionals have increased their ability to change faces, the necessity to understand what is and is not beautiful has intensified. With the advent of cephalometric head films, various analyses were developed in an attempt to qualitate and quantitate esthetic facial profiles. Downs attempted to use hard tissue measurements to analyze profile imbalance to differentiate between good and poor dentofacial profiles [1].

The modern society considers facial attractiveness as an important physical attribute. Unconsciously tend to associate desirable personal qualities (such as intelligence) and social ability with attractive faces. The relevance of facial esthetics in dentistry has gained great attention in recent times. An attempt to qualitate and quantitate esthetic facial profiles. However the primary correction aimed was of the dento-alveolar structures, under the tacit belief that the soft tissue improvement would necessarily follow that in the hard tissues. However, it was realized that this did not always happen. The response of the soft tissue movement to the hard tissue could be quite variable. This gave an impetus to the development of soft tissue analyses.

Forensic facial reconstruction (FFR) is an attempt to reproduce a likeness of the facial features of an individual, based on characteristics of the skull, for the purpose of individual identification. It is often conducted by a three dimensional building up of the face on a skull with artistic clay using standard soft tissue thickness (STT) values and other anatomy based rules. Producing a face from the skull relies on the relationship between the soft tissue covering of the skull and the underlying bony features. For this, STT norms for different ethnic and racial groups have been established using Cephalometrics and most investigators have concluded that there are significant differences among these groups [3]. Hence this indicates that normal measurements for 1 group should not be considered normal for every other races or ethnic groups. Therefore, it is important to develop individual standards for each population and different racial groups must be treated according to their own characteristics.

In reference to such practical need of soft tissue evaluation, many assessment methods of soft tissue profile were introduced including [4], Holdaways (1956), Ricketts (1957), esthetic plane and Burstone’s (1959) soft tissue analysis.

Amongst which Holdaways (1983) has attempted not only to quantify soft tissue features contributing to better treatment planning, but also has addressed the main profile characteristics of the lower and middle third structures and also relates its finding to the facial upper third.

Hence this analysis was adopted in many practices in several studies to report the cephalometric soft tissue findings of different ethnicities [5]. Inspite of having different norms set for different races & ethnic groups, it has been reported that mean facial soft tissue thickness between two skeletal classes is different.

However, facial reconstruction in the forensic field uses one measure of mean thickness for each anthropometric point across all skeletal malocclusions [1].

Hence to obtain more accurate investigation results a measure of thickness of each skeletal class at point for which thickness differs significantly needs to be taken care of.

2. To compare the soft tissue parameter values pertaining to gender in between groups and within the groups.

3. To establish the tissue databases for each facial type.

TWO groups of each skeletal class comprised of 20 males and 20 females.

• Patient with class I and class II skeletal pattern.

• The images were classified into three skeletal classes based upon the ANB angle that indicates the positional relationship of the maxilla and mandible [7].

A = Deepest point on the line between the anterior nasal spine and the proshthion.

N = NASION, located on the suture between the frontal and nasal bones.

B = POGONION, deepest point from line between the infradentale (apex of the alveolar bone between the left and right lower first incisors) and pogonion (Figure 1). 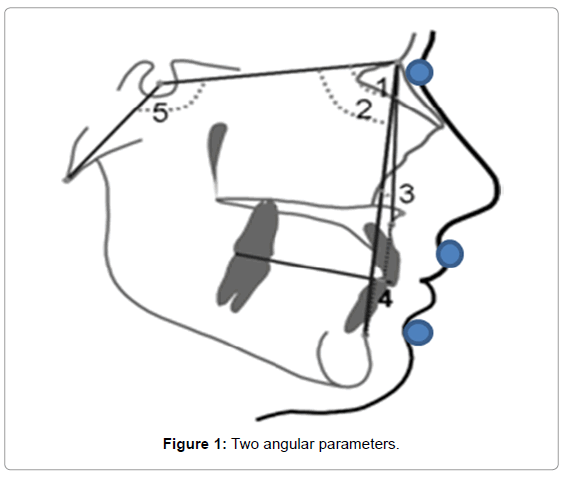 The two skeletal classes were classified as follows: Evaluation of soft tissue parameters in skeletal class I and class II (Tables 1-4).

Table 3: Comparison of soft tissue parameters within the groups.

Table 4: Comparison of skeletal Class I norms with Holdaways Norms.

Table 5: Comparison of soft tissue parameters of Rajasthan population with other ethnic groups.

Orthodontics has the cephalometric analysis as a great diagnostic aid. Since the advent of the cephalostat, many authors have focused on establishing analyses that facilitate orthodontic planning. These studies were initially conducted in Caucasians, but it has been shown that different races have different 12 cephalometric standards, thus making it necessary to establish normative values for the different racial and ethnical groups [11,12].

The results of skeletal class I in the present study reveal that values obtained for SK convexity, ULT, and H angle were more than that of Holdaways norms. This suggests that Southern Rajasthan population has a more convex profile and also protruded mandible with thick upper lip [16] (Table 5).

It is difficult to make a valuable comparison between our findings with those of other studies as various other analyses have been used to estimate STT. No studies-using Holdaways parameters, carried out in various skeletal classes, in other ethnic groups were found in the literature to compare the present study.

Hence, these results highlight the fact that a thorough anthropological analysis of the skull, including an assessment of the skeletal classes and peculiarities of occlusion, is necessary before starting a craniofacial reconstruction. A comparison between males and females disclosed that males had significantly higher upper lip sulcus depth, greater upper lip thickness and soft tissue chin thickness. Similar findings were reported [17].

Basciftci et al. concluded the difference regarding upper lip sulcus depth was statistically insignificant. Genecov et al., measured upper lip sulcus depth in relation to subnasale vertical line, also reported larger value in young adult males as compared to females. When the results of the current study were compared with those performed on other populations, similar findings were reported regarding the insignificant difference between men and women for H angle.

On the other hand, our findings regarding soft tissue facial angle disagree with those reported by Hashim and Al Baracati (16) who showed a significantly higher value in females than males.

Further studies could be carried out using much larger samples. In judging the acceptable esthetics, a bigger panel of judges including other professionals and lay persons could be employed.

Subtenly has recommended that the analysis of the soft tissue should be taken into consideration for the proper evaluation of an underlying skeletal discrepancy because of individual differences in soft tissue thickness [19].