Copyright: © 2016 Bansal S, et al. This is an open-access article distributed under the terms of the Creative Commons Attribution License, which permits unrestricted use, distribution, and reproduction in any medium, provided the original author and source are credited.

Traumatic brain injuries are an important cause of death for patients younger than 50 years of age. Brain stem hemorrhage after blunt head injury is a rare event. The relationship between the presence of brain stem injury and clinical outcome is unclear and has varied significantly. Our case highlights an uncommon case of good outcome after midbrain contusion after severe head injury.

Traumatic brain injuries (TBI) are an important cause of death for patients younger than 50 years of age [1,2]. These are associated with permanent neurologic disability and consumption of health care resources [3]. Brain stem hemorrhage after blunt head injury is a rare event. It occurs in 0.75% - 3.6% of all patients admitted to hospital with head injury [4]. The relationship between the presence of brain stem injury and clinical outcome is unclear and has varied significantly [5]. Published literature suggests that lesions in the brain stem are associated with a worse global prognosis and less probability of recovering from a vegetative state [6]. However, there is also study published by Aguas et al. [7], they stated that brain stem injury might not necessarily predict a poor prognosis, as good recovery is reported in some patients with TBI affecting the brain stem. Our case highlights an uncommon case of good outcome after midbrain contusion.

16 years male patient presented with history of fall from the bike with no helmet while driving. He had loss of consciousness after injury. There was no evidence of external injury over scalp. There was no history of alcohol intake at the time of admission. His GCS was E1V1M5 at the time of presentation. He had left hemiparesis (3/5, MRC Grade). His vitals were stable. NCCT Head was appearantly normal (Figure 1A). On MRI, contusions in left side of dorsal midbrain and right side of thalamus were identified (Figure 1B-1D). He was maintained on conservative management and nursing care. After one week of injury, he was able to open his eyes spontaneously. Nursing care continued along with Ryle’s tube feed. After about 1 month of injury, he gradually improved in sensorium and he was able to accept semisolid diet orally followed by normal diet. He was discharged in conscious state. On follow up at 2 months after injury, his GCS was 15/15, without any focal neurological deficit (Figure 2). CT head was repeated which showed resolving contusion in left side of dorsal midbrain (Figure 3). Overall he had an excellent outcome. 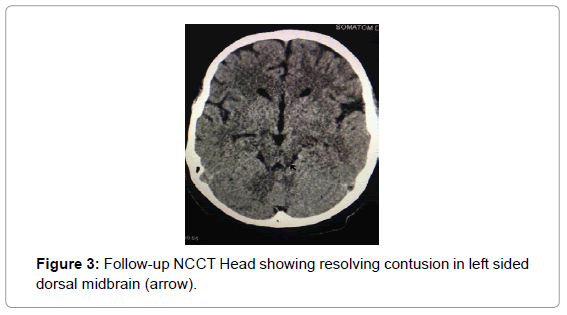 Our case had hemorrhagic contusion in dorsal midbrain along with right-sided thalamic contusion. As per literature, poor outcome should have been expected but excellent recovery of our case triggers new challenge in the evaluation of outcome of brain stem injury. Good outcome in our case may be explained by early presentation to hospital followed by supportive management thereby preventing secondary brain injury.