ISSN: 2090-4541
Journal of Fundamentals of Renewable Energy and Applications
Make the best use of Scientific Research and information from our 700+ peer reviewed, Open Access Journals that operates with the help of 50,000+ Editorial Board Members and esteemed reviewers and 1000+ Scientific associations in Medical, Clinical, Pharmaceutical, Engineering, Technology and Management Fields.
Meet Inspiring Speakers and Experts at our 3000+ Global Conferenceseries Events with over 600+ Conferences, 1200+ Symposiums and 1200+ Workshops on Medical, Pharma, Engineering, Science, Technology and Business

Copyright: © 2016 Kande SM, et al. This is an open-access article distributed under the terms of the Creative Commons Attribution License, which permits unrestricted use, distribution, and reproduction in any medium, provided the original author and source are credited.

The polycrystalline photovoltaic cell has an efficiency around 11-14%. The efficiency is low because of different factor, out of which the temperature is one of affecting factor on efficiency. The solar cell efficiency decreases with increase in temperature. So it is necessary to cool the PV panel to improve its efficiency.

Cooling of PV panel is one of critical issue during the planning of installation of PV plant. In the present work cooling of photovoltaic panel via different vegetation and water tray is carried out. The aim of this project is to optimize the panel efficiency by controlling the panel surface temperature by cultivating different vegetation below the panel. The experiment is done for polycrystalline silicon cell. The plants selected for the experimentation has a good evapotranspiration effect except aloe vera. The numerical value of increase in instantaneous efficiency is 3-4%, 1.8-2.2%, 1.2 -2%, 0.2 -0.5% for water tray, peppermint, tulsi and aloe vera respectively. The economical benefits due to cultivation of peppermint, tulsi aloe vera and water tray and also due to increase in power production from 1MW solar plant per year is forecasted has Rs. /- 455250, 436012, 219150 and 778850 respectively.

Photovoltaic cells are devices which convert solar radiation directly into electricity. However, solar radiation increases the photovoltaic cell temperature [1-3]. The temperature has an influence on the degradation of the cell efficiency and the lifetime of a PV cell. But solar cells perform better in cold rather than in hot climate and as things stand, panels are at 25?C which can be significantly different from the real outdoor situation [4-6]. For each degree rise in temperature above 25?C the panel output decays by about 0.25% for amorphous cells and about 0.4-0.5% for crystalline cells. Thus, in hot summer days panel temperature can easily reach 70?C or more. It means that the panels will put out up to 25% less power compared to what they are rated for at 25?C [7,8]. Thus a 100W panel will produce only 75W in May/June in most parts of India where temperatures reach 42- 44?C and beyond during summer season and also the electricity demand is high. However, only a fraction of the incoming sunlight striking the cell is converted into electrical energy [9-11]. The remainder of the absorbed energy will be converted into thermal energy in the cell and may cause the junction temperature to rise unless the heat is efficiently dissipated to the environment [12]. Solar cell performance decreases with increasing temperature, shown in Figure 1, fundamentally owing to increased internal carrier recombination rates, caused by increased carrier concentrations. The operating temperature plays a key role in the photovoltaic conversion process [13-15]. 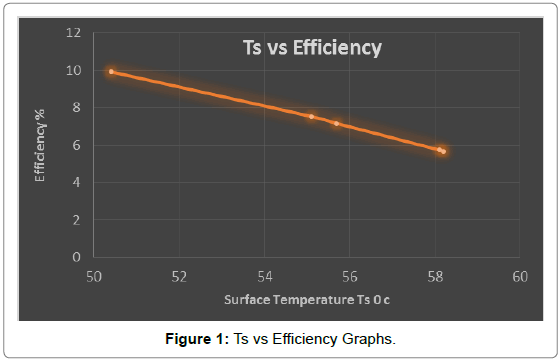 The installation of MW scale power plant will leads to keep land to be barren and it leads to soil erosion in rainy season or in windy atmosphere. So to avoid such phenomenon we can use this barren land for cultivating the specific plant which provide good cooling effect by extracting heat from PV panel [16,17]. Hence due to the cooling of panel the performance of PV plant is enhanced also by cultivating specific plant certain economics benefit can be easily achieved. By this experimental method we can improve the performance of panel and ultimately the electricity production rate will increase [18].

Effect of Temperature on Polycrystalline

The on field experimentation is needs to study actual effect of vegetation on PV panel. So due to this reason an experimental prototype is made on the college terrace.

The experimental analysis gives the on field result with consideration of all environmental factors, the methodology used during experimentation is has mention below [20],

• The selection of plant which have high transpiration rate for providing good cooling effect.

• Design of experimental setup with vegetation

• Evaluating the economic benefits of vegetation as per present market value

There are many plants available for vegetation which will grow under the shadow (under the panel). But during the selection of plant need to consider some limitation of prototype setup (Figure 2) [21]. The plant selected (medicinal plants) as per it’s economical as well as health benefits.

Main criteria consider during the selections of plant [22]:

2. Root length - As I have prepared the artificial bed for cultivation of plants.

3. Water requirement for plant growth is most considerable factors during selection of plants.

5. Soil properties. The cooling media can be classified into two categories

b) Water tray (keeping tray filled with water at the below of PV panel).

The 3- D model of experimental setup is design on Uni-Graphics. The actual setup may look like this as shown below in different view (Figure 3). 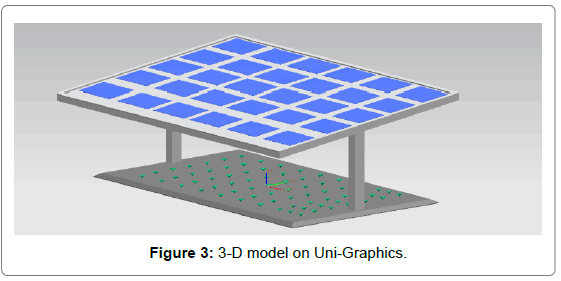 The experimental setup made on field for finding out the results is shown in Figure 4. 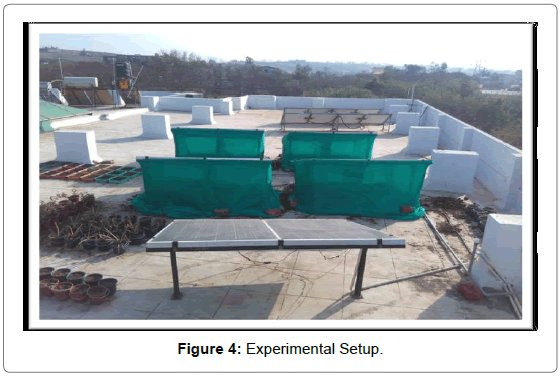 Procedure followed during testing is,

• All sensor of temperature data logger is fixed at a particular point to record the temperature of that point continually.

• The setting is set into data logger in such way that it record temperature with half hours of interval.

• For the same instant of time the radiation are measured with the help of radiation meter.

• The multimeter is used to measure the voltage and current at the same instant of time.

• All the parameter is taken at same time but there might be a 1-2 min time difference.

The load power and efficiency is calculated as,

Similarly the all calculation is done and the following table is prepared (Table 1) [23].

From experiment it is seen that cooling effect from vegetation enhances the panel performance. The result obtains due to cooling by different vegetation and water tray are tabulated and plotted. The efficiency increased by water cooling is more as compare with other setup (Figure 5). 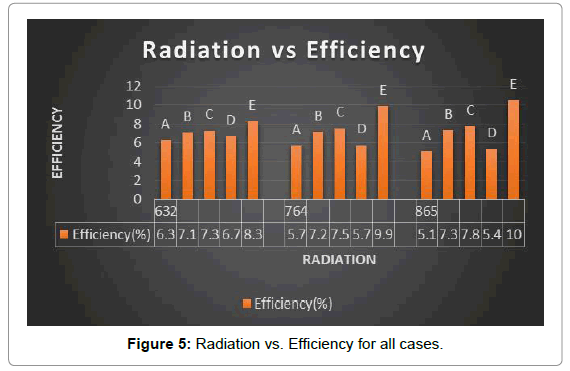 Figure 5: Radiation vs. Efficiency for all cases. 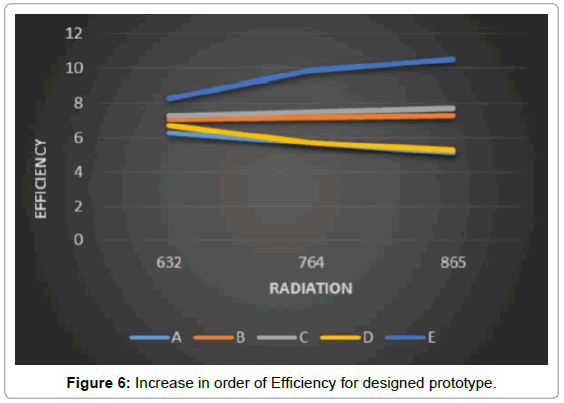 Figure 6: Increase in order of Efficiency for designed prototype.

1. The PV panel performance is improved due to the vegetation cooling.

2. Among the all cases efficiency increased for water cooling is more and which is 3-4%.

3. Aloe Vera does not give the good cooling has the efficiency improved for aloe vera is only 0.2-0.5 % because, aloe vera mainly grown in desert area it has characteristics of holding water for their survival.

4. As seeing the panel surface temperature (Ts where it is recorded) of panel if cooling is obtaining up to 1?C the panel efficiency will increase up to 0.33 -0.45%.

The graph plotted below show that there is increase in efficiency due to cooling via vegetation at the same radiation as comparing with empty model (A) [7,8] (Figure 7). 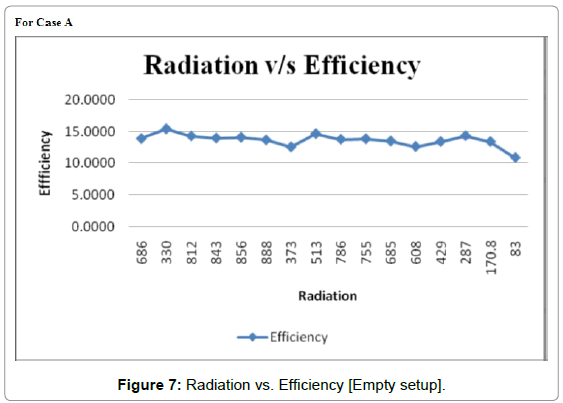 From above graphs plotted for empty case A show that the maximum efficiency obtain is near about 15 %.The panel surface is increased with increase in radiation level, as it starts increase above its rated temperature the efficiency goes on decreasing (Figure 8) [9-11]. 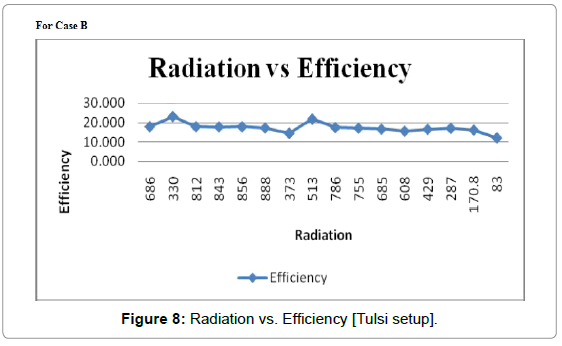 The panel surface is increased with increase in radiation level, as it starts increase above its rated temperature the efficiency goes on decreasing. But due to the vegetation cover of tulsi under the panel it leads to a near about constant temperature inside the chamber. The graphs plotted for case B is clearly indicate that there is increase in efficiency doe to tulsi cover below the panel at same radiation as for empty case A. The maximum efficiency obtain is 22% (Figure 9) [12]. 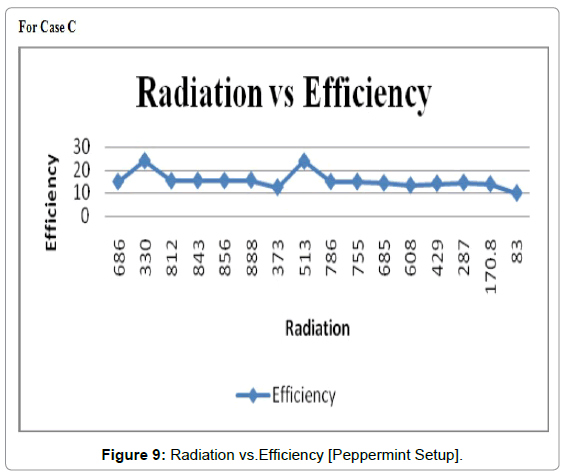 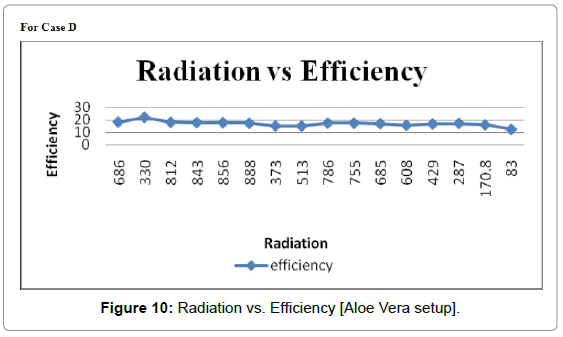 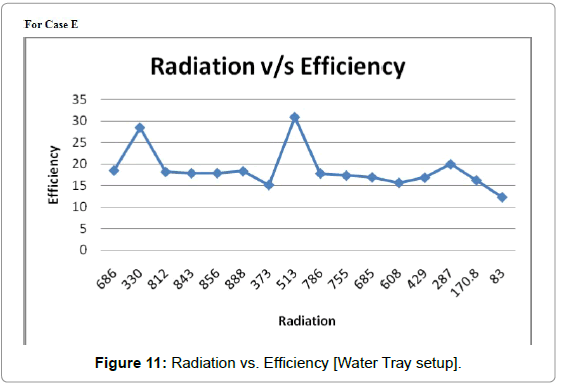 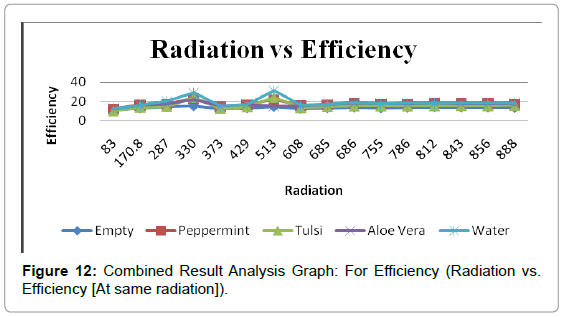 The graph between Ts vs. Radiation clearly indicates that if there is increase in radiation will increases surface temperature of panel. Also it is possible to enhance the efficiency of panel due to cooling them by various cooling media likes vegetation and water tray as experimented in a project. The graph between radiations vs. efficiency show the increase in order of efficiency for various cases is Aloe Vera, Tuli, Peppermint and water tray.

From all the above graphs and discussion it is concluded that the vegetation can made very good impact on panel cooling. The cooling effect due to vegetation enhances the panel efficiency as well as it will help to maintain surrounding temperature cool. For the same radiation the water tray case gives more increased in efficiency. On the graphs there are some pick out due to cloudy environment [17].

For different radiation the surface temperature versus efficiency is plotted, the graphs show that with increase in temperature the panel efficiency goes on decreasing. The temperature profile as a constant nature during 48 to 53?C and is slightly drop during next zone as shown in below graph (Figure 13) [24]. 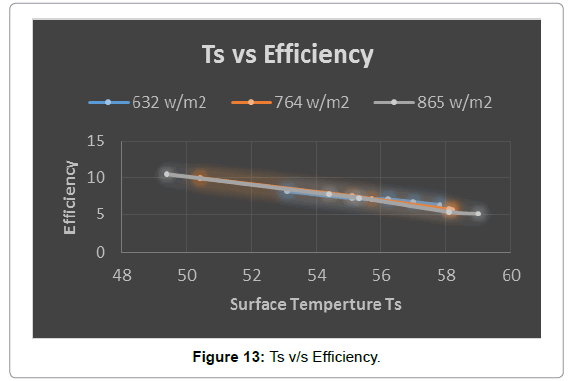 It has been proved by practical experimentation that the vegetation gives the cooling effect under the PV panel, which leads to increase panel output power. The increase in power increases the unit generated per year which add the additional income into the existing income coming from power production also the by selling the medicinal plants parts (leaves, flower etc) will also add into the total income. The economical analysis is carried for the experimental setup as well as for MW scale power plant [25] (Table 2).

Table 2: Benefits obtain in Rs. /-per year from experimental setup.

As the bar chart (Figure 14) clearly indicates that the benefits obtain in terms of money is more from the set of PV panel below which water tray is kept, as the water evaporation rate from open tray is more so it will cool panel at optimistic value which leads increase more number of k-Wh [26]. Also the peppermint and tulsi gives appropriate benefits comparing with their initial capital investment. So when we cultivate such vegetation under PV panel for MW scale plant it will give income in both terms, also it will help to maintain environment cool (global warming effect) [27]. 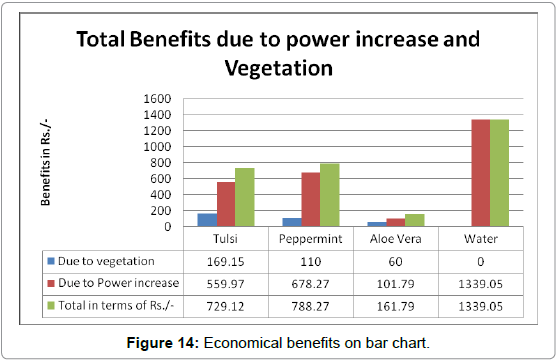 1. The increase in temperature will decrease the efficiency; it has linear in nature with efficiency.

2. The efficiency is increased due to different type of vegetation and water tray, among of them water tray gives the highest efficiency.

4. As the decreasing panel surface temperature by 1?C the panel efficiency will increase up to 0.33-0.45%.

1. The temperature data recorded as error of 1-2 degree Celsius due to sensor cable resistance.

3. The vegetation needs water so such cooling phenomenon creates the problem in the area of low water zone.

4. Need to select the plant having long life span.

• If the water bodies are available then install the PV panel above the water body as they provide very good cooling.

• The area where we want to setup PV plant; if the water quantity available up to appropriate level then cultivate different type of vegetation suitable for that land. It will increase the annual income.

• But the area like Latur, Beed, etc. they have the problem of drinking water so for such area need to find out some alternatives for panel cooling.

The authors want to thank the department of Energy Technology, Shivaji University, Kolhapur, for providing lab support and testing equipment.