Experiments on Vibration Mitigation with a Mass-Spring-Series Model

Copyright: © 2016 Kuo CM, et al. This is an open-access article distributed under the terms of the Creative Commons Attribution License, which permits unrestricted use, distribution, and reproduction in any medium, provided the original author and source are credited.

A mass-spring-series model was assembled and tested using displacement-controlled vibrations in order to validate the effectiveness of vibration mitigation in a floating slab track. A mass mounted with an accelerometer was isolated with a spring from the vibration source. The other end of the mass was also connected with a spring to the fixed end. The spring coefficients and natural frequencies of the mass-spring combinations were carefully measured and verified. The time histories of the vibration amplitude indicated that properly tuned combinations of mass and springs effectively retain vibrations in the designated mass and reduce propagation and reflection. It was determined that using a stiff spring to confront the excitation source and a soft spring as a foundation isolator may alleviate vibration propagation and reduce vibrations reflected to the excitation. The drawbacks of the experimental design were also discussed.

hw - spacing of the axles in a bogie

Mvs -mass of a car body

Global warming has made railway transportation increasingly popular because of it is energy efficient and produces relatively few emissions. Railway technology has evolved, resulting in improved mobility and comfort and an attractive, modern, sustainable transportation option. However, expansion of the railway network has also caused environmental concerns. Vibration and noise have major impacts near railway and transit routes. For example, the Taiwan high speed rail passes through the Tainan science-based industrial park (TSIP), one of Taiwan’s major wafer fabrication bases, causing leading companies to hesitate to invest in it. The Taipei mass rapid transit system has also faced vibration problems because the Xinzhuang-Luzhou line passes through vibration sensitive areas. Although railway agencies have conducted several research projects on the impact of vibrations on the hi-Tec industrial park, and have adopted a floating slab track, mechanisms employed in vibration mitigation methods require further verification, calibration, and maintenance. A mass-spring-series model was set up to verify the vibration loss associated with various springs. The natural frequency of each mass-spring combination was validated. The idea of trapping vibration in track slabs was tested and discussed. These tests are essential for linking theoretical analysis and practical effectiveness. The experiences that resulted from the tests, as well as the results, are both crucial foundations for future research into railway track vibration mitigation.

Winkler studied railway structures in 1867 assuming the supporting medium to be independent springs without shear transmission across adjacent springs [1,2]. Hetenyi [3] presented analytical solutions for static loadings on an elastic beam supported by Winkler foundations. Frÿba [4] formulated dynamic models that revealed the dynamic characteristics of moving loads. The models were further improved by introducing moving suspended masses and contact theory, which revealed the coupling effects of various vehicle parameters and speeds [5]. There are many advanced formulations that consider track components in various levels of detail. For example, Hussein and Hunt [6] and Yuan [7] proposed a double-beam system and a complete treatment of the analysis to evaluate interactions between rails and track slabs.

times the natural frequency of the isolation system. However, vibrations with frequencies lower than the threshold might be amplified to some extent. Floating slab track (FST), which basically consists of concrete slabs supported by resilient elements, such as rubber bearings, has been used on modern rail transit systems for years [8]. This design aims to reduce vibrations transmitted to the supporting foundations and surrounding areas. The concept was pioneered on the Washington D.C. rapid transit system (WMATA) in the 1970’s. The WMATA’s floating slabs are continuous concrete slabs broken only by required construction joints spaced at 18.3 m. Later, in the 1980’s, Toronto and Hong Kong’s rapid metro systems installed floating tracks consisting of 1.45 m short slabs. Even shorter slabs were used in the Hong Kong airport express and west railway in the late 1990’s. Floating slabs can be continuous if they are cast in-situ, and may be discontinuous if they are constructed in discrete precast sections [9]. Although many studies have reported their effectiveness, the FST remains a controversial method for underground railways because of interactions with the tunnel and the surrounding soil [10]. For example, dynamic loads may occur on wheels passing through gaps between slabs., Significant dynamic force may arise at the wheel-rail interface for heavy axle masses and high-speed trains. Forrest and Hunt [11] studied the effectiveness of floating slab systems and found that isolation is not satisfactory at frequencies as low as predicted by simple theory. Any reductions are modest, and there are some positions around the tunnel at which resilient slab bearings caused increased responses at higher frequencies. Balendra et al. [12] also found that low frequency vibration on floating slab track is more significant than it is on direct fastened track. In addition, experience has shown that the maintenance costs are high and that the quality of the train rides are unsatisfactory [13].

An analytical model for FST can be found in a study of Singapore’s rapid transit system [14]. In the meantime, Crockeet and Pyke [15] evaluated the vibration mitigation of floating slab track on viaducts with the finite element package ANSYSs. Recently, Hussein and Hunt [16] derived a three-dimensional model of a deep underground railway tunnel with floating slab track based on the Euler-Bernoulli beam theory. In 2006, Lombaert et al. [17] developed a numerical model to investigate the reduction of free-field vibrations by a floating slab track. They focused on the how dynamic track-soil interaction affected the performance of the floating slab tracks, and concluded that the insertion loss varies with the stiffness of the soil [17]. Although the studies reviewed above shed light on several characteristics from different aspects, in-depth studies that explain the effects of FST on track itself have yet to be completed. Kuo [18] derived and solved a coupled system of floating slab track and wheels with suspended mass to explore the effects of floating slab track on track itself. The study found that the stiffness of slab bearing and slab mass effectively alter rail vibration levels at frequencies above 20 Hz. The authors suggested that a proper combination of stiff rail fastening and soft slab bearings could take care of both environmental vibration and excess rail responses. They presume that the vibration energy might be trapped in the layer of track slabs. Simple mass-spring models have often been used to observe and evaluate insertion losses in isolation systems and to validate design concepts. Jones [19] suggested that soft mats under sleepers may be a useful countermeasure above 20 Hz. Nelson [20] conducted model tests with soft fasteners and achieved 9-12 dB reductions above 30 Hz. A well-designed vibration mitigation method should not only reduce outspreading vibration, but should also prevent the energy from bouncing back to the train. This paper describes laboratory tests done on mass-spring-series models that validate the innovative “stiff rail fastener and soft slab bearing”.

Setup of the Mass-Spring-Series Model

The “stiff rail fastener and soft slab bearing” was based on the system shown Figure 1, which was formulated using Eq. (1) to (7). The Eq. were solved and validated to reveal the influence that the stiffness of rail fasteners has on floating slab bearings [18]. The study revealed that FST might cause more severe vibration in rails if the stiffness of the rail fasteners is not tuned properly. The analyses illustrate that stiff rail fasteners accompanied by soft FST bearings significantly reduces vibration amplification in rails, as shown in Figure 2. Consequently, the vibration energy seems to be trapped in the layer of track slabs. Although further effort is needed to relieve vibration in track slabs, this idea is still useful for track work designs using FST and other vibration mitigations.

In order to confirm the idea of “trapping vibration”, a mass-springseries model was developed to simulate the track system, as shown in Figure 3. Since the testing machine, an Instron 8800, exerts force through the bottom clamp, the mass-spring series resembles an upside down model of a track structure. The force output of the testing machine can be up to 100 kN force at 2.5 Hz. Figure 3: Setup of the mass-spring-series model.

Different combinations of rail fasteners and slab bearings were assembled with three sets of springs. A spring set composed of four identical springs was welded onto the corners of steel plates. The steel plates were designed for connection with a steel mass or a clamp from the testing machine. The spring coefficient of each set was obtained using an Instron 8800, as shown in Table 1. The calibration equipment is shown in Figure 4. Spring set A is the stiffest and spring set C has the lowest spring coefficient. 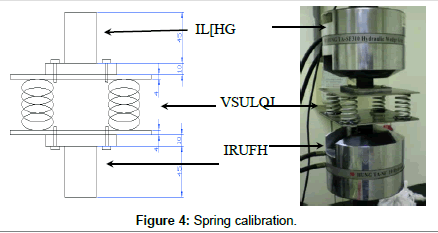 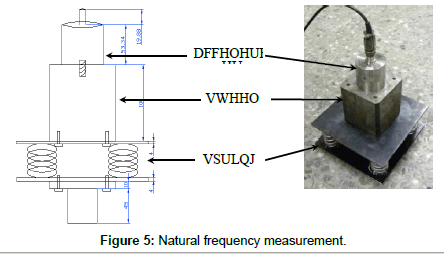 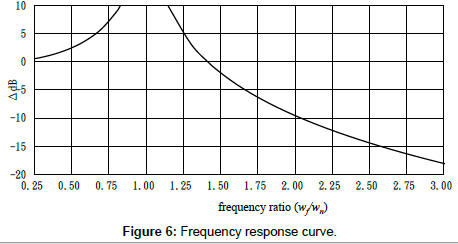 As a rule of thumb, the mass of a spring’s vibration in a massspring system is one-third of the mass of the spring. The masses of all components in this study are listed in Table 3. Table 4 compares the measured frequencies and the calculated frequencies, including one-third of the mass of a spring set, as shown in Eq. (8). The frequencies matched well for all six cases, with an average error of 0.97%. The mass-spring-series models were assembled by connecting steel mass A, steel mass B, and a clamp, with each spring sets. The characteristic frequencies of the series models were calculated as shown in Table 5.

By changing the top spring and bottom spring in Figure 3, six models were tested by applying a 2.5 Hz sinusoidal force with 1 mm amplitude. The results were interpreted in two ways. First, the effectiveness of the rail fastener on the vibration of the track slabs was examined, as shown in Table 6. All comparisons demonstrated that a stiffer bottom spring (resembling a rail fastener) results in significantly larger vibration amplitude. That is, wheel-rail impact induced vibrations are more likely to pass through stiff rail fasteners and cause larger displacement in track slabs. The other methods of comparison focused on slab bearings. Table 7 illustrates that a stiffer top spring (resembling a slab bearing) results in smaller vibration amplitude in the mass (resembling a track slab). In other words, although soft bearings may isolate vibrations from propagation to foundation, they tend to retain vibration energy in the track itself. Both comparisons qualitatively validate an effect that suggests that a soft spring may keep vibration energy on the side of the excitation and reduce displacement on the received side. Based on this concept, track slabs on the receiving side of rail fasteners experience more severe vibrations when they are underneath softer rail fasteners. On the other hand, the track slab is source of excitation for slab bearings and subgrades. It is reasonable to expect to observe more severe displacement of track slabs on softer bearings.

* stiffer fastener in the case; + higher vibration amplitude in the case

Table 6: Effectiveness of a rail fastener on vibration amplitude.

* stiffer bearing in the case; + higher vibration amplitude in the case

A mass-spring-series model was set up to validate “trapping” vibrations in track slabs to avoid reflecting the vibrations back to rails and propagating vibrations to the foundation. Spring coefficients were measured and the basic natural frequencies were calibrated through tests and theoretical calculations. The major findings are as follows: