Copyright: © 2015 Yang L, et al. This is an open-access article distributed under the terms of the Creative Commons Attribution License, which permits unrestricted use, distribution, and reproduction in any medium, provided the original author and source are credited.

A simple and easy method is demonstrated for the fabrication of liquid molds which was used for the fabricaion of bio-polydimethylsiloxan (Bio-PDMS) mirofluidic devices based on a novel drop-on-demand (DOD) printing technology. The liquid molds were DOD printed well on the hydrophilic glass substrate which was treated with a TiO2 nanoparticles (TiO2NPs) solution at the overlap of 30%. Then the PDMS concave molds were fabricated well by being replicated from the liquid molds and were bonded with another PDMS substrate to form a Bio-PMDS mirofluidic device. The micro-channel which the width and the height were about 100 μm and 8 μm was fabricated and the surface roughness of the micro-channel with the 100×320 μm2 area was about 179 nm measured by a white light interferometer. The experimental results showed that the width of micro-channel in the Bio-PDMS microfluidic device was small and the surface of the micro-channel was smooth.

To date, there have been many methods developed to fabricate master molds in bio-PDMS mirofluidic devices such as, UV exposure, ice-water patterning [6], the etching of copper, liquid molding on paper [7] and wax printing on paper [8]. However, most of these methods have some limitations, making the fabrication expensive, complex and not easy. The UV exposure on photosensitive polymers needs photomasks and organic solvent [9], and the equipment was complicated and the fabrication must be carried in an ultra-clean environment. The etching of copper required masks and additional etching steps [10], and the solution needed in the fabrication was toxic. Liu X fabricated PDMS micro-devices with a “liquid-molding” method [11], but however, the process is complex and difficulty. Because the method needs to photo-lithographically fabricate micro-patterns on a silanized glass substrate to form hydrophilic/hydrophobic surfaces and to fabricate 3D patterns of a liquid via dip-coating the substrate in a polar solution. We prepared a PDMS microfluidic device based on drop-on-demand generation of wax molds [12], in which the wax droplets were dispersed on the substrate to form the wished patterns at the desired times and positions without contact with the substrate. However, the surface of the micro-channels in the micofuidic devices was rough and the width of the channel was large.

In this paper, a new droplet-on-demand printing method [13-15] was described to fabricate liquid molds which were used in Bio-PDMS microfluidic devices on a hydrophilic glass substrate using a glycerol solution. The liquid droplets were ejected from a glass micro-nozzle onto the glass substrate based on microfludic pulse interior force to form different liquid molds. Finally, the depth, the width and the surface roughness of the micro-channel were characterized.

Glycerol AR was purchased from Sinopharm Chemical Reagent Co., Ltd. Sylgard 184 was supplied by the Dow Corning Corporation. The TiO2 nanoparticals(NPs) with the diameter of less than 4 nm was purchased from Shenzhen jing cai chemi cal co.,ltd. The borosilicate glass capillary (1.0 mm × 0.6 mm ×100 mm) was purchased from Beijing Zhengtianyi Scientific And Trading Co., Ltd. The micro-nozzles used in this paper was made by a Microelectrode puller (MODEL P-2000) and a platinum resistance wire (MF-900.NARISHIGE) with the borosilicate glass capillary to get the outlet inner diameters. Figure 1 shows the fabrication process of the micro-nozzles with the platinum resistance wire in four steps. Firstly, the glass capillary tip was placed above the glass micro-ball. Then the glass micro-ball was heated by controlling the voltage and the tip was cut off at the desired position. Afterward, the tip was placed in front of the glass micro-ball. At last, the tip was forged to form a micro-nozzle by heating the micro-ball through controlling the voltage. In the DOD printing system, as is shown in Figure 2, a glass micronozzle filled with the 50% glycerol solution is fixed with the PZT actuator through a connecting device. The liquid in the micro-nozzles was jetted on the glass substrate to form liquid droplets with different diameters by the pulse inertia force supplied by a PZT actuator. The glass substrates used in this paper were hydrophilic treated by TiO2 NPs solution. The higher the TiO2 NPs concentration is, the more hydrophilic the substrate is. The liquid lines can be formed on the hydrophilic glass substrate by changing the overlap of the liquid droplets using a computer-controlled motorized X-Y worktable. Figure 2: Schematic of liquid jetting system based on the digitallization of microfluidic technology. Figure 4: Micrographs of the liquid droplets with different diameters.

After fabricating liquid molds on the hydrophilic substrates, the PDMS concave mold and the Bio-PDMS microfludic device were fabricated in several steps as above (Figure 5). Then, the characters of the concave mold were measured. Figure 6 shows the SEM photo and the three dimensional surface profile of a PDMS micro-channel replicated form a liquid mold. The width and the height of the channel were about 100 μm and 8 μm. The surface smoothness of PDMS microchannels replicated form liquid molds was measured by a white light interferometer. The surface roughness of the micro-channels was about 179 nm, as is shown in Figure 7. The surface of micro-channels fabricated in the Bio-PDMS microfluidic device was smooth. 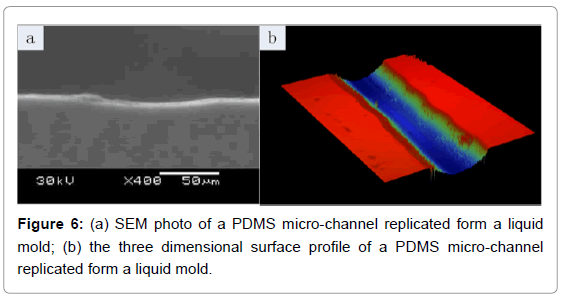 The experiment results showed that based on the drop-ondemand technology, the glycerol liquid could be jetted steadily on the hydrophilic glass substrate, and the diameter of the liquid droplets was controlled by the outlet inner diameter of glass micro-nozzles, the driving voltage and the driving frequency of the microfluidic system. With the overlap of 30% on the hydrophilic substrate, the liquid line seemed to be well formed. After that, the PDMS concave molds for Bio-PDMS device were well fabricated. The width and the height of the micro-channel were about 100 μm and 8 μm. The surface roughness of the micro-channel was about 179 nm. The liquid molds printing system is simple structured, the glass micro-nozzles are easily fabricated and low cost. This method suggests a novel path which is easy, inexpensive and portable in the area of biological microfluidic devices fabrication.